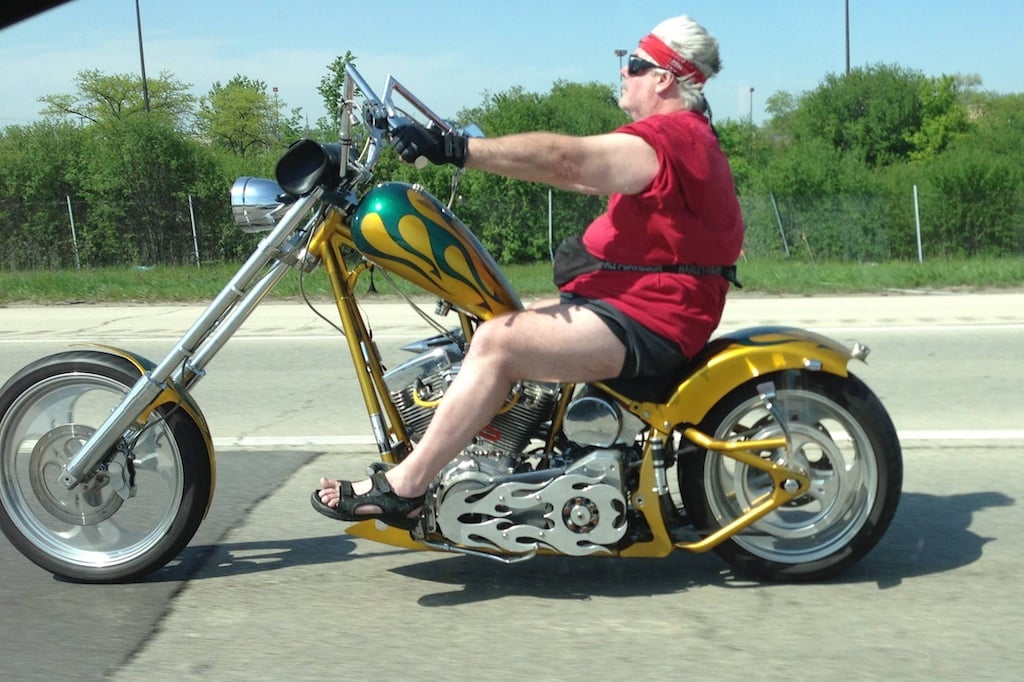 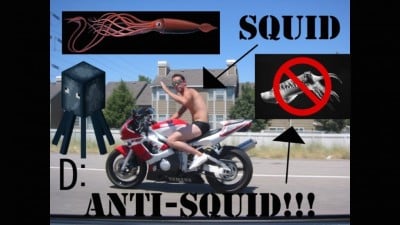 The Motorcycle Squid. Discussing various ideas of them was once pure fun.The Squid in traditional motorcycle jargon was simple to define. A few quick examples: the one who had a sportbike with an extended swingarm (95-percent of the time a Hayabusa); the cruiser one donning a sleeveless shirt with skulls; the one wearing Harley-Davidson from head-to-toe and piloting a “Jap” bike; the one wearing flip flops and shorts on a literbike.These tags arrived from various people throughout my years of riding, and I don’t necessarily like these descriptions, considering everyone riding is a friend – none are my personal opinion of a Squid.Also, notice the use of “one” here – a Squid was never genre specific, and people have Squid terms for both men and women. But social-media hype has brought the “fun” out of Squid talk, and created some very unsafe riding habits. How many times have you observed via video a woman wearing a skinny bikini who was riding some pre-21st Century sportbike that looked like it was puked on by the Gods of Chrome. Road rash prone? 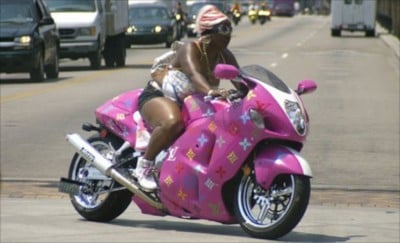 My idea of a Squid? The internet new-age Squids who teach bad riding habits and completely disregard safety. And this disease continues to spread from coast-to-coast in the USA, and – to a lesser degree – across Europe.In America, this disease is nearing epidemic proportions due to outlets like Facebook and Google+; social media is spreading new-age Squidom rather quickly. And let’s not forget the celebrity influence of riding habits such as a glove-less Justin Bieber piloting a Ducati 848EVO.Let’s quickly examine one smaller segment that has its share of new-age Squids – one that bothers me more than the others – track day riders (note – not track-day enthusiasts or serious racers). Some of these “track day riders” spend more time on social media bitching about things instead of actually learning about them, and these ones bitching are usually slow-ass riders, though there are always exceptions.From hard parts to gas, it’s always endless conversations between a few new-age Squids trolling thousands of social media pages. There are guys that don’t understand correct body positioning or the simple things like looking where they want to go, but carry on endless negative conversation about things like what bodywork is better than others or what grips to use. Some even discuss what fuel is best, though it’s more of a smell thing rather than a high-compression engine thing. 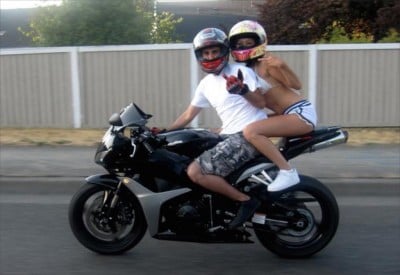 Due to my work, I observe this Squid talk daily, but rarely interact. Why? It’s easy to get sucked into Squidville and waste massive amounts of time there. This is time that could be spent doing what I do daily – writing about motorcycles. Or perfecting technique by reading about technique from guys who truly know technique – the professionals from credited racing schools and those with racing titles, not the internet Squid with a few track days under his unworn leathers trying to exploit a wrong idea rather than nurturing a correct idea.I always warn my friends about getting wrapped up in this never-ending cycle of Squid Social Media, though, I admit, it’s truly entertaining. But one must know when to close the browser or at least open a new window.Motorcycles are my disease, and my passion resides in learning how to ride faster and safer across many disciplines – not entertaining myself with what others are bitching about. I’m surely a Squid to some – the type who respects my fellow riders and dons gear head-to-toe.My utmost love is for sportbikes and the track (hence my absolute disgust at track-day squids), though my goal is far away from anything circuit like; my mission is conquering Pikes Peak International Hill Climb (PPIHC), not achieving a CCS or WERA title. The latter two is loaded with talent, but a few riders are quite Squidy. But Squidness is extremely rare in the smaller classes where competition is high and cost is low, such as Lightweight Twins. Add dollars to any sport, and the upper class will surely triumph over the lower class. 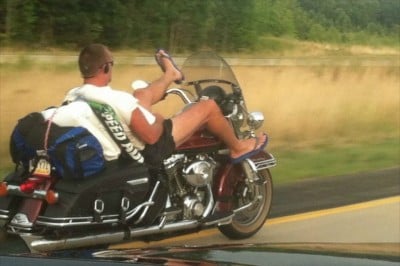 But so far my experience at unique events such as PPIHC was void of Squids. While testing a Kawasaki Concours 14, I rode last summer from Pennsylvania to Pikes Peak to check out the scene (and drink beer with Guy Martin, which sadly never happened), and I did not encounter one Squid in the motorcycle sector. As for the car sector, well that’s a much different story.My next angst against Motorcycle Squidom resides in the world of big-bike Adventure riding – and I mean true ADV riding – street-legal knobby tires and single tracks. Piloting bulky ADV bikes off road requires technique that is 100-percent opposite of road racing. And it’s fun to rip ass on the street – nothing beats passing a Squid sportbike rider while throttling by aboard an ADV bike clad with knobby tires. You read endless online conversations between some of these ADV guys, discussing bad ideas that will surely lead to bad crashes.These are things a Social Media Squid has trouble with because too much time is spent having orgasmic online fingers. The Anti-Squid learns two-fingers on a clutch and friction control; the Squid, how to use fingers to quickly ask his/her fellow social-media companions who to keep his/her new powder-coated skid plate dent free. 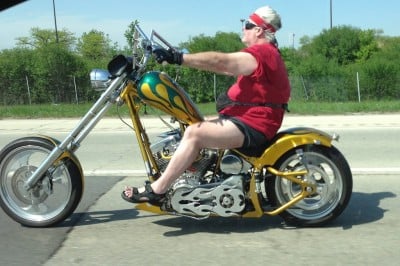 Then there’s the stereotypical internet Squids among cruisers and sportbikes. Take the cruiser genre – it’s loaded with online Squids who present the #1 stereotype of an image popularized during the rise of the Baby Boomer – the bad-ass wannabes with enough money in leather, studs, chrome and loud exhaust to fund the local WIC program, but ride with bald tires. And watch out for the ones with “Sons of (enter your state here)” shirts who were flip flops.Nothing negative here about the style, but safety should be up front over the nonsense. Picture yourself riding behind a guy with bald tires, and he loses it and causes you to crash.Then the sportbikes. Studs and chrome again, but also muscle t-shirts and shorts and ones who can ride wheelies forever but can’t corner. Oh, the sportbike online Squids who talk about “chicken strips” – this is the ongoing conversation for decades, and sadly, many Squids crash trying to scrub off these conversation makers more than anything. And it’s all BS. Learn body position and you’ll use more of your tire to go faster through a corner.And don’t get me started on the street Squids and few track riders trying to get elbows down. Leave this to the fastest riders in the world who actually use elbows to their advantage such as Marc Marquez; I bet more track riders crash trying to get an elbow down rather than using an elbow to save a crash. There’s even squid videos out there of riders that scrape their helmets off the track during excessive lean angle. Sensationalism at its best? You bet – and the viewer hits continue to build. I must admit, though, I fell into Squidville – the video was kind of cool.From an industry standard, these new-age internet Squids across all disciplines of riding – as a collective group – slow down things tremendously. These are the riders who don’t learn correctly – usually due to taking advice from a fellow Squid – and end up crashing themselves, or their advice causes others to crash. 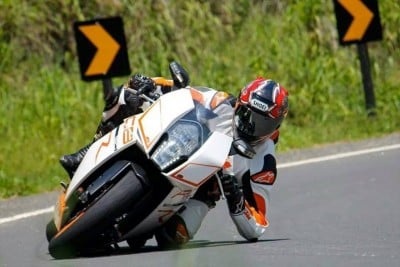 Many of these riders have no clue why they crashed, but more importantly, don’t care to learn why. The true motorcyclist – the Anti-Squid – examines these crashes, and attempts to fix things. Only then can one further explore the true freedom of riding. But not in Squidville; instead, they use Squid-learned mentality, saying “it’s just not for me” or “it’s just too dangerous,” or blaming other motorists saying there are “just too many cars out there.”And when every Squid exits motorcycling – instead of learning the way of the Anti-Squid – the industry as a whole dwindles. The more exits, the less growth, meaning less sales of motorcycles, and everything that naturally goes with motorcycles, including gear, hard parts, accessories, and, of course, industry magazines.Social media has united the New-Age Squid tenfold – and it’s only getting worse . We must put a stop to this by abolishing the new-age Squid; let’s educate fellow riders, and get potential Squids truly enjoying the sport for themselves. And while at it, let’s have all riders not worry about what the others think – or how the others ride. Everyone learns differently – some slower than others, some faster. The only route to true safety (and speed for those who want it) is through discipline to constantly learn and evolve. And of course, learn from the experts – not the Squids.Note from editor: The pictures in this article were gathered from various social media sites, and in by no way feature anyone on the staff of Ultimate MotorCycling. 🙂