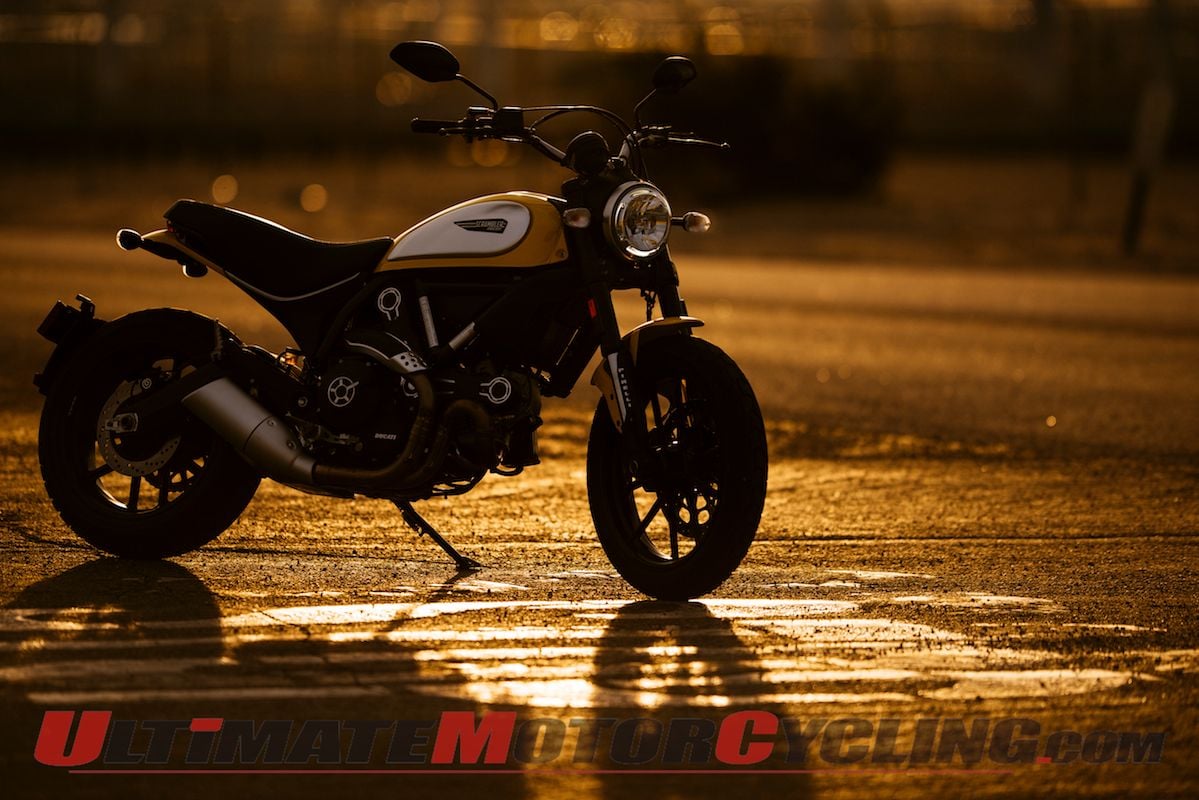 2015 Ducati Scrambler ExposedWith the arrival of the 2015 Monster 821 – a snappy liquid-cooled naked worthy of 112 horsepower and a $10,995 starting price – it appeared Ducati’s entry-level motorcycles were on the brink of existence.These thoughts were further exploited when Ducati dropped all air-cooled Desmodues from its Monster lineup.But while this Monster transformation was occurring, the Borgo Panigale-based manufacturer was also hyping its new Scrambler. And when the details were finally released in late September, the Scrambler took over as the lowest-priced, entry-level 2015 Ducati available.But Ducati surprised when it released not one – but four versions of the Scrambler, which was a rebirth of a popular model available in the 1960s and early 1970s. Now, the bike was more than just entry level. It helped develop a new culture in the world of the 21st Century Ducatisti who seeks styling over performance.But that’s not saying the Scrambler doesn’t arrive with performance. Styling aside, the Scrambler is loaded with typical modern-day Ducati performance, such as the Desmodue transplanted from the Monster 796 that produces 75 horsepower at 8250 rpm and 50.2 ft/lbs of torque at 5750 rpm. In the Monster 796, this engine engrossed a charismatic character that was optimal for real-world streetability – and it repeats this in the Scrambler.The Scrambler arrives with a twin-spar steel trellis frame, wide handlebars, and a generous 56.9-inch wheelbase. This combination provides agility around town while remaining stable at speed.Suspension duties are handled by Kayaba, the Scrambler using a 41mm upside down stanchion fork and a monoshock with adjustable preload out back. The Scramblers roll on 10-spoke aluminum wheels with a classical flat-track design. These wheels are shod in Pirelli MT60 RS tires – a 110/80 ZR18 up front, and a 180/55 ZR17 out back.Like all modern Ducatis, the Scrambler features a Brembo braking system; it utilizes a single 330mm disc up front squeezed by a four-piston Brembo monobloc radial-mount caliper, and a single 245mm disc griped by a single-piston caliper out back.The Scrambler also arrives with a two-channel Bosch ABS system – the only high-tech electronics found on the motorcycle.Ducati recently released some new photos of the Scrambler, which are attached above. For a test, visit our 2015 Ducati Scrambler First Ride Review.