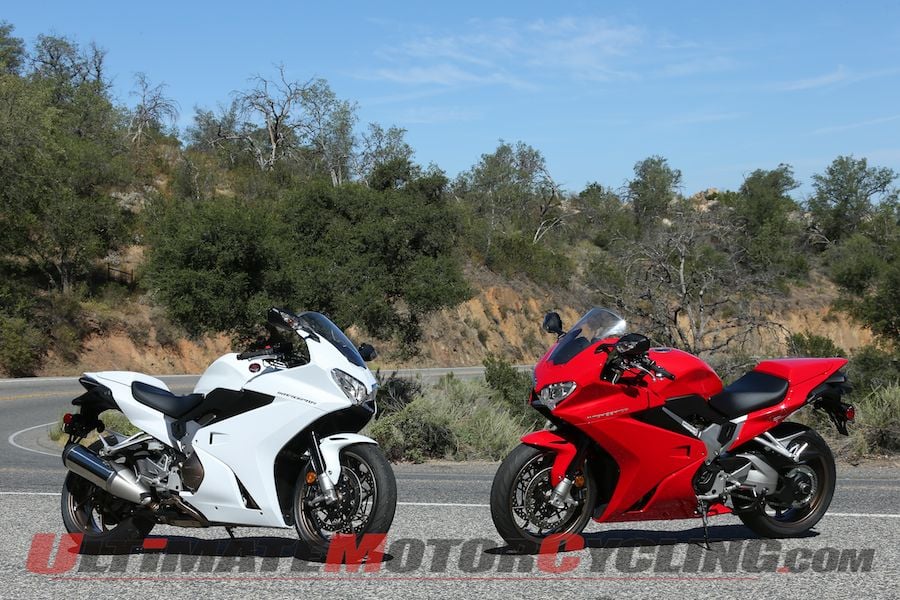 2014 Honda VFR800F Photo GalleryFollowing a three-year hiatus in the states, the Honda VFR800F (Interceptor) returns for 2014. The “Viffer,” which was replaced in America by the VFR1200F from 2010-2013, arrives with much refinement over the previous-generation model.The 2014 VFR (Vee-Four Road) went on a major diet, the machined powered by the 782cc liquid-cooled 90-degree V-4 losing 22 lbs. The revised model also arrives with LED headlight, more aggressive bodywork, and something most motorcycles can’t go without to remain competitive in today’s market – optional ABS and traction control.And the engine continues to use Honda’s respected VTEC valve-actuation technology, which first arrived on the VFR800F in 2002. This technology uses two of the four valves per cylinder at lower rpm, and all four above 6800 rpm; this helps build power up top and keep emissions low. Though not confirmed, the engine should produce around 106 horsepower.The 2014 VFR800F arrives with new Honda Pro-Arm rear suspension that features the single-sided swingarm, 43mm front forks, 10-spoke wheels, and a revised seat featuring adjustable height. The Deluxe model adds ABS, Traction Control, grip heaters, self-canceling turn signals, and a center stand.Attached above is a photo gallery of the 2014 Honda VFR800F; each photo also makes for great wallpaper.Our Editor-at-Large Jonathan Handler was recently at the US press launch for the new VFR; read his review here: 2014 Honda VFR800F First Ride Review. For features and specs, click here.Photos by Kevin Wing