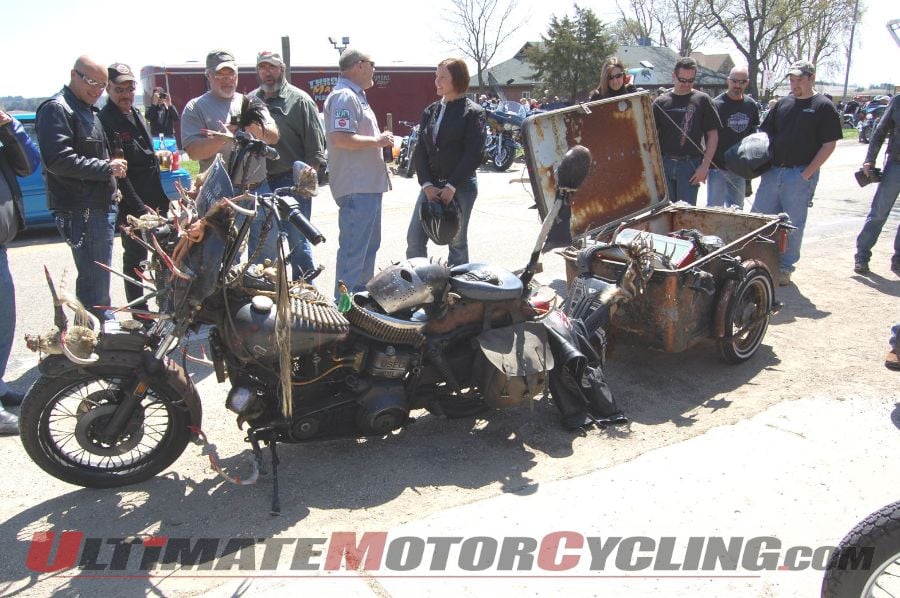 2014 Slimey Crud Cafe Racer Run Spring Edition PreviewNothing says “spring” to motorcyclists in the upper Midwest and parts beyond like the spring edition of the Slimey Crud Café Racer Run.Held on the first Sunday in May (fall edition is held on the first Sunday in October), the Slimey Crud Cafe Racer Run is perhaps the largest wildcat — no big sponsors — event in the U.S.The 2014 spring edition is set for May 4, which means bikes of all descriptions and from as far away as the Provinces of Canada will congregate in the tiny village of Pine Bluff, Wis., during the morning. By afternoon – at no particular time and by no particular route – the attendees will meander the back roads and highways to the village of Leland, Wis., in Sauk County.The event owes its existence to the Slimey Crud Motorcycle Gang, an eclectic group of enthusiasts going back to the seventies; the spring edition first occurred in 1994.Bikes of all descriptions and categories are welcome and do show up – radical kicked-out customs, rat bikes, street fighters, sport bikes, true classics and vintage iron, conventional, trail bikes, adventure bikes, cruisers, even full-on racers. And if you’re lucky, you’ll get to see Bill Whisenant of Madison’s Motorcycle Performance with his Bonneville Salt bike, a turbocharged partially streamlined fueller Ducati that has run 212.959 mph, making it the fastest Ducati in America. Whisenant may even show his Ducati drag bike that has run the quarter mile in 8.43 seconds with a terminal speed of 158.46 mph.The morning is spent socializing and milling around in a sea of bikes while taking pictures, ogling the iron, and meeting riders from all over. Then, at a time of your own choosing, mount up and start the meandering route of your choosing to Leland.  Done properly, this can take up a good portion of the day and cover many more miles than are actually necessary to get there.Most of the roads to get there are two-lane state highways, well-paved county trunk highways, and excellent township blacktop back roads. The scenery is superb and traverses the geologically unique southwest corner of Wisconsin known as the “Driftless area.”  Driftless means it does not have the “drift” or debris left by the ancient glaciers that scraped over all the surrounding areas of the state. Because the glaciers missed the area, spectacular sandstone pinnacles, bluffs and other formations are left soaring above green rolling dairy land pastures.Some riders tend to focus on screaming through the countryside like Valentino Rossi, forcing them to focus on the road to avoid becoming part of the scenery. This is a shame; if you take your time, sit up and soak it all in instead, there are some great things to see.There is no registration, no entry fee, no donation to make; just show up and have fun.  For information about the documentary on the Crud Run called American Café see, visit Slimey Crud History.For more about the Slimey Crud Café Racer Run, visit our Slimey Crud Run Review.See you there!