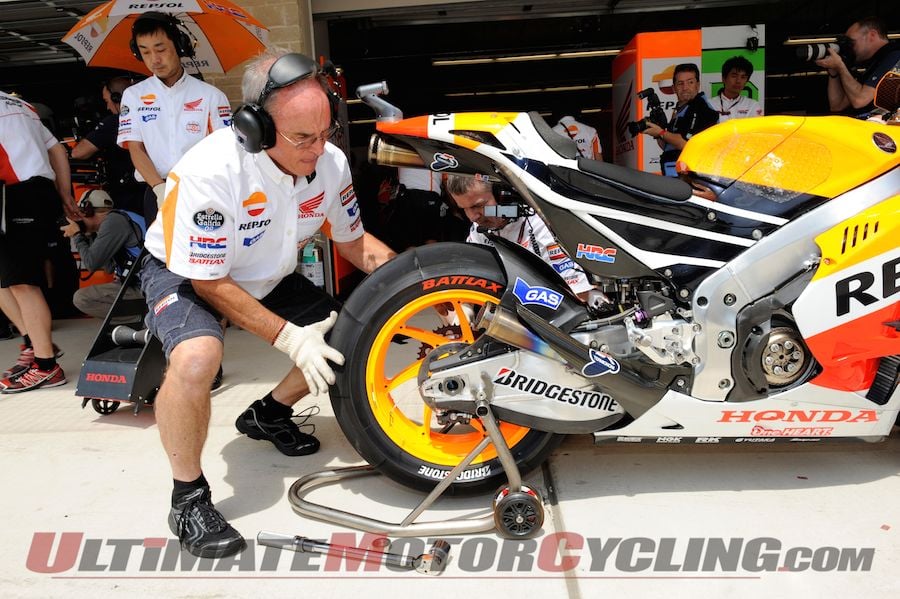 2014 Argentina MotoGP Pre-Race Tire AnalysisFor the first time since 1999, World Championship motorcycle racing will return to South America.This weekend’s round 3 takes place at the 2,986-mile Termas de Rio Hondo, a circuit that features numerous fast, long-radius corners that will likely produce the highest average speeds on the 18-round calendar.The high speeds, hard braking zones and high camber angles of some corners results in this circuit being one of the more severe for tires on the MotoGP calendar.The Rio Hondo circuit has an unbalanced layout with nine right-hand corners compared to just five left-handers. However, the left-hand corners tend to be more severe in nature than the right-handers and in particular corners such as turn six and eleven generate high tire temperatures, so the overall loads placed on the left and right shoulders of the tires are similar. This means the rear tire allocation for this circuit will be symmetric.The overall severity of the Autódromo Termas de Río Hondo means the rear tire allocation features rubber compounds from the harder end of the scale. Rear slick tyre options for the Factory Honda and Yamaha riders are the medium and hard compound rear slick, while the Ducati and open-class riders have access to the soft and medium compound rear slicks.As the Rio Termas Hondo circuit is a new addition to the World Championship, Bridgestone’s dataset for this circuit is limited, while a wide range of weather conditions could also be encountered. As a result, a special front slick tire allocation will be offered for this weekend’s Argentina Grand Prix to ensure riders have enough options to deal with the potentially variable track conditions. The riders will be able to choose from three front slick options – the soft, medium and hard compound front slicks – instead of the usual two front options offered per race weekend.Hiroshi Yamada (Manager, Bridgestone Motorsport Department) says: “I am happy to see MotoGP return to South America after almost a decade as it such a passionate region for motorcycle racing. This is an important market for Bridgestone and it pleases me that we will be able to showcase our advanced technology to a whole new audience. The large number of fans present at last year’s test at Termas de Río Hondo was a good indication of the reception we can expect this weekend, and I hope to see a huge crowd welcome the sport back to Argentina.“From a racing perspective, none of the factory teams tested at this circuit last year so it will be interesting to see which riders are able to adapt themselves to the demands of this very fast circuit. This weekend will be a busy one for our engineers as they will be tasked with helping the teams get the best out of the tires at this new circuit.”Shinji Aoki (Manager, Bridgestone Motorsport Tyre Development Division) says: “The Autodromo Termas de Rio Hondo is a new addition to the MotoGP in 2014, and our test at the circuit last year shows it is one of the harshest circuits on the calendar for tires. This circuit has a high average speed with some sections featuring high-camber angles, while corners like turn six are large radius, high-speed corners that generate very high tire loads.“The circuit is interesting in that although there are nine right-handed corners compared to five left-handed corners, the left shoulder of the tire experiences higher temperatures than the right shoulder, due to the left-handers generally being faster, more demanding corners.“As we have limited data for this track, we have decided to have a special allocation for the front tires this weekend to ensure maximum safety for the riders. Both our front and rear tire allocation for this race has to provide high levels of durability, stability and resistance to overheating, so we will provide tires formulated from our harder rubber compounds for the Argentina Grand Prix.”Bridgestone slick compounds available: Front: Soft, Medium & Hard; Rear: Soft, Medium & Hard
Bridgestone wet tyre compounds available: Soft (Main), Hard (Alternative)