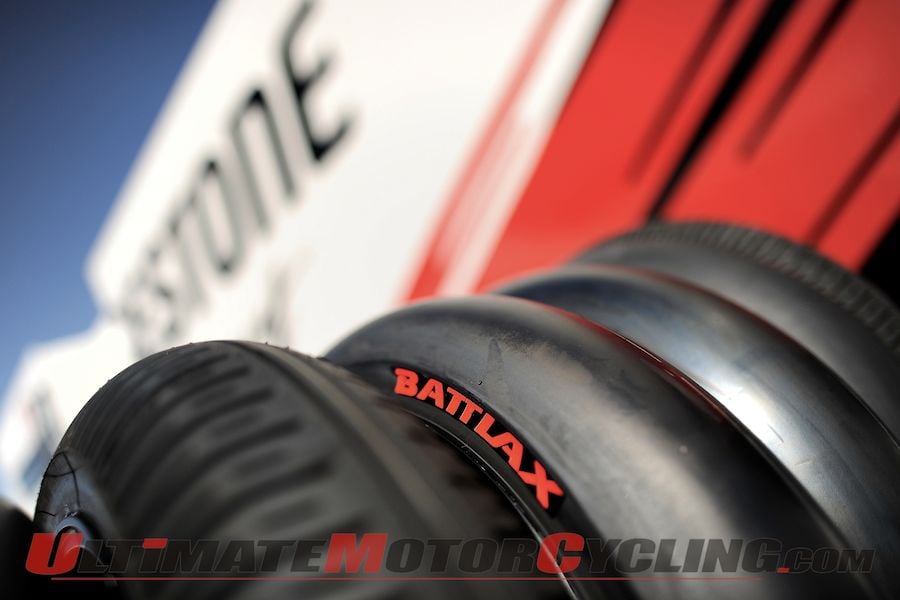 The 2013 Australian Grand Prix Phillip Island will go down in history as one of the most controversial MotoGP races.

And it’s all due to a newly paved track and higher-than-normal temperatures from the Bridgestone slicks. Circuit records were broken due to the higher traction available, but Bridgestone did not expect the tires to have their threads come off and rack.

To keep the riders safe, Bridgestone worked with Dorna and the usual 27-lap Phillip Island race was shortened to 19 laps. But what really caused the headaches was a mandatory bike swap for fresh tires, which had to occur on the ninth or 10th lap.

This caused some confusion for the Repsol Honda squad and its star rider Marc Marquez. The 20-year-old rookie didn’t come in on lap 10; instead, he came in on lap 11.

He was allowed back out on the track, but with six laps remaining he was black flagged. This meant no points for the MotoGP Championship point leader, and an easy win for his rival all season, Yamaha Factory Racing’s Jorge Lorenzo.

Due to Lorenzo’s win and Marquez’s disqualification, the rookie’s points lead shrunk from 39 to 18 with two rounds remaining.

As for race results, Lorenzo was joined on the podium by Repsol Honda’s Dani Pedrsoa – the only other rider with mathematical chance of earning the 2013 MotoGP title – and Yamaha Factory Racing’s Valentino Rossi, who only finished off the podium three times at Phillip Island since joining the premier MotoGP class in 2000.

In the following Q&A with Shinji Aoki, Manager, Bridgestone Motorsport Tire Development Department, many questions are answered regarding the controversial Australian Grand Prix.

Q. Last Sunday MotoGP witnessed its first flag-to-flag race in dry conditions. Can you explain what happened at Phillip Island?

Shiji Aoki says: “Basically, due to the much improved track surface at Phillip Island this year, the rear slick tire allocation we supplied for the Australian Grand Prix experienced extreme temperatures which affected their durability. The very high levels of traction offered by the tarmac resulted in some tires having their tread torn off and cracked – a situation we definitely did not anticipate.

“When it became apparent that doing the full race distance on a single rear tire was not feasible, we engaged in discussions with Dorna, the FIM and IRTA, who worked together to find a solution for the race. Considering the tire allocation we had to work with, I am pleased at the outcome on Sunday as the crowd at Phillip Island, as well as fans around the world got to witness a safe and exciting race. The teams and riders showed great flexibility and professionalism in adapting their program for a flag-to-flag race and for this they should be congratulated.”

Q. The original announcement of the flag-to-flag race was for a 26-lap race, then on Sunday this was revised to 19 laps. Why was the duration of the race changed?

Shinji Aoki says: “The decision by race direction to make a 26-lap race came after our advice that the maximum stint on a rear slick tire must be 14 laps, following our tire analysis on Saturday. With our mind on the safety of the riders, we asked the riders to do long runs on the harder option rear slicks in Sunday’s warm up session to see if running conditions were different compared to the day before, which could have a result on tire longevity.

“The analysis of the tires from warm up showed that on Sunday, ten laps was a safer distance on a single rear tire so for a one stop race, 19 laps was deemed the best race distance. It seems that the improved setup of the bikes in Sunday warm-up yielded better performance for the riders and hence increased the stress on tires even further compared to Saturday.”

Q. What was it about the track surface at Phillip Island that caused problems with the tires?

Shinji Aoki says: “We knew that the track had been resurfaced at Phillip Island resulting in the track being more severe and despite having special extra-hard rear slicks delivered to the circuit to address this change, the improvement in the condition of the track surface caused us problems.

“Although we have to investigate our used tires and look at telemetry data from the teams to reach a conclusion on all the contributing factors, the overall problem was sustained periods of very high tire temperature that before this weekend, were unprecedented at this circuit. Our initial findings suggest it wasn’t just the vastly increased grip of the tarmac itself that caused the problem. The lack of bumps in the corners meant the tires maintained more constant contact with the tarmac and this drove tire temperatures even higher. When you look at the best race lap time from this year, it is over two seconds quicker than last year, which shows just how much extra traction – and potential for higher tire temperatures – the new tarmac offers. We expected an increase in tire temperatures this weekend and prepared for this, but the extreme temperatures that occurred were far beyond our expectations.”

Q. An extra-hard rear slick was tested by the twelve works riders in Free Practice 4, but wasn’t used for the race. Why?

“Generally, harder rubber compounds offer better heat resistance, yet this wasn’t the always the case last weekend. Our hard compound rear slick fared better than our medium compound rear, but the extra-hard rear slick didn’t cope as well as the hard option. This seems to be another peculiarity with the new Phillip Island track surface and this is something our engineers are currently investigating.”

Q. How will Bridgestone ensure such problems at Phillip Island are not experienced in future races?

Shinji Aoki says: “It is evident from what we now know about the condition of the Phillip Island circuit that we will need to undertake testing here before the race in October next year. As Phillip Island isn’t currently used for any IRTA group tests or private team tests, we are currently negotiating a way by which we can test here next year with some MotoGP riders before the next Australian Grand Prix in October. This way, we can use the data obtained to develop tires that better suit the new track surface.”

Q. Are you confident that with testing, Bridgestone will be able to make tires that last a full race distance for next year’s Australian Grand Prix?

Shinji Aoki says: “Yes, everyone at Bridgestone is confident that if we test next year with factory riders at Phillip Island early next year, we can develop tires for this circuit that will last the full race distance of 27 laps.

“It will be a big challenge for us, but one we will pursue diligently. Creating new slick tires that will have enough durability and heat-resistance on the new surface, yet still deliver the grip levels and warm-up performance that is required at Phillip Island will be made a priority for the engineers at Bridgestone’s Technical Centre in Japan.”