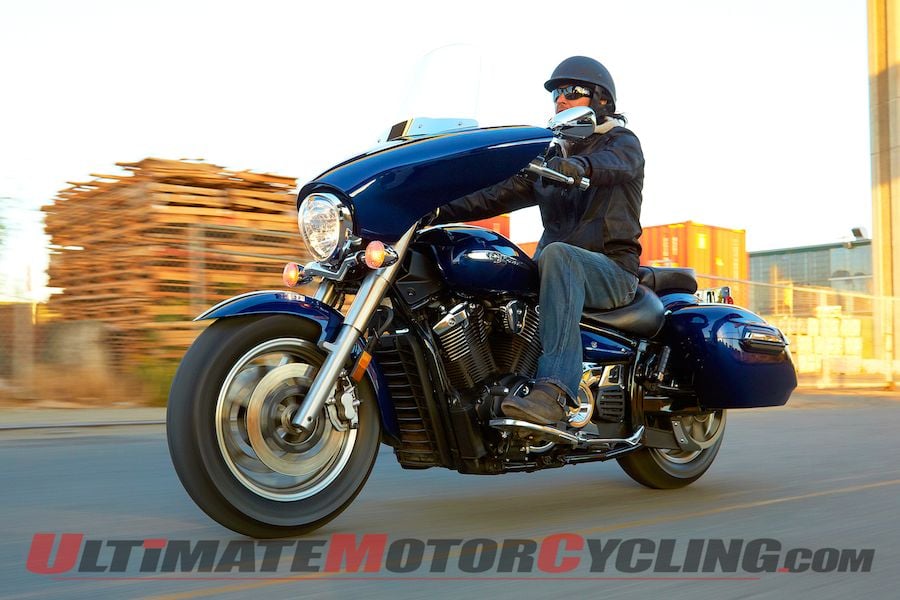 2013 Star V Star 1300 Deluxe TestThe 2013 Star V Star 1300 Deluxe rides the wave of popularity of the touring cruiser segment, a class that now accounts for 42-percent of cruiser sales. This is over double the touring cruiser market share in early 2009.Taking the standard V Star 1300 platform, Star has created what it calls a “Casual Full Dress” touring bike. The V Star 1300 Deluxe has a fairing in the front–not a full coverage fairing but more than just a windshield. Also, the Casual Full Dress machine has hard side bags, but not the top trunk you find on a Full Dresser.This makes good sense, as the V Star 1300 Deluxe uses a smaller motor than a full dresser, yet it still yearns to satisfy the long-distance rider. Mounted in the Deluxe’s fairing is an integrated Garmin Zumo 665 GPS system, something very desirable for rides to unfamiliar destinations. Even when at home, which the optional SiriusXM satellite radio subscription, you get weather and traffic conditions.Integrated into the 2013 V Star 1300 Deluxe’s Garmin Zumo GPS unit is access to your iPod or iPhone (the plug fits iPhone 4S and earlier), which can be stored in a dedicated pocket in the left side bag.Simply plug it in and use the volume and track buttons on the left handlebar. Disappointingly, the player is not fully integrated into the GPS unit, as the song selection is not displayed and you cannot move between playlists. However, the sound is decent and operation fairly simple.Riding the 2013 V Star 1300 Deluxe is not that different from previous iterations of the V Star 1300. The fairing does offer very good protection from the wind for a bar-mounted design, and various windshield options allow you to go from an urban-friendly spoiler-style windscreen to tall protection that you look through.Power has always been a strong suit of the V Star 1300 and the Deluxe has it all. Star gives the bike a relatively light flywheel, so the oversquare motor is a willing revver. The downside of this is a sometimes-jerky throttle response, especially when the motor is under mode. Also, at parking lot speeds, be prepared to slip the clutch to prevent chattering or stalling.Along with the revvable more, the chassis on the 2013 V Star 1300 Deluxe is also responsive. It is not set in its ways in a corner, and if you need to correct, it is more than willing. The Deluxe don’t have that freight train feel in corners that some people like in a cruiser, though riders migrating from sportier machines will feel right at home. In a straight line, stability is more than satisfactory.Vibration is minimal, thanks to a highly effectively balanced 60-degree V-twin motor. Ergonomics are just about perfect, with wide buckhorn bars delivering good handling, as well as all-day comfort. The five-gallon tank will take you as far as you’re likely to want to go without stopping.Braking is outstanding, thanks to a pair of discs up front  and a fat 16-inch rear tire.Star has taken a successful machine and made another desirable flavor – the 2013 Star V Star 1300 Deluxe. For those who want a lightweight dresser and don’t need 100 cubic inches or so (solo riders take not), the V Star 1300 Deluxe is a compelling choice for cruising and touring. Making this choice easier is the MSRP – $13,690.