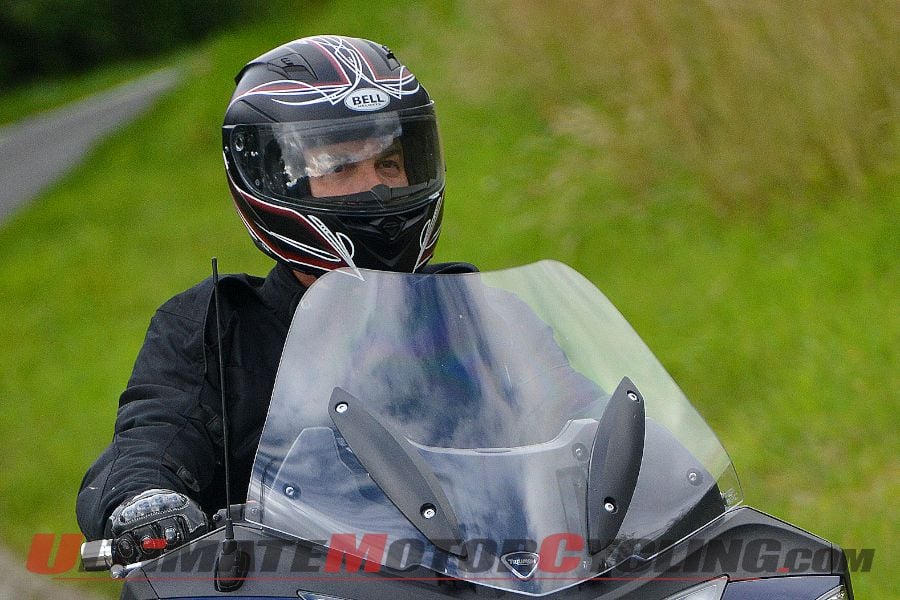 Bell Revolver Evo Modular Motorcycle Helmet TestTouring has its own unique set of demands on a helmet, particularly for those who add sport riding to the mix. With cool graphics, something you don’t often see on modular helmets, the Bell Revolver Evo will attract those who want a little style to go with their helmet’s functionality.Undoubtedly, the big selling point for a modular helmet is its ability to swing the chin guard out of the way at stops (all manufacturers recommend that you ride with it only in the locked down position) so you can easily converse with others.The Bell Revolver Evo pivots up easily, thanks to a large button just in front of your chin. Some helmets make it a two-handed job to get the click when locking it down, but the pivot system works well on the Evo and it’s a one-hand operation, though the chin curtain might require some secondary manipulation.The other part of securing the helmet to your head is the chinstrap. Quite often,  a hard plastic chinstrap is used on a modular; instead, Bell uses a traditional soft strap and Bell’s clever strap keeper. It is our favorite strap-retaining design. No snaps or slots are needed to hold the end of your strap – just get it close and let the integrated magnet do its job.As is often the case with modular helmets, the front of the Revolver Evo sits close to your face. If you’re claustrophobic in helmets, you won’t like it. There is so much hardware on modulars that roominess suffers.The built-in smoke-tinted interior visor is excellent and glare-free. It can be a bit difficult to manipulate the lever by your left ear with gloves on when it comes time to move it into place, though the spring-loaded action pops it up easily.Modular helmets are traditionally noisier than standard full-face models, and the Revolver Evo is no exception. Fortunately, the design of the various interfaces – visor, chin guard, and vents – continue to improve and reduce the sound penalty.Despite using a thin polycarbonate shell, the Revolver Evo is a heavy helmet, weighing in at an ounce over four pounds. While it feels heavy when being lifted, it balances well on the head; the shell is efficiently aerodynamic, so the helmet can be worn for an entire day’s ride without undue fatigue.At the lower end of the price scale for modular helmets ($200 without graphics), the Bell Revolver Evo does its job as a touring lid, and it will please those who want to look a bit cooler than the average modular-wearing rider.For additional information, visit Bellhelmets.com.