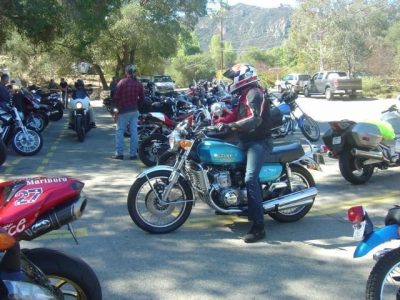 This may sound strange, but I regularly hang out with people I hardly know. I couldn’t tell you their names, what they do for a living, or about their personal lives. Our paths frequently cross on Sundays at the Rock Store—a famous gathering spot for Southern Californian motorcyclists—and the reason I know so little about them is that our topics of conversation focus nearly exclusively on motorcycles.Humans are inherently social creatures who seek out interaction with each other. This trait might explain why the mere act of riding a motorcycle establishes a common bond of shared interest. Just pulling up to a place where other bikers are parked serves as an icebreaker, and that is how my many anonymous Rock Store friendships began. Without any plans to meet, we tend to congregate at about the same time each weekend. Once our encounters were purely serendipitous, chalked up to chance; but routine has increased the likelihood of our seeing each other again. When we do, there are greetings, talk of the day’s ride thus far, and the ride ahead. We discuss machines, and plans to sell or buy. There are musings about the future and recollections about the past. Always the talk is connected to motorcycles.An interesting aspect to this weekend camaraderie is that motorcycles—by virtue of exposing their riders to the elements—have inspired dress codes of functionality that, for the most part, remove traditional clues to an individual’s social status. With the ritualistic donning of a motorcyclist’s apparel, we all become equals. As we shed the clothes associated with our daily lives, whether it be a suit or a company uniform, white collar or blue collar, we remove the pretense of symbols that can sometimes drive—or prevent—an introduction. We are all just motorcyclists.In a society so enamored of status and wealth, where their pursuit is an acceptable obsession, there exists a freedom in the anonymity of riding a motorcycle. Free from prescribed agendas or suspicions of motives, you can hear more clearly exactly what is being said. There’s a simple pleasure in conversation for the sake of conversation. Motorcyclists are good at this. Unlike an automobile or a home, the disparity between the cost of a high-end motorcycle and a low-end bike is comparatively narrow.A motivated individual, especially when driven by the kind of deep desire prevalent in so many enthusiasts, can pretty much obtain the machine of his dreams. It is this accessibility that blurs the lines of social place and puts us all on even ground. This by no means suggests that our motorcycling clan is immune to attitude or judgments. Far from it. But in general, our commonly shared interest in two-wheeled machines invites an esprit de corps, where keeping up with the Joneses has little bearing.The next time you’re at your favorite motorcycle stop, whether it be a roadside pullout, a coffee shop, or café, consider the band of brothers and sisters who have slipped from their workweek identities into the wonderful anonymity of a leather jacket and boots. Trust me, among you are CEOs, service workers, lawyers, dentists, mechanics, artists and dreamers. While up on two wheels, however, they are most content to be motorcyclists.