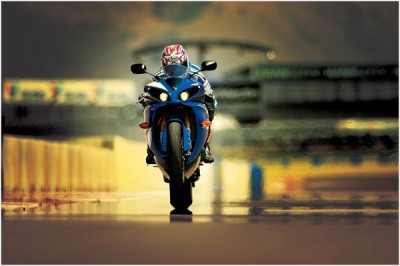 Big Bang? No, Think Crossplane.Yamaha’s mass production YZF-R1 superbike has more in common with Valentino Rossi’s feral M1 than ever before, now that a key component of championship-winning MotoGP engine technology has trickled down to the track-ready street bike.Because most inline-4s operate with two outer and two inner pistons moving together in pairs, an inherent fl uctuation in inertial torque occurs during each revolution of the crankshaft. A new crossplane crankshaft debuting in the 2009 Yamaha R1 engine arranges each piston at 90° from the next, producing an uneven firing order of 270°-180°-90°-180°. Though the term “uneven” may suggest inefficiency, the engine’s 1-2-1 pulse is designed to result in a less peaky and more linear power delivery, producing greater traction at the rear tire as revs increase and the bike accelerates out of a turn.The term “big bang” has been used in reference to the fi ring order, but the phrase more accurately describes the bike’s intended explosive demeanor. The R1 is already known for its laser-sharp focus and unrelenting performance, and this race-inspired engine configuration aspires to take it to the next level. A coupling-type balancer that rotates in the opposite direction of the crankshaft counteracts the vibrations produced by the unconventional setup. Complementing the crossplane crankshaft are forged aluminum pistons, ram-air intake, and a completely new exhaust system that emits an intense song.Though a user-controlled mode selector can change the electronic throttle from full power to a milder setting more suitable to rain or low-traction situations, making the switch takes a bit of restraint. With a more radically tuned force driving the bike’s 190/55 ZR17 rear tire, the new Yamaha YZF-R1 takes one step closer to its MotoGP sibling and earns its revolutionary powerplant a well-deserved Achievement in Design Award.ULTIMATE MOTORCYCLING FEBRUARY / MARCH 2009 2009 Yamaha YZF-R1 | Radio Motorcycle Review