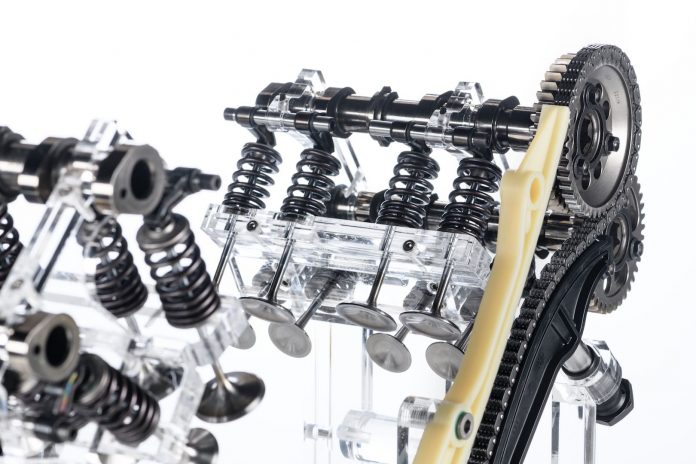 When Ducati released the Multistrada 1200 in 2010, the Borgo Panigale brand touted the bike as “quattro moto in una,” or four bikes in one. The name is derived from the bike’s four riding modes – Sport, Tour, Urban, and Enduro.
And the bike performed well at all levels, especially on the sport and touring side.
The largest problem through the years of the Multistrada, which grew from a 1200 (1198cc) to 1260 (1262cc) in 2018, was service intervals. Belts needed to be changed and valves adjusted at 15,000 miles.
This changes for 2021, when Ducati will release the much-anticipated Multistrada V4. How’s 37,000-mile intervals sound? These intervals are possible due to the all-new V4 Granturismo engine that uses traditional spring valves vs. the usual desmodromic valve train.
The following are the fast facts about the all-new Multistrada V4 motor. 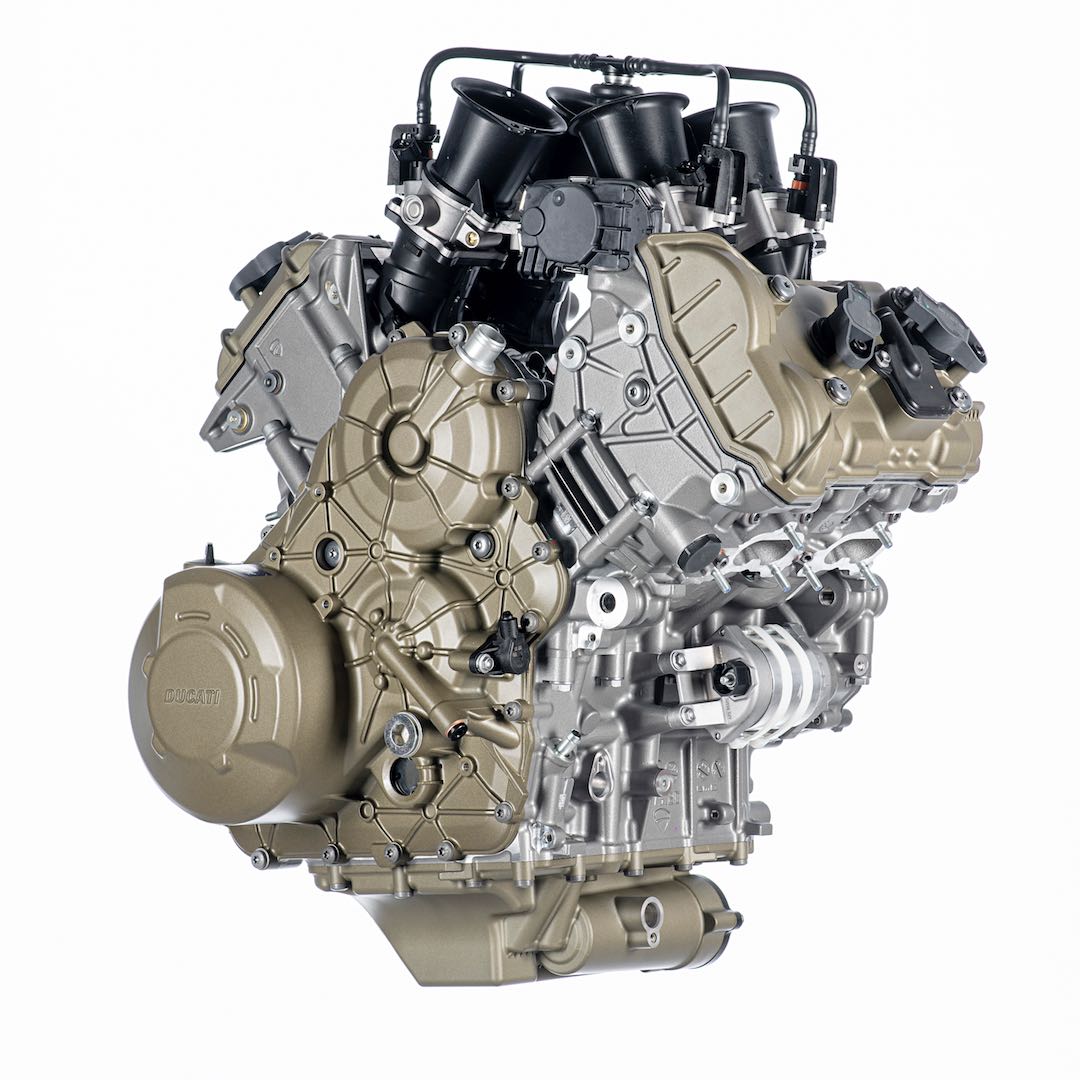 1. Don’t expect a simple engine transplant from the V4 Panigale to the Multistrada. Ducati has completely overhauled the V4 powerplant, calling it the V4 Granturismo. The new 1158cc 90-degree, 16-valve engine produces 170 horsepower at 10,500 rpm and 92 ft/lbs of torque at 8750 rpm (and, of course, Euro 5 compliant).
2. Due to the use of spring valves versus the desmodromic valve train, maintenance intervals have increased drastically. The bike now needs valve clearance checks and spark plugs every 37,282 miles, and oil changes every 7500 miles. Ducati says, “no other motorcycle engine currently on the market goes that far.”

3. The engine features a counter-rotating crankshaft (crankpins offset at 70 degrees), which operates in the opposite direction of the Multistrada’s wheels. This technology, used in MotoGP, improves handling due to compensating for the bike’s gyroscopic effect. As Newton’s First Law says, “A body in motion tends to move in a constant speed and direction unless acted upon by an external force.” The wheels move in one direction, and the counter-rotating crankshaft counteracts this movement, helping to keep the bike’s chassis settled under braking or throttle. The counter-rotating crankshaft also aids for quicker turn-in.
4. The engine’s design minimizes vibrations. Because the engine features a counter-ranking crankshaft combined with a 90-degree  V4 layout, the engine doesn’t require a balancing countershaft. 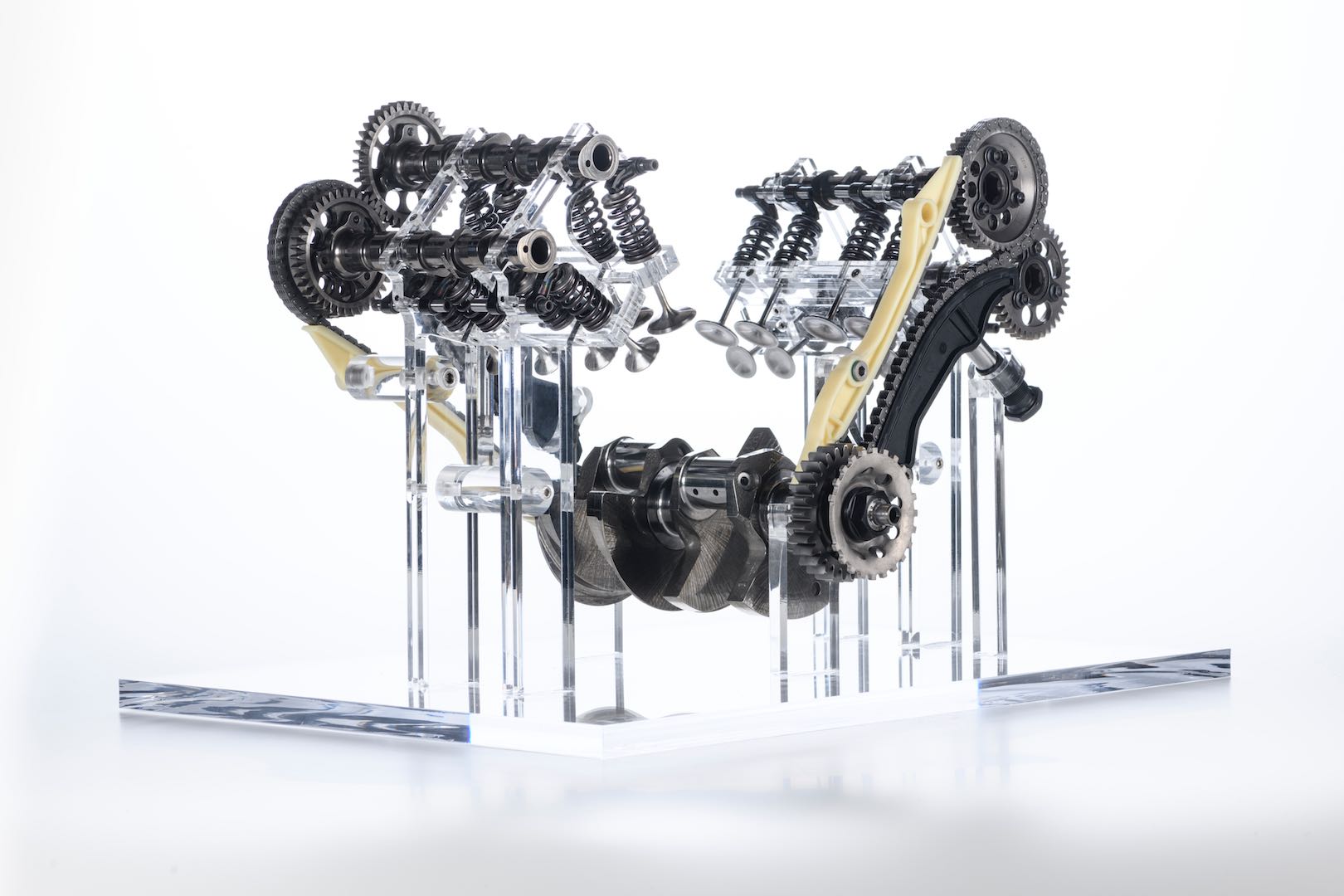 5. The V4 GT engine features Twin Pulse technology, which Ducati calls the combination of the 70-degree crankpin offset and 90-degree V4 layout. The two left-hand cylinders fire closely together, as do the two right-hand ones. Ducati says in the timing chart, the ignition points are at 0°, 90°, 290°, and 380°. This firing allows the Granturismo engine to feel like a V-twin.
6. For optimal fueling on the street, the V4’s fueling system features smaller diameter throttle bodies, longer ducts, and optimized combustion chambers over the V4 Desmosedici Stradale that arrives in the V4 Panigale.
7. Unlike the Panigale V4, the Multistrada’s heat is reported to be minimal. Helping this effort is the automatic shut-off of the V4 GT’s rear cylinder while the rider is stopped, a process that Ducati calls “deactivating rear bank.”

8. The clutch and flywheel are optimized to remain consistent throughout any speed. Ducati says this helps the rider feel an “instant throttle response.”
9. The camshafts are driven by two “silent” timing chains. Ducati says at the front, the chain drives the intake camshaft, which, in turn, transmits drive to the exhaust camshaft via a pair of cogs (hybrid chain-cog timing). At the rear, the chain drives the exhaust camshaft, which transmits drive to the intake camshaft. This solution minimizes timing power absorption, enhancing performance and reliability. Front cylinder timing is controlled by the chain on the engine’s right-hand side, turned by the crankshaft via a gear obtained on the primary drive pinion. The one that controls rear cylinder timing is on the engine’s left-hand side and is driven by a monobloc gear on the crankshaft. Each cylinder head also has an anti-knocking sensor that optimizes spark advance to prevent any combustion shock. 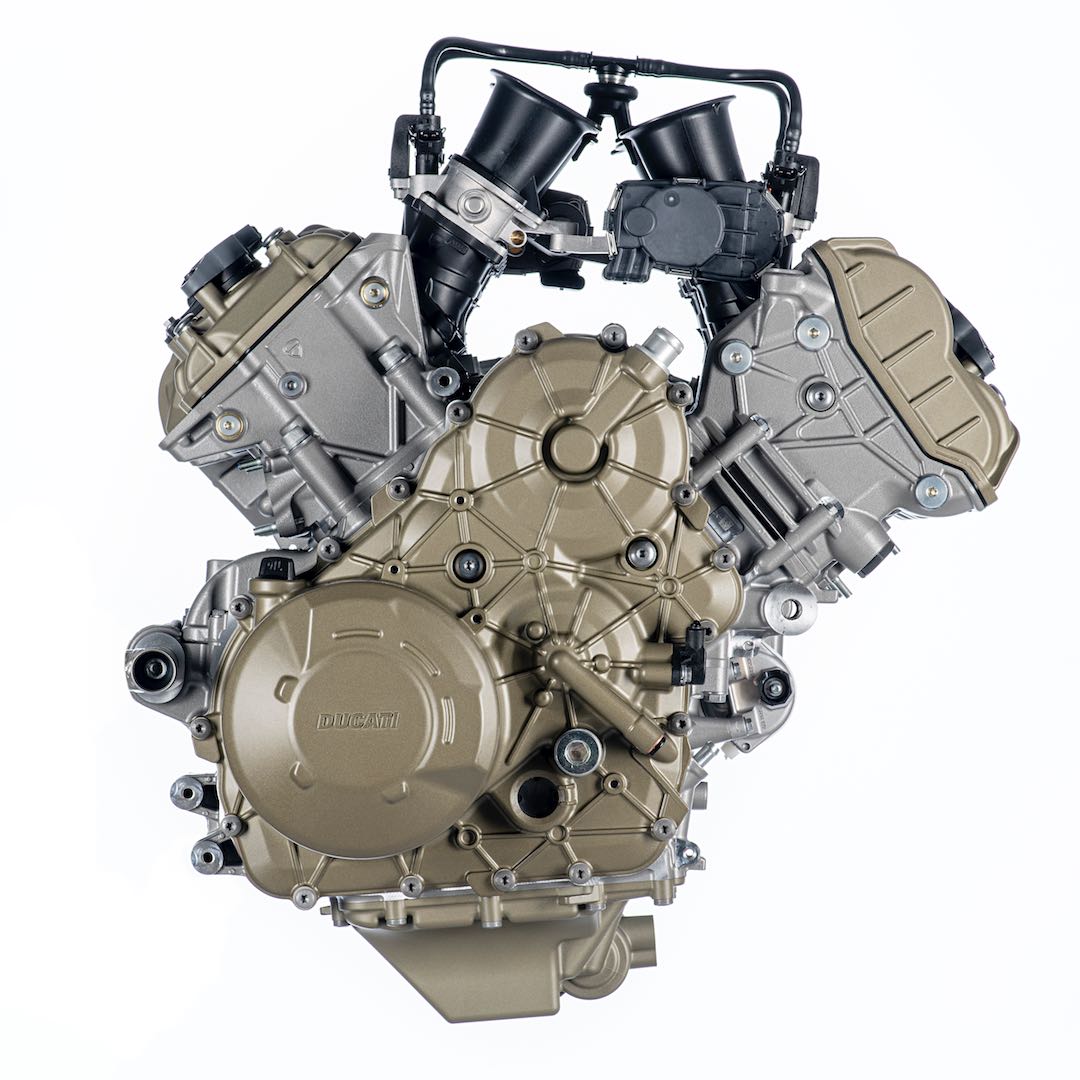 10. To ensure proper lubrication, the V4 Granturismo uses semi-dry sump lubrication – just like the Panigale V4 engine. This design provides ample lubrication regardless of all riding situations, from hills to massive lean angle. The oil pan positional also helps increase ground clearance.
11. The Granturismo engine uses a six-speed transmission, with gearing for everyday riding situations. The gearbox is also equipped with a rotary gear sensor to work optimally together with the Ducati Quick Shift (DQS) system for clutchless shifting (up and down).
12. Ducati says the hydraulically controlled wet clutch features a progressive self-servo mechanism that compresses the friction plates when under drive from the engine without requiring any extra effort from the rider to release the clutch.
Ducati will officially unveil the Multistrada V4 on November 4. Ducati also says 110,000 Multistrada V4s were produced as of October 6.
V4 Granturismo Engine Specs: