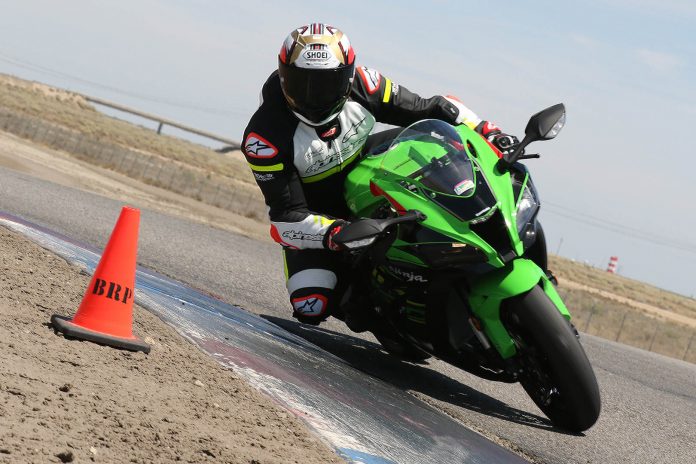 Buying your first one-piece suit is a momentous occasion, but thinking back on my own experiences, it was one fraught with indecision. Would I pinch every penny and get the most expensive slab of cow on the rack or aim for the bargain bin? They’re all leather, right? Well, there is quite a difference in features, as I’d learn while perusing the all-new one-piece suit lineup from Alpinestars while at Buttonwillow Raceway Park.In the end, practical riders want the most amount of protection for the least amount of money. After all, if you’re buying a one-piece suit that implies you have your eyes on hitting the canyons and track, which means more cash for tires, as well as track day fees. Luckily, the Alpinestars Missile Ignition Tech-Air Compatible suit is the cure for the rider in need of the most bang for their buck. 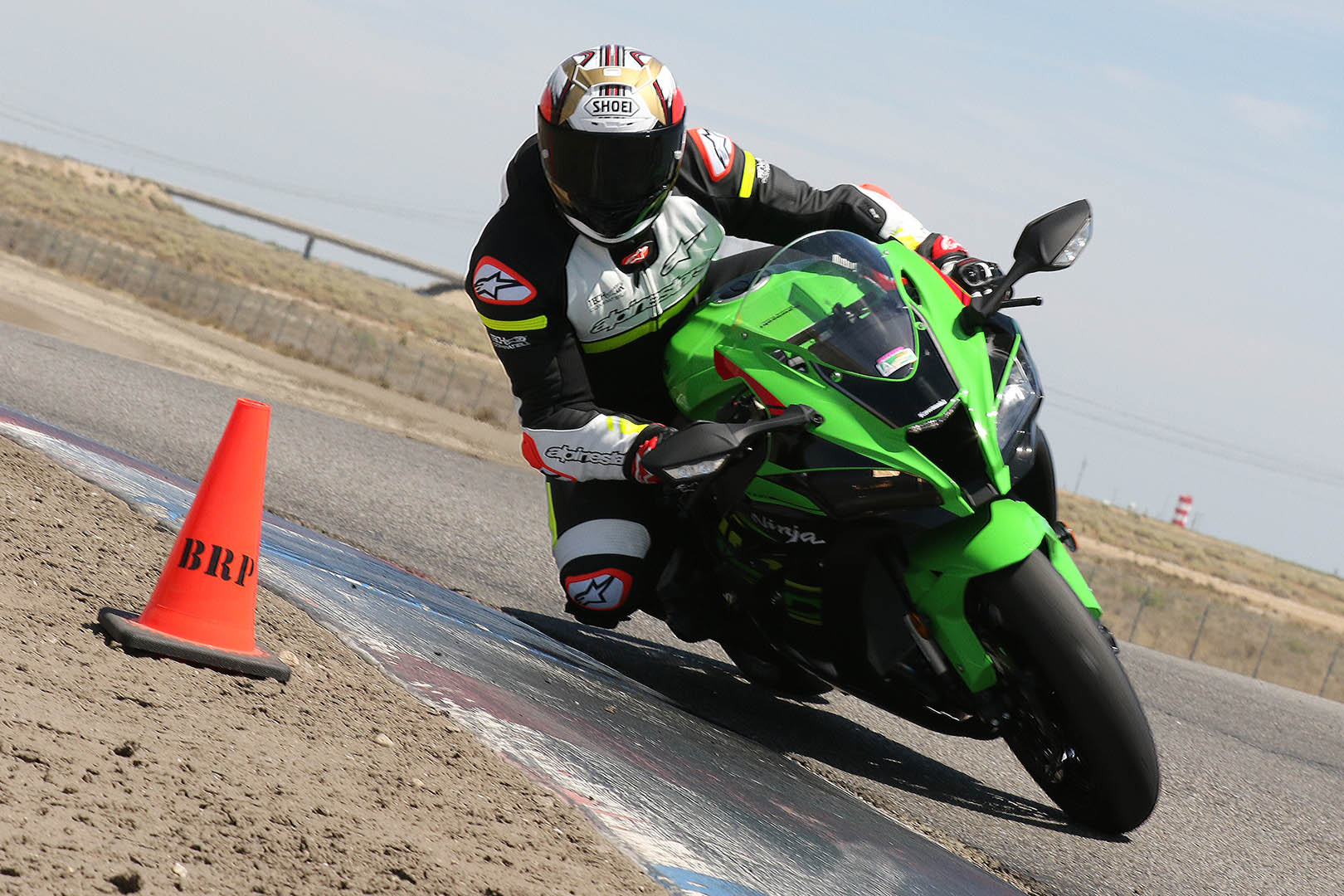 The Alpinestars Missile Ignition is the Italian company’s entry-level Tech-Air Compatible suit and, yet, it is anything but entry-level. Seen as a follow-up and improvement to the popular Missile Tech-Air Compatible one-piece suit, which I’ve spent tons of time in, the Missile Ignition aims to include a few premium features for its $1100 price tag.First things first—all Tech-Air Compatible suits can be run with or without the Alpinestars Tech-Air Race vest installed. If you want to pull the vest because you’ll be riding on the street, or are waiting to buy the $1149 Tech-Air Race vest, you can still utilize the suit without the vest. In its place, conventional CE-rated back and chest protectors are used, which is something Alpinestars’ competition doesn’t accommodate, as their airbags are non-removable.The Missile Ignition uses strategically placed 1.3mm bovine leather, instead of pricier, and lighter kangaroo leather found on the top-shelf Alpinestars GP Tech V3 suit. The approach of using leather in the crucial areas and relying on other materials keeps weight at a minimum, while still providing more than ample abrasion protection at a reasonable price. Cowhide might not be as exotic as the leather sourced from our hoppity friends, but it’ll do the trick should things go south. Double-layered leather in high-risk areas like the seat, shoulders, and knees is part of the package.The thighs, shoulders, and arms get minimal perforation. The stomach panel features a healthy amount of perforation that allows air to be felt, once you get your helmet in the wind. In Southern California, where you find racetracks in areas that perpetually remain near or in triple digits, proper airflow isn’t a suggestion—it’s a requirement, and the Missile Ignition flows air adequately. Still, having gotten a taste of a suit with full perforation, I would like more airflow in the extremities, and that observation stands for any off the rack suit I have in my closet. 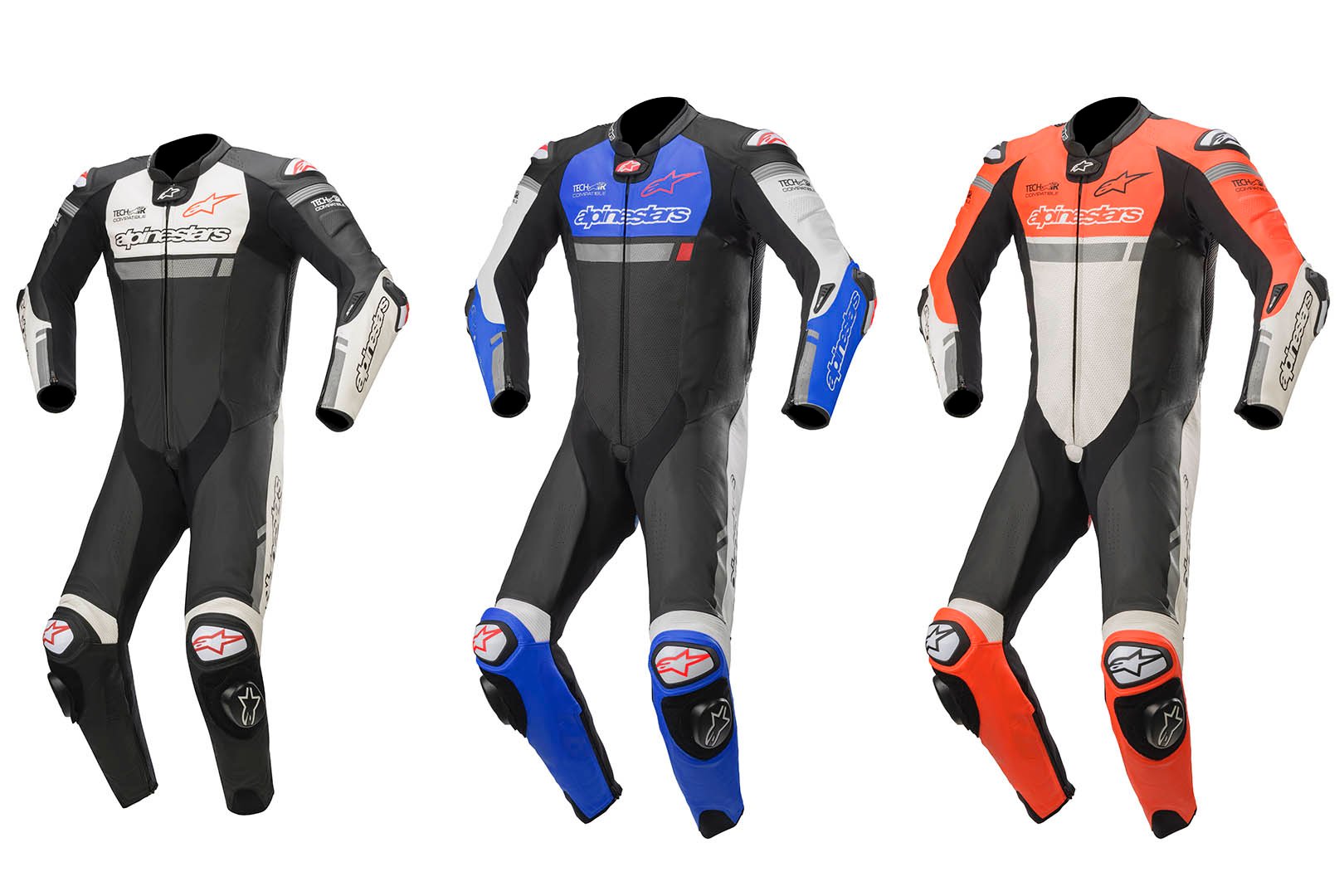 While the lack of perforation may be worrying to the inattentive eye, it’s made up in the massive amount of abrasion-resistant stretch paneling found throughout the garment. Not only does the stretch paneling allow for positive airflow to help keep you fresh, but it also increases mobility when compared to suits that lack this feature. The paneling now extends a bit farther up into the shoulders to allow better movement in the arms. As if that isn’t enough, there are calf extension gussets for those with meatier legs.In terms of appearance, the original Missile and Missile Ignition look remarkably similar, even though the cut has changed quite a bit. It is readily apparent when eyeing them side-by-side, as the original Missile hangs nearly straight in comparison.The Ignition features an updated cut with a racier profile; the pre-curved arms and legs are in a more competitive position, which is far more conducive to sport or track riding. The most noticeable differences I felt were the more aggressive curvature in the arms and the increased mobility in my legs, both of which encouraged better movement on the bike. In that regard, it is a massive improvement.Aiding in the mobility mission is accordion paneling, found at significant joints, in the lats, and the lower back. Taken together, the suit feels pliable and doesn’t work against the rider.Fitment is unique from person to person, which is why we always recommend working with your authorized dealer to get a suit that is right for you. However, the sportier cut is one aspect that many owners will likely appreciate, regardless of how they squeeze into a suit.The Alpinestars Missile Ignition has an MSRP that puts it in with other mid-level suits. However, in terms of protection, you get a taste of what is in the upper echelon of leathers. The shoulders, elbows, and knees all have Alpinestars’ propriety DFS armor. Notably, the elbow features a replaceable slider for those doing their best Marc Márquez impressions at the track. While many of us would only dream of doing that, it does add another layer of protection. 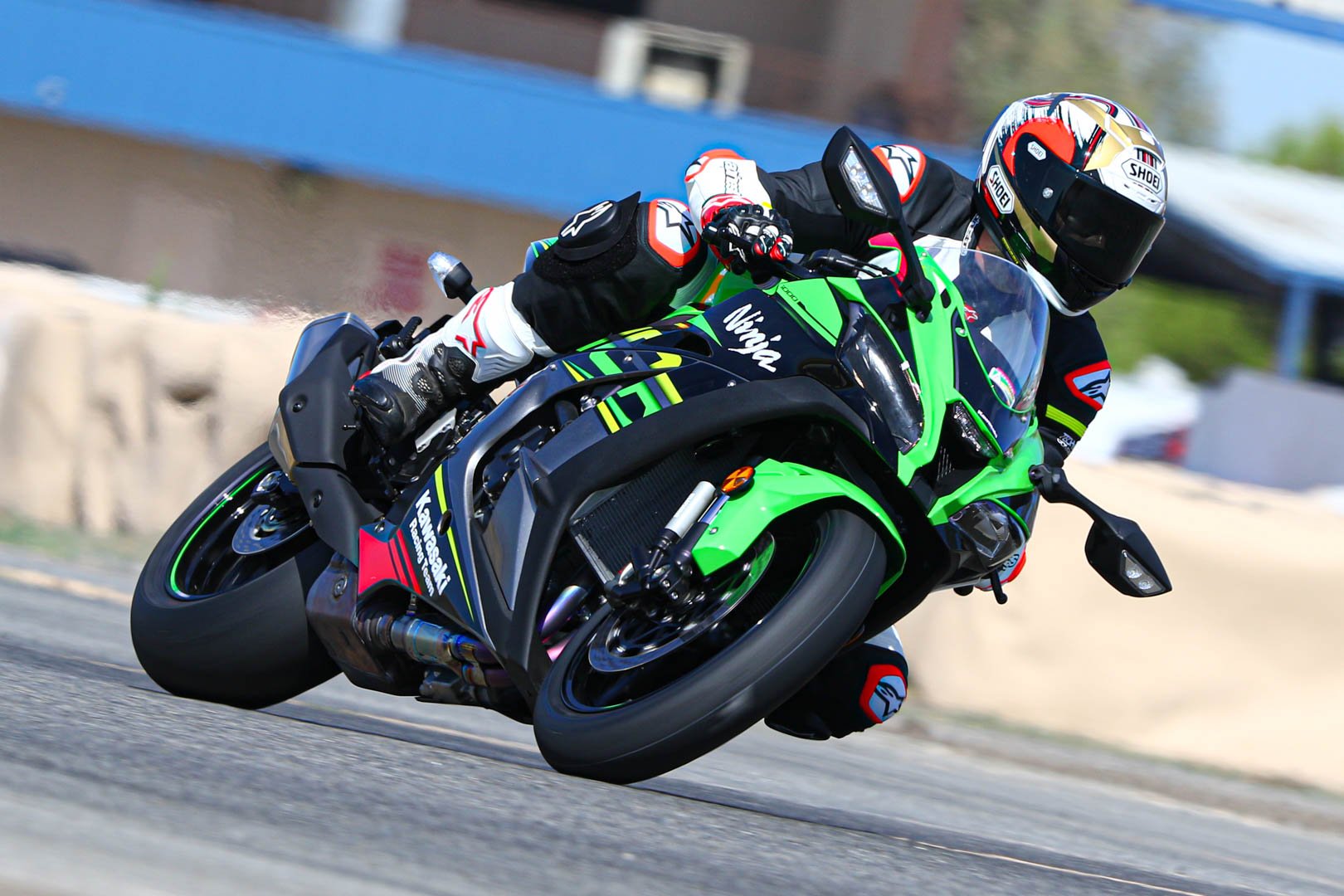 The DFS caps are part of a dual strategy in dealing with impacts. Internally, the shoulders, elbows, and knees boast CE-rated GP-R armor, which reduces the chance of serious injury during a fall. This strategy is a marked difference from more affordable options found in non-airbag-compatible entry-level suits such as the Alpinestars Challenger V2, which does not feature DFS armor of any kind. Also, CE-rated hip armor has returned to the fold.One aspect of the knee DFS cap that does not appear on the Missile Ignition is the integrated tank grip, as seen on the GP Tech V3, GP Pro V3, and quite literally all the suits on your favorite Alpinestars suit-wearing professionals. It’s an advantage for me, as it helps me lock my knee against the tank, especially when riding polished up press bikes that are kept pretty for photos. Sadly, it isn’t featured here. Don’t shed too many tears. A quick fix is to throw on some tank grips, and it’ll grip the leather just as well.Another keen change is knee-puck placement. The original Missile had Velcro that was nearly on the side of the leg, and didn’t allow for a great deal of movement. If you carried lots of lean angle, that placement worked. If you had a canyon-rider style and stuck your knee way out, you ran the risk of missing the puck. The new placement is far more traditional and offers more wiggle room to find what’s right for your body, motorcycle, and riding style.Moving to the interior, there is a revised mesh liner. A critical difference between Alpinestars and some competitors is the use of a mesh liner that features stretch paneling at your joints, increasing mobility and, in turn, comfort. The wrist and ankle clasps are gone—an aspect of the original suit that never made much sense. If the suit fits decently, it isn’t going to move up or down on your limbs.There is a pocket capable of holding a phone or wallet on the liner. One quirk to that pocket is that it becomes hidden under the airbag vest because the vest sits on top of the mesh liner. To access the pocket, you must partially unzip one side of the vest and fish your hand under it. Otherwise, it is easily accessible. Interestingly, custom Alpinestars suits don’t have this issue because the Tech-Air Race vest sits under the mesh liner.Other creature comforts come in the form of a padded neckroll, which is one of the best additions any suit can have. I have more than my fair share of leathers that would dig into my neck and rub it raw from a full day of riding on the track. 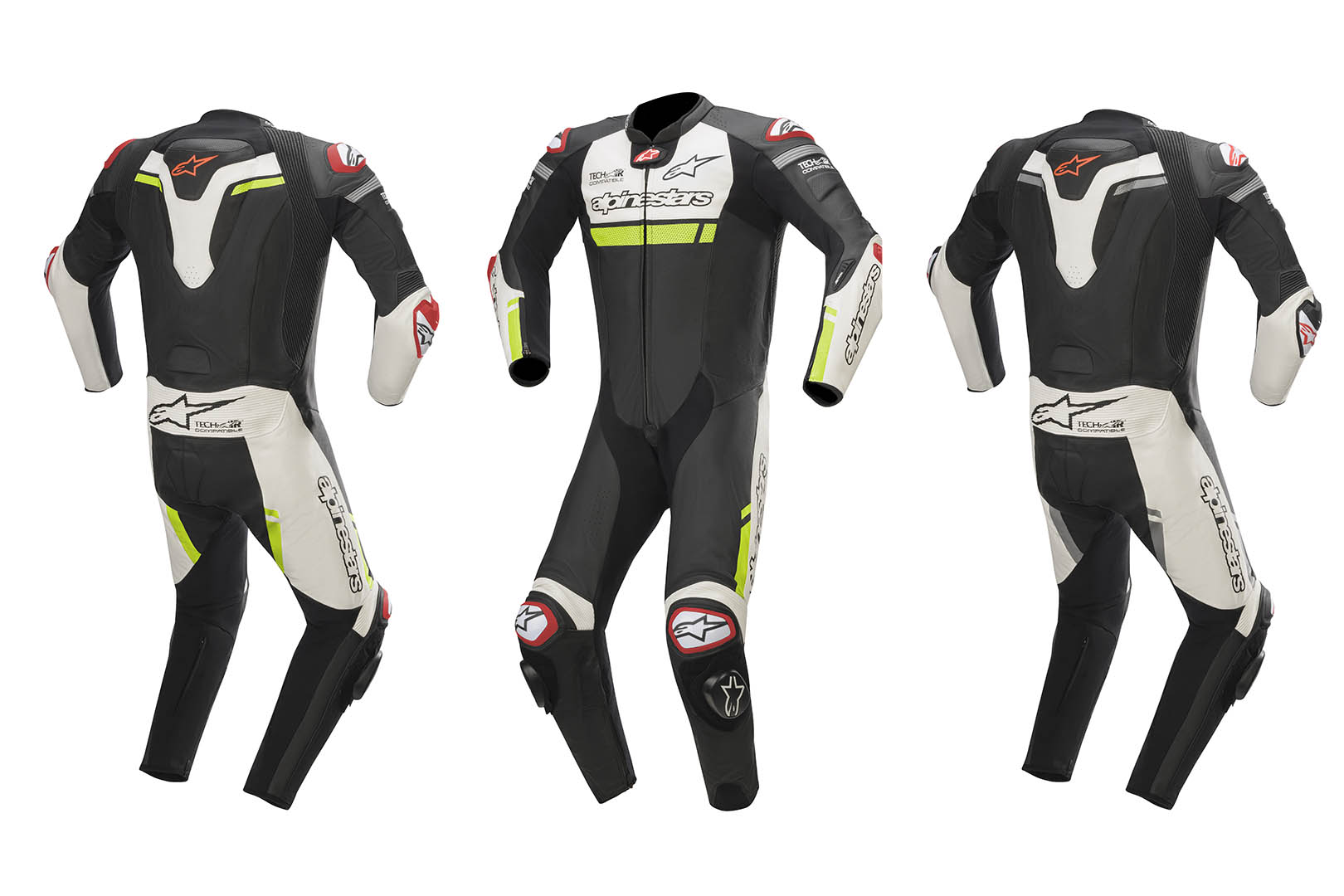 Currently, the Alpinestars Missile Ignition represents the best value for airbag suits. With an MSRP of $1100, the suit can be worn with conventional back and chest protectors or equipped with an airbag for an additional $1149. Should you upgrade to a GP Pro V3 or GP Tech V3, the same airbag can be used in future suits. It is an initial investment, as opposed to a consumable item. The modular aspect of the Tech-Air Race vest doesn’t apply to any other internal-airbag-ready suit.The Alpinestars Missile Ignition suit has managed to pack several helpful features into a suit, while also keeping the price accessible to a broad audience. More than that, a rider can build on it and add layers of protection that can be carried on to other Tech-Air suits throughout their career. The Alpinestars Missile Ignition might not have all the fancy bells and whistles of costlier suits, but it’s offering a whole lot for the money.Action photography by CaliPhotography

Get the Gear You See Here at MotoSport.com!