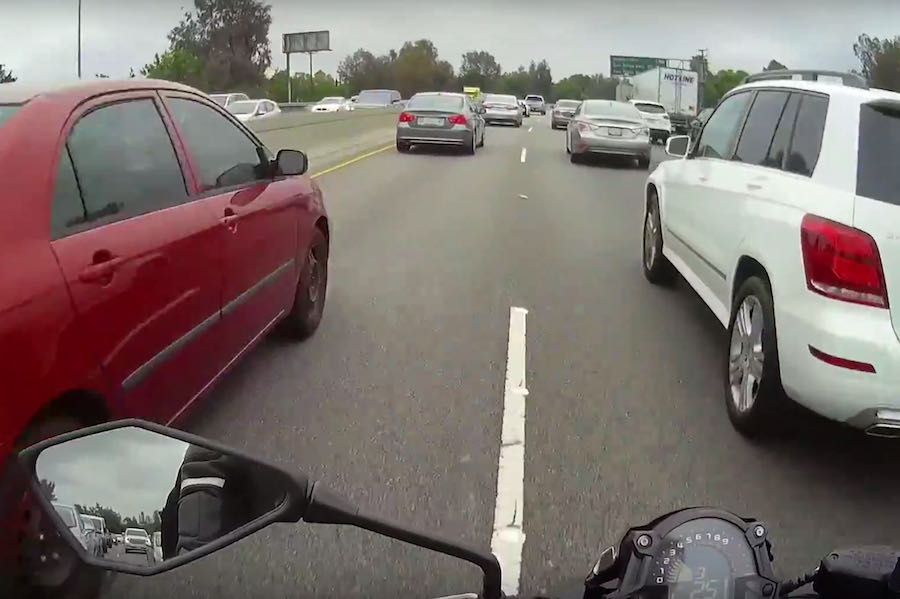 I’ve been a weekday motorcycle commuter for just about nine years now, lane splitting 16 miles to work and then back again across the San Fernando Valley on the heavily trafficked US 101 in Los Angeles. Lane splitting has only recently landed on the books as legal in California, but it’s been an accepted activity for years and one I have taken full advantage of.Lane splitting is not for everyone, and it’s certainly not for the faint of heart or inexperienced rider. When I dive into the channel between lanes, I feel like Luke Skywalker and the Rebel Alliance pilots flying down the long, narrow trench, dodging fire from TIE fighters on their mission to destroy the Death Star.Here are some key tips to keep you safe while co-mingling in close quarters with our four-or-more wheeled drivers.1. Mirrors are your enemy. They come at you from both sides, high and low, waiting to tag your mirrors and knock you down. The more you lane split, the better you’ll get at judging how much space you need, but always leave yourself a little extra.2. Cover your levers. I keep one or two fingers touching both the brake and clutch levers at all times when lane splitting. If it’s a particularly aggressive crowd and we’re moving at a fair pace, I’ll cover my foot brake, as well. You need to be ready for immediate reaction when someone pulls in front of you, and they will.3. Pick a channel and stay there. I usually ride the channel between the number 1 and 2 lanes (the fast and next fastest lane), as there is less distraction, no semis or trailers, and the pace is the most consistent. Also, you rarely have merging lanes from on- and off-ramps, and I figure the nervous drivers are over in the slow lane. Yes, you may find that on certain sections of your commute, the channel between another sets of lanes is faster, but crossing several lanes to get to it and then back to your preferred lane several miles down the road, creates more risk. On my regular commute, I estimate that 95 percent of motorcyclists are riding between lanes 1 and 2.4. Maintain a straight line. Don’t weave through the channel like you’re warming up your track tires. It’s distracting to drivers and can cause them to over correct when they suddenly see you in their mirrors.5. Stay off the Botts’ dots. It’s hard to avoid the Botts’ dots and raised reflectors, but try to ride just to the right or left of them whenever possible. The slower your pace, the more likely the dots will unsettle your bike. Pay special attention when it’s damp or slick out, as they don’t have the same traction as pavement. 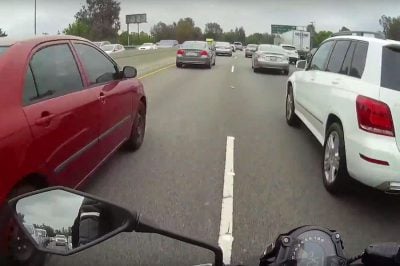 6. Don’t park yourself on the paint. Depending on how your roadway is marked, you may find the channel has a solid painted line. Avoid riding on it any longer than necessary. Paint almost always reduces traction. Again, pay special attention when it’s damp or slick.7. Avoid riding parallel to uneven pavement heights. Sometimes new pavement shows up in one lane, but not the next one over, leaving the channel itself two different heights. Trying to ride along either the high or low side is risky, as invariably you will need to shift left or right to dodge a mirror. Better to find a different channel until the repaving is completed.8. Keep the chassis taut. In very busy conditions you’ll constantly be modulating your speed, often times very minutely, as you time your passing between overlapping cars so that mirrors are staggered from one side to the next. Instead of rolling off the throttle to slow down, pull in the clutch slightly while maintaining a neutral throttle. This ensures stability, especially at slower speeds, and allows you to accelerate quicker should you need to.9. Watch for fellow riders popping into the channel. Pay special attention to large vehicles to your right that block you from seeing ahead of them. There may be a motorcyclist sliding in front of them on his way into the channel.10. Don’t be a channel hog. Keep an eye and ear out for faster riders who may come up behind you. Move over and wave them by. If you can safely hang with them, enjoy they wake they’ve created, but never ride faster than you feel is comfortable. There is always someone faster than you, unless you’re Black Devil.11. Respect turn signals. If the driver has a turn signal on, do not speed up and try to get by before the vehicle makes a move. Slow down and let the car change lanes, then give a wave as you pass. You want drivers to know how much we appreciate the heads up before they make a move.12. Freeway interchanges demand extra attention. There’s always a few last-minute lane-changers right before a freeway splits off, so be wary of unexpected dives across lanes with no warning.13. Splitting lanes on transition ramps is tricky. You do not want to be caught between two vehicles side-by-side if one driver isn’t holding his line through the turn. Give yourself extra room by staggering yourself behind, and in front of, the cars on either side. Then, wait for the road to straighten out.14. Two lanes of traffic with significantly different speeds are dangerous. If you’re riding between two lanes and one lane slows down significantly or stops, while the other is moving well, get fully into the moving lane. Once there, watch carefully for drivers suddenly diving out of the slow/stopped lane. 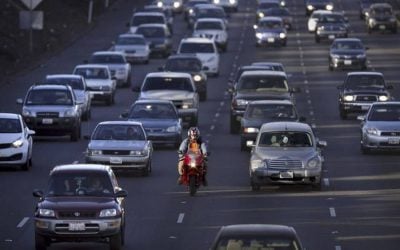 15. Don’t routinely blare your horn or rev your engine. There are one or two riders on my regular route who are constantly revving their motorcycle engines as they negotiate the channel. It’s obnoxious. If someone is playing with their phone or makeup and drifting into your space, sure, rev your engine or toot your horn. However, don’t be a nuisance as you pass by everyone else stuck in traffic.16. 18-wheelers or anybody towing are the bad boys of the playground. You absolutely do not want to pass between a semi, or a truck towing anything, unless there is enough flow for you to get by very quickly. Just a small drift from a 50-foot long vehicle can leave you between the proverbial rock and a hard place. They can knock you down with out even realizing it, and that could be catastrophic.17. Wear proper motorcycle riding gear. A full-face helmet, motorcycle jacket and pants with CE-armor (shoulders, elbows, back, and knees), and above-the-ankle motorcycle boots are all mandatory. If you fall while lane splitting, or get sideswiped by another vehicle, you need impact protection more than abrasion resistance.I can’t say I haven’t had some close calls while lane splitting, but by keeping ever vigilant of the risks I have honed my close-quarters riding skills and I arrive at work invigorated and with a smile.In general, I have found most drivers to be courteous, and many will give a little extra space when they see you coming down the channel. Presumably they’re happy that you’re not in a car, adding to the traffic. Periodically, the electronic freeway signs above Los Angeles freeways display this message: “Share the road – Look twice for motorcyclists,” to which I give a hearty thumbs up!Ultimate Motorcycling Alert: Lane splitting on a motorcycle is an advanced riding skill. Rely on your own judgment when deciding to lane-split, and only do so in a legal manner.