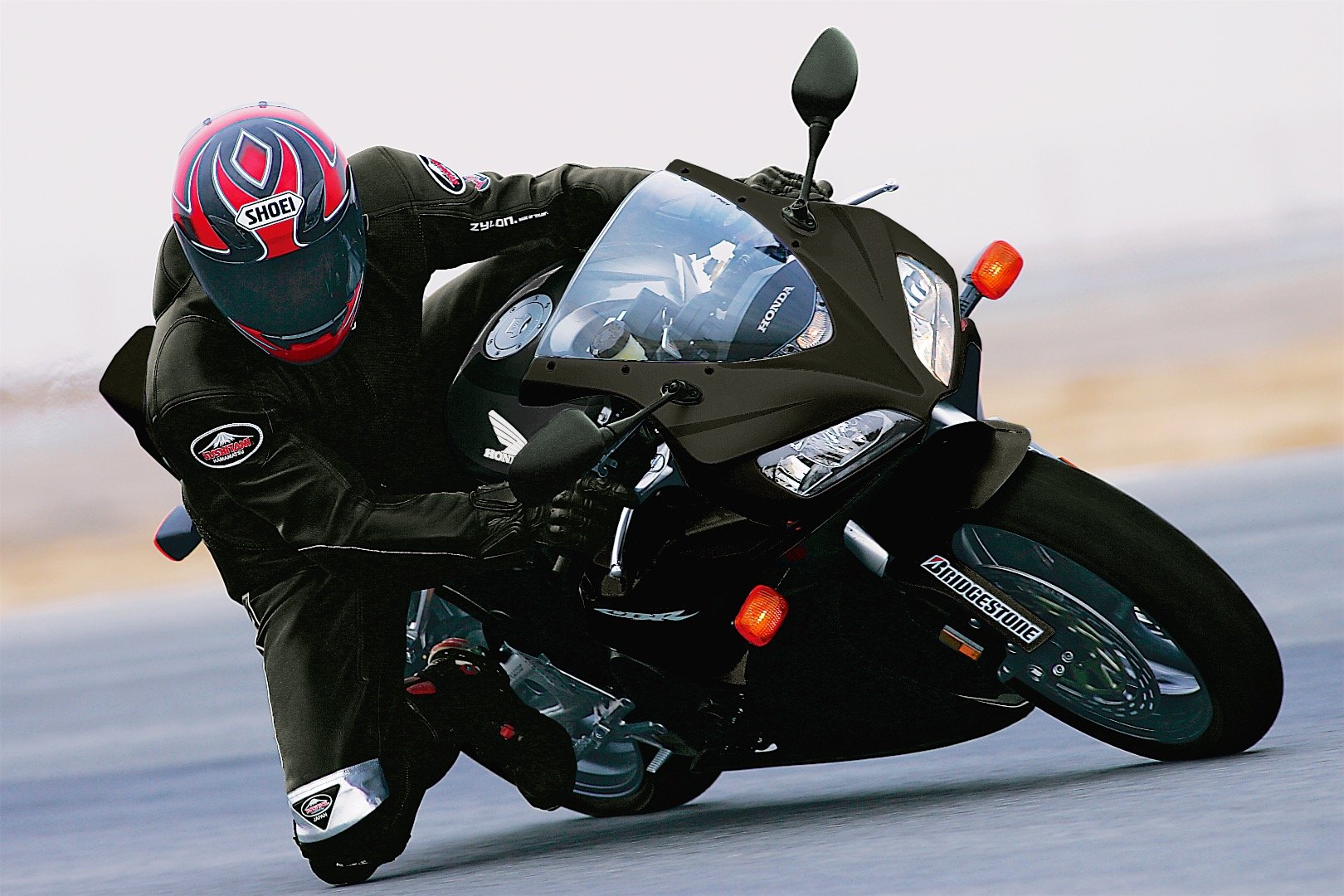 What rider doesn’t love a look back at the motorcycles that preceded today’s tech-savvy creations? Welcome to the Ultimate Motorcycling retro review archives; we’re revisiting some of our favorite reviews from year’s past, highlighting the machines that laid the rubber for what’s on the today’s showroom floors. Enjoy. – Ron Lieback, ed.From its introduction in 2004, the Honda CBR1000RR (Fireblade, in other countries) has always been a light, agile machine with astounding acceleration. In normal street riding and occasional track excursions, the CBR1000RR produced far more performance than most of us could fully tap, but somehow it was tamed into a real-world package.

Make no mistake, this weapon astonished and delighted all but the most battle-hardened veteran of the superbike wars. One would think that having produced such a beautifully balanced, incredibly fast machine, Honda would have been happy to sit on its laurels and merely tweak the CBR1000RR for 2006. But, no, that would have been too easy for a company that’s so committed to racing and technical innovation.Remembering creations such as Hailwood’s 250cc Six, the oval-pistoned V-4 NR500, Freddie Spencer’s ill-fated NS500 with the underslung gas tank, and now the superb MotoGP RC211V motorcycles, to mention a few, reminds us that Honda’s engineers clearly delight in experimenting and challenging themselves. As consumers, of course, we benefit from the racing lessons learned at HRC, and the 2006 Honda CBR1000RR is no exception.The genetic material shared with last year’s Laguna Seca race-winner is evidenced by the redesigned and altogether-sharper look of the MotoGP-inspired bodywork and all-black engine. Additionally, the new model finds itself with almost 60 percent of its parts redesigned. A slight reduction in steering head caster and trail makes the steering response quicker and improves overall cornering ability slightly. 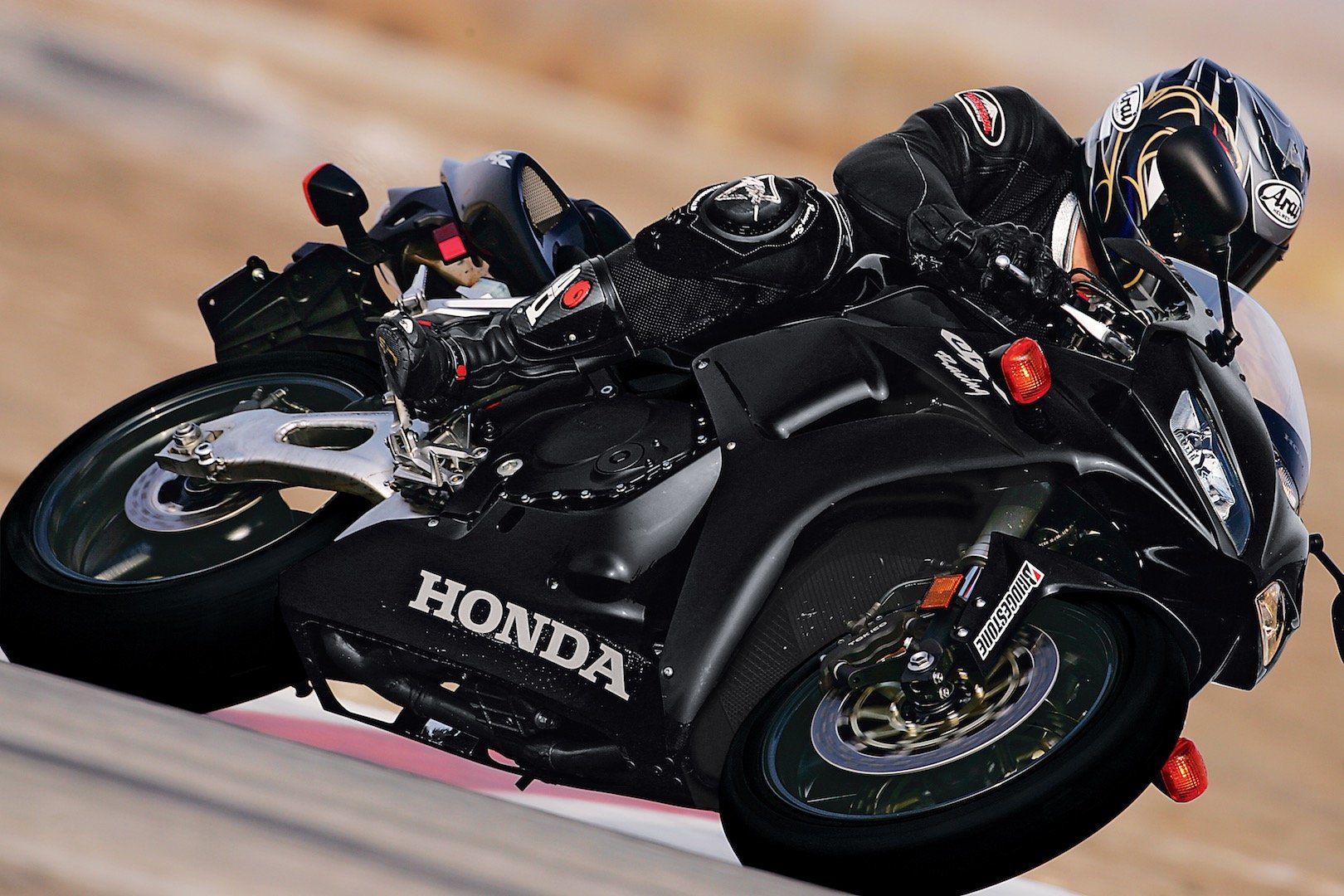 Even when the RR was first rolled out of the garage, the elegantly carried lack of weight was noticeable. The changes are all in the details, and there is no shortage of fine points that add up to a better, tighter all-around package. Although the Fireblade is 17 pounds lighter and produces three percent more horsepower than its predecessor, somehow this latest iteration of the CBR1000RR has not lost its original rider-friendly usefulness.Buttonwillow Raceway Park in California’s fertile San Joaquin Valley offers a relatively tight and twisty track for testing the newest CBR1000RR. The turns are laid out in a technical format that challenges both rider and motorcycle.Outfitted with Bridgestone Battlax BT-015 street-compound tires, the 2006 Honda CBR1000RR was immediately familiar and reassuring. The feeling of compactness, the silky smooth four-cylinder engine and the easy-to-read clocks were all there. But, there were differences too.The fast-revving engine starts as quietly as before, but the new exhaust produces a slightly stronger growl that rapidly turns to a snarl when encouraged to do so. The motorcycle certainly appeared to be slightly lighter, but the feeling is more to do with the mass of the machine being carried closer to the center, and that translates to more-intuitive handling and easier transitions from side-to-side. 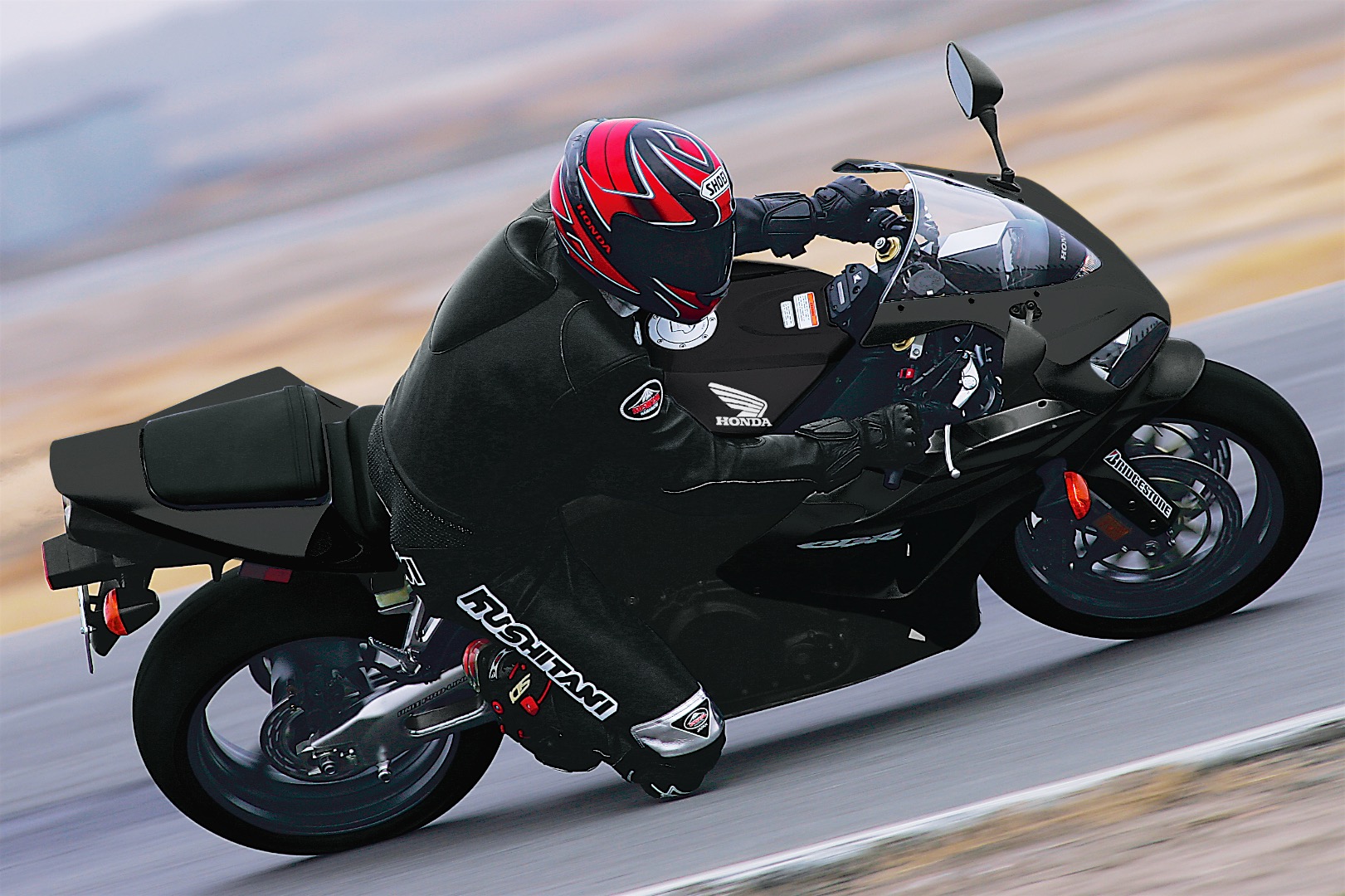 Powering out of the very sharp and poorly surfaced Turn 2 and on to the back straight at Buttonwillow, the awesome engine powers the CBR1000RR smoothly down the track like a high-pressure stream of water. There’s a rise on the track surface about halfway down that I was hitting at high revs in third gear; the front wheel was lifting gracefully and effortlessly as it crested the surface bump.Floating high-speed wheelies are an incredible feeling, if you’re on a track and in control. Although I don’t profess to be a skilled stunt rider, nothing the CBR1000RR did gave me any cause for alarm. The power is so smooth and so controllable, and the weight so balanced, that despite the instant horsepower available, the Honda never felt intimidating.Entering Turn 3 requires some fairly hard braking, especially following the antics just described. The radial-mounted Tokico calipers, coupled with a radially actuated master cylinder, work extraordinarily well. There’s a lot of travel at the lever, and every millimeter of bar-ward movement does something positive to slow down the machine.My preference of “covering” the brake lever comes from years of road riding experience, and is a habit I’ve not yet needed to disturb. On the 1000RR, however, I found that even with the slight pressure from my hand at rest I was actually making the front brakes bind a little, such is their powerful progression. 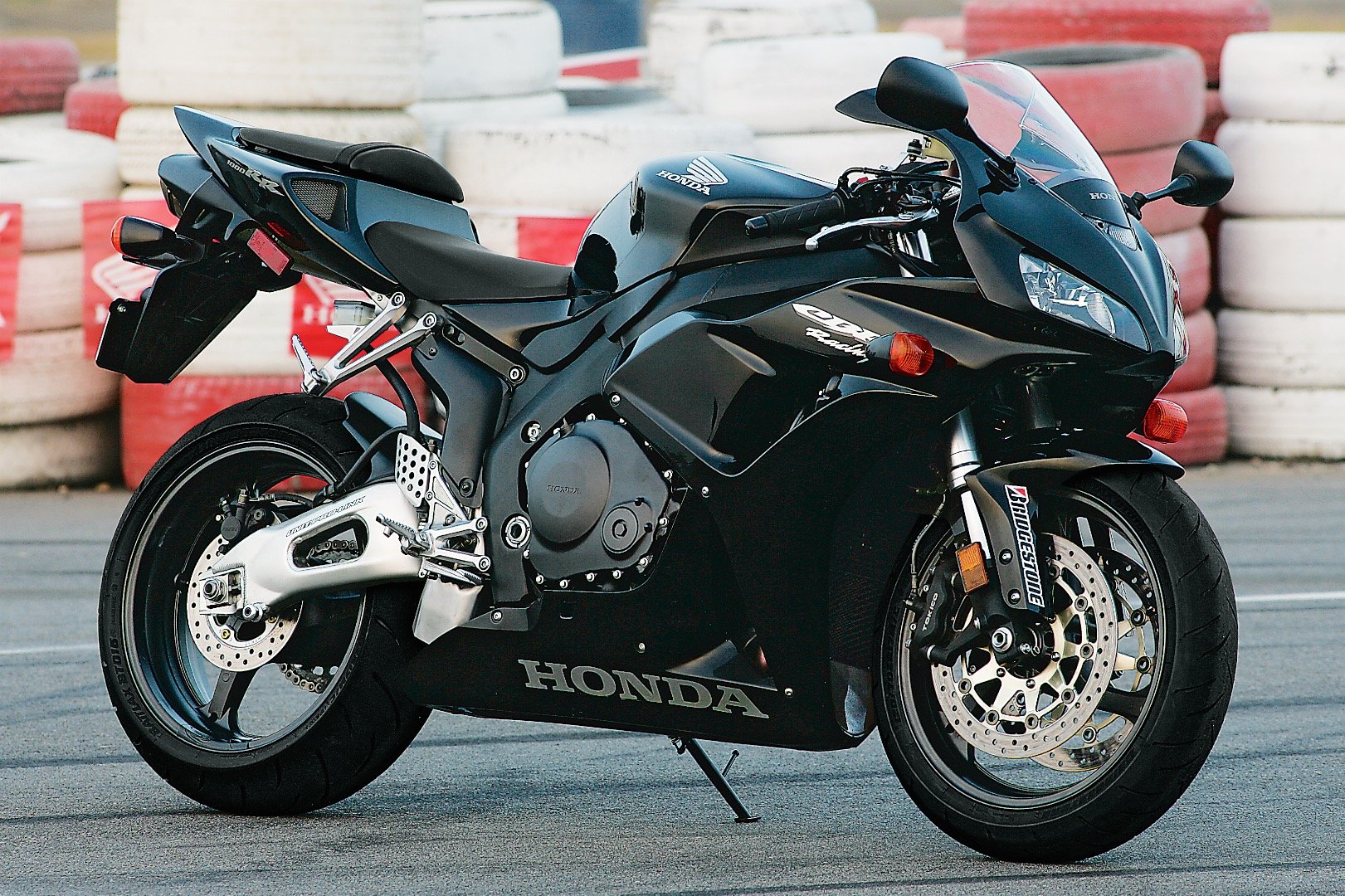 On a track, I couldn’t ask for more. However, on the road you might find yourself asking for a little less. Experimenting with different grades of pads will help you find something that suits your personal riding style.Bridgestone fitted their awesome track-compound Battlax BT-002 tires after lunch, and the difference was immediately noticeable. It’s not that there is anything wrong with the stock tires—actually, they’re excellent—it’s just that, as Bob Graham of Bridgestone explained, “OEM tires have to be manufactured to be good at everything, and naturally we build them to the manufacturer’s specifications. The track tires are actually what we want to build, and they only have to be good at one thing.”Demonstrably, Bridgestone’s experience in MotoGP has trickled down to their products in the same way that Honda’s has. The 002s, as expected, had quite a bit more grip, and excelled in helping the bike turn quickly without any loss of stability. The CBR1000RR never showed any sign of nervousness and some of that credit must go to the tires.The “nearly all-new” 2006 Honda CBR1000RR has progressed logically and very effectively for 2006. With incredible attention to detail, the CBR1000RR is better than ever, never losing sight of Honda’s goal of providing us with motorcycles we can actually use. To their obvious pleasure. James Toseland and the Winston Ten Kate World Superbike team just found this out in the first race of the new season. Winning is in the details, and I suspect theirs won’t be an isolated win this year.Photography by Kevin Wing 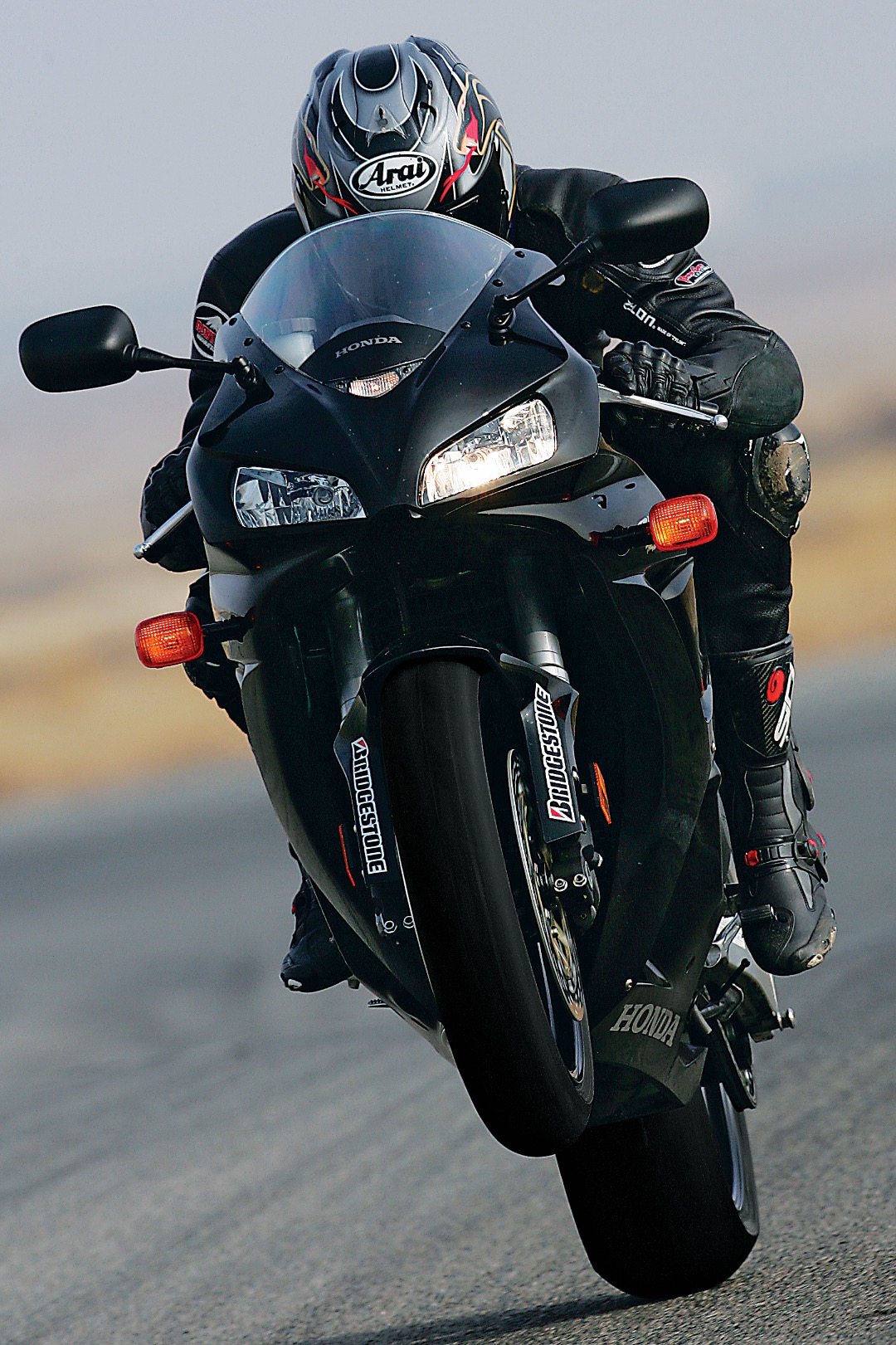