Launched in 2014, it wasn’t all that long ago when Honda released the Grom. The bike sparked a huge amount of interest in the lower displacement market, and left an impression to the trending “hooligan” market.Traditionally, smaller stature/lower displacement machines have done well in the world market, especially in areas with heavy population density. But the tides began to turn and the American motorcycling audience finally – after many years – begin giving some love to the little bikes.Since 2013, the Grom has remained largely untouched, and Honda didn’t offer a 2016 version. For 2017, it’s getting a refresh that has a healthy dose of just what the market ordered – a bit more hooligan personality injected into it.We will now get used to the Grom stalking the streets with stacked LED headlight layouts, a flip-key, aggressive handlebars, under-slung exhaust, and a higher passenger seat, just to name a few of the new features. The biggest changes come on the surface, which are a nice refresh to the plastics throughout the bike, along with some more charisma in the color scheme. 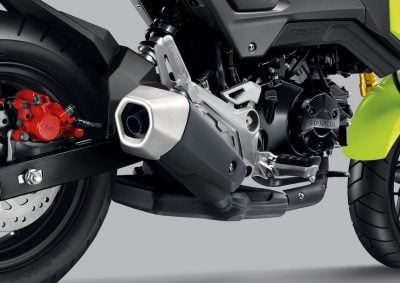 This comes hot on the heels of the Kawasaki Z125 Pro release – the Honda Grom’s aggressively styled competitor. Will it outdo the Z125 Pro?  Regardless of styling, both the Grom and Z125 are devilishly fun bikes, fit for the beginning rider or the journeyman who wants to flex his prowess.“We’re excited to refresh the Grom with an assertive new look for 2017,” said Lee Edmunds, Manager of Motorcycle Marketing Communications at American Honda. “Since its 2014 introduction, this fun-loving motorcycle has been a big hit in a little package, single handedly establishing a thriving market for small-wheeled, small-displacement, big-personality road bikes that lend themselves to personalization. Now, the Grom’s styling is even more exciting without losing any of the original’s fun appeal.”We’d agree that assertive is an apt way to describe the new Grom, and given Honda’s history of conservatism when it comes to design, I hope this is the beginning, along with the Africa Twin CRF1000L, to a departure from those somewhat bland aesthetic choices.The 2017 Honda Grom will be available in Matte Gray Metallic, Pearl Red, Pearl White, and Bright Yellow. It’ll be available this August with an MSRP of $3,199.