Moto Guzzi has reprised its exalted Eldorado by utilizing the 1380cc powerplant of the much-of-the-present California 1400 Custom model platform we have been riding since 2013. Its designers have, for obvious reasons, adhered nicely to its heritage by giving it the early Eldo’s signature gloss black paint, white pinstripes and chrome panels on the fuel tank with more chrome slathered throughout.While the new Moto Guzzi Eldorado is only similar to the old in terms of the ubiquitous longitudinal air-cooled V-twin engine layout, shaft drive and floorboards, the paint and chrome immediately harken back to yesteryear. This is truly the modern incarnation of the old machine.Originally offered as an 850cc model from 1972 through 1975, the Eldorado gained many fans back in the day for its rugged good looks and the Guzzi mystique, which may be as strong today as then. The new Eldoradoers more of the same goodness, with a look that drew admirers at every stop I made.The 80-mile freeway run from pickup-point to my garage was a choreographed highway dance with a partner that knew all the right steps. The handling, in cruiser circles, was without peer, as it made short work of threading through the eye of the needle that is Los Angeles traffic.Nimble and firmly sprung, a hard-leaning, fast lane-change with a lot of throttle input was met with a graceful, stable reaction. The taut rear suspension and steel frame combination are devoid of any wobble, noodle, or jacking during most riding and the only downside is the occasional shot in the kidneys when the Eldorado’s rm suspension meets large road imperfections.It is difficult to unweight your bottom with forward controls, but a pull-up on the high, wide handlebars helps. The front end does its job as well, and the whole package is even-tempered and well mannered.Along with the Guzzi’s exemplary handling and excellent braking, the rumble of the V-twin is a wonderful soundtrack for riding—so much so that I turned o my Bluetooth helmet music player just to hear the syncopated sound of that exhaust and those eight valves working on my behalf.I’ve run this muscular (96 peak horsepower; 88 ft/lbs of torque) 700-pound cruiser through city streets and spent time with it in our fast mountain passes and found its charm and sweet spots. The Eldorado pulls extremely hard o idle — be ready for the rm upshifts required — and the motor runs happily right to redline at 7000 rpm without losing much juice at the top. The throttle is by-wire, with cruise control, traction control, and three power modes, naturally; the feel is nice and linear with no at spots or o -idle hesitation in any mode.While the big Guzzi won’t keep up with the sport bikes, it will impart on the pilot a desire to get in the cruiser mood and be happier for that. Mind you, the Eldo has the ability to scrape floorboards in tight corners, if you insist (though cornering clearance will accommodate most), and the power to pull hard o the apex so you won’t be too far behind. If allowed, it will set a very satisfying pace for most riders that is well kept in check by a pair of radially mounted Brembo calipers up front.Our test bike was equipped with two accessories—real leather saddle- bags and a windscreen. Yes, they are utilitarian, but I feel the lines of the Moto Guzzi Eldorado without them are perfection.Photo by Don Williams 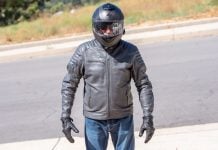 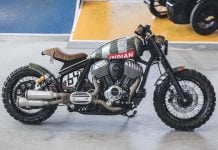 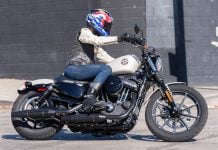