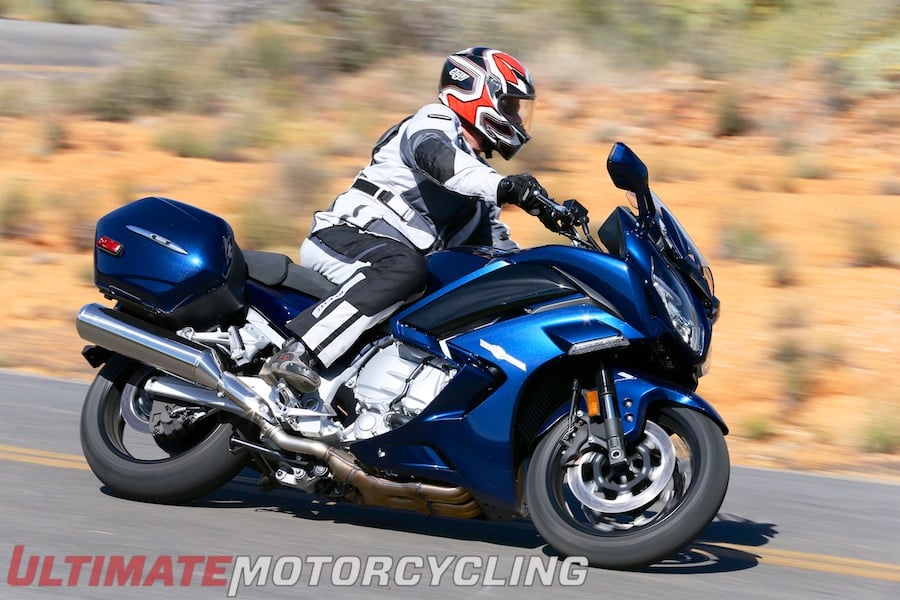 With the 2016 FJR1300ES, the version of the FJR with electronic suspension, Yamaha continues its quest for perfection with a newly evolved edition with few changes that make a big difference. The most important update to Yamaha’s flagship sport-touring machine is the replacing of the oft-maligned five-speed with a six-speed transmission, which includes a rethinking of how the transmission works. Other updates include the clutch, the dashboard, and there’s something new in the lighting department. Let’s get to the Quick Facts on the Yamaha FJR1300ES.1. The FJR1300’s new transmission is a very big deal. The changes to the Yamaha FJR1300ES tranny have three dimensions, and they’re all important.2. First off, Yamaha engineers pulled off a clever trick by putting a six-speed transmission into the same cases that housed the FJR1300ES’ old five-speed–if they couldn’t have managed that, you wouldn’t have seen a sixth gear this year. Making this all work required separating the shift dogs from the gears, and removing a central cluster. Again, brilliant job.3. Second, the gears are now helically cut for quiet and smoother operation. When cruising along, the FJR1300ES is whisper quiet and smooth. Shifting is also effortless, even when speed shifting, sans clutch (a bit more about the clutch later).4. Finally, the gear ratios are rejiggered so that the FJR1300ES has the equivalent of a close-ratio five-speed transmission–first is higher than previously, and fifth is lower. That makes the new sixth gear the equivalent of an overdrive that is 10-percent higher than the old fifth cog. In conjunction with the helical gears, the level of fatigue encountered riding the FJR1300ES is greatly reduced–quiet and smooth make a difference over the long haul. 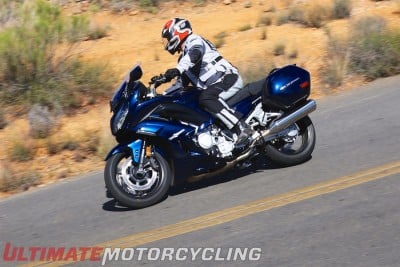 5. The new LED headlights for the FJR1300ES are a bright idea. While in the standard mode, the change isn’t that different, except that the cut-off line between lit and dark is quite stark (and aim can be adjusted without tools). However, when you hit the high-beam switch, be prepared for a flood of light in front of you. It is impressive.6. Yamaha’s new Lean Angle-Sensitive LED Cornering Headlights are a mixed bag. Above the new quad-element LED headlights are three banks of lights on each side. As the FJR1300ES is leaned into a corner, the light banks illuminate to help you see into the corner. In practice, the results aren’t quite perfect. Up in the canyons, if you’re on the outside of a corner, the LEDs do a good job of lighting the dark portion to the left and in front of you.But, if you are on the inside lane of a corner, the LEDs light up any vegetation on the inside of the turn, actually making it more difficult to see ahead. Also, the biggest problem is the tilting of the headlight projection horizon. Solving this problem would make a bigger difference after dark. In town, the Lean Angle-Sensitive Cornering Headlights work considerably better and are more useful. Still, when turning around in a cul-de-sac and heeled over, the lights don’t shoot out far enough and don’t offer much help. It’s a fascinating technology that just needs a bit more functional capability.7. The 2016 Yamaha FJR1300ES also gets a new assist-and-slipper Clutch. The slipper function does work during aggressive downshifting into corners, and the assist function claims to reduce the lever pressure needed by 20-percent. Without a 2015 version to directly compare it to, that’s difficult to quantify, but the 2016 clutch is not fatiguing in freeway traffic or in-town. Yamaha cuts the grip needed by using lighter springs, and designed the clutch to use engine torque to press the clutch plates together during acceleration.8. Yamaha didn’t make a big deal out of it, but peak torque is up from 99 ft/lbs at 7000 rpm last year to 102 ft/lbs at the same rpm. The likely source of the increase is improved fuel metering, as the valve train remains unchanged. This improvement is multiplied by the six-speed transmission, making the 2016 Yamaha FJR1300ES feel perceptively faster than last year’s version.9. Yamaha has updated the FJR1300ES’s LCD dash display. The big difference is the large digital mph on the center screen. That’s the number I want to see, and you can’t miss it. The interface that allows you to access the electronic suspension modes, heated grips, and windshield height remains intuitive and useful. Also, Yamaha claims a glare reduction treatment on the screens. We rode in harsh sunlight and could still read the LCDs, so it seems to be effective.10. The 2016 Yamaha FJR1300ES is the best FJR yet. With additional power and a slick new gearbox, the FJR1300ES is both a better sport bike (tighter gear spacing) and better tourer (taller 6th, quieter helical gears). The LED headlights and taillights are icing on the cake, along with the new dash. It may not be enough for you to upgrade from the previous generation of FJR1300, but the more you think about it, the more you’re going to want that transmission with that fantastic motor and chassis.Read our 2016 Yamaha FJR1300A Review | 10 Quick FactsPhotos by Brian J. NelsonRiding Style