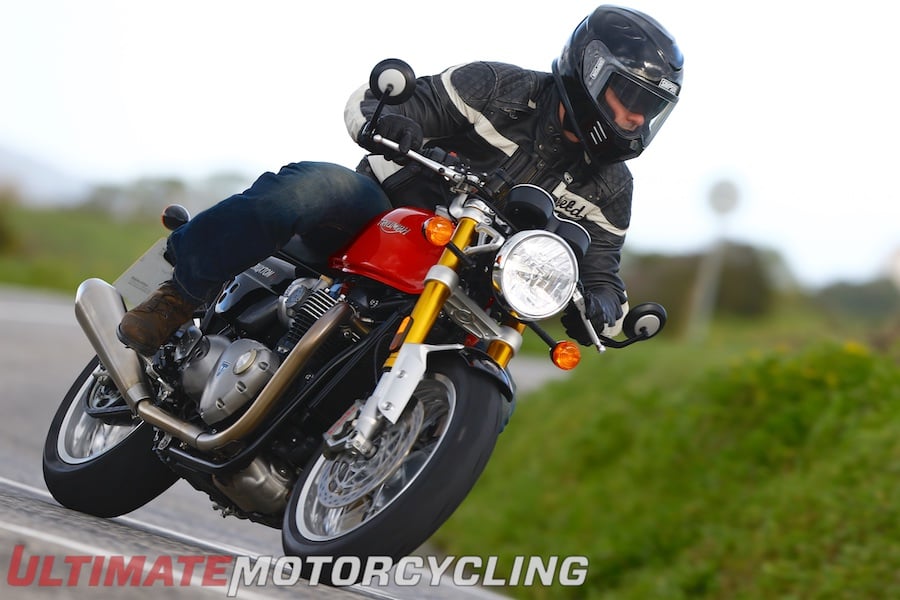 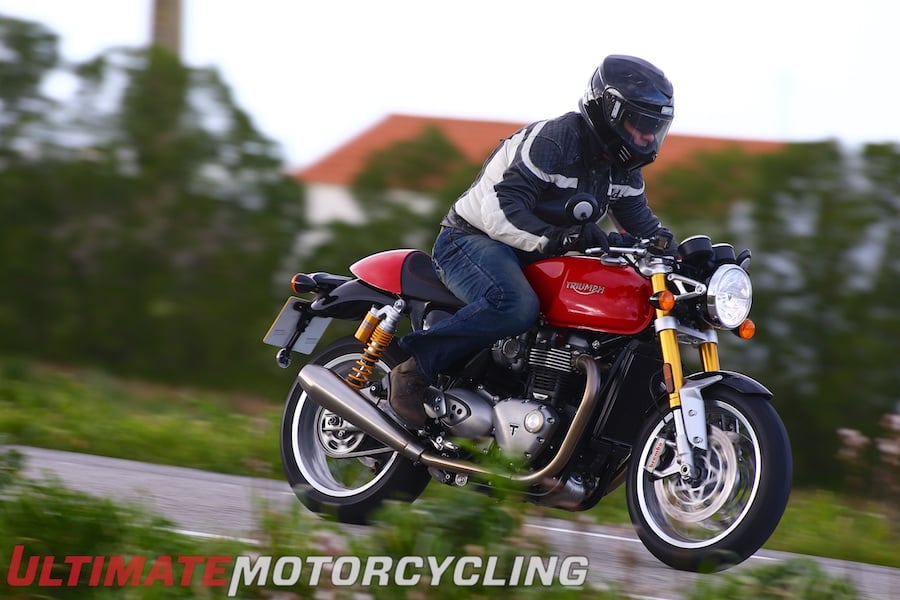 Here are 14 Quick Facts you need to know:1. The Thruxton R is effortless to ride. A push here, a suggestion there and you’re well on your way to enjoying the mountainous roads near you.2. Handling is the Triumph Thruxton R’s forte. Featuring a shorter wheelbase, steeper rake and shorter trail than all previous iterations of the Thruxton, tipping in is delightful, to say the least. At low speeds the bike doesn’t show its claimed 448-pound dry weight. Pulling into parking lots and maneuvering in traffic can be done just as well as its upright cousin, the Bonneville T120. When pouring it on through a corner, the bike is responsive as ever and holds lines just as it should.3. Showa and Öhlins suspension. With Showa 43mm big piston forks and dual Öhlins shocks—both ends fully adjustable—the Thruxton uses brands that we’ve all come to trust over the years. Though the suspension is race-inspired, it certainly isn’t overly firm for the street. From the factory, Triumph has chosen to keep it reasonable, with enough stiffness to keep you locked in your lines without any discomfort along the way.4. The Thruxton R is liquid cooled, which is a first for this generation of Bonneville bikes. Purists may balk, but it’s been done in a way to retain the stylistic identity that is integral to the Thruxton and Bonneville T120 lines. The main reason Triumph went water cooled—to meet Euro 4 emissions standards.5. ‘High Power Engine’. Dubbed the ‘high power engine’ by Triumph, the Thruxton R uses the same 1200cc SOHC vertical twin architecture as the Bonneville T120, but with some key differences. The low inertia crank and increased redline (by 500 rpm over the T120) make for a much more lively experience. The Thruxton spins up from low rpm quickly, making use of a linear torque curve. Featuring a claimed 97 horsepower at 6750 rpm and a claimed torque peak of 112 ft/lbs, the Thruxton powerplant provided all I could ask for in the Thruxton R chassis, and certainly more than I needed to have fun in Portugal.6. Driving out of corners is exquisite on the Thruxton R. Feeling the front end lift when a healthy dose of fuel is mainlined into the twin throttle bodies is beyond invigorating but with a bike like this, it’s about getting in the torque band and making use of its grunt. Vance & Hines provide the soundtrack that will keep you rolling the throttle on from way down low in the rpm range.7. Ergonomically masterful is the best way to describe the Thruxton R. Unlike most café builds, the Thruxton R is spacious and in no way became taxing to ride. Quite the contrary—after spending several hours on the bike, I experienced no soreness in the least bit. A maneuverable, comfortable solo seat is certainly doing its part in that department.8. The 2016 Triumph Thruxton R knows how to stop. If you take a fistful of the front brake or stomp on the foot pedal, you’re going to meet some surging in the pedal or lever due to the ABS. But, thanks to the Brembo 310mm floating rotors, complete with Brembo M4 calipers and a single 220mm caliper taking up the rear, the main thing you’ll be doing is stopping quickly.9. Triumph has designed the Thruxton with ease of use in mind. A lot of this can be directed at the torque assist clutch. Clutch pull on a 1200cc bike can be done with a single finger, and clutch-less shifting is flawless. It has a good tactile response, and comes in and out of gear perfectly. Combine those aforementioned elements, along with the magnificent ergonomics, and you have something that is quite special.10. Triumph has been aggressive in modernizing the Thruxton R’s functionality. Switchable ABS, switchable traction control, three riding modes (Rain, Road, Sport), and ride-by-wire throttle greet you when in a pinch. All electronics are switchable on the fly with the exception of turning off traction control—you have to be stopped for that one.11. A classic feel is still present in the Thruxton R’s modern dash. Twin 3D clocks up front round out the gorgeous vintage looks of the Thruxton R; tastefully tucked away is the LED screen. Easy to use, all of your electronic settings are controlled with a simple flick of buttons at your left and right. No need to trundle through a confusing menu—it’s all right there.12. Customization is king in the café bike world. Again, Triumph is offering up 160+ unique items to bolt onto the Thruxton, and placed some choice combinations into three different packages—Track Racer, Café Racer, and Performance Race Kit. These packages, which are completely customizable, begin at £1275 for the Café Racer, £1620 for the Track Racer, and there’s no price yet on the Performance Race Kit.13. Triumph wisely chose to build upon the unshakable foundation that was established more than five decades ago. The Triumph Thruxton R’s hallmark design choices are all there, including sleek lines that draw the eye from end-to-end, unimpeded. The Thruxton R has a solo seat, tight rear cowl, clip on bars and an attention to detail that is unmatched when it comes to the fine minutia of making every component shine in its own unique way. The Thruxton R certainly seems to live up to its slogan of, The Ultimate Café Racer.14. The price. The 2016 Triumph Thruxton R has an MSRP of $14,500, and will be available in Diablo Red, Silver Ice and Matte Black.RIDING STYLE
Helmet: Simpson Ghost Bandit
Jacket: Held Harvey 76
Gloves: Held Touring Touch
Jeans: iXS Cassidy II
Boots: TCX X-Blend