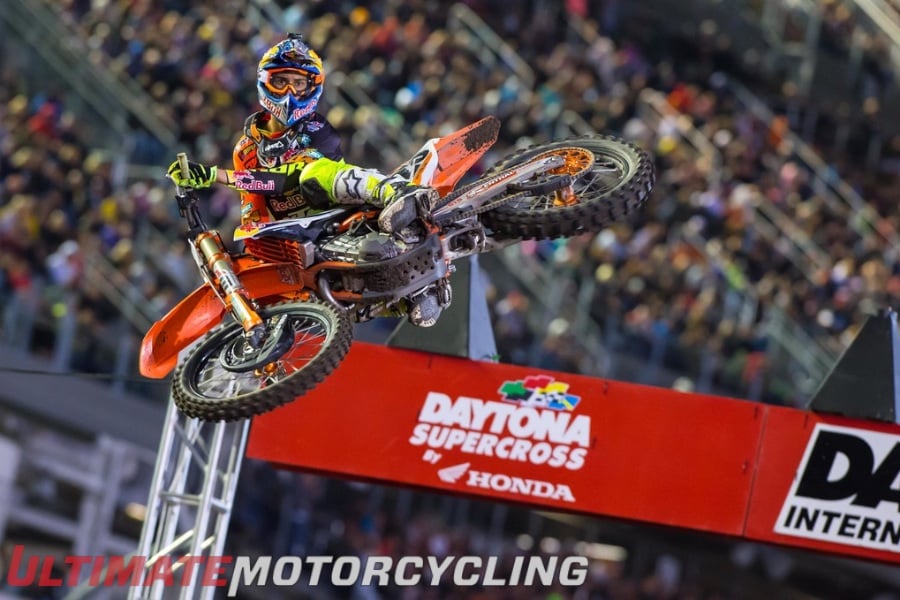 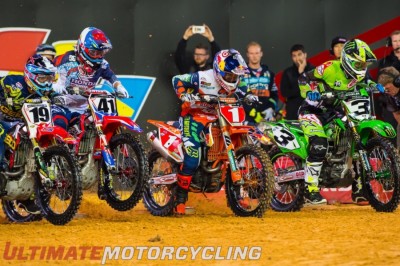 It was Eli Tomac’s day from start to finish at Daytona International Speedway as he won Round 9 of the Monster Energy AMA Supercross series. It was Tomac’s first win of the 2016 season, and comes at the midway point of the year.Tomac, riding for Monster Energy Kawasaki, was the fastest qualifier, won his Heat, and led all 20 laps of the Main on the Ricky Carmichael-designed track on the Daytona Infield that offered few passing opportunities.Points leader, Red Bull KTM’s Ryan Dungey, attempted to make it tough on Tomac, nominally grabbing the holeshot in the Main. However, Tomac quickly got by Dungey, who then made a small mistake that allowed Tomac to escape. Dungey attempted to pressure Tomac, though Dungey was never able to show Tomac a wheel on the uncharacteristically tight Daytona track. A final late-race rush by Dungey was repelled by Tomac, who has just one podium in the 2016 Monster Energy Supercross season, and finished a disastrous 11th the previous week in Atlanta. 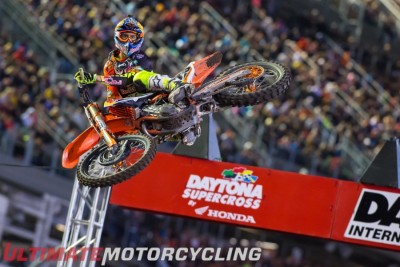 Red Bull KTM’s Marvin Musquin, who had his first race win snatched from his grasp on the final lap at Atlanta, ran with the two leaders early on, but Tomac and Dungey eventually pulled away. Musquin was never a threat for the win, but had a secure hold on the final podium position. Daytona is Musquin’s second consecutive podium, and he won his Heat race earlier in the night.Riding a very lonely race to finish 4th was Rockstar Energy/Husqvarna Factory Racing’s Jason Anderson. Although he qualified out of the Semi, he was 5th at the start. Anderson took three laps to pass Autotrader/Monster Energy/Yamaha’s Phil Nicoletti, and then settled into the position for the remainder of the night. It was Anderson’s eighth top 5 finish in nine races.It was a difficult night for Soaring Eagle/Jimmy John’s/Suzuki Factory Racing’s Ken Roczen. Roczen came into Daytona 2nd in the Monster Energy Supercross standings, though he struggled to 6th in Atlanta. Qualifying 6th in the afternoon, Roczen transferred out of his Heat race, but in 4th position. Roczen started 10th, and picked his way through the pack, to finally finish a distant 5th, though he did close to within three seconds of Anderson at the finish.Roczen retained 2nd place in the Monster Energy Supercross series standings, but is now 39 points behind leader Dungey. Roczen sits 11 points ahead of Anderson, who has a nine-point lead over Daytona winner Tomac. HRC Team Honda’s Cole Seely finished 10th last week at Atlanta and again at Dayton, and slides to 5th in the standings, nine points behind Tomac.A surprise performance was turned in by Josh Grant, who came out of retirement to race an HLTN CO-backed Suzuki RM-Z450. Although Grant qualified 13th in the afternoon, he went to the Main by taking 4th in his Heat, beating factory-backed Anderson, Seely, and Blake Baggett. 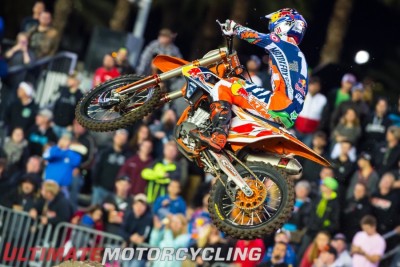 Grant was 9th off the start and had a long battle with Rockstar Energy/Husqvarna Factory Racing’s Christophe Pourcel; Pourcel stalled early after getting a strong start, but was able to refire the electric-start FC 450 quickly. Grant bested Pourcel for 7th, though the duo never challenged HRC Team Honda’s Trey Canard, who was all alone in 6th. BTO Sports/KTM’s Davi Millsaps had a solid ride in 7th until he crashed out on Lap 19, dropping Millsaps to 19th, one position ahead of struggling Autotrader/Monster Energy/Yamaha rider Weston Peick. Millsaps was taken to the hospital, having suffered two broken ribs and a partially collapsed lung.Monster Energy/Yamaha Factory Racing’s Chad Reed never got going the entire day. Qualifying 18th after finishing on the podium in Atlanta last week, Reed had to go to the LCQ to make the Main. A multi-time Daytona winner, Reed finished in 12th behind BTO Sports/KTM’s Justin Brayton (9th), Seely (10th), and GEICO Honda’s Justin Bogle (11th).Yoshimura/Suzuki Factory Racing’s James Stewart’s comeback from a concussion in Round 1 continues to flounder. Lapped and involved in a controversy in Atlanta, Stewart went down hard in the whoops on the opening lap of his Heat, ending his night with a leg injury.Photography by Simon CudbyNext Round: March 12, Rogers Centre, Toronto+. Round 10.TV Schedule: March 12, 7pm (EST); Fox Sports 1Results: 2016 Monster Energy AMA Supercross, Round 9, Daytona International Speedway, Daytona Beach2016 Monster Energy AMA Supercross Standings (after 9 of 17 rounds)