I’ll be blunt. I’m a V-twin guy. I own six sport motorcycles – five are V-twins, and one is a V-4. The V configuration’s torque mid-range is what has mainly kept me off inline fours for what seems like decades.Enter the 2015 BMW S 1000 RR, and this revised Bavarian missile has piqued an interest into my V-trained soul. When the original S 1000 RR launched in 2010, I said no. But fast-forward to 2015, and six years of refinement created something that shunned my V-twin craze. The engine’s character is, dare I say, V-twin like. Add perhaps the savviest electronics in existence, and BMW creates a formula that anyone craving safe speed must experience.

My debut on the new RR was at the Circuit of the Americas (COTA) on a sub- 50 degree-day in March. The 1993 500cc GP World Champion Kevin Schwantz aptly deemed the circuit’s intense layout with multiple elevation changes—including a 133-foot high Turn 1, roughly half the size of COTA’s observation tower—as “one of the most physical tracks to race at anywhere in the world.”Challenges at the 20-turn track are many, including the blind corners and the left-hander after the long back straight, where the industry-wide 186 mph speed limiter is achievable. When these challenges combine, one begs for a forgiving motorcycle, and the third-generation RR is just that motorcycle. 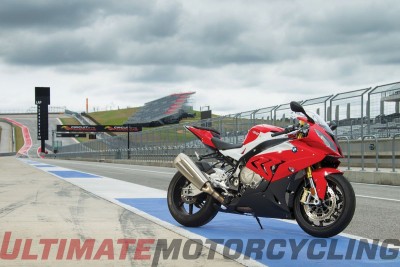 The first attraction is engine character; compared to previous-generation RRs, torque begins sooner—just before 5000 rpm—and ascends evenly to about 9600 rpm where it flattens until falling off around 11,000 rpm. The V-twin-like torque curve was evident at COTA’s esses that run from Turn 2 through Turn 6; I was able to short-shift the bike into third, and optimal power was always on hand.The RR’s powerplant received a massaging of the air intake, cylinder head, camshafts, crankcase, and exhaust system, with the latter losing the front silencer, which helped shave 6.6 pounds and creates pure music. The bike now weighs a claimed 449 pounds with a full tank of gas and Race ABS.The revised 999cc inline-four produces 199 horsepower at 13,5000 rpm—six more than the previous generation. It also arrives with a more linear-torque curve that peaks at 83 ft/lbs at 10,500 rpm. For those who like screamers, the engine still has a rev limiter set at a lofty 14,200 rpm.

The RR’s chassis is also updated for improved handling, and the changes that are quickly noticed are a tenth-inch lower swing-arm pivot, and a nearly inch-longer wheelbase for a new total of 56.6 inches.As speeds increased at COTA, electronic rider aids superseded my love of the refined engine character. My test bike included Ride Modes Pro (Slick and User, added to Sport, Race and Rain); Race ABS; Dynamic Traction Control (DTC) with bank-angle sensors that provide TC while leaning; Dynamic Damping Control (DDC); heated grips; and the one that surely makes you feel like a championship racer, Shift Assistant Pro (clutch- less upshifts and downshifts!). Working together in nearly perfect harmony, these assists (all part of the Premium Package, which also includes lighter forged wheels) made riding feel somewhat effortless at the mighty COTA.With the Premium Package, the S 1000 RR is basically an HP4, though BMW engineers say the DDC is further refined on the new RR, and this is the reason why the HP4 is no longer available. BMW insists that the 2015 S 1000 RR with the Premium Package is actually better than the HP4, and arrives much cheaper—a must for a track junkie. 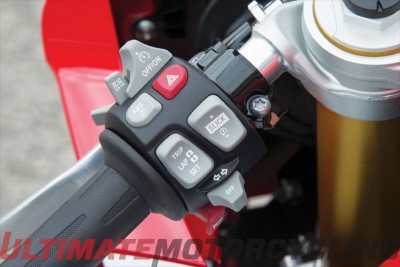 BMW’s DDC is the gem; it gives stability under every situation, whether hard on the binders or WOT on exit. If you make a mistake — as I did frequently at COTA—the DDC’s non-intrusive manner keeps the mind in focus. DDC arrives softest in Rain mode, and firmest in Slick, and has the capability of +7 / -7 fork damping (rebound and compression) on the fly. Smaller adjustments are also made to the rear shock.I used the Sport and Race modes during the opening 20-minute session, which were basically sighting laps. The beauty of all the electronics, such as riding modes on the 2015 S 1000 RR clad in Pirelli Diablo Corsa tires, is that each adjustment can be made in motion. Sport and Race modes use preset ABS and DTC maps.The most evident changes in Race mode are a stiffer chassis under heavy braking, and lessened intervention of DTC and ABS. In Race mode, the ABS has reduced rear-wheel lift mitigation, which is noticeable during the faster braking sections.Under heavy braking in Sport and Race modes, I felt some pulsating at the lever. Also, the initial bite of the Brembo brakes on the dual 320mm discs is abrupt, and you quickly learn that light pressure from a single finger is most effective.When the first-session pace picked up, I switched back and forth between Sport and Race modes, and noticed that the yellow light in the top left corner of the dash flickered less in Race, meaning far less intervention.Other displayable content includes banking angles, and the ABS/DTC intervention. The banking angle remains displayed for a few moments after steep lean, and by the end of our first session I viewed 55 (degrees) a few times. That’s not bad, and I’m sure things got better as the day’s pace progressed.However, after wanting to see 180+ mph on the back straight, I totally blew turn 12, and ran off the track, so I quickly went back to my “don’t look at the dash” rule, and relied on noise and the bright-white shift light for shift timing.

During the afternoon sessions, I only used Slick and User modes, which also arrive with Launch Control and a Pit Lane Speed Limiter. I didn’t have a chance to use either of the latter, as too much time was spent learning to fine-tune the DTC in Slick mode.Slick features Race Track ABS that shuts off when using rear brake in situations such as keeping the front end off the ground in bumpy sections (there’s no rear-wheel lift detection in Slick mode), a track-oriented DDC, and a DTC that allows for +7 / -7 changes on the fly. My favorite setting quickly became +4, which provided seamless intervention. The least intrusive I chose was -4, which lets the back tire spin up around a few of the hairpins, and allowed for massive wheelies.Everything is selectable in User mode, enabling you for example, to pair the Rain mode with a firmer DDC and Race ABS. Though I experimented with User mode, I felt no need for anything other than Slick — it’s just that good. 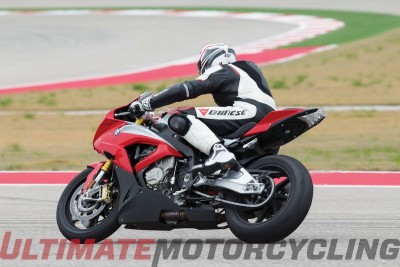 There is also the Shift Assistant Pro, which BMW claims is the first for a production sportbike. This allows clutchless upshifts and downshifts, and can be switched to a MotoGP reverse shift pattern in under a minute (remember to use Loctite after switching).While learning, I lost focus many times, mostly for lack of trust on rev matching when banging down through the gears. Fortunately, once I was able to trust the automatic blipping, I completely forgot about the braking/blipping/ downshifting process, which allowed for complete concentration.The DDC complements Shift Assistant Pro by preserving chassis stability while downshifting. Initially, I was keeping pressure on the shift lever when down- shifting. After the first click down, release pressure on the lever so the sensor can reset, and then click down again.

From a track standpoint, 1998 AMA 250 Champion Roland Sands who rode with me at COTA, said it best—the RR provides “absolute speed with absolutely no drama.” I concur; when a bike is this good, it allows riders to remain completely focused—something vital to not only quicker lap times, but also safety both on and off the track. The previous generation was quite good, but things only got better for the 2015 BMW S 1000 RR, which is essentially a perfected platform.2015 BMW S 1000 RR Test Riding Style Photography by Kevin WingStory from Ultimate MotorCycling magazine.