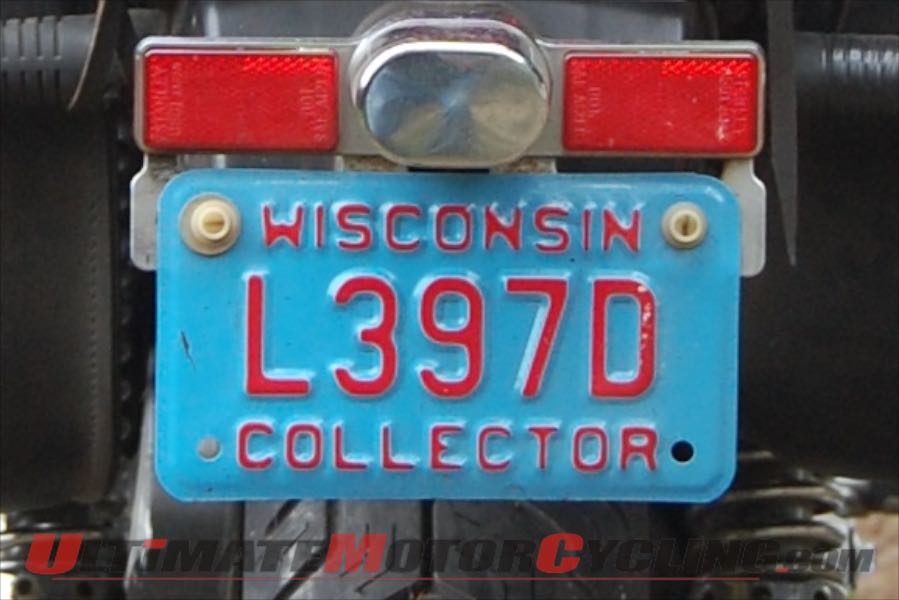 Here in the upper Midwest, the weather has a way of inflicting a particularly onerous kind of torture on motorcyclists. In the middle of winter — January and February, no less — there is the phenomenon known as “the Thaw.” It is motorcyclist purgatory.The Thaw happens when unseasonably warm weather sets in with temperatures soaring into the 40s, 50s and sometimes even higher. Snow melts, leaving the ice layer beneath wet and slicker than hog snot on a wet marble. It feels warm enough to take a little ride, but the coefficient of friction may be lacking here and there.Yes, in the upper Midwest, it is possible for temperatures to be considered as “soaring” even when they go no higher than 42 degrees. Such days on a weekend are a mixed blessing for motorcyclists who already getting a little shack-happy from being cooped up in the house most of the time and with darkness falling by 5 p.m.On days like that, they are drawn to their garages where they tinker with their bikes, maybe start them up, move them around a little in the garage and if roads are reasonably clear and mostly dry, they may even be tempted to take to the road. Unless, that is, they live in Wisconsin and the bike qualifies for special license plates and it’s January. Let me explain.Here in Wisconsin, special collector license plates for old motorcycles are available—with the added benefit of never having to be renewed. I have several old clunkers licensed that way. Pay the up-front, one-time fee and you never have to renew the registration on that old bike again, unlike non-collector bikes that have to be renewed every two years.Of course, there are a couple conditions that apply to these special plates. One is that the bike must be at least 20 years old; another is that the collector bike cannot be your only vehicle; you have to have some other vehicle that is your primary means of transport.You have to submit photos of the bike — I’m not sure why. Perhaps the most bizarre and ironic of the requirements is that you cannot operate the collector bike in the month of January—in Wisconsin. Seriously.So, to stay within the good graces of Wisconsin’s rather odd collector motorcycle license plate law, even when the Thaw takes place in January, the bikes with the distinctive sky-blue license plates that say “Collector” along the bottom must remain in the garage. 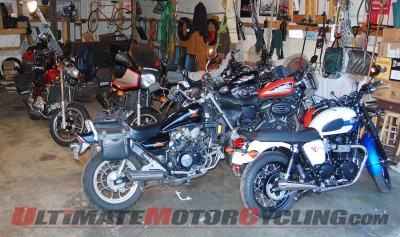 On this occasion, that was really not much of a problem — warm as it was, my driveway is still sheathed in ice and in driving my car around the area, I realized that shaded areas on the roads I like to ride on had stretches where ice had not melted off completely so riding a bike, new or old, really wasn’t a good idea.So, in lieu of riding a bike, the shack-happy rider tinkers with the bikes. In my case, I spent part of the afternoon pulling the bikes out of their respective spots in the garage and started them up. Starting the bikes is always an interesting exercise after the machines have been sitting for weeks at a time, in an unheated garage.The late model Triumph and Harley with EFI start immediately. The 1999 Sportster with a carburetor and Stage II kit — not so much. Even with fresh triple platinum spark plugs, it tends to require a little bit of a work-out for the starter before it fires up.The V-four Hondas from the 1980s all fire up quickly, but don’t stay running at first. They all need three or four prompts of the starter before the stay running – stumbling and bumbling for a while with the choke full-on before smoothing out and finally starting to run normally.The 1981 Yamaha 750 Seca, which occasionally is difficult to start in the summer, surprises me by starting on the second try and staying running. Wielding a can of WD-40, I check and lube the stoplight switches, clutch and brake lever pivot points. This is followed with a check on brake and clutch fluid levels, air pressures, turn signals, brake lights, headlights, horns and so on.As the early afternoon light begins to fade, I clean up an old set of leather throw-over saddlebags for my Triumph that look surprisingly at home on it and I mount a set of deer whistles on the headlight stanchions. I finish up by rolling the bikes back to their dark corners of the garage and hooking up the battery tender.The afternoon in the garage relieves the shack-happy blue-plate blues a little — but it is no cure. Spring is the only real remedy.