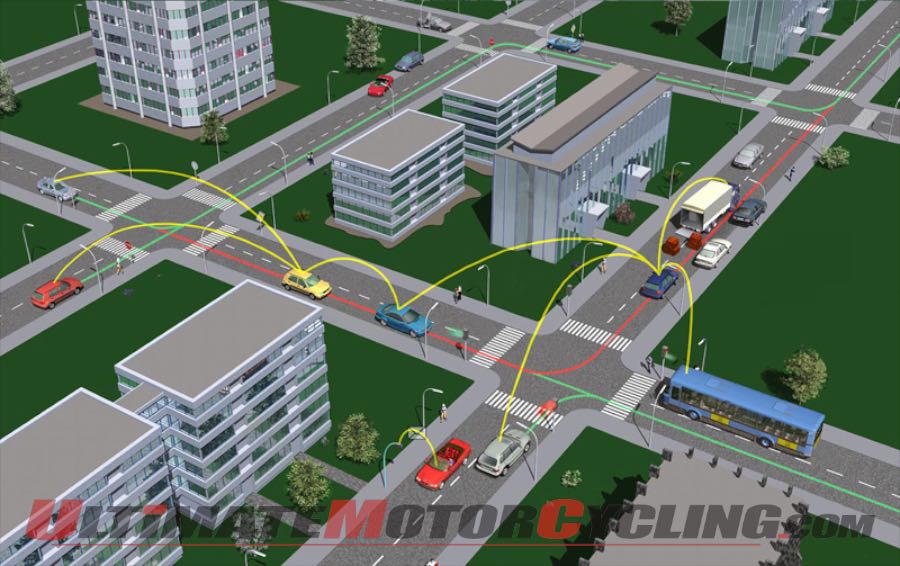 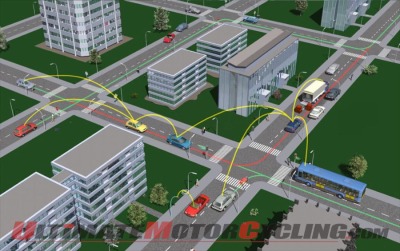 Is Vehicle-to-Vehicle Communications Tech in Motorcycling’s Future?The U.S. Department of Transportation’s (DOT) National Highway Traffic Safety Administration (NHTSA) announced last year that it was moving ahead with administrative steps to enable future use of vehicle-to-vehicle (V2V) communication technologies for “light” vehicles, such as cars, SUVs and pickup trucks.The technology would allow vehicles to “talk” to each other and ultimately avoid many crashes altogether by exchanging basic safety data – such as speed and position – 10 times per second. With such data flowing from nearby vehicles, others can identify risks and provide drivers with warnings to avoid common crash types (rear-end, lane change, and intersection).Will this technology make its way into the world of motorcycles? If the positive results continue, this may just happen. But more on the V2V technology currently under evaluation.DOT research has shown that V2V technology can address the majority of multi-vehicle crashes. These findings were based on evaluation with everyday drivers under both real-world and controlled test conditions.DOT launched the Safety Pilot “model deployment” in August 2012, in Ann Arbor, Mich., where nearly 3,000 vehicles were deployed in the largest-ever road test of V2V technology. The testing demonstrated interoperability of V2V technology among products from different vehicle manufacturers and suppliers,and has demonstrated that they work in real-world environments.Current V2V technology does not involve exchanging or recording personal information or tracking vehicle movements. The information sent between vehicles does not identify those vehicles, but merely contains basic safety data.The safety applications currently being developed provide warnings to drivers so that they can prevent imminent collisions, but do not automatically operate any vehicle systems, such as braking or steering. NHTSA is also considering future actions on active safety technologies that rely on on-board sensors. Those technologies are eventually expected to blend with the V2V technology.V2V communications can provide the driver with 360-degree situational awareness to address additional crash situations – including those, for example, in which a driver needs to decide if it is safe to pass on a two-lane road (potential head-on collision), make a left turn across the path of oncoming traffic (one of the major crash types involving motorcycles—and one of the most severe), or in which a vehicle approaching at an intersection appears to be on a collision course. In those situations, V2V communications can detect threats hundreds of yards from other vehicles that cannot be seen, often in situations in which on-board sensors alone cannot detect the threat.So, if all this high-technology is focused on automobiles, how does it figure to impact motorcyclists? If systems are similarly developed for inclusion in motorcycles of the future, or if, as is being considered by GM, auto systems that can detect cell phone signals in a similar manner, the result could be a huge reduction in car/motorcycle crashes.This is true because such a large percentage of car/motorcycle collisions occur when the driver of the car says they did not see the motorcycle at the time of the collision.According to the Hurt Report on motorcycle crashes: “In multiple vehicle accidents, the driver of the other vehicle violated the motorcycle right-of-way and caused the accident in two-thirds of those accidents.“The failure of motorists to detect and recognize motorcycles in traffic is the predominating cause of motorcycle accidents. The driver of the other vehicle involved in collision with the motorcycle did not see the motorcycle before the collision, or did not see the motorcycle until too late to avoid the collision.”Though the Hurt Report goes back to 1981, it is unlikely that the data on car/motorcycle collisions will have changed very much, if in fact, the statistics haven’t gotten even worse with texting and other distracted driving causes increasing over the years.The potential for V2V applications that could enhance the awareness of motorcyclists by drivers of automobiles by itself could lead to substantial reductions in accidents such as left-turn intersection collisions, rear-end collisions and lane-change crashes. That in turn holds the promise of much safer riding environments and fewer injury accidents of riders cause by auto driver inattention.Carried to the next level, if such systems could be made for riders, as well, the effect could be increased, though not as dramatically, since motorcyclists causing an accident by not seeing a car or light truck are far less common.Two-thousand fifteen could be an interesting year for the continued development of V2V systems, so stay clicked to Ultimate Motorcycling for more as we track this far-reaching story.