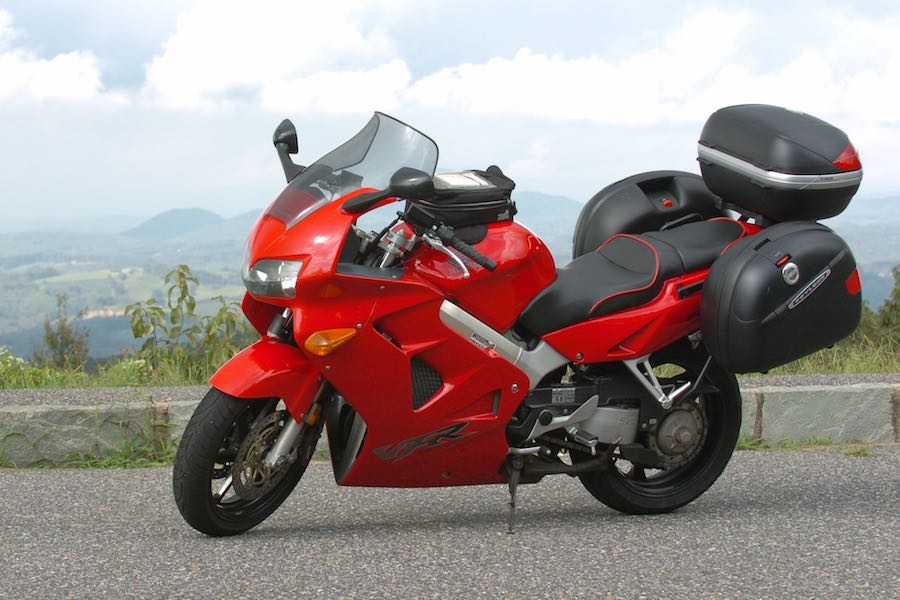 Upon purchasing a 1998 Honda VFR this past spring, I had one ultimate goal: build a budget sport tourer, one that will provide the comfort and power of a newer bike, but at a fraction of the cost.

Research was minimal; only a few companies offer aftermarket seats for the fifth generation (1998-2001) Honda VFR Interceptors. After browsing a few forums, Sargent quickly became the company of choice, and within in minutes I had ordered the World Sport Performance Seat directly from their site.

Within three days I heard the rumbling of the brown UPS truck, and my seat arrived to my Northeast Pa. doorstep from the Sargent warehouse in Jacksonville, Fla.

Once I pulled the seat from the thousands of annoying white packing peanuts, it screamed Italian styling. This was mostly due to the optional red welt that runs along the perimeter of the seat. On this generation VFR, the seats are available with black, red or yellow welts.

For the fifth-generation VFR, the Sargent seat is also a two-piece design. The main difference between the two- and one-piece design is that the passenger pillion has to be removed when installing the rear cowl cover, an accessory for the VFR that creates a very sporty look.

When the stock, one-piece seat is used, the cowl only covers the rear seat. But with the new Sargent setup, the rear seat is removed and allows for additional storage, although minimal, like a hat and maybe a half-full bottle of water crushed up a bit.

Installation of the Sargent seat was as simple as re-corking a bottle of wine. The Sargent seat’s pan is designed of durable PolyTec, and snuggly fit onto my VFR, though the rear pillion seat has to sort of pop into the bodywork before attaching.

Talk about comfort. The difference between the stock and the Sargent seat is extremely drastic, the aftermarket piece allowing way more saddle time. The massive amount of comfort is due to the Super Cell Atomic Foam contained within the Sargent, which allows your bottom to mold into comfort.

My longest ride with the stock seat was a 1900-mile roundtrip from Northeastern Pa. to Virginia International Raceway, and the butt movements began around 100 miles, or about 50 before refilling the gas tank.

Once the Sargent seat was in place, I went 160-miles without stopping on my very first trip, not even knowing I had traveled that far until the VFR’s gas gauge had a blinking bar, meaning it was time to fill up.

Besides the comfort from the high-tech foam, the attractive cover is constructed of marine-grade, UV-stabilized, mildew-resistant CarbonFX vinyl, which keeps you planted and not sliding around as much as the standard seat.

And when it rains, the rough-appearing texture of the CarbonFX vinyl becomes very significant; it puts a stop to the annoying slipping and sliding that occurs, especially when wearing a rain suit. Regarding wear, I’ve got well over 10K on the seat; the stitching has remained intact, and the vinyl shows no sign of fading.

As for passenger comfort, my biggest critic regarding almost everything in life gave the Sargent much praise over the stock setup. Now those trips that will supposedly be short, 30-mile jaunts through the Pocono Mountains but “accidentally” end up over 200 miles are much easier to executive…and the critic’s need for a break has increased by at least 30 miles.

The Sargent seat for the 1998-2001 Honda VFR retails for $409.95. Just think of each penny spent as a mile in comfort, and this adds up to be the single best investment for your bike regarding comfort.

About the VFR Budget Build

I purchased the 1998 Honda VFR for $2300, which was by far the best deal I’ve ever received on a motorcycle. The bike had 14K on it, and the seller had it listed for $3800 on Craigslist as a “beginner’s sportbike,” obviously not knowing what kind of sport-touring machine he had.

When I first laid eyes on it in his warm basement, I couldn’t believe the shape it was in. I knew this was the perfect platform for my budget sport-tourer build, one that I can mod to match the performance/comfort of a newer sport touring bike that costs quadruple the original asking price of my Viffer.

Plus, it was a fifth generation model, which has the mechanical cam gear that gave the V4 that muscular sound. And of course, I had to get it a bit cheaper, finally snagging it for $2,300.