With a V4 that is as smooth as a premium red velvet cupcake from Jamaica’s Cakes in Los Angeles, the venerable 2009 Honda ST1300 returns for a seventh year (eight, if you’re counting in Euros), and it proves that a classic recipe remains tasty over time.

As is so often the case, the 2009 ST1300 reflects Honda’s relentless (and typically successful) pursuit of perfection. Taking the motorcycle for repeated long rides, it’s difficult to find faults that don’t involve expecting the ST to be something it is not. In the case of the ST1300, it’s all about touring in exceptional comfort, with the ability to ride it like an upright sportbike when desired. 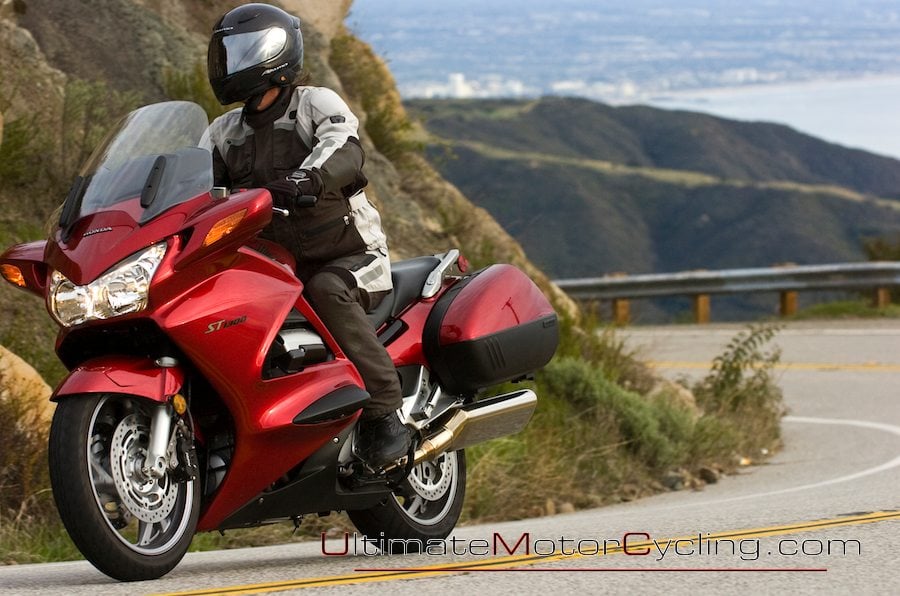 On the touring side, because the motorcycle has roots back to 1990, it is fairly barebones. You certainly won’t find the motorhome-like niceties that make the Gold Wing the luxurocruiser it is, but if your primary concern is ergonomics, the ST is flawless. If range concerns you, the tank holds a munificent 7.7 gallons. As it’s a sporting bike, you do not sit in a recumbent position. Instead, you have an almost perfectly neutral seating position that is both comfortable for the long haul and well suited to more aggressive riding.

The Honda ST1300’s suspension (non-adjustable, save rear preload) has the same sort of wide ranging success. It soaks up bumps and bruises in the road as if they weren’t there, yet it doesn’t wallow in turns (the aluminum frame adds to this) when ridden at a sensibly fast pace. I don’t want to oversell its sporting abilities-it’s not a Brutale-but for the typical rider who is also interested in long-distance capabilities, the Honda ST acquits itself nicely.

Ground clearance is good in turns, even those tight ones with dips that severely test lean angle. At higher speeds, touching down is a good reminder that you’re on a sport-touring motorcycle, not a superbike. Ride within reason (and that is a wide acceptable range, as I engaged in 100 mph sweepers), and the Honda ST1300 will reward you generously with abundant stability (and noticeably less agility).

Certainly, the ST1300 is not a motorcycle that wants to dive into corners with impunity; though its wheelbase is two inches shorter than the new VFR1200F, the ST is considerably heavier. It’s important to set the motorcycle up for turns and pick a line you like. It is not anxious to cut tighter into a turn than you planned, but you can do more than you think might be possible, if you are willing to add some muscle to the wide bars. Without a doubt, this is not a motorcycle that oversteers. 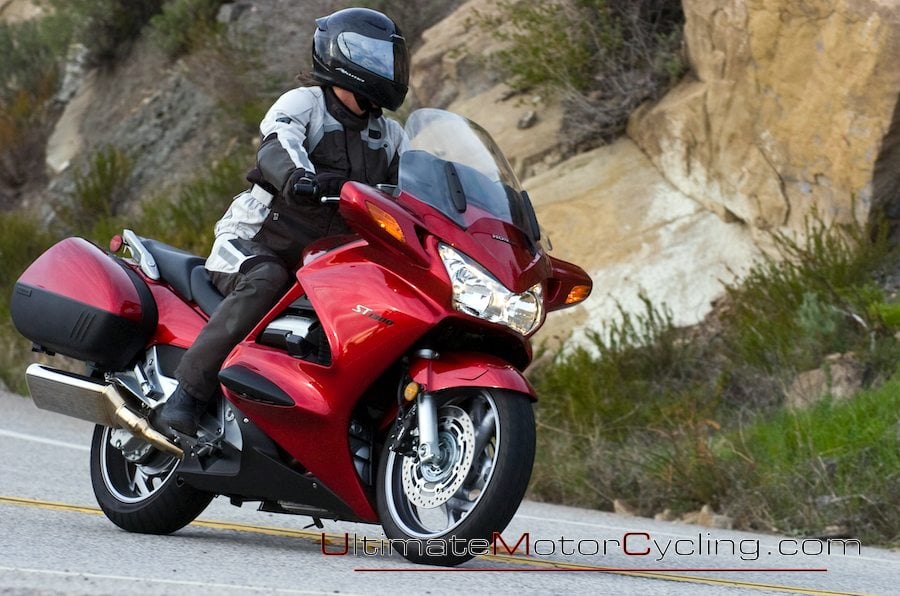 HondaInterestingly, the ST is excellent when it comes to side-to-side transitions. S-turns are a delight. And, while the ST may have a longitudinally mounted V4 (Moto Guzzi-style) and a shaft drive, there are not any strange handling quirks to go along with it. There’s neither jacking up during acceleration, nor squatting when stopping.

Power is abundant, and the V4 revs quite quickly. The redline comes earlier than you expect, especially because the motor is so smooth. You get an extra 500 rpm before the rev limiter gently kicks in at about 9000 rpm. A bit soft, though nicely controllable, off idle, the V4 gains speed nicely, causing much of the motorcycle’s heft to disappear. Gear selection isn’t critical, unless you are pushing the sport end of the ST’s equation.

Brakes are always an important commodity on a motorcycle pushing 730 pounds (plus rider, passenger and luggage). The twin 310mm discs up front (not radially mounted, but with six pads per caliper) are fine for the job, as is the single rear disc. The ABS version is a great safety feature if you ride in areas with unpredictable weather. In the dry, you could easily go through your entire ownership of the motorcycle without accessing the ABS service. However, it is a nice ace-in-the-hole to have to protect against unexpected emergency stops (Malibu housewives texting in their Porsche Cayenne Turbos), even though the Bridgestone tires are reluctant to relax their grip on the pavement.

Then there’s the Combine Braking System. Linking the front and rear brakes, and front and rear brake levers, it allows you to brake effectively using only the foot pedal. As an experienced rider, I cannot quite buy into that, but I don’t mind the rear brake being intelligently applied, even when I’m only actuating the front brake. Ultimately, it is transparent, and that’s all you can ask for.

The stock, removable hard bags are nice and roomy, and lockable. There are plenty of bags that won’t carry my LowePro Mini Trekker camera bag when it’s loaded up, but it snuggly fits into one of the ST’s bags. As the V4 is smooth as silk, I didn’t worry about vibration taking a toll on my Nikon D2H and 70-200/2.8 VR lens, and it did not. I certainly cannot say the same for many motorcycles on the road.

The ST1300 does have an electronically adjusted windshield that has a range of almost 7-and-a-half inches (plus over two manually adjustable inches), so riders of a wide variety of heights can fine-tune the shield to almost any conditions or desires. For sport riding, I run it low. On the freeway, I jack it up. Both positions are perfect in those situations. Additionally, Honda Genuine Accessories offers a fairing air-deflector set that allows further personalization.

Twenty years since the ST1100 first hit the road, the ST1300 remains a pleasing and relevant mount. It doesn’t have the luster of the latest-and-greatest, but as a back-to-basics sport-tourer that has all the amenities and capabilities that you need to get nowhere fast, the 2009 Honda ST1300 ABS does not disappoint.