Those who have followed the ADV segment of the industry will remember that Adventure bikes began their evolution with the 1980s BMW R 80 G/S, a large dirt bike that could travel long distances. Early entries were characterized by boxer (BMW) or V-twin engines (Cagiva, Honda, and others) for the low-end grunt that made them good in practically any situation.

At the onset, adventure motorcycles had to be real dirt bikes. Over the years they evolved to be more on-road than off-road, and now we have an ADV-S (Adventure-style) segment. Initially, the street-only adventure bikes were the subject of some derision because they lacked true go-anywhere ability and cred.

Front wheels were reduced from 21 inches (and then to 19 and 17), weight was packed on in the form of amenities, and even three-cylinder engines were offered — all leaning toward the street. To the surprise of no one who has ever ridden one, buyers began to accept them for their upright seating comfort, great handling, sport-touring ability, and overall great experience. It satisfied riders who didn’t need all the plastic on popular sport-touring machines, yet had no interest in the dirt. 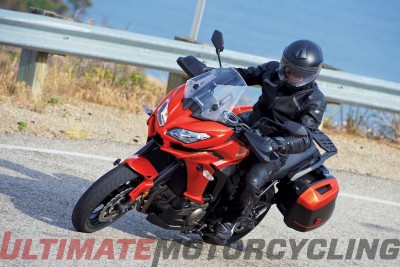 Kawasaki has finally brought the Versys 1000 LT over from Europe, offering buyers an upgrade path from the popular Versys 650 and something unique, too. The Versys 1000 is the first-available ADV-S bike incorporating an inline-4 motor, and that is good news. The inline-4 architecture and ADV-S marriage was destined to happen and is an important milestone for the segment.

The LT eschews dirt-ability in favor of street-ability, yet has kept the over-all configuration that is so popular. With their Ninja-sourced inline-4, 17-inch cast wheels, and close-ratio six-speed transmission, this is a sport-touring bike in ADV clothing.

The power, character, and versatility of the Versys’ 1043cc engine make it a joy

to ride. Torque is available right off idle, and one can ride it hard and fast or take it easy—the motor doesn’t care. Give a yank on the throttle and, once revs pass 6000 rpm, the intake sound is not unlike the secondaries kicking in on an old muscle car four-barrel carburetor, and the bike accelerates hard.

Close ratio gear changes happen fast, with silky smooth action from the shifter, as well as the cable-actuated slipper clutch, so triple-digit speeds can arrive in a blink or two. Overall gearing is low, perhaps a nod to the ADV crowd, yielding a ride that comes away from stops easily and is willing to ride all day long at 45-50 mph in top cog.

I found in the tight canyons that the LT actually likes being a gear higher than one might suppose. It is typical to ride through sharp turns at 20 mph in third gear, at engine speeds a bit below 2000 rpm, and then accelerating out with no lug or drama. This technique will also smooth out the busy nature of the sharp throttle response available if you keep the revs between 5000 rpm and redline at 10,000.

If haste is your pleasure, the LT will happily play along in the Full power mode. Even in mode Low (75-percent power), the LT will still stretch your arms. Regardless of the chosen fuel map, enough power is available that, when kept on the boil, the bike will deliver the excitement you desire.

I like the dual nature of this beast, in that all it takes to tame it is to click up a gear or two and let it cruise. The Versys is happy either way, and I will go on record as preferring the low-rev route to my destination—lots of thrust with little work. I was very pleased to experience how Kawasaki has made the torque curve so flat and robust to achieve this result.

The LT is equipped with a semi-adjust- able 43mm Kayaba inverted fork and pre-load-adjustable (via remote knob) rear shock. I found the standard setup to be responsive, with the caveat that when pushed hard in the tight stuff the front end feels a bit vague. Equipped with mileage- friendly Bridgestone Battlax Sport Touring T30 tires, the Versys certainly is not configured to be ridden like a Ninja.

The LT sports Tokico ABS brakes with dual 310mm, four-pot front calipers with a 250mm rotor out back, but the performance is not impressive — again, perhaps a concession to those who would deign to ride the Versys off-road. Back on the street where an ADV-S bike is happiest, fast stops will require a good, hard squeeze.

Traction control is standard and is advertised as three-position, but if you backtrack with the up menu switch you can find the off position, which also makes wheelies easier, if you’re so inclined.

Cabin dynamics are excellent; the 33-inch seat height is typical of the segment, and helps make for an excellent and comfortable upright position with plenty of legroom and reach. The seat is firm, and good for about 150 miles without a break (an accessory gel seat is available for hardcore tourers), while the 5.5-gallon tank will take you about 200 miles before you are looking nervously for a pump.

The windshield is manually adjustable without tools, and works well at protecting the rider from the blast, yet is small enough to not create any backpressure. The rubber-mounted, handguard-equipped handlebars have a nice taper and a dirt-bike like 35-inch width for easy turning.

With a rubber-mounted engine and tapered bars designed to absorb vibration, Kawasaki has made provisions for the elimination of buzziness and it works. Vibes throughout the bars, seat and pegs are minimal and not unpleasant—perfect for touring, as the LT is wont to do.

The dash display is semi-old school, with an analog tach and digital speedometer. The display area is LCD white with black markings, the labels of which are very small and hard to read in sunlight. There is a trip computer with all necessary values, such as fuel gauge and range, average speed and mileage, clock, air and engine temperatures, and more. Missing on the dash is a gear position indicator, but you can buy one that mounts in a ready-made slot in the fairing for $207. I must add that this sticks poorly in my craw—Kawasaki pulled the same trick with the Vulcan S. 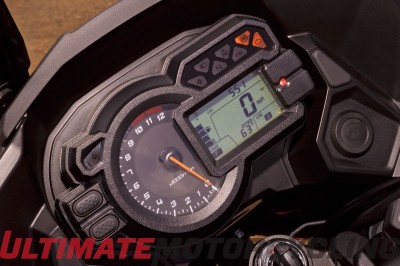 Touring and ADV fans will be happy to know the centerstand is standard, as are the 30-quart hard saddlebags, which are easy on-off-open and use the same key as the ignition. Our test bike had the top case carrier plate, which is a nice package shelf, and an optional 50-quart top case is offered.

Given the success of so many ADV-S machines, manufacturers are going in every direction practical to find buyers’ sweet spots. Now that the segment is unchained from powerplant design restrictions we are sure to see more inline-4 motors, including the BMW S 1000 XR.

With the goal of fast, reliable everyday riding and touring in a format that is not slathered in plastic, successful bikes like the 2015 Kawasaki Versys 1000 LT will be defined by the imaginations of designers and engineers and fueled by the wallets of buyers.