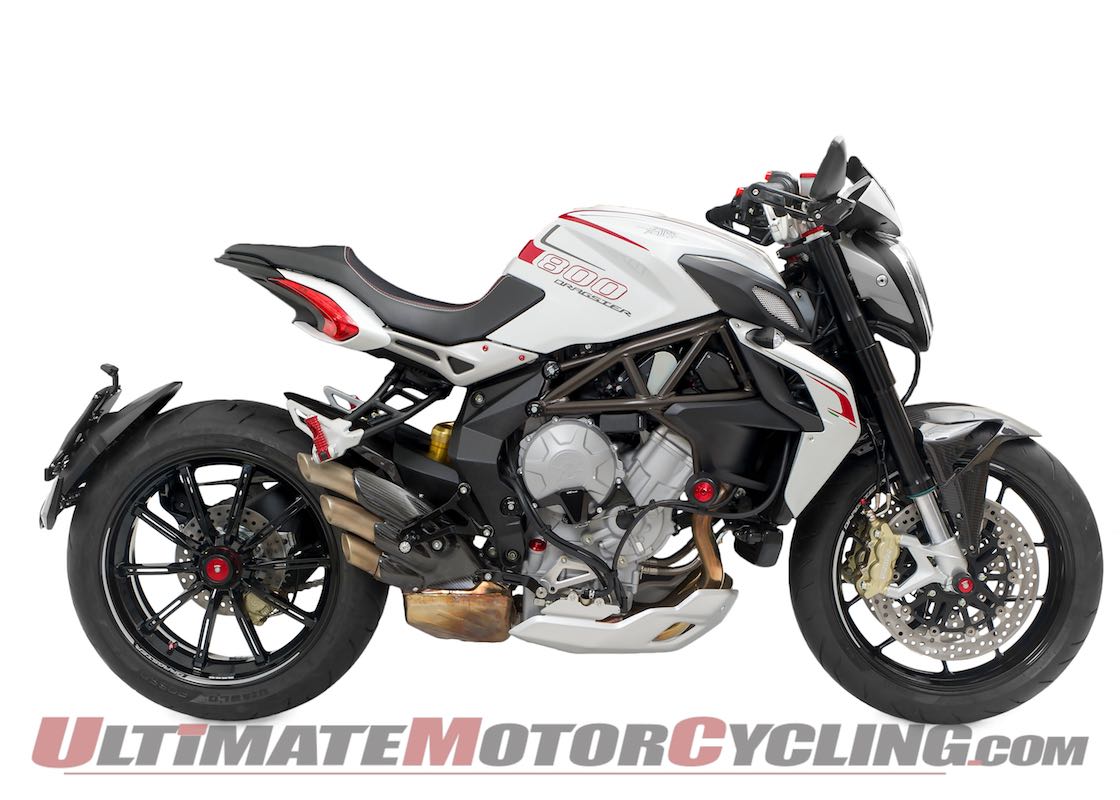 When MV Agusta unveiled its Brutale 800 Dragster in January 2014, its styling brought something new to the ever-evolving world of naked sportbikes.From its fat 200mm tire to its three-outlet exhaust that is signature across MV Agusta’s lineup of motorcycles built on the 800 platform, the Dragster quickly appealed.And it didn’t take long for CNC Racing’s R&D department to heighten this appeal with custom parts, from adjustable rearsets to engine guards.Speaking of the designs, CNC says “The CNC Racing R&D engineers analyzed this wonderful creature in detail, to customize it even further and make it even safer and easier to handle.”CNC Racing now offers many custom parts, as the CNC Racing MV Agusta above shows. In true CNC Racing tradition, many of these parts are machined totally from solid pieces, such as frame and engine guards, top and bottom steering plates, pinion cover, sprocket carrier flange, adjustable footrests lockable (or not) tank cap, the cover of the front brake pump, the brake and clutch oil tanks.CNC also offers frame sliders, and front- and rear-wheel protection. And these parts – highlighted in the below gallery – are offered in many different colors.The Brutale 800 Dragster offers the most muscular looks so far in the 800 lineup, along with the company’s latest electronics, including the MVICS (Motor&Vehicle Integrated Control) that features three riding modes plus a customizable map, and eight levels of traction control, and the Bosch 9 Plus ABS system..The 798cc triple has impressed us over and over during launches of the other 800 models, and the Dragster should be no different. MV claims the Dragster’s powerplant makes the same horsepower as the Rivale 800 – 125 – but peaks 400 rpm earlier at 11,600 rpm. The engine also produces the same torque as the Rivale 800 – 60 ft.-lb. at 8600 rpm. MV Agusta also released the Draster RR, which features spoked wheels and a revised 798cc engine that produces 140 horsepower and 63.4 ft/lbs of torque.And now, the CNC Racing parts further help the Draster live up to its tagline – “Adrenaline Addicts Only.”For additional information, check out CNC Racing.CNC Racing MV Agusta Dragster Gallery: