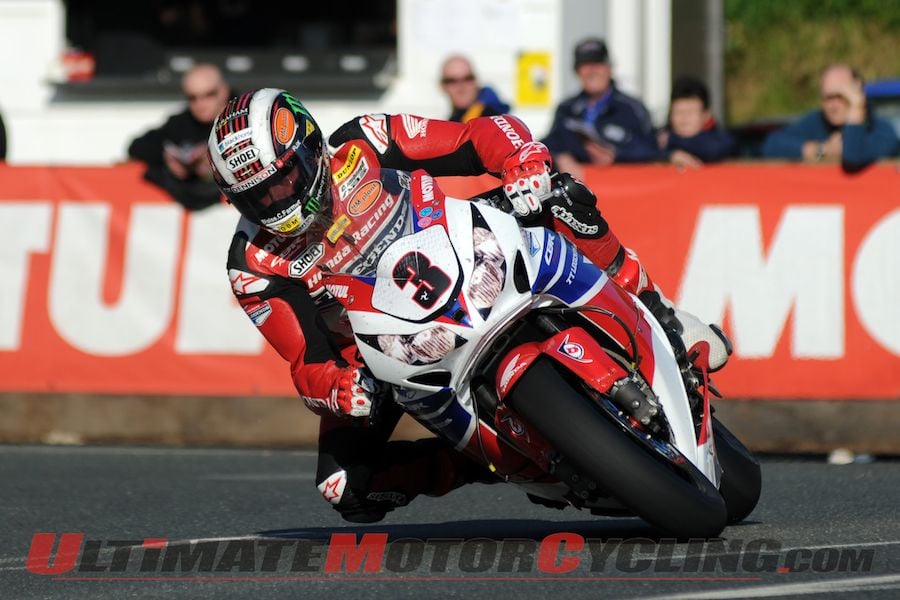 2013 Isle of Man TT Thursday Qualifying ResultsAt the fourth time of asking, practice for the 2013 Isle of Man TT races, fueled by Monster Energy, went ahead exactly as scheduled and with conditions around the Mountain Course ideal, a sigh of relief could be heard all across the Island.With dry roads, good visibility and sunny intervals, the Superbikes were finally let loose in anger and it was little surprise to see all the fancied runners go out on those machines first with James Hillier and Gary Johnson the first riders to blast off down Glenctruchery Road.They were soon followed by Cameron Donald, Michael Rutter, Guy Martin, Bruce Anstey, Michael Dunlop and Dan Kneen while John McGuinness was in his customary position further back, setting off in the sixth pairing. News soon came through though that both Dunlop and Kneen had stopped with mechanical problems at Glen Darragh Road and the Highlander respectively.First to complete the lap was Johnson at 125.73 with Rutter going slightly quicker at 125.76 although they were both upstaged significantly by Martin who lapped at a shade under 128mph.McGuinness’ opening lap was a more leisurely 120.25 as he stopped briefly at Ballacraine. Meanwhile, Dunlop had managed to get back to the pits and rejoined the action on his 600cc machine, lapping at 122.67.A few riders including Johnson, Hillier, Donald and Dan Cooper stopped to make adjustments but many carried straight through with Anstey briefly going to the top of the leaderboard with a lap of 128.05. McGuinness soon bettered that with a speed of 129.07 but other riders were encountering problems, Dan Stewart stopping at Ramsey Hairpin and Conor Cummins at Governor’s Bridge.Anstey and McGuinness both pitted but on their fourth lap they both broke the 129mph barrier with the Kiwi on 129.14 and the Morecambe Missile on 129.32. Rutter and Martin again lapped in excess of 127mph with Dunlop joining them whilst newcomers Josh Brookes and Branko Srdanov were flying, both breaking the 120mph mark. The Aussie posted no less than three 120mph+ laps, the best at 121.99, with the Dutchman lapping at 120.11.William Dunlop, Jim Hodson and Lee Johnston were also retirments but the Norton machines were lapping well, Ian Mackman the quickest at 119.55. As the full solo session drew to a close, riders just contesting the Lightweight race were given a two-minute window to get out on track and all duly obliged, TT rider liaison officer John Barton with 109.99 going marginally quicker than Chris Palmer (109.89mph).At 8 p.m., the Formula Two sidecars got another session and with conditions remaining ideal, it was a packed field that lined up. Dave Molyneux/Patrick Farrance, Ben and Tom Birchall, Gary Bryan/Jamie Winn, Conrad Harrison/Mike Aylott and Dougie Wright/Martin Hull were the first crews to blast off although Tim Reeves/Dan Sayle had to make a few last-minute adjustments before heading off towards Bray Hill.Molyneux/Farrance were first back with a lap of 112.62 with the Birchalls, Holden and Reeves all over 111mph but Roy Hanks/Kevin Perry and Karl Bennett/Lee Cain were early retirements.On their second lap Molyneux/Farrance increased their pace to 113.56 but Reeves/Sayle weren’t too far behind on 113.15 with the Birchalls and Harrison/Aylott practically inseperable on 112.19 and 112.18.The session was brought to a premature end with a red flag situation following an incident at Grahams with sidecar duo David Saunders/Anne Garnish. The pair were reported to be talking to medics at the scene but were taken to Nobles Hospital for further assessment.