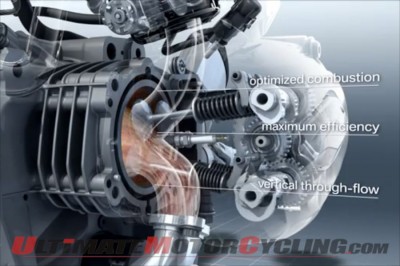 2013 BMW R 1200 GS Engine VideoSierra BMW out of Nevada has uploaded the attached video, displaying an internal view of the 2013 BMW R1200GS’ semi-water cooled engine.BMW Motorrad revamped the R1200GS’ engine for 2013, offering an air/water-cooled boxer engine with vertical through-flow heads.The twin, which produces 125 horsepower at 7700 rpm (compared to 110 horsepower of the last year’s model), continues to use air/liquid cooling, however, the coolant oil has been replaced by a glycol-water mixture. This ensures a high level of heat absorption capacity of the cooling liquid for more efficient heat dissipation.Speaking of the design, BMW reports: “So-called precision cooling (a principle similar to that used in Formula 1) involves only those engine elements being cooled with coolant, which are particularly exposed to thermal stress. The engine still continues to use air cooling, thereby preserving the characteristic appearance of the opposed twin boxer engine. The two radiators are small and inconspicuously integrated.The through-flow is now vertical instead of horizontal for improved filling, and the engine housing integrates the 6-speed gearbox as well as a wet clutch with anti-hopping function instead of the dry clutch as was used previously.”For a three-part video series on the development of the 2013 BMW R1200GS, click here.