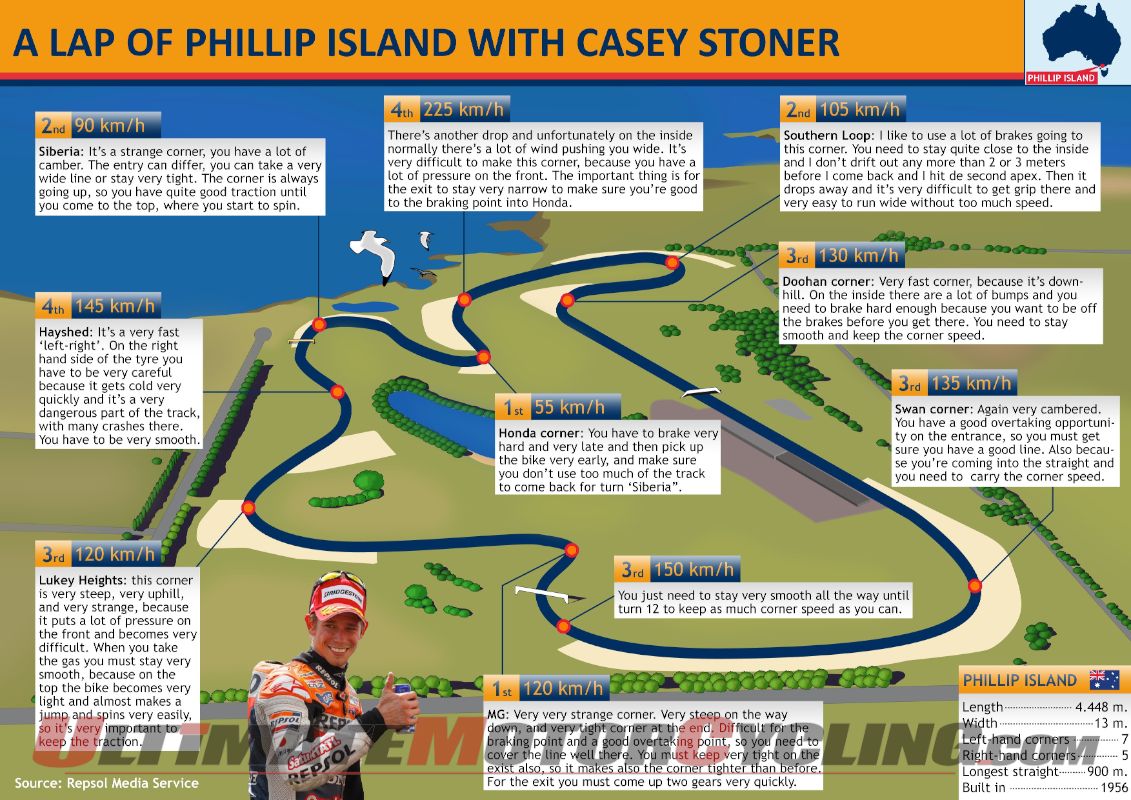 2011 MotoGP Graph
Want to take an analyzed lap around Phillip Island with current MotoGP points leader Casey Stoner? In the attached graph above, Stoner takes you through his home 2.764-mile circuit with 12 turns, explaining all sections of the track. Just click on the graph above, and then expand the image by clicking the white "X" in the lower right corner.Here’s what Repsol Honda says about the circuit: "Surrounded by a magnificent landscape and with a view to the sea, the Australian track is one of the fastest and flowing circuits of the calendar. Of the 12 corners -7 left-hand and 5 right-hand- that form the circuit, only two are taken under 100km/h. "The current MotoGP leader of the championship highlights the maximum concentration that has to be kept at all times, due to the high speeds at which most of the corners are taken. For the Repsol Honda Team rider, there are two corners that can be key for the race. The ‘MG’ corner and the last one before entering the Finish straight will be the points where the riders will overtake each other and will be crucial for the outcome of the race."Stoner knows Phillip Island well, the track that will host this weekend’s Australian Grand Prix. The Repsol Honda rider has won there the last four consecutive years, each won on the Ducati.On Sunday, which is Stoner’s 26th birthday, he could possible clinch the 2011 MotoGP Championship. This is due to a 40-point lead over his rival, the reigning MotoGP Champion Jorge Lorenzo (Yamaha Factory Racing).The easiest way for Stoner to clinch the MotoGP championship is to make it five consecutive wins at Phillip Island; if Stoner completes this feat, and Lorenzo doesn’t finish on the podium, Stoner will claim his second world title, his first arriving in 2007 while with Ducati. If he doesn’t win, Stoner must finish 10 points ahead of Lorenzo to claim the championship three rounds early. And with 13 consectuive podiums, Stoner only needs to remain patient during his home round.