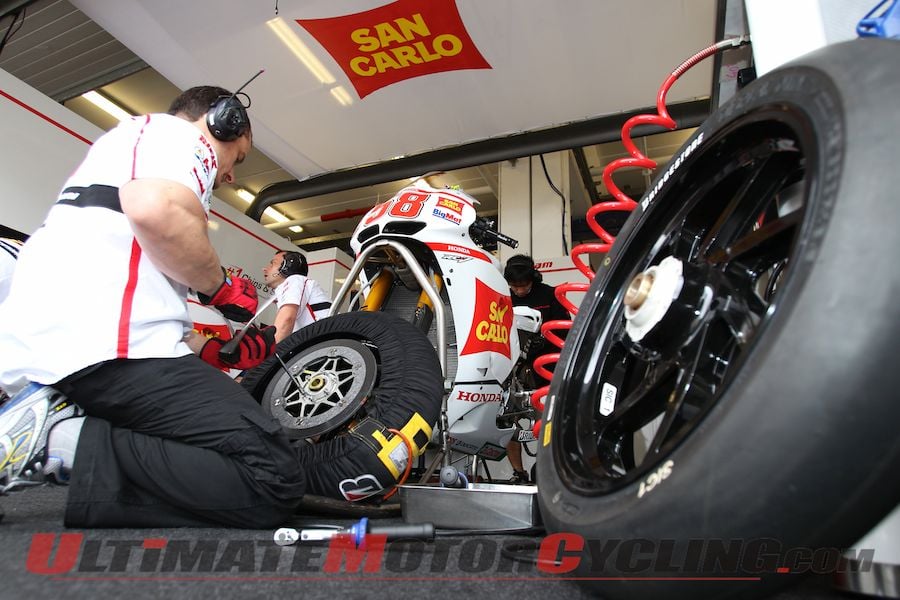 2011 MotoGPIn 2010, the Motorland Aragon circuit in the north-east of Spain was an entirely new challenge for Bridgestone as it held its first premier class motorcycle Grand Prix. This year however, Bridgestone, the MotoGP teams and the riders all have the benefit of last year’s data to call upon.The MotoGP circuit’s surface is relatively smooth slippery so softer rear tire compound options have been selected: the soft and medium rear symmetric slicks. Front slick options are more unusual however as the available compounds are medium and extra hard, the same as were offered in Qatar MotoGP.This is because the location of the MotoGP circuit can mean that sand can be blown onto the tarmac overnight leading to a higher rate of abrasion particularly of the front tire as it tends to push more into corners on the slippery sand, just like in Qatar, and the extra hard compound has far greater wear and graining resistance.There are also a number of fast downhill braking zones which demand good front-end stability, and some MotoGP riders may favor the extra hard compound for the benefit it offers in this area. Additionally this year as per the new regulations, a third option of soft compound front slicks will be provided for cold conditions.Motorland Aragon has a balanced nature in terms of the demands placed on the right and the left shoulders of the tires, so for this reason asymmetric rear slicks have not been selected, making the MotoGP one of only four this season where the popular asymmetric rears won’t be used.Looking closely at last year’s data and rider comments, it has not been necessary to revise tire compound options for the Aragon MotoGP this year. Based on the circuit analysis and scientific approach to tire selection last year at Motorland MotoGP, Bridgestone are confident that the choices made then are still the best suited to the circuit now. The only difference is the addition of the third soft compound front slick tire for the cooler conditions, and this could feature more heavily in the morning sessions this weekend than it has done in the past three MotoGP races.Current MtoOGP championship leader Casey Stoner (Repsol Honda) won the inaugural Aragon GP for Ducati ahead of Dani Pedrosa (Repsol Honda) and Nicky Hayden (Ducati Team), while Jorge Lorenzo (Yamaha Factory Yamaha) was fourth. After Lorenzo’s victory in Misano last time out closed the gap in the overall standings, the championship race will intensify as MotoGP embarks upon the last five rounds of the season.Hiroshi Yamada (Manager, Bridgestone Motorsport Department) says: “Of course last year Aragon was a totally new circuit to MotoGP but I was very impressed with it and certainly there was a lot of good feedback from everybody in the paddock.“I am pleased that we are going back this year as it is an exciting and quite dramatic circuit, and with the benefit of last year’s experience not only is our job easier as we do not need to conduct more scientific analysis of the circuit and its tarmac, but we can also be very confident of our tyre compound choices. As the championship fight gathers pace entering the last period of the season, I hope that we will see more good battles not just for the entertainment of the fans but us inside the paddock too!”Hirohide Hamashima (Assistant to Director, Motorsport Tire Development Division) says: “Run for the first time in 2010, we now have the benefit of last year’s data to draw upon for this season which has allowed us to verify that last year’s compound choices were well suited and don’t need revising.“The Aragon track surface is relatively smooth and slippery, similar to Misano, so we need good grip which suggests softer compounds, but there are also some long corners and some downhill braking points which require greater stability and thus harder compounds. Last year, although we chose tire compounds based on exhaustive and accurate scientific study of the circuit, including taking latex moulds to take back to Japan for closer inspection, it was still a totally new challenge for us but I am pleased that we can look back and say that we did a good job.“The location of the circuit is at quite a high elevation meaning the weather conditions are cooler so warm-up performance is important. This is the first race since the change in regulations at the Czech Republic GP in which we might see more riders using the third soft spec front tyre particularly in the morning sessions.”Bridgestone MotoGP slick compounds available: Front: Soft, Medium, Ex Hard. Rear: Soft, Medium