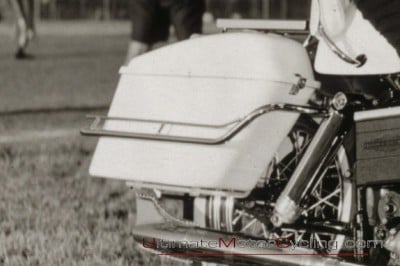 Dressed For SuccessThe year 1965 was pivotal for Harley-Davidson. The venerable Panhead engine delivered its swan song, making way for the Shovelhead era. The company went public on the stock market. Most importantly, The Motor Company christened the industry’s first full-dress touring horse, the Electra Glide.The pioneer of long-range freedom machines debuted with the last of the 74-inch Panheads, though it was the first FL Harley to feature an electric starter. However, a vestigial kicker remained.The granddaddy of dressers didn’t exactly roll off the floor equipped for long-range duty. Essentially a Duo-Glide with an “Electric Leg” and a five-gallon Turnpike tank, the Electra Glide’s touring accessories were strictly add-ons.

Once the windshield was attached and saddlebags bolted on, the big, slow-revving twin brought distant horizons within reach. Sure, handling was dubious and the front brake had all the squeeze of a Paul Lynde handshake, but the Electra Glide was a bike for getting into fourth gear, ticking off county lines and looking damn good in the process. (Color photo courtesy of the Motorcycle Hall of Fame Museum)