When Ducati first unveiled the Multistrada in 2004, it was met with a kind of enthused skepticism. Many people did not know what to make of the tall, quirky, unconventional-looking motorcycle. Stylistically, it lacked the racing pedigree and sleek lines that imbued the other machines rolling out of the Bologna-based factory that dutifully take design cues from myriad road racing successes.Conversely, the Multistrada displayed the aggressive attitude of an off-road machine coupled with the street-smart aspects of the broadening upright/naked sector. The design boldly strayed from Ducati’s safe ground and proved the Italian company could move to a different beat of its own drum. 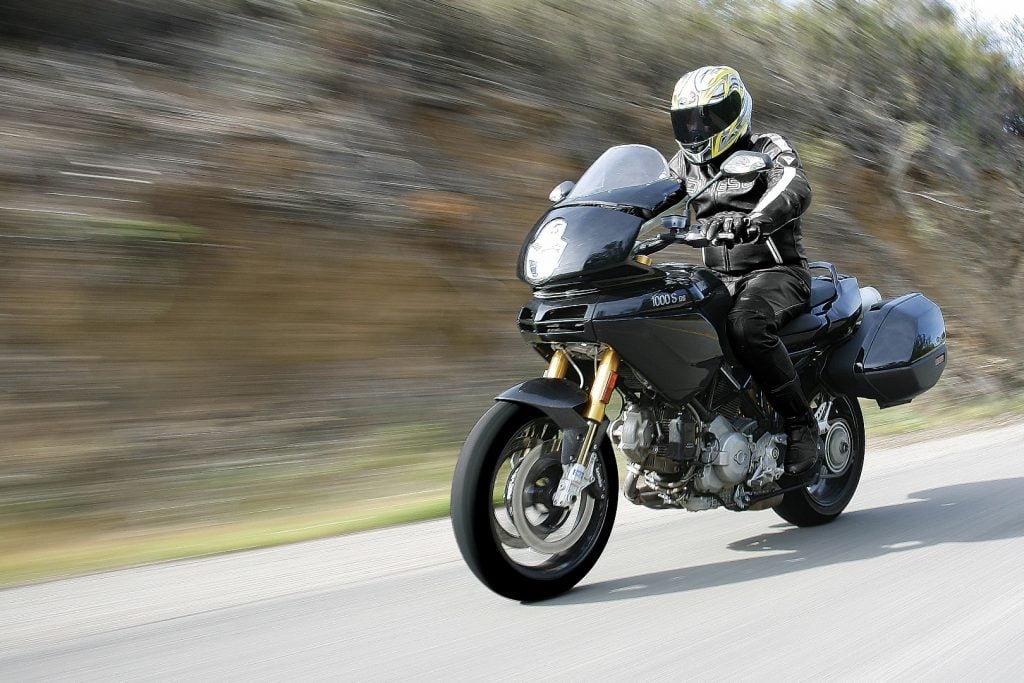 Aesthetically speaking—as with most departures from tradition—the Multistrada was met with mixed reviews, garnering its share of unflattering references. However, once this alloy of purpose and performance was let loose on the roads of the world, the Multistrada quickly proved to be the proverbial card up Ducati’s sleeve. Shedding the initial ugly duckling and odd-man-out impressions, it emerged as a universal hit in the realm of two wheels, and with good reason—the machine worked.For 2006, Ducati has stepped up the already impressive all-around performance of the standard Multistrada with the introduction of the 1000s DS model. Distinguished from the 1000 DS by the addition of top-of-the-line Öhlins suspension components, the Multistrada 1000s takes that final step into ultra-performance. The Gold anodized inverted Öhlins fork and a fully adjustable Öhlins shock are the crowning touches to this bike’s improvements.The Öhlins components are more than merely attractive add-ons. They contribute significantly to the new Multistrada’s road-going behavior, complementing the already stable manners of the machine by adding an additional degree of feel and response.The shock is activated through a progressive linkage connecting it to a single-sided swingarm and has an easily accessible spring-preload adjustment control knob for dialing in the ride height to suit the situation and rider demands.Ducati’s signature trellis frame cradles an air-cooled, desmodromic, dual-spark, L-twin powerplant. The 992cc two-valve per cylinder engine pumps out a healthy 92 horsepower at an agreeable 8000 rpm. Plenty of torque makes stop-and-go traffic situations—normally a low-speed balancing act between throttle and clutch—an effortless affair.The desmo engine is married to a six-speed transmission through the traditional Ducati dry clutch. Gearing is somewhat tall, resulting in fifth and sixth gears being reserved for long stretches of highway, allowing relatively high speeds at low revs for enhanced fuel economy and longer engine life. But, really, who’s chasing good fuel economy when riding a motorcycle as fun as this one?The Multistrada’s upright seating position not only renders comfort, but also a high line-of-sight, good for traversing mountain passes or maneuvering through rush-hour traffic. However, don’t be fooled by the tall stature or the SUV-like styling—in the right hands, the Multistrada is more than capable of shaming many high performance sportbikes on canyon roads. Its agility—courtesy of a claimed weight of just 432 pounds and wide handlebar—allows for a large measure of leverage and control, which translates to a ride of comfort and ease. 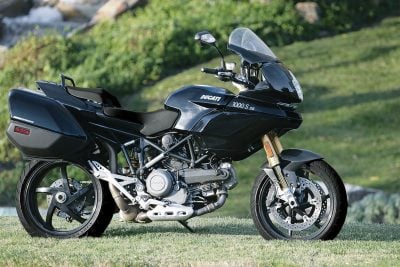 In addition to a speedometer, tachometer, clock, and trip meters, the Multistrada has an array of useful readouts such as remaining fuel, estimated miles per gallon, and estimated remaining distance to empty. A fuel capacity of 5.3 gallons gives the Multistrada a decent range and helps to assuage the intrepid traveler’s angst when traversing regions sparse in petrol stations.This leads me to my only bona fide complaint about the Multistrada—the inaccuracy of its fuel gauge. The design of the gas tank—vigorously contoured to intertwine with the frame—results in a fuel-level sensor that sends contradictory information to the dash.Once below the halfway mark, the gauge turns skittish, bouncing back and forth between empty and half, giving erroneous low-fuel warnings. The trick is to reset your trip meter at each top-off and to know that at around 100 miles you should start looking for fuel. (Note: Ducati engineers told me that when the low-fuel warning light comes on, you have nearly two gallons of gas remaining in the tank).The only other minor annoyance I found with the 1000s has to do with its raised handlebar clamp, which inadvertently makes getting at the ignition key with gloves on a bit of a juggle.Traditionally, Italian engineers are not known for their practicality, choosing instead to indulge their flamboyance, their impulsiveness, and their passions. Yet with the Multistrada, the designers and engineers at Ducati have culled together one of the most practical and sensible motorcycles to date. They achieved this without compromising Ducati’s legendary handling and performance standards, creating a machine with its own distinct flair. Any reticence people may have about the design cues of the Multistrada predictably vanishes once some seat time has been accumulated. Accented with carbon fiber, our 1000s model struck a mean pose in basic black.Whether you are traversing winding canyon roads, dealing with busy city centers, or tackling long-distance travel, as the name Multistrada (“many roads”) implies: If it’s covered with asphalt, the 2006 Ducati Multistrada 1000s DS can handle it.Photography by Cordero StudiosRIDING STYLE
Helmet: AGV
Jacket, gloves, pants + boots: Dainese