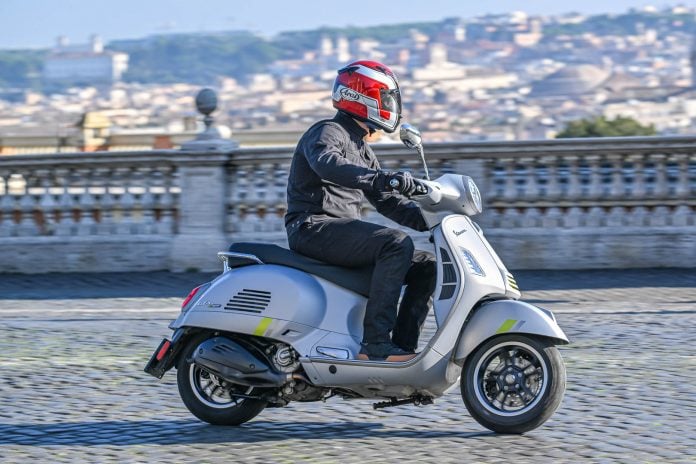 There are a few things that Italy figured out long ago: red sauce on pasta, the Pope in silly hats, and Vespas in Rome. Should you have the good fortune of waking up in the boot-shaped nation’s historic capital city, you’ll undoubtedly want to see its breathtaking landmarks in short order. One could lace up their sneakers and hoof it, but that’s pedestrian. Hailing a cab and holding on for dear life isn’t a poor choice, though universally taxing. Of course, it’s tough to be beat scooting to the sights on the 2023 Vespa GTS 300. 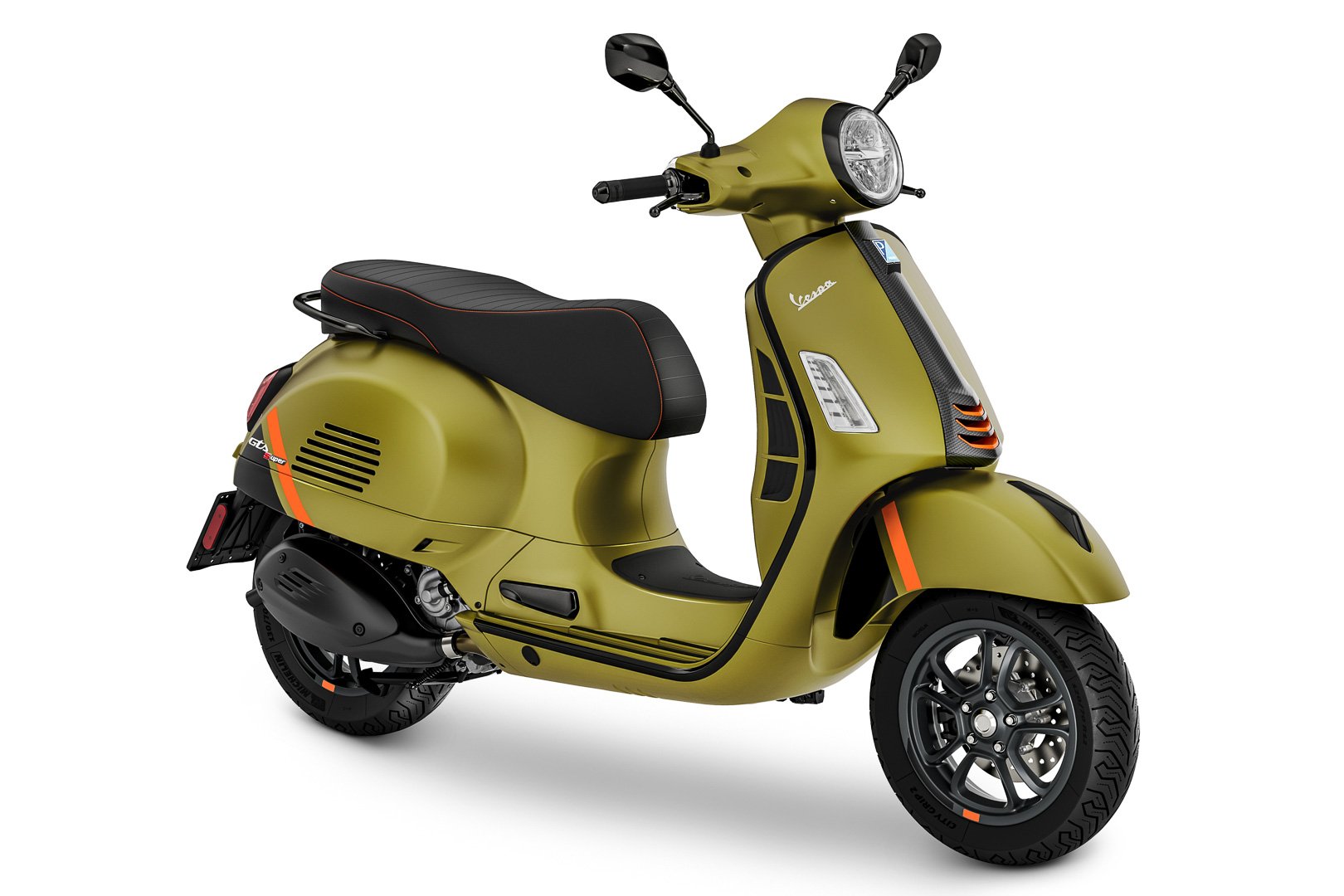 A stone’s throw away from St. Peter’s Basilica in the quiet residential neighborhood of Aurelio, we met up with the four trim levels hoisted on their centerstands—the GTS 300 ($7799), GTS 300 Super ($7999), GTS 300 SuperSport ($8099), and GTS 300 SuperTech ($8499). They’re all nearly identical, differentiated only by visual tweaks. The SuperTech does ascend to the top of the range with its full-color TFT display, plus a carpeted storage compartment with an interior LED light.The sole member of the Granturismo Sport family set to grace American shores, the 2023 GTS 300 is the largest wasp in Vespa’s nest and flexing quite a few updates. The elegant step-through unibody design borders on national pride for passionate Pontedera staffers, who chiseled slightly sharper edges into its iconic curves. A new tie, mudguard, mirrors, crest, redesigned five-spoke wheels, and all-around LED lighting top the aesthetic lists without straying from well-guarded traditions.Tech and refinement are on the agenda this year, starting with a new analog/LCD dash and the full-color TFT display exclusive to the GTS 300 SuperTech trim. The TFT display unlocks the true potential of the Vespa MIA app, including navigation, though purists might feel the traditional speedo is a better fit. Keyless ignition also opens the glovebox and under-seat storage. Also, there’s a bike-finder feature—handy when it seems every other scooter in Italy is a Vespa. 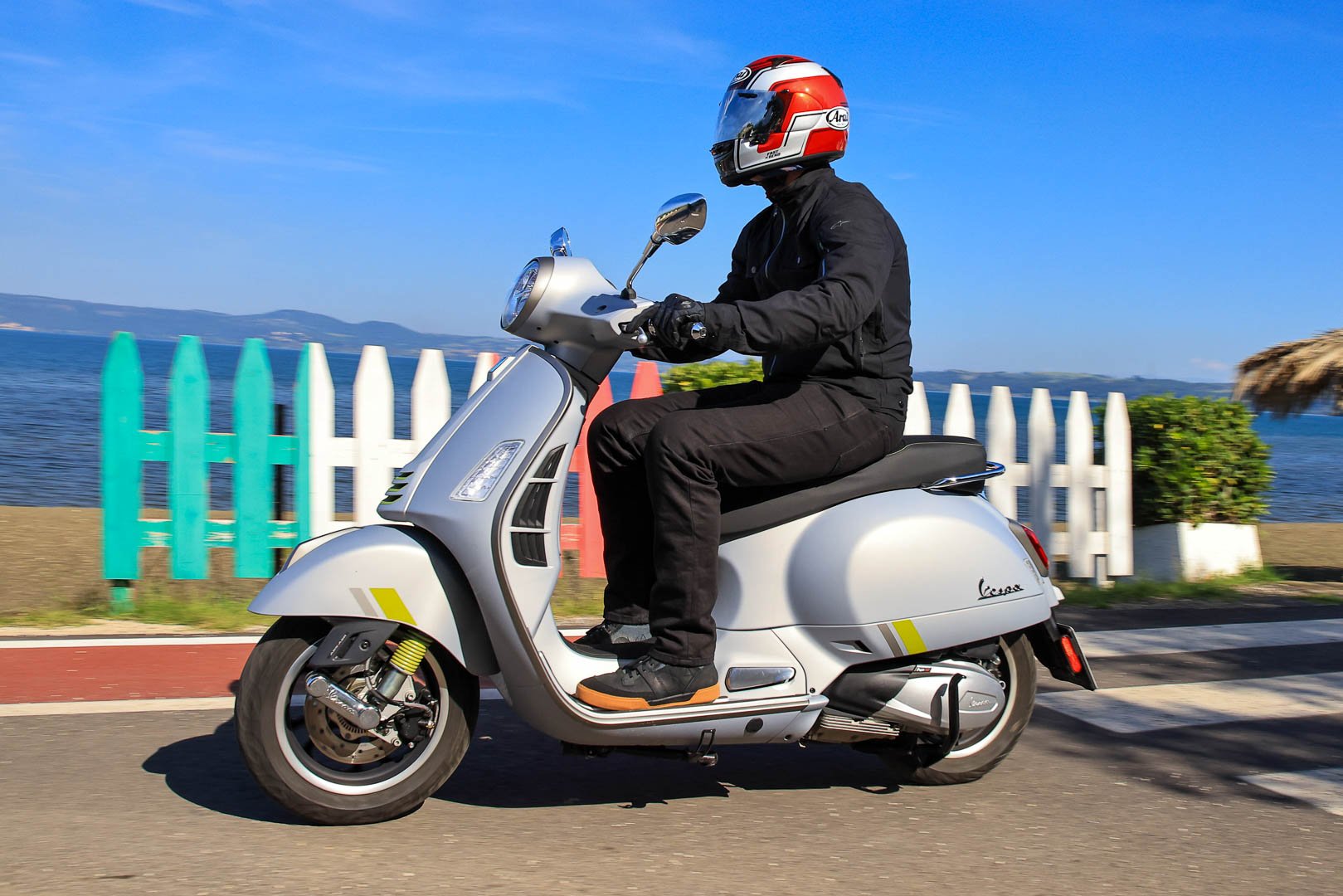 Saddling up on the narrowed seat is where things are seen and felt. A wider handlebar recalls Vespas of old with chromed plastic switchgear covers, though metal would please the senses and be up to snuff with the whole ensemble. Once cobbled together from a post-war aviation parts bin, the brand’s quintessential trailing-link front suspension now features a stability-enhancing pull rod.Those facts swirled in my jet-lagged mind while blasting past quaint corner cafés during a brisk Roman morning. It becomes clear through the blur that it takes all of two blocks to gel with the 2023 Vespa GTS 300 and underscores why nearly every Italian man, woman, or child is no stranger to the scooter.Around a few bends and down one of the many ancient routes, we put the revised suspension through its paces on the well-worn cobblestone streets in front of the Fontana dell’Acqua Paola, commissioned by Pope Paul V in 1612 to mark the terminus of the restored Acqua Paola aqueduct. It brought much-needed fresh water to Janiculum Hill, whose residents once relied on the sullied Tiber River for their daily needs. 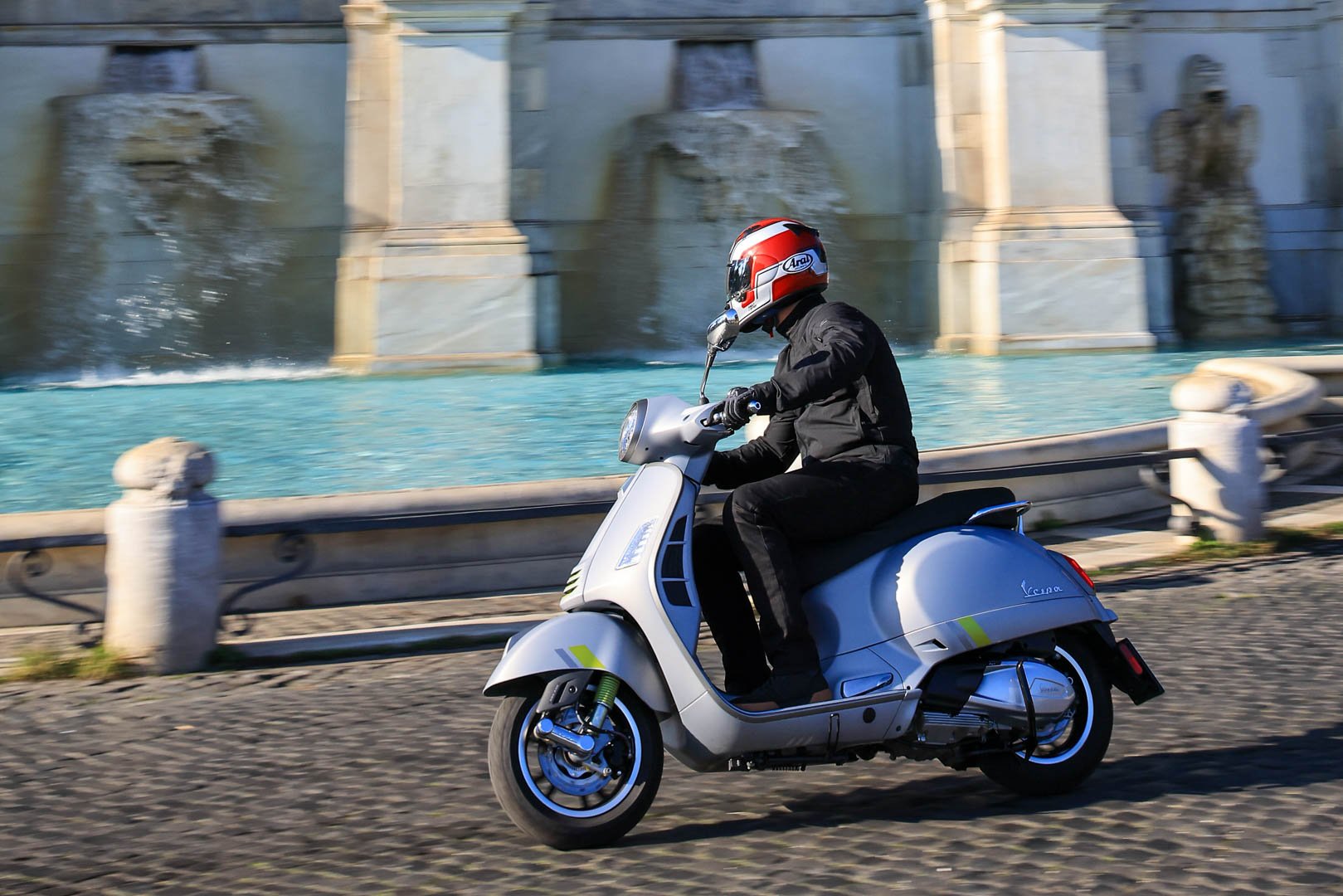 The Vespa’s front end tracked along the century-old pavers with greater precision than any wasp I’ve scampered around on prior. It gobbles up hits with the same enthusiasm I have for diavola pizza as the breathed-on dual hydraulic shocks work admirably. Meanwhile, tourists took in what I’d argue is one of the best views in Rome.Vespa’s origins as a practical people mover ring truer than ever and are highlighted when crossing into the city center. An ultra-low center of gravity leaves nothing to be desired in the maneuverability department when wrestling congested traffic near Vatican City.If motorsport is a religion in Italy, then lane splitting is one of its many gospels, as scooters take to the streets as if armed with a prophet’s protection. From the GTS 300’s comfortable perch and utilizing its ample steering sweep, we fell in with locals who demonstrated that Saint Ayrton Senna’s words, “If you no longer go for a gap that exists, you’re no longer a racing driver,” are heeded daily while weaving past the Coliseum. 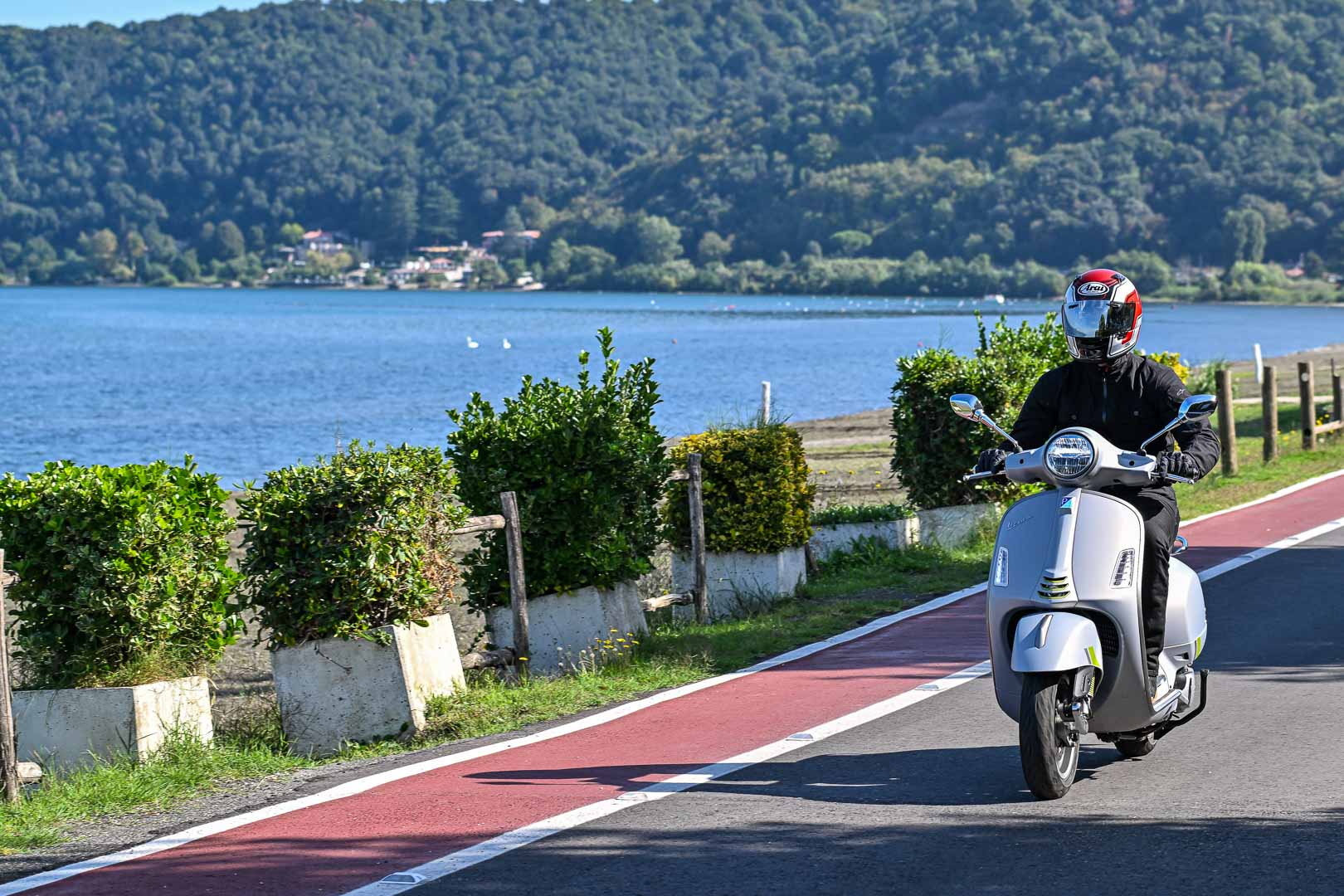 Returning to the fold are standard safety features of ABS and traction control, marketed as ASR by the Italian firm. Since a good portion of its 347 pounds is distributed over the back end, the rear brake helps you drop anchor to avoid obstacles such as inattentive tourists. Grabbing a handful of the binders isn’t met with sharp intrusion or bite, with single-piston Nissin and ByBre calipers doing their work when you give the levers a yank.With no shifting to occupy your faculties, the fully automatic CVT allows you the freedom to live your life as the Romani. A hand is free to hold a cigarette or gesticulate wildly at the first sign of a minor traffic slight, while a phone is lodged between your face and the cheek pads of your locked-open modular or open-face helmet. It happens so often that you’d assume it’s on the licensing tests.Powering the GTS 300 is a 278cc single-cylinder four-stroke mill with plenty of city-going gumption, a claimed 24 horsepower to 19 ft-lbs of torque, which nets roughly 75 mph on the speedometer when dicing it up with colleagues. Whacking it wide open from a standstill is enough to feel a smidge of CVT belt slippage, but nothing I’d write home about. Of course, a Vespa can quickly flap its wings in the tightknit urban environment, but the Vespone (which means “big one”) has enough puff to maintain a handy pace in the countryside and sip only what appears to be thimblefuls of its 2.2-gallon fuel tank.

Winding through curvy backroads that would keep any knee-dragging sportbike rider occupied for a Sunday afternoon, we aimed our handlebars towards the picturesque Lake Bracciano. A wonderful volcanic lake on the Roman outskirts, it is spotted with quaint villages and eateries to get your fill between summer dips in the water.This is where the grand touring aspect of the GTS goes beyond mere labeling, as its freeway-capable speeds and ample storage come into focus. Drop your provisions under the seat or deck out your scoot with additional racks and cases to vindicate those claims. The only cargo gripes I can speak to are these: It can get a little toasty in the underseat storage due to engine proximity. Don’t store dairy in there, or do because you live on the edge. Also, at this price point, all models should have the LED lighting and carpeting of the SuperTech. 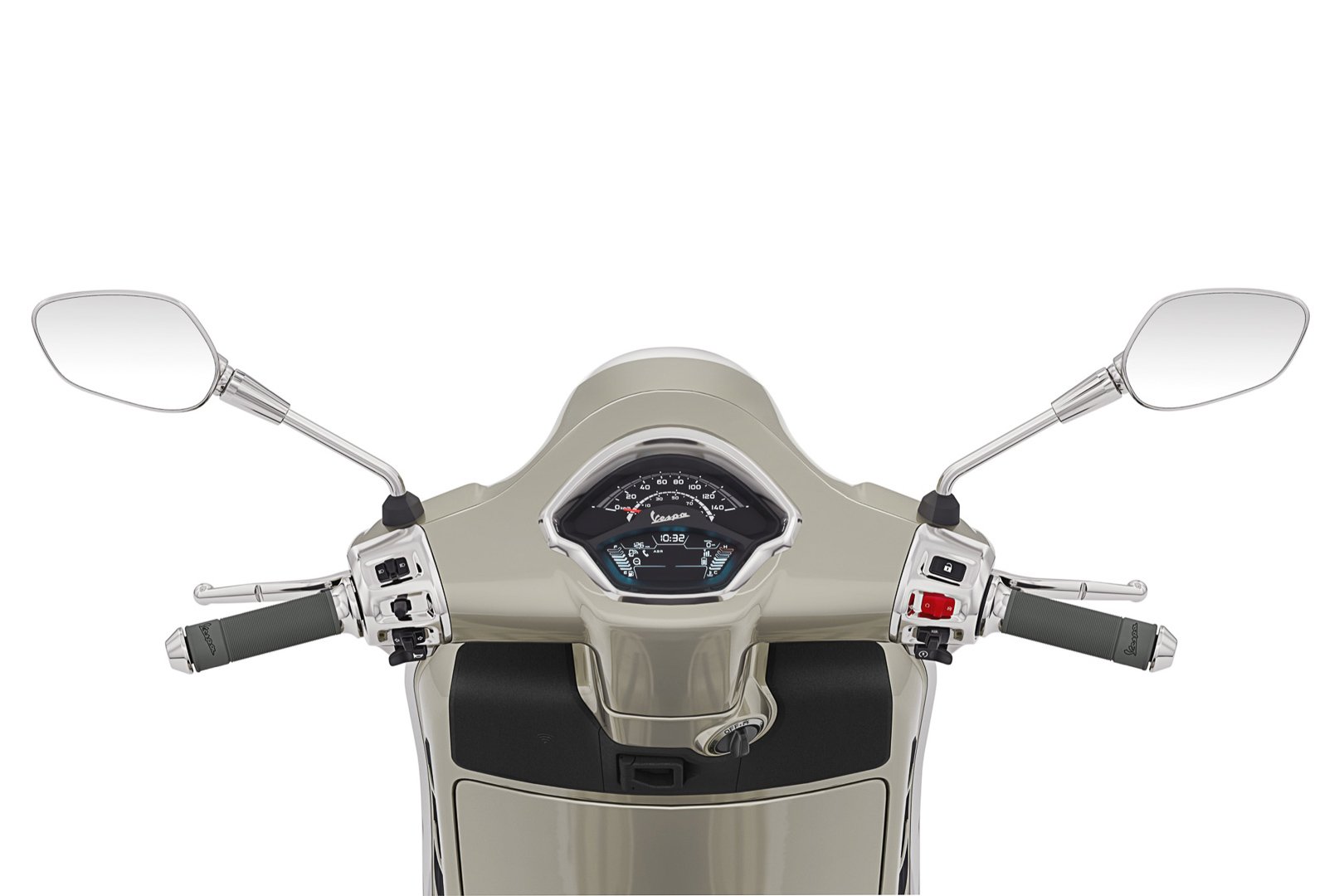 Of course, anyone who has perused our excellent Buyer’s Guides knows that a nearly $8k starting price will get you quite a bit of motorcycle. You could buy dubious Vespa clones or take a Pontedera factory pilgrimage while you’re at it. But this isn’t a motorcycle, a questionable knockoff scoot, or a vacation; it’s a Vespa. Cultural cachet is tough to buy these days, let alone the kind that comes from being the actual vehicle of post-war reconstruction. What began as an economical way for Italian citizens to start over became the wheels of change through the ’60s and ’70s and was since lifted by its countrymen atop a Roman pedestal. And that’s worth the price of admission for its devotees.A cultural icon, the 2023 Vespa GTS 300 remains. If you’re looking to get one stateside, they are arriving in dealerships now.Action photography by Alberto Cervetti and Marco ZamponiRIDING STYLE2023 Vespa GTS 300 SpecsENGINECHASSISDIMENSIONS and CAPACITIES2023 Vespa GTS 300 Price: $7799 MSRP