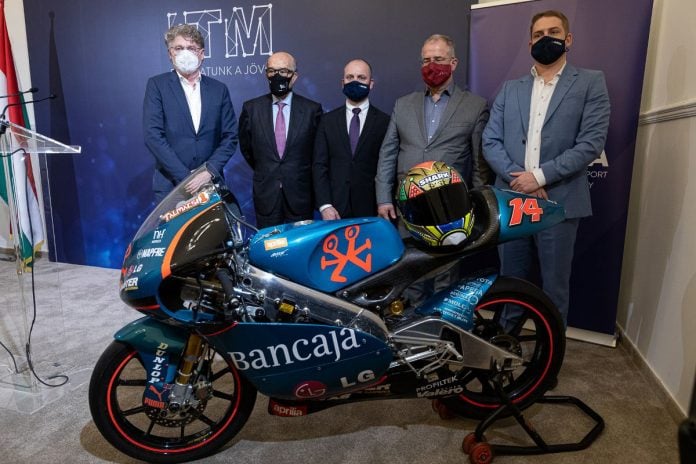 Dorna Sports and Kelet-Magyarország Versenypálya Kft. (Eastern Hungary Race Course Ltd.) have signed a deal to bring MotoGP to Hungary as soon as 2023. Construction on an all-new circuit in eastern Hungary, near the Romanian border, is scheduled to begin by summer 2021. Debrecen will be the host city, and it is the second-most-populous city in Hungary.Kelet-Magyarország Versenypálya CEO József Pacza was supported at the signing by Hungary’s  Minister of National Innovation and Technology László Palkovics, as well as 2007 125GP World Champion Gábor Talmácsi, a native of Budapest. Dorna Sports CEO Carmelo Ezpeleta represented Dorna and MotoGP at the event promoting the Hungarian Grand Prix.“Finally, this is coming true,” Ezpeleta said. “We’re very happy because in Hungary there is a lot of passion for the sport. Gabor was World Champion, and with this project, many more Hungarian people will start coming into our talent Cups and in our paddock. Our wish is to bring the best for the circuit—spectators, economic impact, give coverage of this region around the world on TV—but also to have the possibility of more Hungarian riders in the future through the Road to MotoGP.“It’s very emotional for me,” Talmácsi acknowledged. “I’m very proud to be here. My life story is basically that I represented my country as a rider for ten years in MotoGP, and now, in a different position, I represent Hungary as a motorsport expert, and I always try to give back, to support motorsport projects like this one. I’m proud to be part of the project. I love motorbikes. I love racing, and I always follow the sport even when I’m not racing. It’s a great moment for us to be here and that the government has signed the contract with Dorna. The location, near to Debrecen, is very important for the area, and the countries around Hungary are close—Slovakia, Ukraine, Romania—so fans can easily get there in the future, and that’s also great for the region.”It’s a business, of course, as Palkovics pointed out: “We are very grateful that Dorna decided to take our offer, and we are going to build a brand-new track and, in that sense, a brand new style of MotoGP track. The investment is quite a significant investment, but when we made our business models, it’s worth it. It is a good economic investment.”“From the beginning, we’ve been in contact with the people creating the project,” Ezpeleta added, “and I was in the region two years ago. What is happening there is very special. The FIM is following the works for homologation, and I think the circuit will be one of the best in the world.”Photography by Zoltan Iro.