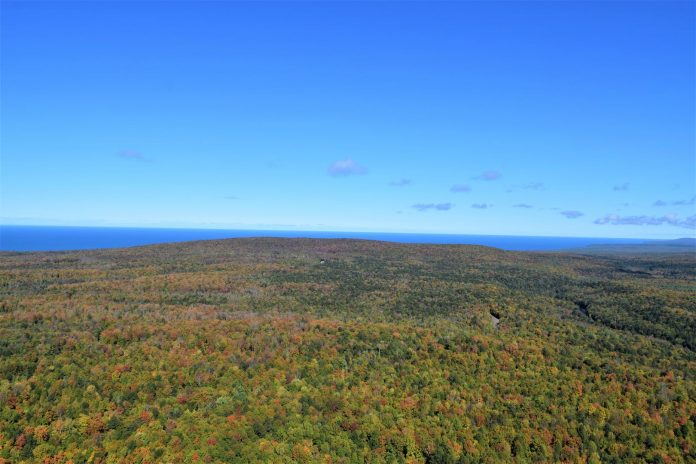 Gettin’ high in the U.P. – A Natural High Atop Towering Copper Peak!

We’ve told you about some of the points of interest and great touring destinations the Upper Peninsula of Michigan and northern Wisconsin in the past in stories like:Copper Peak, the largest artificial ski jumping tower in the world—so large, the sport is actually called “ski flying” not ski jumping—was described in some of our previous touring coverage. But in our prior coverage, we didn’t include what it’s like to go to the top of the massive tower from which the ski flyers launch jumps that can range out to nearly 600 feet!So, in this, the last week of September, with vivid fall colors spreading across the rugged northern highlands of Michigan’s Upper Peninsula and norther Wisconsin, we decided it was time to get up there, go to the top and show you the colors from a vantage point that can’t be matched anywhere on land in the entire Upper Midwest—or in most of North America, for that matter.First, a little history. Copper Peak was designed by Lauren Larsen, constructed in 1969 and opened in 1970 and has seen international ski flying competition held there a number of times, including coverage by the likes of ABC television’s iconic Wide World of Sports, is the site of the Red Bull 400, Trails Fest and other events. Indeed, this month marks the beginning of the 50th Anniversary celebration of the construction of the facility, so there couldn’t be a better time to check it out.For more, see: https://copperpeak.net/event/copper-peak-goes-gold-50th-celebration/.According to its website, “Copper Peak is the largest artificial ski jump in the world. The 35-degree, 469 foot, cantilevered inrun was constructed using 300 tons of COR-TEN steel in 1969 at a cost of just over $1 million. The upper observation platform is 1,782 feet above sea level and 1,180 feet above Lake Superior.The platform provides the highest, unobstructed, 360-degree vista in the Midwest, overlooking nearly 40 miles in every direction. The 810-foot chairlift rises 365 feet to the crest of the hill. The 18-story elevator ride takes about 55 seconds. The structure is designed to withstand winds in excess of 190 mph. In a brisk wind, the top of Copper Peak has been observed to sway as much as 18 inches, by design.” 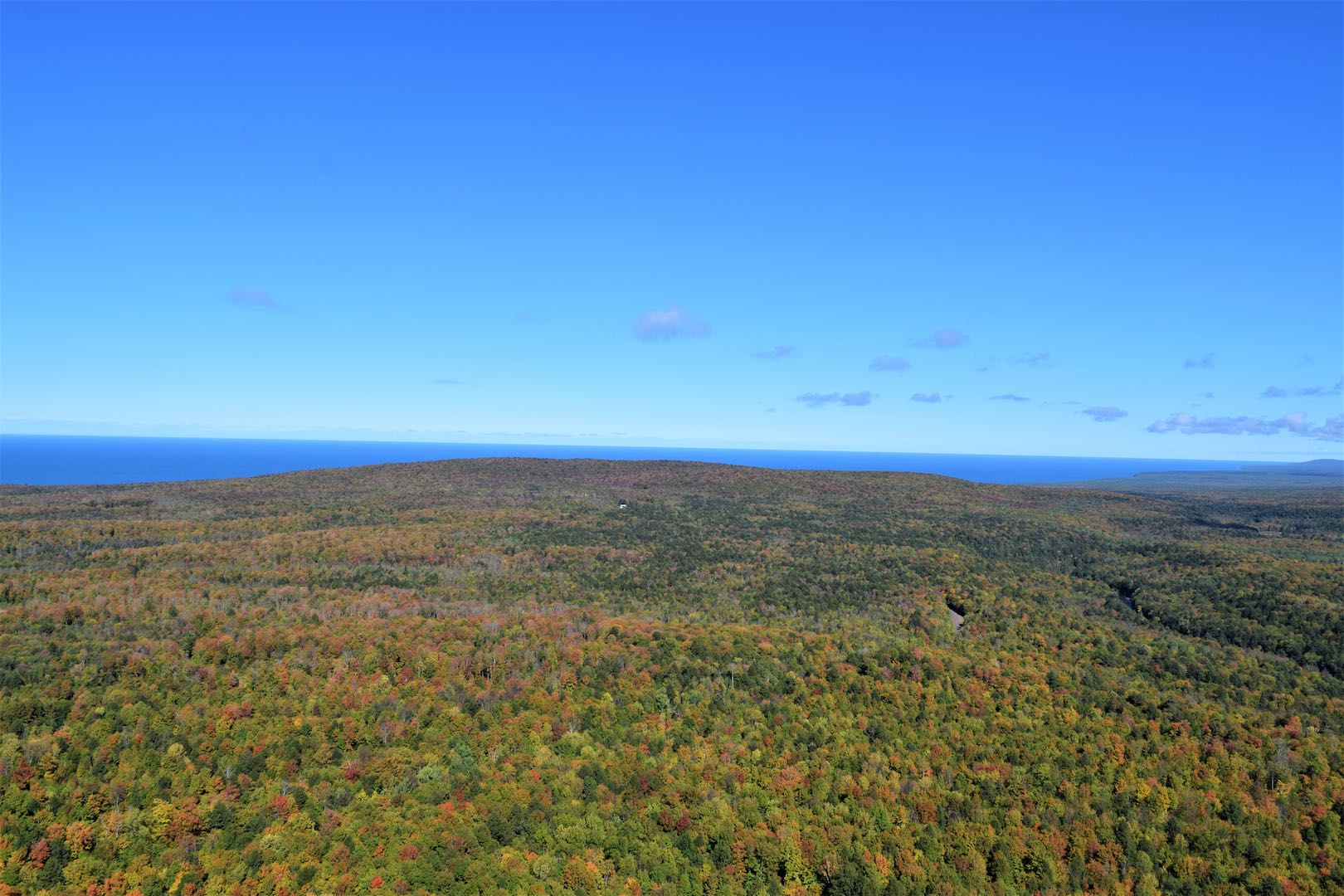 Copper Peak is located north of Ironwood, Michigan at N13870 Copper Peak Rd, by following Lake Road (STH 505) north off of US-2 (Cloverland Drive) in Ironwood then east on Airport Road to STH 513, which is Black River Road, then north to Copper Peak Road. It is also accessible from Bessemer, MI via STH 513.The roads out to the site are well-paved, but the final half mile to the site has some areas of broken blacktop and gravel, but nothing that should pose any problems. Lift tickets and Copper Peak commemorative items are available at the gift shop at the foot of the hill. A short walk takes you to the chair lift and that takes you at a very safe-feeling pace to the top of the bluff.The attendants running the lift know their stuff and help even complete novices get safely aboard the chairlift with no problems. Indeed, one of the folks going up when I was heading up was a 91 year-old fellow going up alone and staff helped him get situated very easily.After off-loading at the top of the bluff, there’s a short walk down a path to the base of the tower where the elevator takes you up to the observation deck 18 stories overhead. From there, get out your camera and climb the stairs and traverse the decking all the way to the top.There was a steady breeze out of the north the day my long-time riding buddy, Dean Massoglia and I went up to the top, but the sway of the tower was very minimal; a few inches at most and it was barely noticeable to me, even at the top-most deck. One of the things that may be most striking, particularly to riders who come in from urban settings is something that is subtle and could easily be missed: the quiet. About the only thing you hear up there is the wind.If you don’t do heights very well, the adventure ride to the top of Copper Peak may not be easy to do, but if you can, it is so worth it! The panorama in all directions is breathtaking, particularly as fall colors are coming on since it sits smack-dab in the heart of the Ottawa National Forest.To the north is North America’s inland ocean, Lake Superior, the largest body of fresh water in the world. On this day, it mirrored the vibrant blue sky and it stretches all the way to Canada. East and south is the Black River basin and the ridges of the ancient Penokee mountain range where Big Powderhorn Mountain, Blackjack, and Indianhead Mountain Big Snow Resort offer year-round fun and when the snow flies in a few weeks, great skiing and snowboarding.To the south and west, more of Michigan and northern Wisconsin’s lakes, rivers and outdoor attractions as well as the view across the western end of Lake Superior toward Minnesota. Truth be told, just seeing this amazing venue from the base of the hill is impressive and well worth the trip.For me a special treat was meeting up with one of my instructors from Gogebic Community College, where I got my degree in Mechanical Design and Drafting back in 1975. Charles Supercynski was one of the people who managed to teach me the math skills that kind of work takes and, to my amazement, he recalled the years I was a student in his class! He is now very active in the operations and future plans for Copper Peak as the President of its board of directors, he is a former ski jumper himself, is in the Ski Jumping Hall of Fame and is the author of Soaring with the Eagles, a retrospective of the region’s history of ski jumping.After seeing the bird’s-eye view of Lake Superior, it makes sense to take the short ride continuing along Black River Road to the big lake and Black River Harbor, not to mention the five waterfalls in the Black River basin between Copper Peak and the lake. Just take a right turn on Black River Road and keep going to its end at the harbor. Cross the suspension foot bridge and follow the footpath to the breakwater and the beach beyond.If the soaring height of Copper Peak is a little too much but you’d still like to get high—with your feet on the ground—you can ride right up to a spectacular view from atop Mt. Zion on the north side of Ironwood, by following Margaret Street north from U.S. 2 to the campus of Gogebic Community College, which includes the Mt. Zion Ski Area, take the nice, recently re-paved road at the top of the loop and you can even see Copper Peak nearly twenty miles north from the top.If you’re touring in the upper Midwest and northern Wisconsin and the Upper Peninsula of Michigan are in the plan, check out the sights and the colors—but don’t wait—it won’t be too long before the leaves pass peak color up there and the north wind really gets cool!Fall color reports: