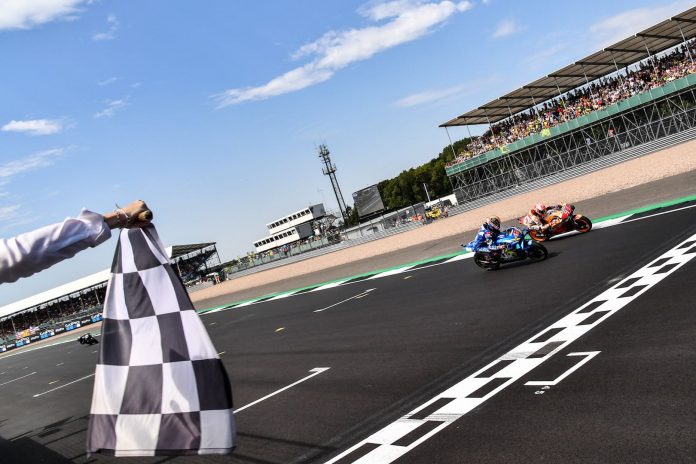 Ahead of any on-track action at Silverstone for the 2019 British Grand Prix, we reported that there was no clear favorite for this year’s round.For the past five rounds – not including 2018 that was canceled due to rain and large pockets of standing water that were fixed with some repaving for 2019 – five different winners won.When Saturday’s qualifying session wrapped up, though, and Repsol Honda’s Marc Marquez became the clear favorite. He took the pole in record-breaking fashion, beating Monster Energy Yamaha’s Valentino Rossi to the top qualifying position by 0.428 of a second.Marquez continued this strength during Sunday’s 20-lap British Grand Prix. He remained out front from pole but wasn’t alone.Team Suzuki Ecstar’s Alex Rins diced with Marquez for the entire race and was able to beat Marquez to the finish line by a mere 0.013 of a second. This was the fourth-closest finish in premier class; the closest race was the 2006 Portuguese Grand Prix at Estoril when Valentino Rossi beat Toni Elias to the line by 0.002 of a second.Claiming the final podium position was Monster Energy Yamaha’s Maverick Vinales, who finished 0.620 behind Rins. The next closet rider – Rossi – crossed the line 11.439 seconds back, just ahead of Petronas Yamaha SRT’s Franco Morbidelli.This was Rins second victory of the season, his other arriving at Circuit of the Americas in Texas where Rins ended Marquez’s five-year run of five race wins from pole. He also won that race on the final corner.“Unbelievable, unbelievable! I’ve beaten two legends: Valentino in Texas, Marquez here in Silverstone,” Alex Rins says.“It was so crazy. I beat him today but now I need to continue; I know it will be difficult. I made some mistakes, I nearly crashed at the first corner – I had a big moment. Two laps to the end I crossed the line very close to Marc and I thought the race was over but then I saw one lap remaining and thought: ‘wow, Alex, come on you need to keep pushing’.“I was able to cut a lot of time in the first and second sectors and then in the last sector Marc was much stronger than me. Into Turn 16 he was able to brake really hard. The last lap was unique though and it was possible for me to overtake.“I have a lot of confidence with my Suzuki right now. We work so hard during the practices to get the feeling right and I was able to play with my bike to brake harder.”As for Marquez, this was his 11th podium finish in 12 races, which includes six wins and five second-place finishes. He continues to lead the points battle with 250 points – now 78 ahead of Mission Winnow Ducati’s Andrea Dovizioso. 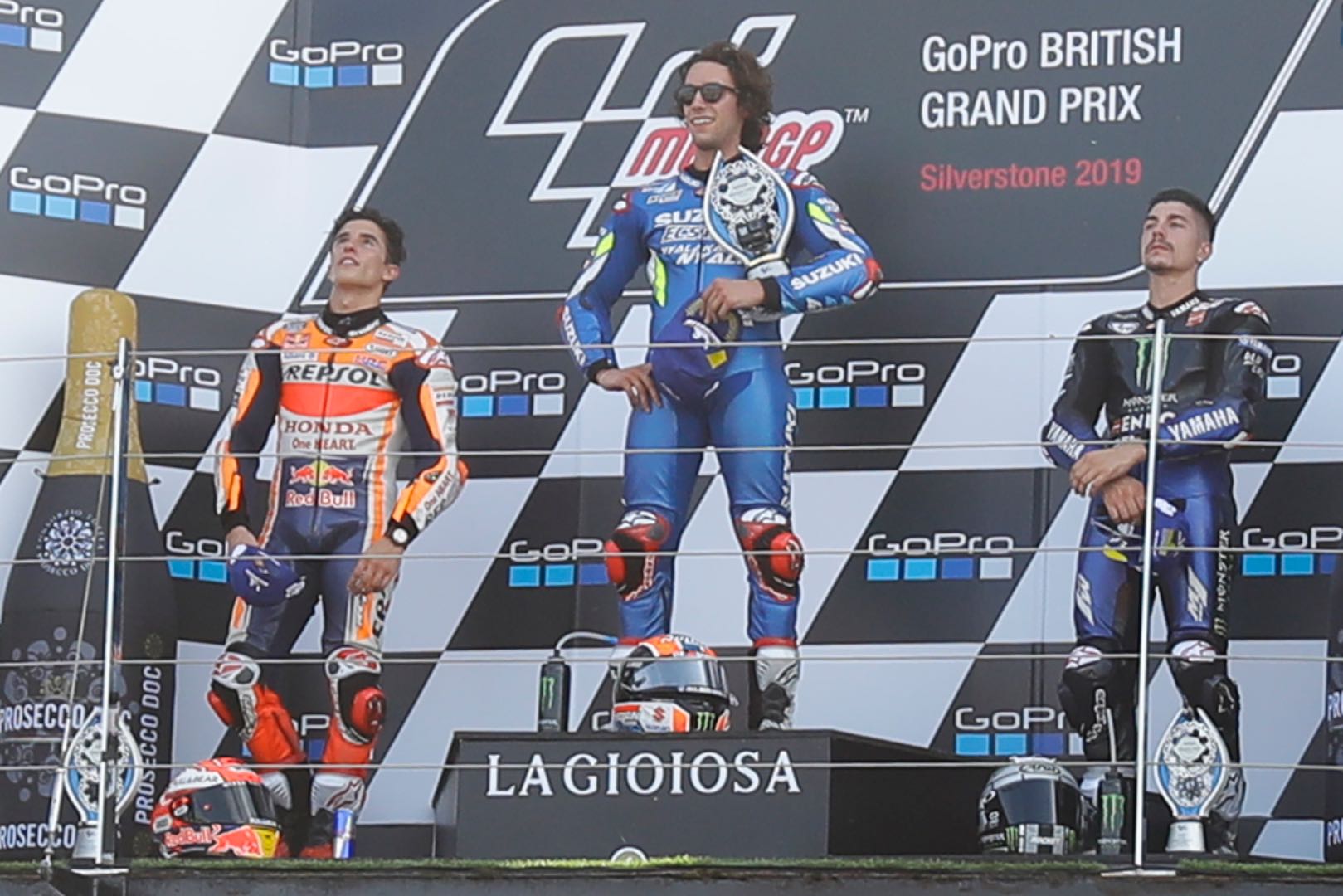 “I am happy with the result for the championship but not the result for the race as to lose out in the final moment after leading is not the best feeling,” Marc Marquez says.“Spending the whole race in front is difficult here because you use more of everything. I tried to go slow for one lap to see if Rins would lead, but he didn’t and I knew Viñales was behind us so I kept pushing. My target wasn’t the race, it was the championship and if the Yamaha riders arrived maybe we could have finished lower.“In the last turn I had a moment on the front and had to close the gas which let Rins through but we are happy because we leave with 78 points over second but I hope Dovi is OK after a big crash like that, I hope he can recover well and return because it is always better when you earn the points fighting.”Dovi, who had also won at Silverstone in 2017, crashed out on the first lap after his GP19 was struck by the Petronas Yamaha YZR-M1 piloted by Fabio Quartararo after Quartararo high-sided in front of Dovi.Dovi hit the pavement hard, and was flown to the Coventry Hospital due to several contusions and a concussion. Fortunately, medical examination said there were no further complications. 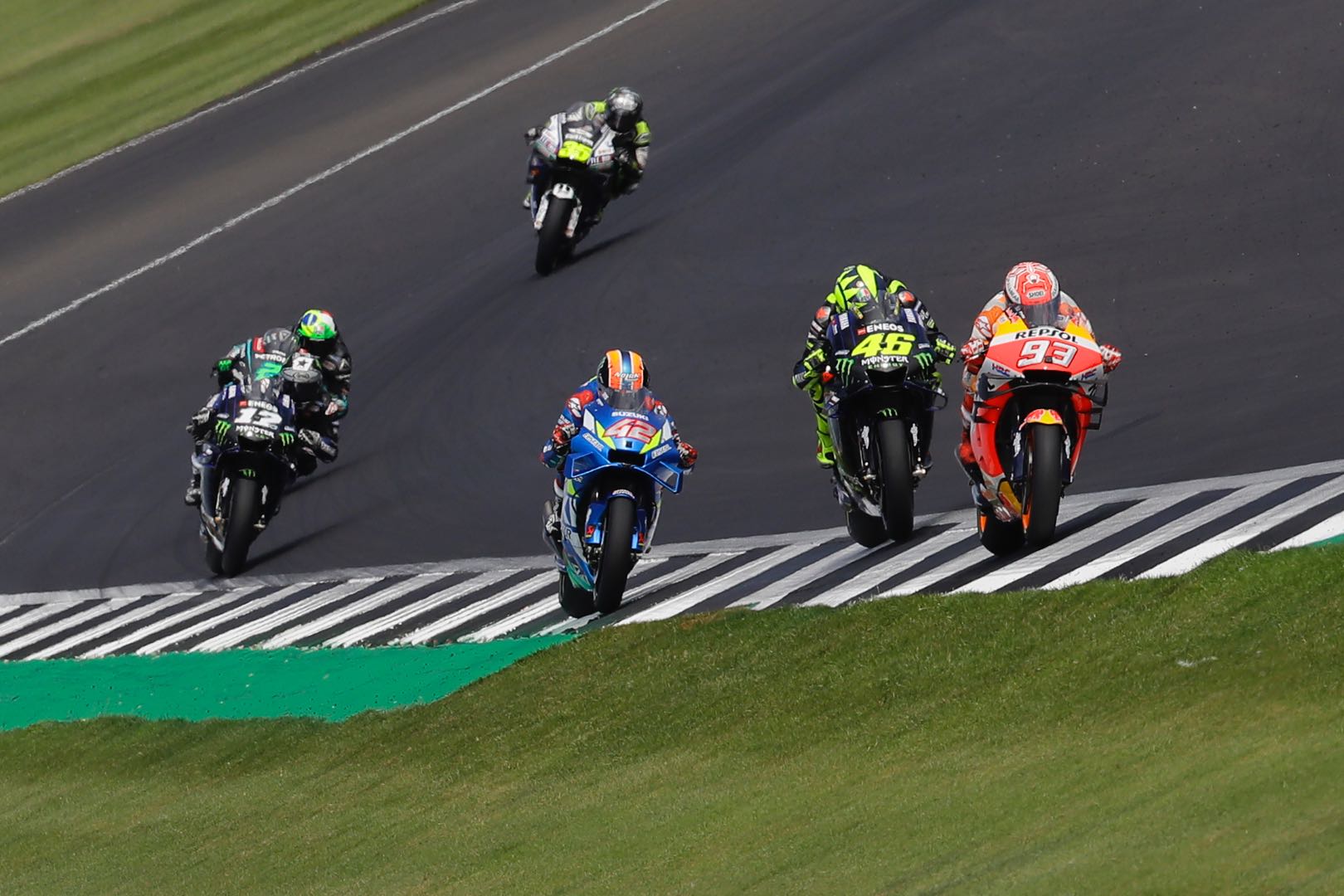 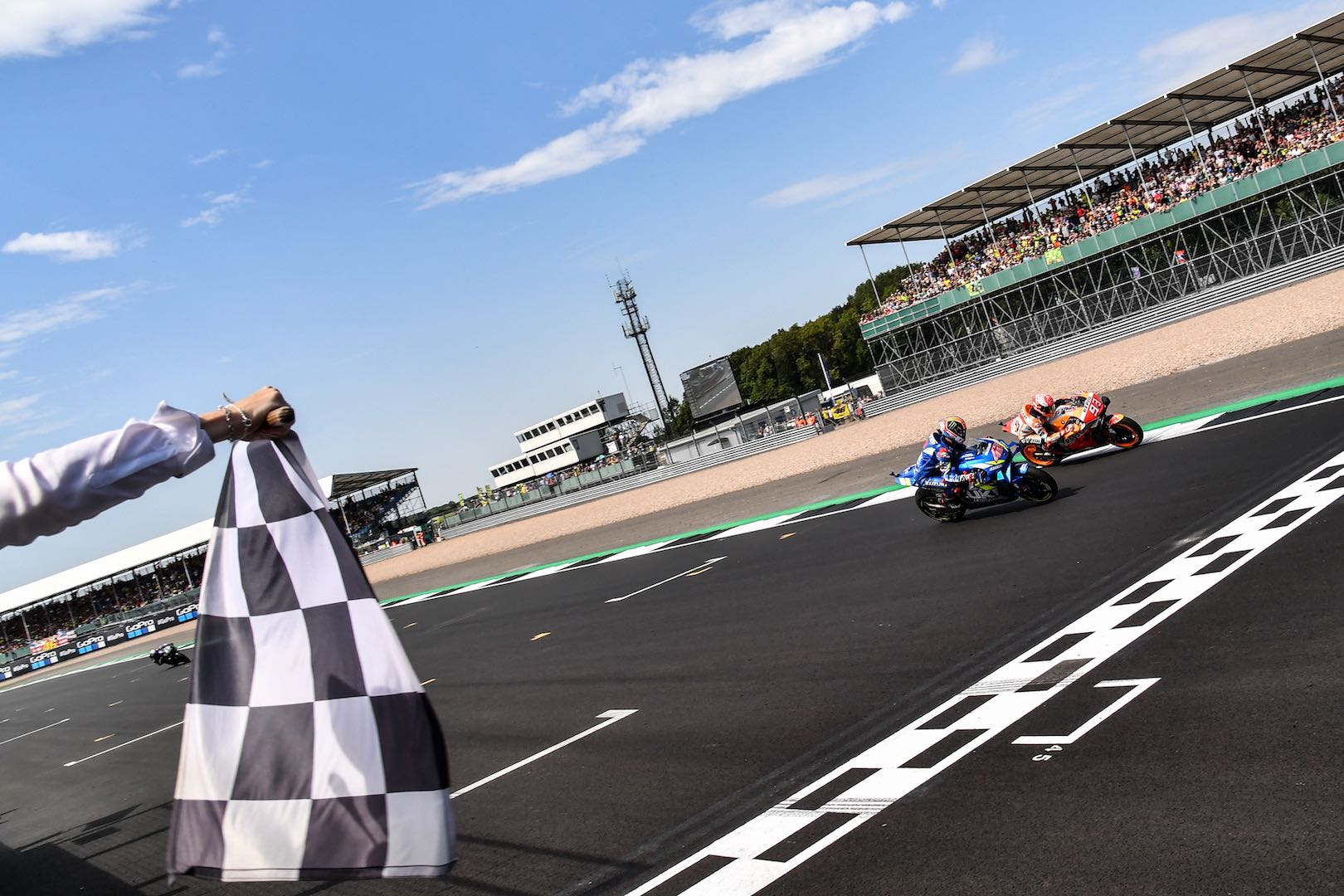