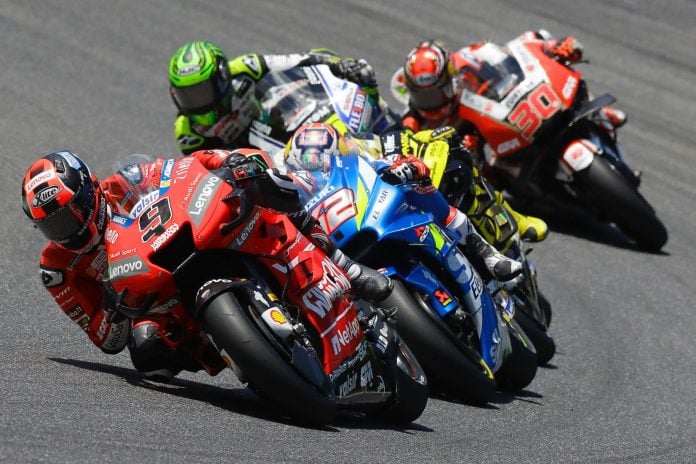 As the 2019 MotoGP Championship rolled into the foothills just outside of Florence for the Italian Grand Prix, there were three favorites: Repsol Honda’s Marc Marquez, Monster Energy Yamaha’s Valentino Rossi and Mission Winnow Ducati’s Andrea Dovizioso.Rossi, who secured seven-straight wins before his home crowd at Mugello from 2002-2008, crashed out while in 22nd place with 16 laps to go, ending his day. 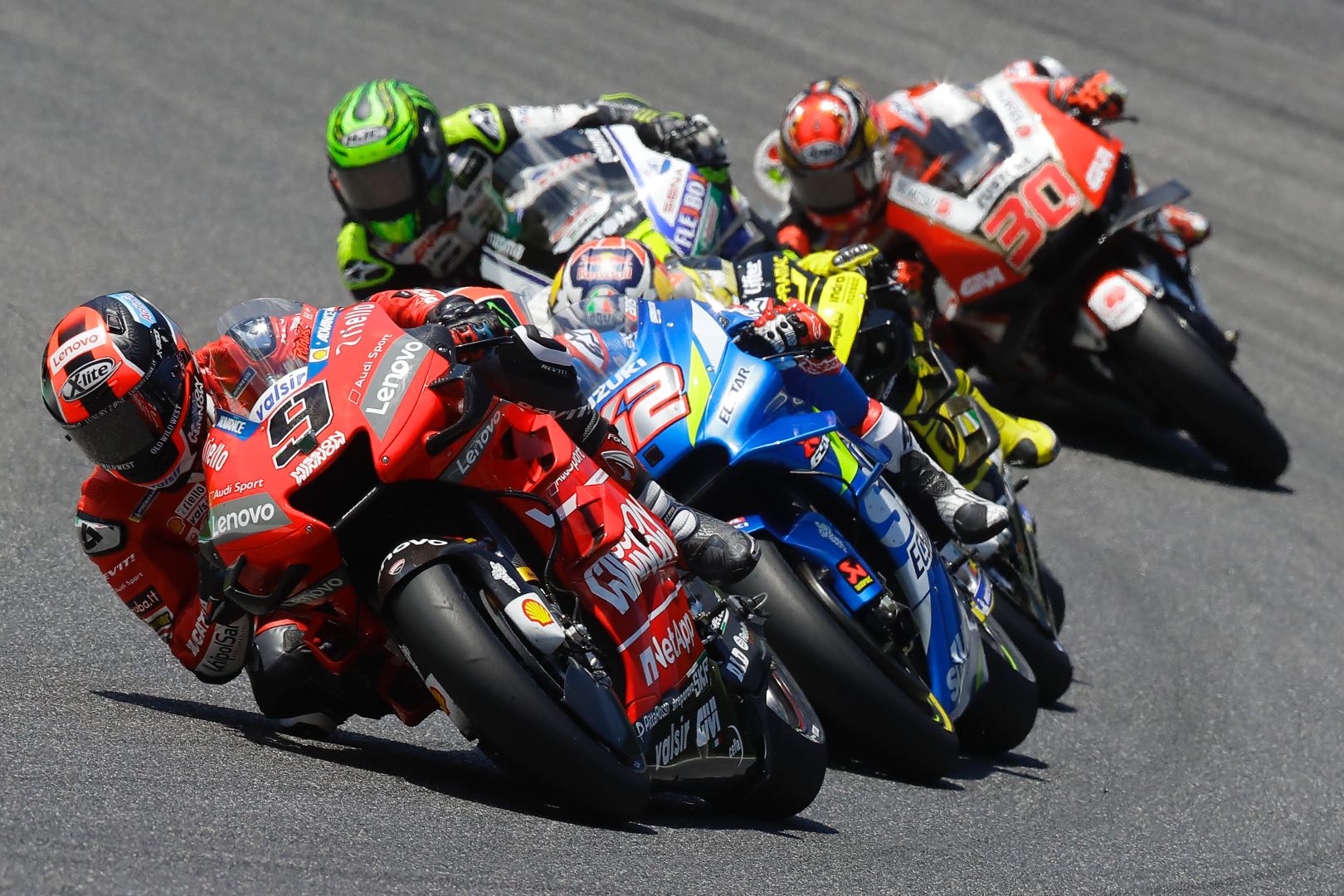 Marquez, who claimed his fourth pole of 2019 Saturday, led the opening four laps. But he was passed by Mission Winnow Ducati’s Danilo Petrucci and then Dovizioso. Though Marquez gave it all he had, he could not match the speed of Petrucci’s Ducati GP19.Petrucci led 14 of 23 laps to earn his debut MotoGP win by a mere 0.043 of a second ahead of Marquez. Dovizioso took third, 0.338 of a second behind.This was Ducati’s third-straight win at Mugello. Dovizioso won in 2017, and last season the win went to former Ducati rider Jorge Lorenzo.“I really wanted this victory and when I realized the pace at the front wasn’t too fierce and I was able to manage my rhythm in the leading group, I told myself it was the right time to go for it,” Danilo Petrucci says.“I tried to control the race by staying in the lead to avoid the risk of losing too many positions in the battle, dictating the pace to preserve the energies and the tires for the final rush. I was a bit worried about the slipstream as we entered the final lap, but I managed to brake really deep and find a small gap between Andrea and Marc to retake the lead, then I simply pushed as hard as I could until the checkered flag.“A good chunk of this win came thanks to Andrea, who took me under his wing this winter and gave so many precious tips. Now we’ll keep fighting together for the championship.”Also running with the lead group the entire race was Team Suzuki Ecstar’s Alex Rins; the Spaniard, who won at Circuit of the Americas, finished fourth, 0.535 behind Petrucci. The next closest rider was nearly six seconds behind – LCR Honda’s Takaaki Nakagami.Monster Energy Yamaha’s Maverick Vinales fiished sixth, ahead of Mission Winnow Ducati test rider Michele Pirro, LCR Honda’s Cal Crutchlow, Red Bull KTM Factory Racing’s Pol Espargaro, and Petronas Yamaha SRT’s Fabio Quartararo.With his second-place finish, Marquez, who won in Argentina, Spain and France, now has 115 points, 12 ahead of Dovizioso. Rins is third with 88, and Petrucci fourth with 82.The series now breaks for two weeks ahead of the Catalunya Grand Prix at the Circuit de Barcelona-Catalunya June 16.Following is from the official MotoGP recap:Off the line and down to Turn 1 for the first time, Marc Marquez fended off his pole position advantage and got the hole-shot, ahead of a fast-starting Cal Crutchlow and Andrea Dovizioso, who got from ninth to third. Fabio Quartararo got a far from ideal start and went backwards, whilst Alex Rins got a phenomenal start and climbed seven positions by the end of the opening lap.In the early stages however, Jack Miller (Pramac Racing) was beginning to push on in the leading group, with Alex Rins making passes behind, taking Cal Crutchlow at Turn 1. Downfield, Valentino Rossi (Monster Energy Yamaha MotoGP) was into the points and chasing Jorge Lorenzo (Repsol Honda Team).However, it wasn’t long before the first drama of the race would unfold, as home-hero Rossi tangled with Joan Mir (Team Suzuki ECSTAR) at Turn 4, running across the gravel and rejoining in last place. However, a few laps later, on lap eight, the veteran Italian crashed at high speed at Arrabbiata 2, ending his hopes of success after what was already a tricky home round.At the front of the field, fireworks were already being set off, as Alex Rins and Dovi hit the front. Marc Marquez was also being pushed back down the order, with 14 laps to go, as first, Danilo Petrucci got ahead of him and then, Jack Miller pushed his way through.By now, Marquez was down in fifth and at the front of the field, Danilo Petrucci and Alex Rins started to press hard. The leading group consisted of nine riders, with Crutchlow, Takaaki Nakagami (LCR Honda IDEMITSU), Francesco Bagnaia (Pramac Racing), Fabio Quartararo (Petronas Yamaha SRT) and Maverick Viñales (Monster Energy Yamaha MotoGP). Soon though, the group began to fragment, with Francesco Bagnaia crashing out with 12 to go at the final corner, as his Italian GP hopes went up in smoke.Cal Crutchlow fast start didn’t last long, as the British rider began to slip back down the field, with Takaaki Nakagami leaving him. The Japanese rider was now lying in fifth and whilst lapping a tad slower than the quintet ahead of him, he was holding his own and pulling clear of those behind him.Despite momentarily losing touch, Jack Miller put in the fastest lap of the race in fifth position, pulling himself back into contention. However, disaster struck the Australian as he crashed at Turn 4. This took the leading group down to four riders, but the scrap in the final few laps was incredible.Going into the last lap, after various lead changes, Dovizioso got ahead of Marquez at Turn 1 but ran wide, leaving the door open for Danilo Petrucci to scurry back through and take the advantage, to the roar of the crowd. Petrucci found himself leading at his home Grand Prix, with Marquez fighting into second; the stage was set for a thrilling showdown.Marquez and Dovizioso tried their best to get on terms with Petrucci and in the final corner, Marquez gained massively, but try as he might, Petrucci held on for his first ever win, ahead of the Repsol Honda Team rider and ‘Desmo Dovi’ in third. Alex Rins lost touch with a moment on the exit of Turn 15 but came home fourth, with Takaaki Nakagami completing the top five.Maverick Viñales moved into sixth place ahead of Cal Crutchlow in the closing stages and completed the race in this position, whilst Michele Pirro (Mission Winnow Ducati) took seventh away from Crutchlow in the closing stages. The Brit came home eighth, whilst Pol Espargaro (Red Bull KTM Factory Racing) and Quartararo completed the top 10.