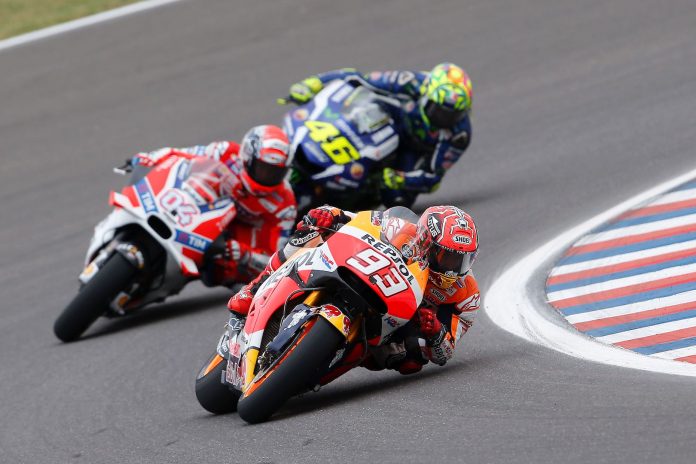 After five rounds in 2019 MotoGP, only three riders have claimed victories: Mission Winnow Ducati’s Andrea Dovizioso, Team Ecstar Suzuki’s Alex Rins and the reigning five-time MotoGP Champion, Repsol Honda’s Marc Marquez.Marquez claimed three of those, though, including the last two rounds at Jerez and Le Mans.Regardless of having 60 percent of the wins, Marquez holds a slim eight-point lead over Dovizioso as the series heads to the Mugello circuit located northeast of Florence. The next closest riders are Rins, who’s 20 points behind, and Monster Energy Yamaha’s Valentino Rossi, who is 23 behind.Marquez, who claimed Honda’s record 300th win in the premier class at Le Mans, doesn’t have much luck at Mugello. The 26-year-old Spaniard has only earned one MotoGP win there (2014). Last year he finished 16th, and the year before sixth, but Marquez is banking on hard work during Friday practice to help ignite his performance for the Italian Grand Prix.“After Le Mans I am first of all hoping for good weather in Mugello,” Marc Marquez says. “I like the circuit, even if we have not always had the best results there. If we keep working well from Friday as in previous rounds, I feel confident we can have a good race. Our rivals are always very strong and very close at this circuit, it can be a fun race on Sunday!”This fun will include the largest competition from Rossi and the Ducati riders, the latter winning the last two seasons before a home crowd of Desmosedici fans. There’s no doubt the crowds will resemble a sea of yellow and red.Rossi is the most successful rider at Mugello with nine victories across all classes – including a streak of seven MotoGP wins from 2002 through 2008 (2x Honda; 5x Yamaha). Last year he claimed pole, and finished third behind former Ducati teammates Dovizioso and Jorge Lorenzo; the 2018 Italian GP was Lorenzo’s first win on the Ducati.“I’m glad it’s time for Mugello, it‘s a special weekend and a special race for all the Italian riders,” says Valentino Rossi. “It has a fantastic atmosphere, but it’s also a bit tricky to manage with all the fans, but it‘s really great. This is one of the most beautiful race tracks of the year.“It‘s a track I really like, but it will be hard because everybody is very fast. Mugello does have less acceleration from a low speed, so I think we could be faster than in Le Mans, but it is also true that there is a very long straight. Surely this will be our weak point, but if we work well, we can defend ourselves. We need to try our best to be competitive and give the maximum.”The other huge threat to Marquez is the factory Ducati riders, who won the previous two rounds held at Mugello. Dovizioso won in 2017, finished second last season, and has two additional GP podiums before a home crowd.Dovizioso has some extra incentive considering he will start his 300th Grand Prix race Sunday.“To arrive at Mugello after a result such as the one we achieved at Le Mans, with three Ducati in the top four positions, is certainly positive even though we aim for more,” says Andrea Dovizioso. “This is our home race and I believe we can be competitive and fast, so our goal is first of all to step on the podium once again. As we’ve seen in these first races, this year our rivals are also particularly fast, so it’s difficult to make predictions.“As for us, we will not settle for what we achieved so far and we’ll try our best, analyzing the data, to keep working and understand where we can make further improvements. I hope the weather is good, because I have great expectations for this round.”The other threat will arrive from Dovizioso’s teammate Danilo Petrucci, who has claimed his best personal result in MotoGP with a third at Mugello in 2017. All together Ducati has 12 podiums at Mugello since joining MotoGP in 2002, including three wins – one each by Casey Stoner (2009), Dovizioso and Lorenzo.In regards to records, Rossi has the all-time lap record with a 1:46.208 (2018), and Dovizioso the top speed with just over 221 mph. The other one goes to Marquez, who holds the race record lap of 1:47.639.Unlike Le Mans two weeks ago, the weather at Mugello is supposed to be dry and sunny. Practice gets underway Friday, and will be followed by Saturday’s qualifying and Sunday’s 23-lap Italian Grand Prix. For television times, visit 2019 MotoGP US TV Schedule.