Stelvio revisited – The beauty of it all – Touring the Dolomites

Precious whitened mountain peaks pass by like a myriad of Toblerones. The big V-twin powering the 2010 Moto Guzzi Stelvio 1200 NTX ABS produces effortless torque beneath me. I have left Cortina behind, and after two Alpine passes, I know that the Stelvio Pass itself is only 58 miles west of me. On this journey, the Stelvio is denied the ride to its second home and place it is named after—its first home being Mandello del Lario, of course. I am doing the Dolomites four passes route, and Stelvio is not a part of that.

Everything I have seen from the seat of the 2010 Moto Guzzi Stelvio 1200 NTX has been beautiful beyond description. As I pass the Marmolada, which is the highest peak in the Dolomites, the road is 6500 feet above sea level, while the summit itself stands at over 10,000 feet. I admire its glacier while pushing on at a heart-stopping pace through the countless hairpin bends. 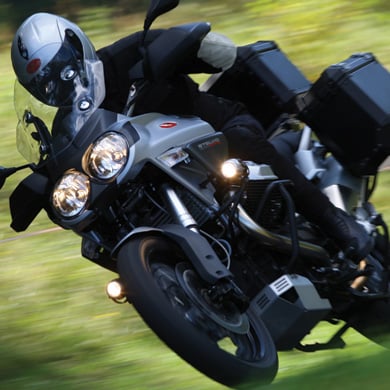 The NTX is Moto Guzzi’s answer to BMW’s R 1200 GS Adventure, and it is well-equipped as standard. The large aluminum panniers enhance the Stelvio’s brute and menacing front view. The extra steering lights also emphasize the serious touring motives of the new NTX. The Dolomites region I’m riding through is also known for another Italian/German clash.

During the Great War, thousands of Italians, Austrians, and Germans slaughtered each other in these mountainsides. Austrians used motorbikes with sidecars in warfare for the first time, sniping on Italian troop concentrations and fleeing civilians to create chaos on the narrow roads. Fortunately, I can ride my Italian motorbike without any Austrian trouble, but isn’t it interesting that the main Adventure segment protagonists are still German (BMW GS), Austrian (KTM Adventure), and Italian (Moto Guzzi Stelvio)? 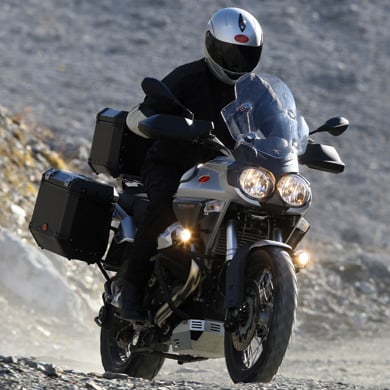 Mountainous regions usually glorify strong and healthy men and, when he’s not riding a Guzzi Stelvio or BMW GS, he’s probably climbing the rock or jumping off it. My point is that the Stelvio is a big butch Adventure tourer and it’s right at home in the Dolomites. With the NTX’s extensive engine and drive shaft protection, it’s a lot safer to take it off the beaten track, too, but only a professional would be brave enough to take 550+ pounds off-road.

There is still one major problem with the 2010 Moto Guzzi Stelvio 1200 NTX for the true adventure rider, and that’s the limited fuel carrying capacity of less than five gallons. An experienced Africa adventure rider once told me though that where there are people, there will be fuel. Perhaps if you had an eight-gallon fuel tank, you’d be more likely to be tempted to stray so far away from people that if you then run out, you’re left only with the vultures for company waiting for your flesh.

The wide and comfortable seat height can be adjusted from 32.3 inches to 31.1 inches. The tall windscreen can also be adjusted, and features small wind deflectors on each lower side. With the seat adjusted to its lower position, you naturally get better protection from the windscreen. So, particularly in rough weather, the lowest seat position works well. Should you either need to stretch your legs more, or actually ride off-road, the higher position will give better results. The solid handguards complete the rugged NTX looks, and I’m glad Moto Guzzi went with proper guards rather than just something for show. 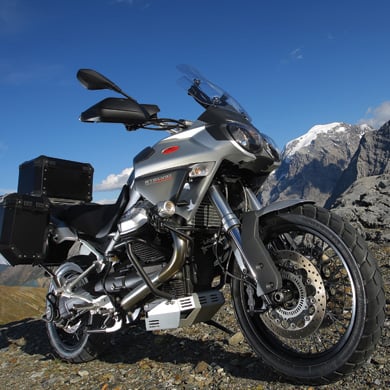 Up the first mountain passes, I’m surprised by how agile the big Italian machine is. Despite its XL size, the Stelvio handles like a smaller sportier motorcycle. It’s a delight leaning the Stelvio into the hairpin corners, and then fire it out to encounter more of the same.

The front braking is a very powerful dual radially mounted four-piston Brembo affair biting on 320mm discs. The rear brake is a 282mm two-piston set-up and linked by ABS. The ABS worked satisfactorily on the road, and also perfect on the spot of rain I encountered. For the gravel stuff you have to turn the ABS off, or you won’t be able to steer with the rear brake and will quickly find yourself in big trouble—I’m just wondering why no one can’t just make a switch that definitely and instantly tells you that ABS is now on or off.

All available systems today you have to hold some button in for ages and are usually left having to test-slide the rear before knowing whether ABS is on or off as the ABS light either goes on or blinks or goes off. A switch would also get rid of that bloody annoying “safety” feature where ABS always resets to on after restarting the ignition. 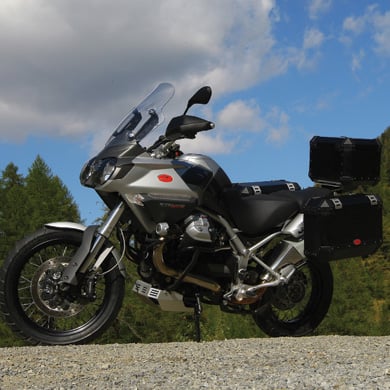 I only rode a tiny piece of road on gravel and some grass in the Dolomites. It was enough to tell you that, first of all, you need to know what you’re doing for any off-road riding. Even a proper hard enduro doesn’t just ride itself; it needs rider input and expertise. Second, lighter is always better. Third, you need to be in good shape for long off-road journeys even if they’re not complicated or technical routes.

Just because the Stelvio NTX looks the part, it doesn’t mean it will do what you want if you aren’t an adequately trained rider. I am confident that the Stelvio NTX would fare well as long as the terrain is open enough for speed, because that’s what you need with a heavy bike off-road. Add knobby tires and Stelvio NTX will climb and brake better and slide less on the grass, too.

For relaxed touring two up with luggage, the 2010 Moto Guzzi Stelvio NTX features the second-generation Quattrovalvole engine with new cams and improved midrange. A larger airbox is also in place. Together, all this provides more torque and a max power figure of 105 horsepower at 7250 rpm. The 3.6 additional ft/lbs of torque and the improved fuel injection are easy to notice compared to the 2006-2008 model. If you’re wondering how the Stelvio NTX sounds, I can tell you that this air-cooled V-twin produces music for the ears limited by a large silencer on the left side of the bike.

The Stelvio NTX accelerates smoothly and firmly from 2000 rpm to past 7000. Considering that you lose between 10 to 20 percent of your power when riding at high altitude, the NTX is just perfect up in the Dolomites. There’s always plenty of power on tap, and the delivery is the best yet from the relatively new Quattrovalvole motor.

The shaft drive does its business almost unnoticed, and the gearbox and lighter clutch are a delight to use. Cruising in sixth gear on straighter roads proved a comfortable experience. When I have time, I take a look at the instrument panel, which includes easy to read information from speed to revs, fuel consumption, average fuel consumption, and max speed. If you get the heated grips, you can read the heating levels on these on the instrument panel also. This is pretty much all you need for touring.

The 2010 Moto Guzzi Stelvio 1200 NTX is a well-equipped tourer with large solid panniers, and ABS is standard. The air-cooled 1151cc 90-degree V-twin is a gem and makes for a relaxed, but still sporty, as you like touring experience. The extra torque was very welcome in the high-altitude Alpine passes, and there is very little to complain about. I hope Moto Guzzi continues to develop the Stelvio though and put it through some tough challenges on the way. The 2010 Moto Guzzi Stelvio 1200 NTX ABS is at least one of the best, if not the best, Italian touring bikes available on the market.