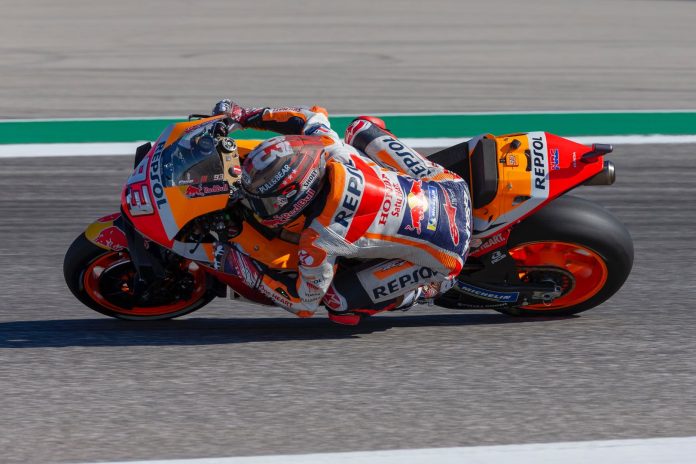 Heading into round three of the 2019 MotoGP Championship at Circuit of the Americas in Austin, Texas, the clear favorite was Marc Marquez.The Repsol Honda rider was untouchable in Texas since COTA joined Grand Prix racing back in 2013. Marquez had won all six races from 2013-2018, taking each one from pole. 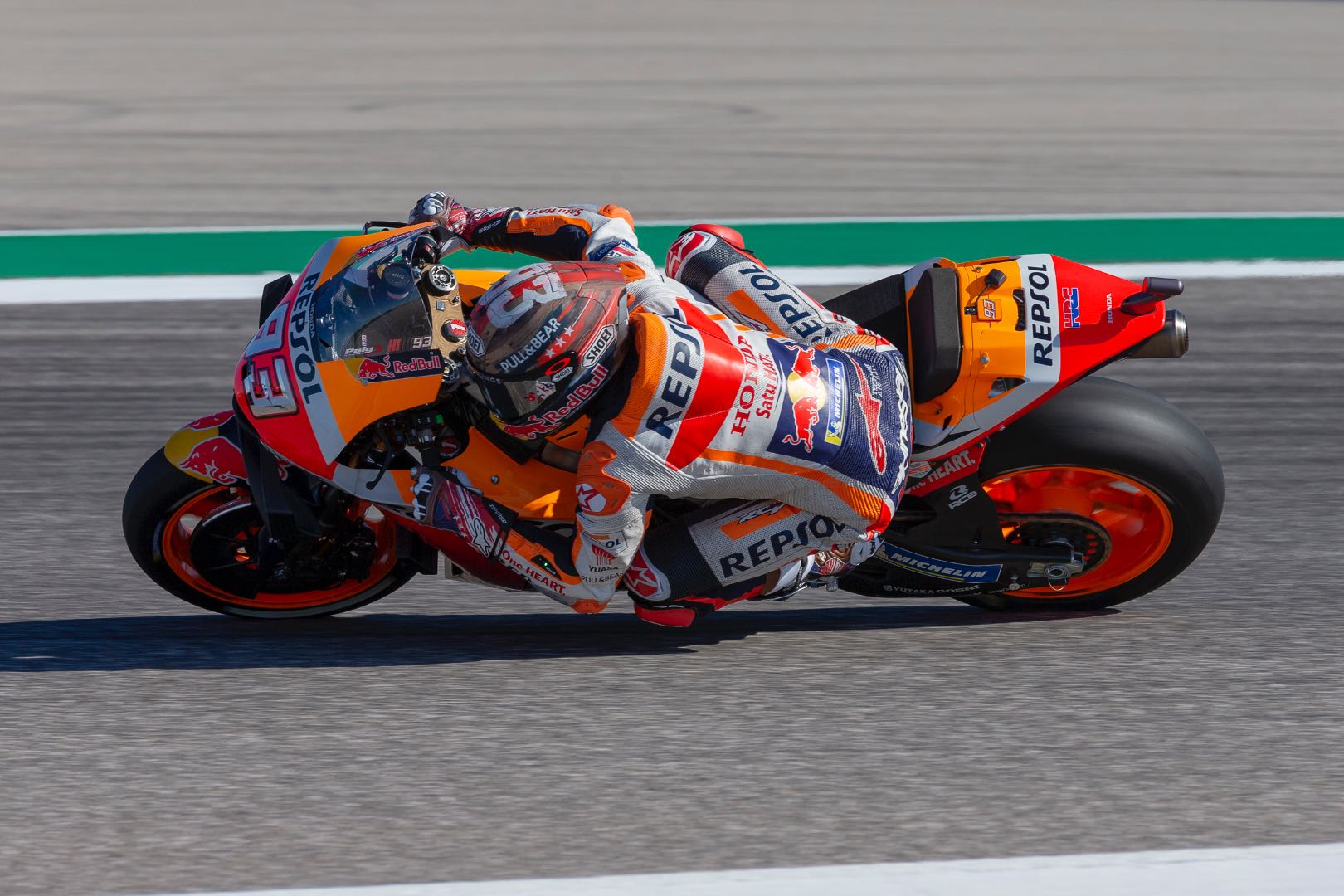 Marquez quickly got up to speed this year, claiming the pole Saturday by 0.273 of a second ahead of Monster Energy Yamaha’s Valentino Rossi.The Honda RC213V pilot began the 20-lap race at the 3.43-mile F1 circuit strong, leading through turn one with heavy charges by Rossi, LCR Honda’s Cal Crutchlow Pramac Racing Ducati’s Jack Miller and Team Suzuki Excstar’s Alex Rins.Marquez rode practically flawlessly as he gapped the field, looking to have his seventh-straight victory with ease. But he made a major mistake at turn 12 of lap nine – a tight left after COTA’s long-back straight where speeds are well over 200 mph. Marquez crashed, and slide off the track. He attempted to restart his bike but couldn’t, and his day ended with a DNF. 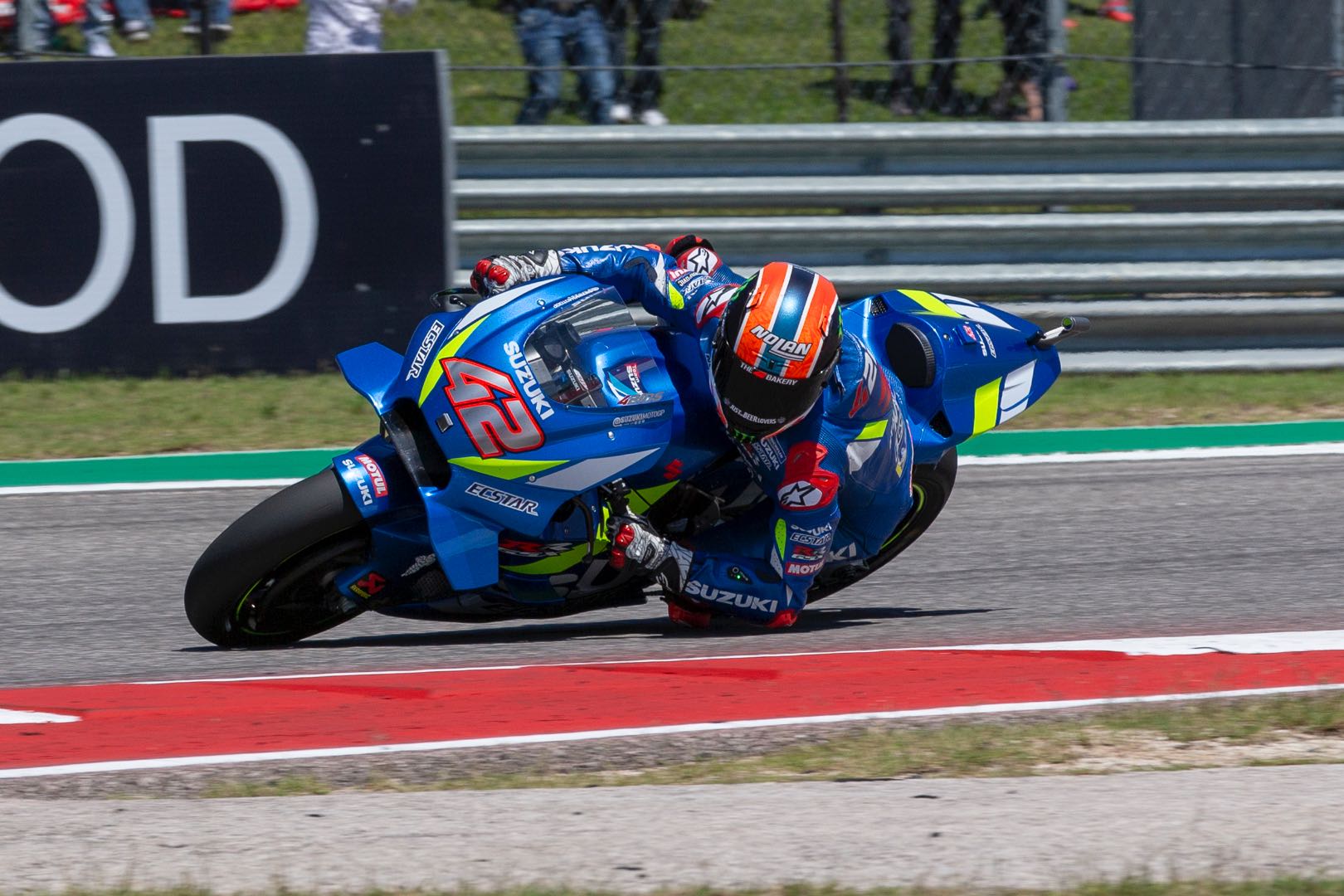 Rossi became leader with Rins chasing closely behind. Rins challenged multiple times, and made a pass stick with four laps to go. From there the nine-time World Champion put in all he could but he simply could not catch the Spaniard and the quick GSX-RR.Rins claimed his first-ever MotoGP victory during his third year with the factory Suzuki team. He crossed the line by 0.462 of a second ahead of Rossi. Claiming the final podium position was Pramac Racing Ducati’s Jack Miller.“I can’t explain my emotions, they just are exploding,” Alex Rins said after delivering Suzuki its first MotoGP win since Silverstone 2016. “When I was behind Valentino, I was saying ‘come on Alex, you can ride – never loose your faith’. During the last few laps I was feeling good, but I made one mistake on turn 11 and could have lost. On the last lap I tried to focus and we did it.” 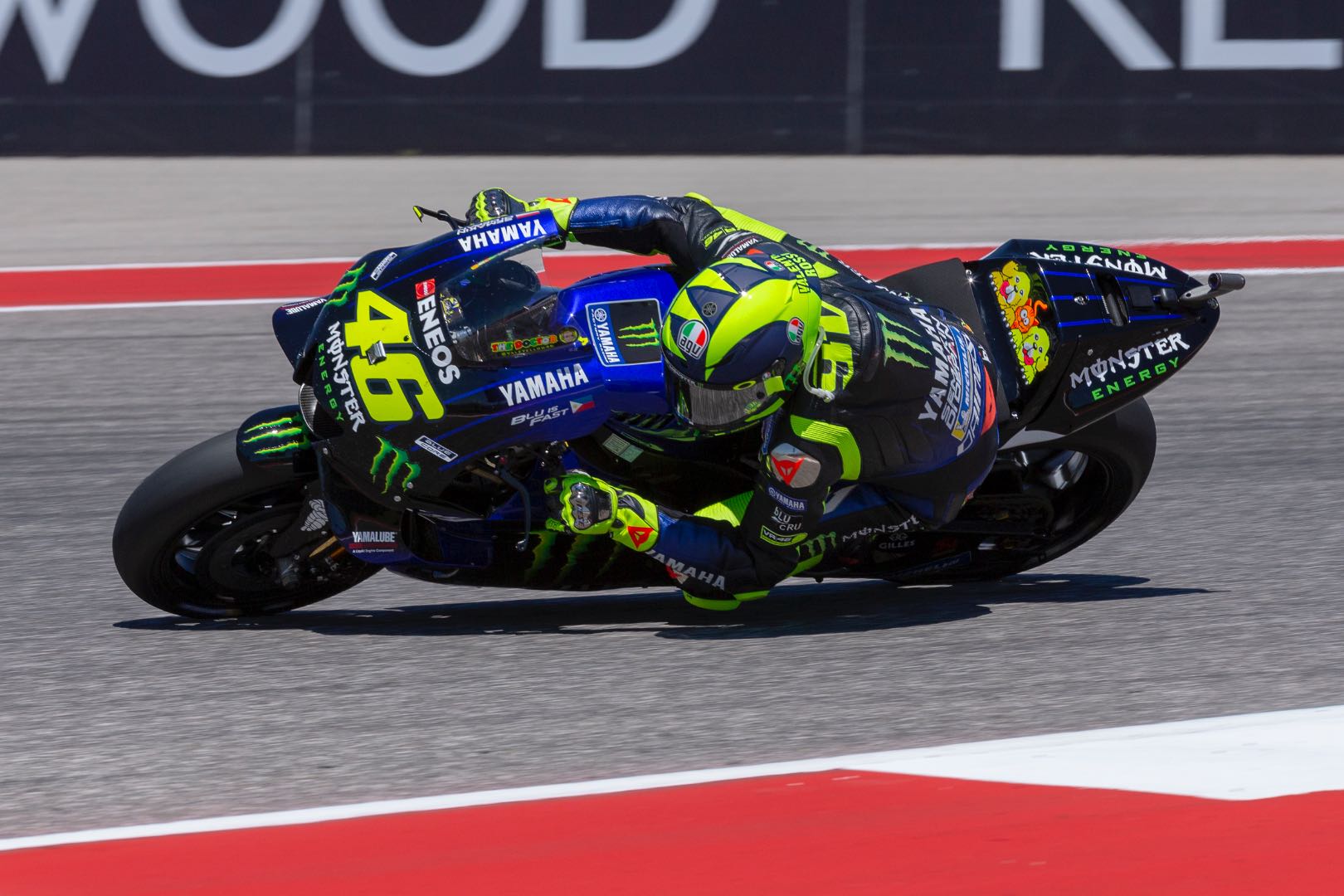 Three races in, and three different winners:Due to his fourth-place finish – after starting 13th – Dovizioso now leads the points battle with 54. The Italian Ducati GP19 pilot is three points ahead of Rossi, five ahead of Rins, and nine ahead of Marquez.The series now breaks for three weeks before round four of 19 at Circuito de Jerez in Spain.Photos by Ara AshjianFollowing is from the official MotoGP report of 2019 Austin MotoGP: 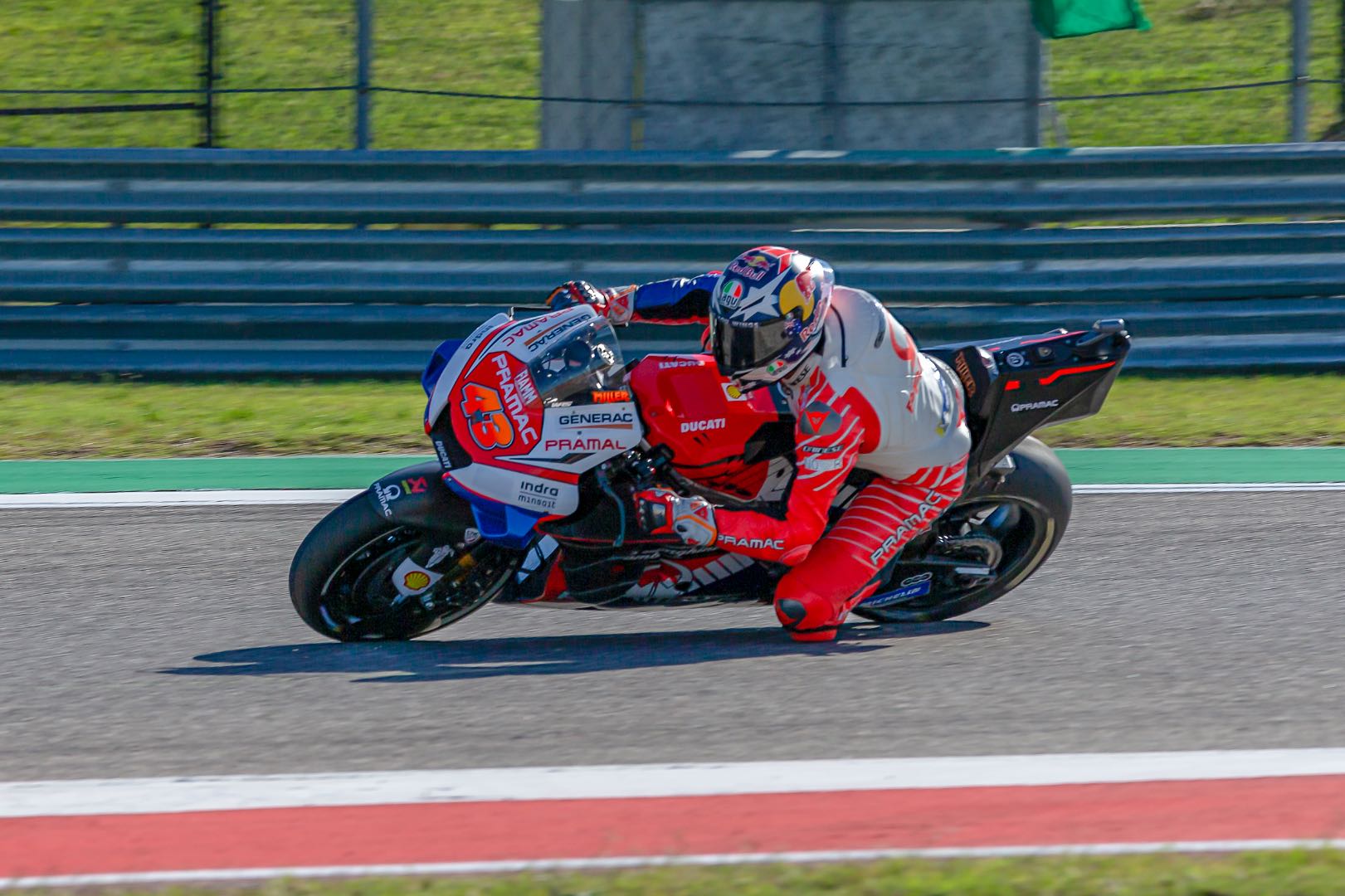 Marquez took the holeshot from pole and immediately set about trying to pull away, but Rossi was in hot pursuit with a small gap back to Cal Crutchlow (LCR Honda Castrol). Miller and Rins made for pretty close company too, but the initial big mover was a stunning start for Andrea Dovizioso (Mission Winnow Ducati) as he gained seven places from a P13 grid position. Then there was the first bout of drama as Joan Mir (Team Suzuki Ecstar) and Maverick Viñales (Monster Energy Yamaha MotoGP) were both given ride through penalties for jump starts – and Crutchlow then crashed out. That left Rossi with a bit of a gap in second, but Miller and Rins were on the chase.Suddenly, however, that fight for second became the fight for the win as there was a number 93 Repsol Honda on the floor. The reigning Champion and only man to have previously won in Texas slid out at Turn 12, tried to get back in the race but was ultimately unable to…leaving Rossi in the lead and Rins on the chase.The ‘Doctor’ held firm as the laps ticked on, but it seemed the Suzuki behind had something in his pocket. Closing in and closing in, with four laps to go Rins finally chose his moment and made his move – getting past well but Rossi quick to try and fight back to no avail. Then, again, the number 46 made a lunge for it on the next lap but this time headed well wide, that seeing Rins able to pull out a bit more breathing space as he settled back into the lead. 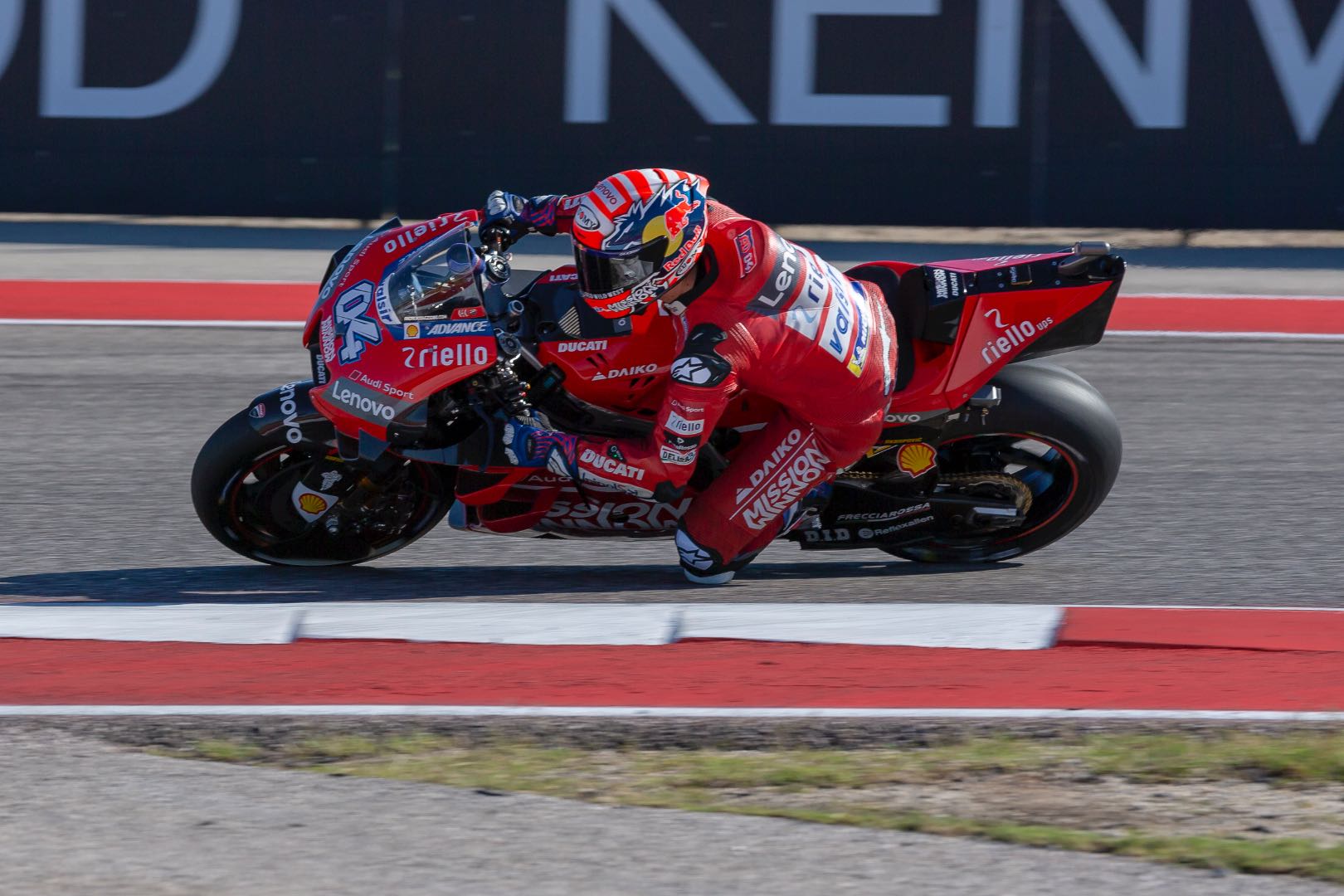 As it transpired, another move wouldn’t come but the ‘Doctor’ threw everything at it. Cutting the gap on the final lap there were bitten fingernails as the Jaws music echoed around the track and Rossi closed in, but Rins remained steadfast.With just enough margin in the final sector it all came down to holding his nerve and that he did, crossing the line just under half a second clear – becoming the first man to win in Moto3™, Moto2™ and MotoGP™ at the Circuit of the Americas where, incidentally, he took his first ever Grand Prix win in 2013.Rossi’s hard-pushed second place makes it twice in a row on the podium for him, though, and Miller’s visit to parc ferme is his first since his stunning debut premier class win at Assen in 2016. That’s also a key number for another two stats: it’s Suzuki’s first win since Silverstone 2016 and Rins made it the first time we’ve had a first time winner since that same season. 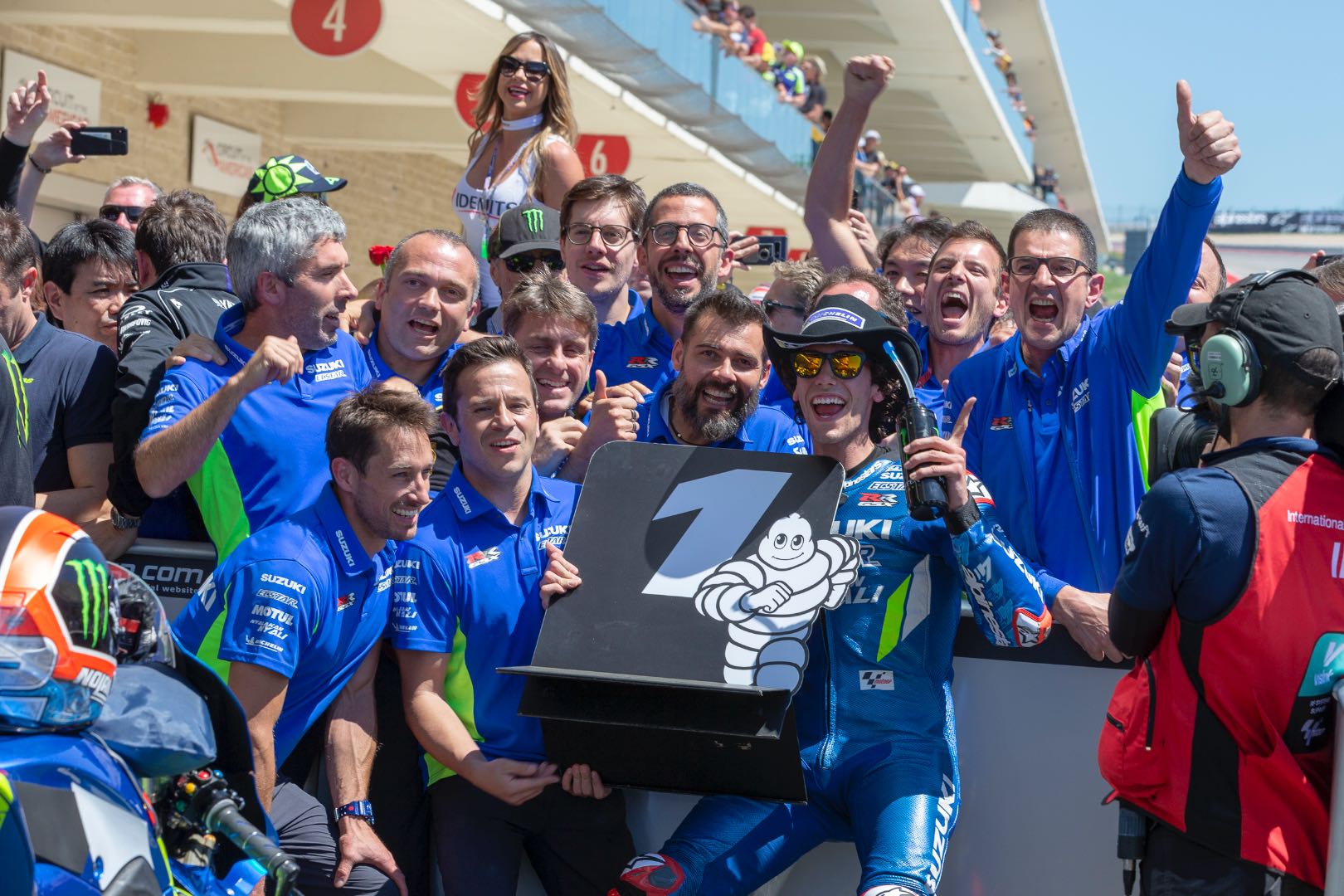 Behind that fight for the podium Dovizioso made good on his stellar start to limit some damage and take fourth, making the Qatar winner the new Championship leader. Franco Morbidelli (Petronas Yamaha SRT), who took on the number 04 initially, crossed the line in fifth for his best ever MotoGP™ result, ahead of Danilo Petrucci (Mission Winnow Ducati).Fabio Quartararo (Petronas Yamaha SRT) was top rookie once again as he took his best yet of a P7 – improving one position on Argentina – and he’s now well ahead in the fight for Rookie of the Year. Eighth place went to Pol Espargaro (Red Bull KTM Factory Racing) from his best ever KTM qualifying in P5, with Francesco Bagnaia (Pramac Racing) taking his best result in MotoGP™ so far in P9. Takaaki Nakagami (LCR Honda Idemitsu) rounded out the top ten as the sole finisher for Honda after a mechanical problem for Jorge Lorenzo (Repsol Honda Team).Viñales fought back to P11 after his ride through penalty, ahead of Andrea Iannone (Aprilia Racing Team Gresini), Johann Zarco (Red Bull KTM Factory Racing), Miguel Oliveira (Red Bull KTM Tech 3) and Tito Rabat (Reale Avintia Racing). 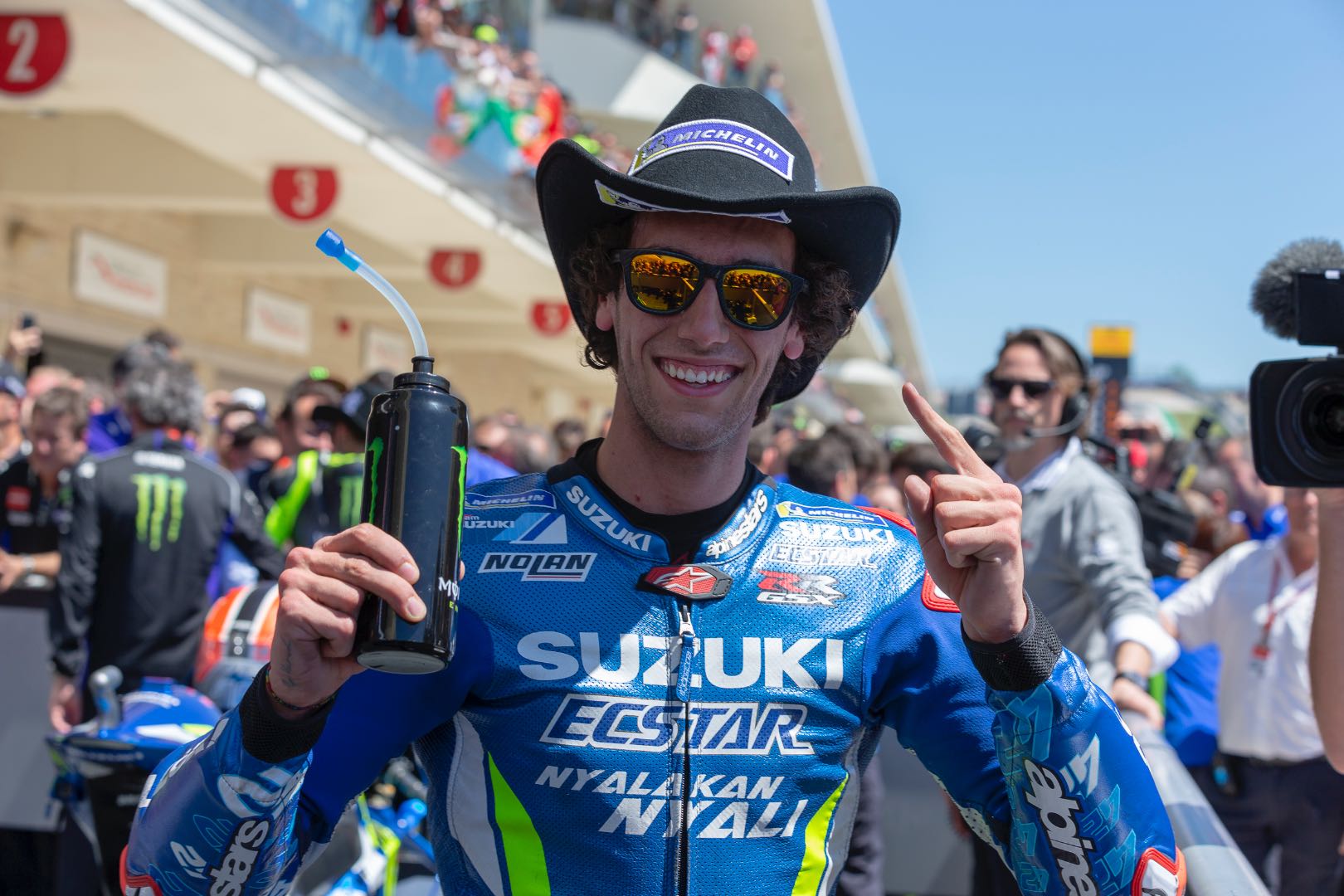