The 2019 factory Ducati squad has an entirely new look and feel thanks to a new initiative by Philip Morris International Inc. (PMI) called “Mission Winnow.”

PMI – the giant tobacco company that’s building its “future on smoke-free products that are a better choice than cigarette smoking” – says Mission Winnow is a campaign created to raise global awareness of PMI’s “passion and determination to constantly improve and evolve, as well as highlight the power of science, technology and innovation to build a better future.” 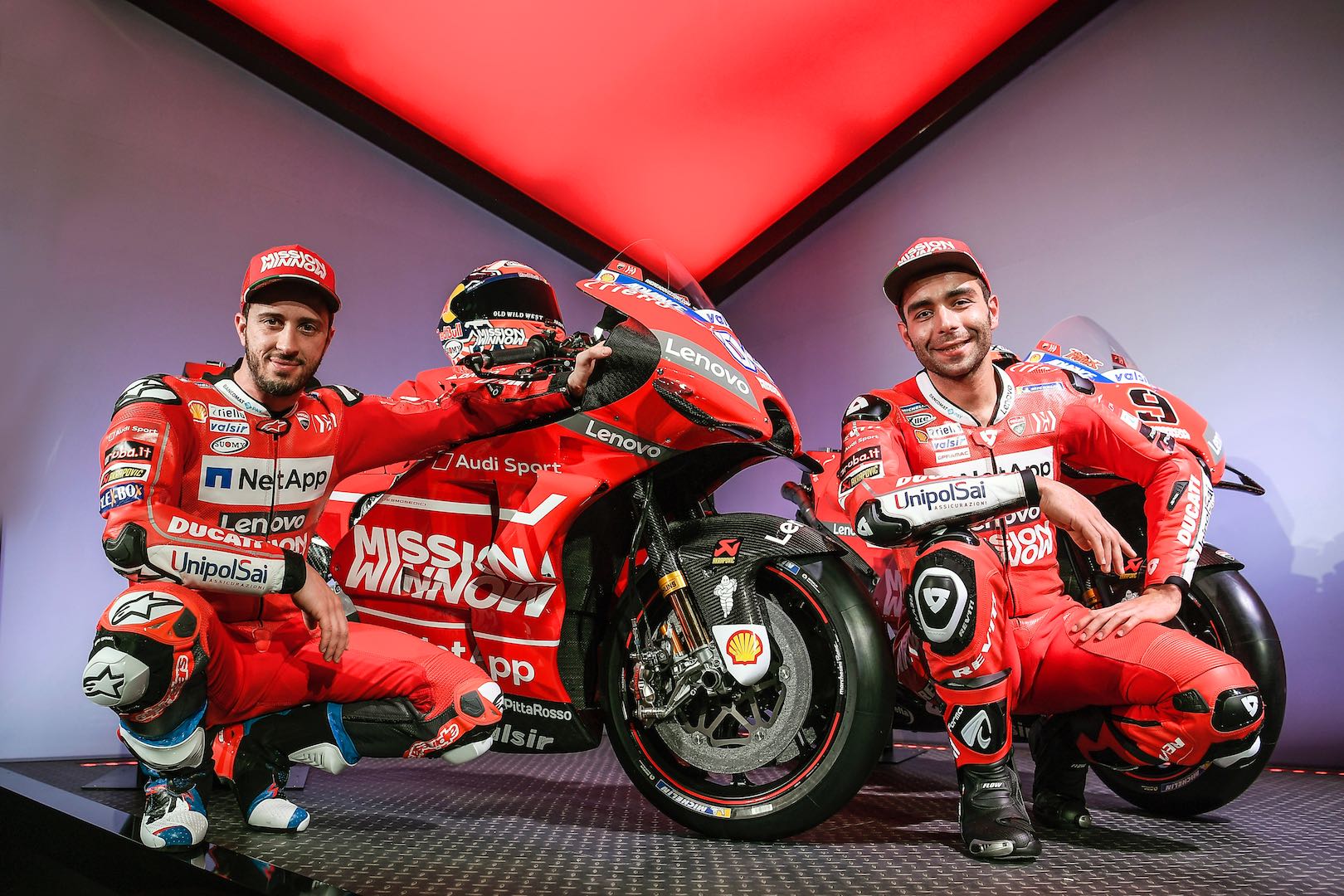 The Mission Winnow name first appeared on the Scuderia Ferrari team in Formula 1. And now it is the main name of the 2019 factory Ducati MotoGP team, which features Andrea Dovizioso and Danilo Petrucci.

The all-new Mission Winnow Ducati Team was unveiled this past weekend at the Cube, Philip Morris International’s Research and Development center in the lakeside Swiss town of Neuchâtel.

Riders Dovizios and Petrucci unveiled the 2019 Ducati GP19 prototypes in the new livery. This livery deliveries more of a message versus looks. The main sponsor for Ducati in 2019 is Audi Sport, though the Mission Willow name is much more prominent.

This ties into the meaning behind the Mission Winnow initiative:

“Ducati is one of the most inspiring and resilient brands in MotoGP, with a 70-year history in racing. The team’s determination to do better every race, to think unconventionally and to continuously push the boundaries of technology perfectly exemplify Mission Winnow.”

“Racing has always been part of Ducati’s DNA,” says Claudio Domenicali, Ducati Motor Holding CEO, says. “The solutions and expertise gathered on track represent an asset that is directly tied to our product line, and the MotoGP project is crucial for us to produce models that are more performing, exciting and safe to ride for all our passionate fans.

“Looking back at the results achieved in 2018 on track, we can be proud because our Desmosedici GP proved to be one of the most competitive bikes, but we cannot settle and we want to make another, decisive step forward.

“I believe our know-how and the spirit that characterizes the people of Ducati Corse are an extra value compared with our rivals. I want to take this occasion to thank all the partners that are supporting us in this new challenge in MotoGP – including Audi Sport, which starting from this season will be main sponsor – and to send my best wishes to the whole Mission Winnow Ducati team for an unforgettable season.”

Ducati has secured one MotoGP title – 2007, the year Casey Stoner claimed it after winning 10 races that season. Stoner was a brand ambassador and official tester for Ducati, but the two parted ways last November. 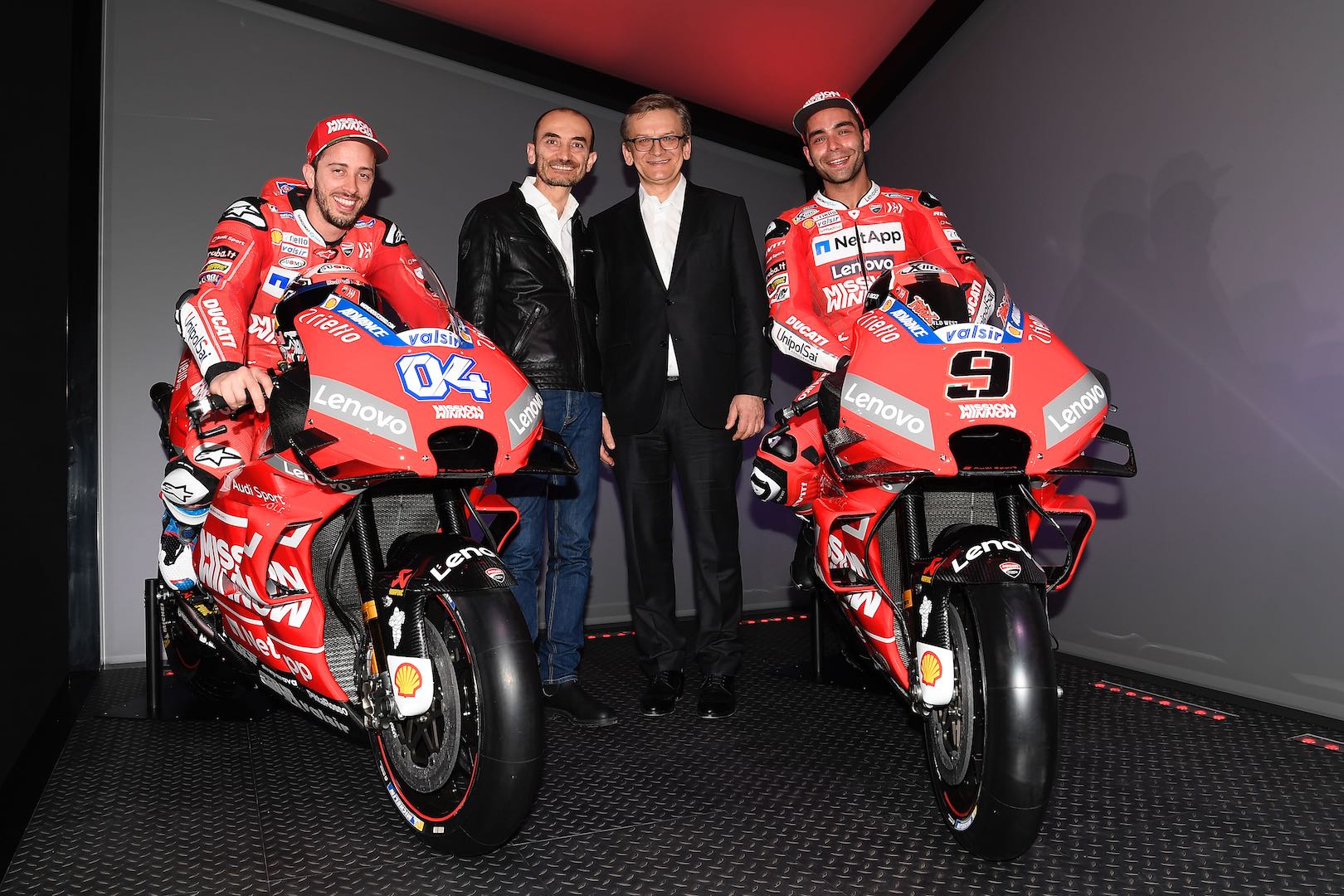 This year the team returns with Dovizioso, who finished runner-up in MotoGP for the past two seasons. He will be joined by Petrucci, the Italian who has competed on satellite Ducatis since 2015.

“2018 was another important season for us in MotoGP, one that saw us grow and improve again – both from a technical and a sporting point of view – for the fourth consecutive season,” says Luigi Dall’Igna, Ducati Corse General Manager.

“We were very competitive even on tracks that have traditionally been more difficult for us, and we achieved more victories and podiums overall compared with 2017. However, our direct competitors have also improved. We must do better and improve more than what we have done in recent years, bringing new ideas and evolutions to cover all the possible areas.

“With Andrea and Danilo, we’re confident we have the right team to optimize the resources for the development of the bike. Our goals must be ambitious, as always, and we want to bring the MotoGP title back to Borgo Panigale.”

Andrea Dovizioso (#04, Mission Winnow Ducati) says: “2018 was a very positive year for me. We started with a victory and, even if we had some ups and downs, the difficulties pushed us to look in new directions and half-way through the season we made a big step forward.

“I’m very happy with the work done with the team, we fought for the win basically throughout the second half of the championship and I think we’ll make more improvements in the next tests to begin the season in the best possible way.

“The expectations are high, I have a great feeling with both the bike and my crew, and we can count on more experience. I’m happy to have Danilo alongside me in the garage, we know each other well and I believe we can fight on track but also work together to develop the package.” 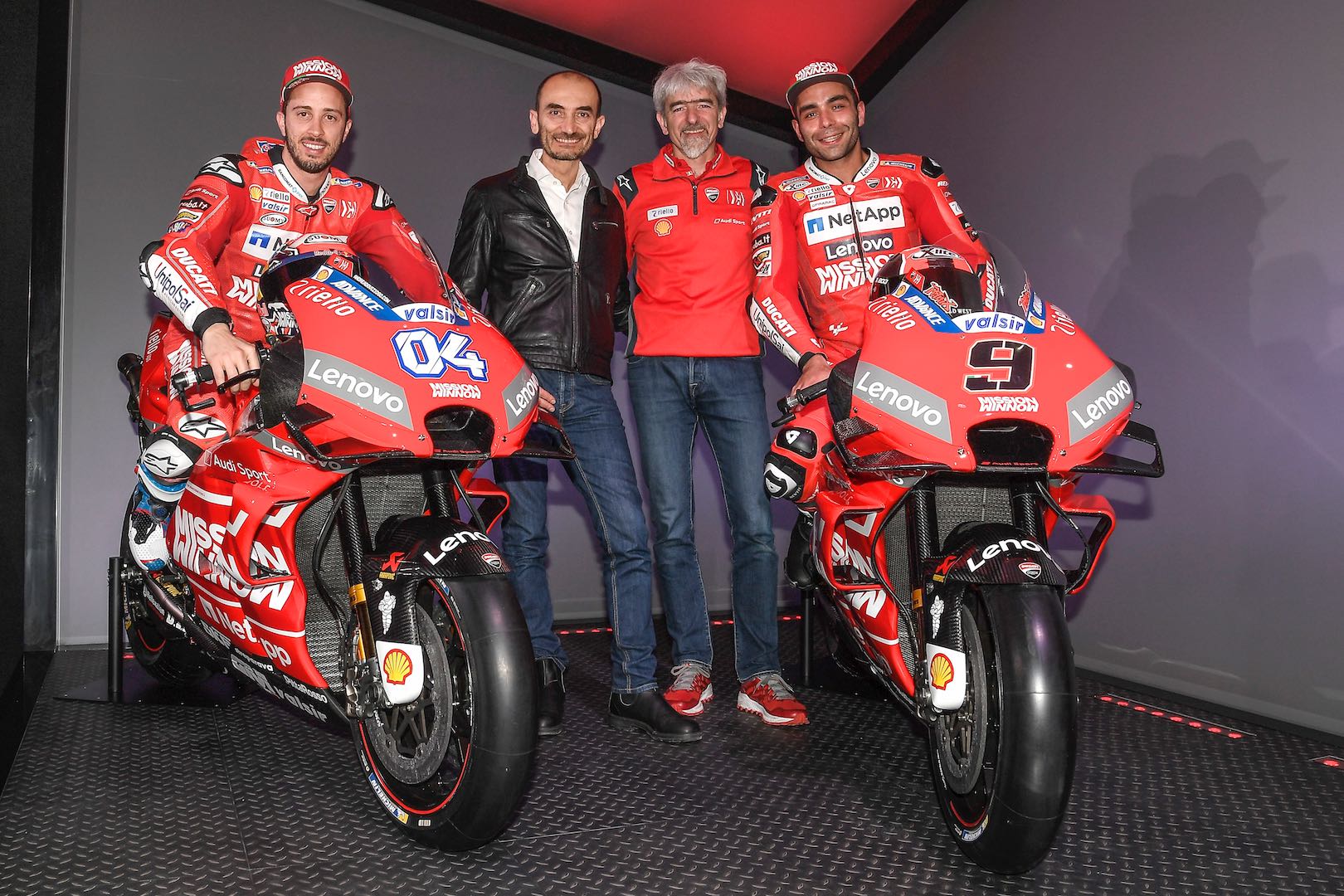 Danilo Petrucci (#9, Mission Winnow Ducati): “Last season was very important for me, my best ever in terms of points scored. Even if I barely missed my goal to finish first among independent riders, I still finished 2018 on an undoubtedly positive note.

“Racing with the factory colors makes me really proud and I can’t wait to get started: I have a great feeling with my new crew, and the technical level is higher than ever. As for me, I know where I can still improve and I changed my conditioning program to make sure I’ll be in my best shape ever come the first race.

“I’m very happy to pair with Andrea: not only is he a phenomenal rider, but also a wonderful person. We’ve known each other for a long time, and we started to train together with one goal: to both have a really strong season.”

The Mission Winnow Ducati team heads to Sepang in Malaysia February 6-9 for the first pre-season test.