With an aggressive first lap and blistering finishing laps at the Twin Ring Motegi, Marc Márquez won his fifth MotoGP World Championship in six years.It was a dramatic finish, as Andrea Dovizioso crashed on the penultimate lap while battling with Márquez in an attempt to deprive Márquez of clinching the championship at the Motul Grand Prix of Japan.LCR Honda’s Cal Crutchlow and Team Suzuki Ecstar’s Alex Rins joined Márquez on the podium of the 24-lap race.1. Although Márquez started sixth on the grid, he had worked his way up to second place before the first lap was complete. Márquez (Repsol Team Honda) swept under first-row qualifiers Johann Zarco (Monster Yamaha Tech 3) and Jack Miller (Alma Pramac Racing Ducati) when Zarco and Miller came together in the first corner. That left Márquez behind pole sitter Andrea Dovizioso (Ducati Team) when the crossed the finish line for the first time.2. Dovizioso managed the race from the lead by slowing the pace. With Dovi conserving tires—he had a soft front Michelin—Márquez and Crutchlow remained close for most of the race. The slower pace allowed Valentino Rossi (Movistar Yamaha MotoGP) to stay in podium contention early in the race as Miller faded early. Miller went on to crash out on lap 11 while running in seventh place. 3. On lap 5, Crutchlow passed Márquez for second place as Rossi closed, and Crutchlow held it for two laps. Crutchlow made a clean move on Márquez to take second, and two laps later Márquez returned the favor. 4. Rossi held fourth place for laps 5 through 9 before being overtaken by a surging Team Suzuki Ecstar pair—Andrea Iannone and Alex Rins. Iannone and Rins were charging up to the slow-moving three-rider front pack, leaving Rossi behind. However, Iannone lost the front end when entering a right-hand corner wide on lap 15, handing fourth place to Rins.5. At the midway point, Crutchlow began slowly fading in third place. On lap 16, leader Dovizioso and Márquez began dropping into the 1:45s, while Crutchlow remained in the 1:46s. This turned the Motul Grand Prix of Japan into a two-rider race between the top two protagonists in 2018. Crutchlow was over a second down by lap 18 and was no longer a factor in the victory battle. He did have to contend with Rins for the rest of the race, beating Rins by just 0.147 seconds at the finish line.6. With Márquez’ championship-clinching at stake—he had to beat Dovizioso to seal the title with three races remaining—Márquez moved decisively into the lead on lap 21. On lap 21, Márquez bested Dovizioso by 0.345 seconds to take a slim lead over the finish line. Dovizioso responded the following lap, shaving Márquez lead to less than a tenth of a second. 7. Márquez fired off one of his fastest laps of the race on lap 23—a 1:45.866—forcing Dovizioso into a mistake. Dovizioso asked too much of his front end in a right-hander, and the soft-compound tire gave way with Márquez ahead. Márquez continued riding at 100 percent until his pit board and dash readout alerted him that Dovizioso was out of the race. Márquez shook his head in recognition that he was going to win the championship, and cruised the final lap to the win.
8. While celebrating his win in front of the fans, Márquez over-exhorted and dislocated his shoulder. Yes, really, according to MotoGP.com. After he dismounted his Honda RC213V on the track, he laid down on the tarmac briefly. When he removed his helmet, there was a look of distress on his face. Now we know why.9. Marquez’ fifth MotoGP title ties him with Mick Doohan for third in premier-class championships. Only Rossi (seven championships) and Giacomo Agostini (eight championships) have more premier-class titles than 25-year-old Márquez. Doohan was 33 when he won his fifth premier-class championship. With titles in the lightweight (125) and middleweight (Moto2) classes, Márquez has seven Grand Prix titles to his credit.10. Crutchlow was on the podium for the first time since Misano, while Rins’ podium was his first since Assen. Márquez is on a three-win run, while Rossi has finished fourth in consecutive races. With Dovizioso scoring no points—he remounted to finish 18th—Rossi is just nine points behind Dovizioso for second place in the standings with three rounds to go. With his podium, Crutchlow is seven points behind Maverick Viñales (Movistar Yamaha MotoGP) in a battle for fourth place in the championship. Injured Jorge Lorenzo (Ducati Team) drops to eighth place in the standings, as he was passed by Zarco (sixth place) and Danilo Petrucci (eighth place, Alma Pramac Racing). Zarco and Petrucci are deadlocked for sixth place in the championship standings with 133 points each. 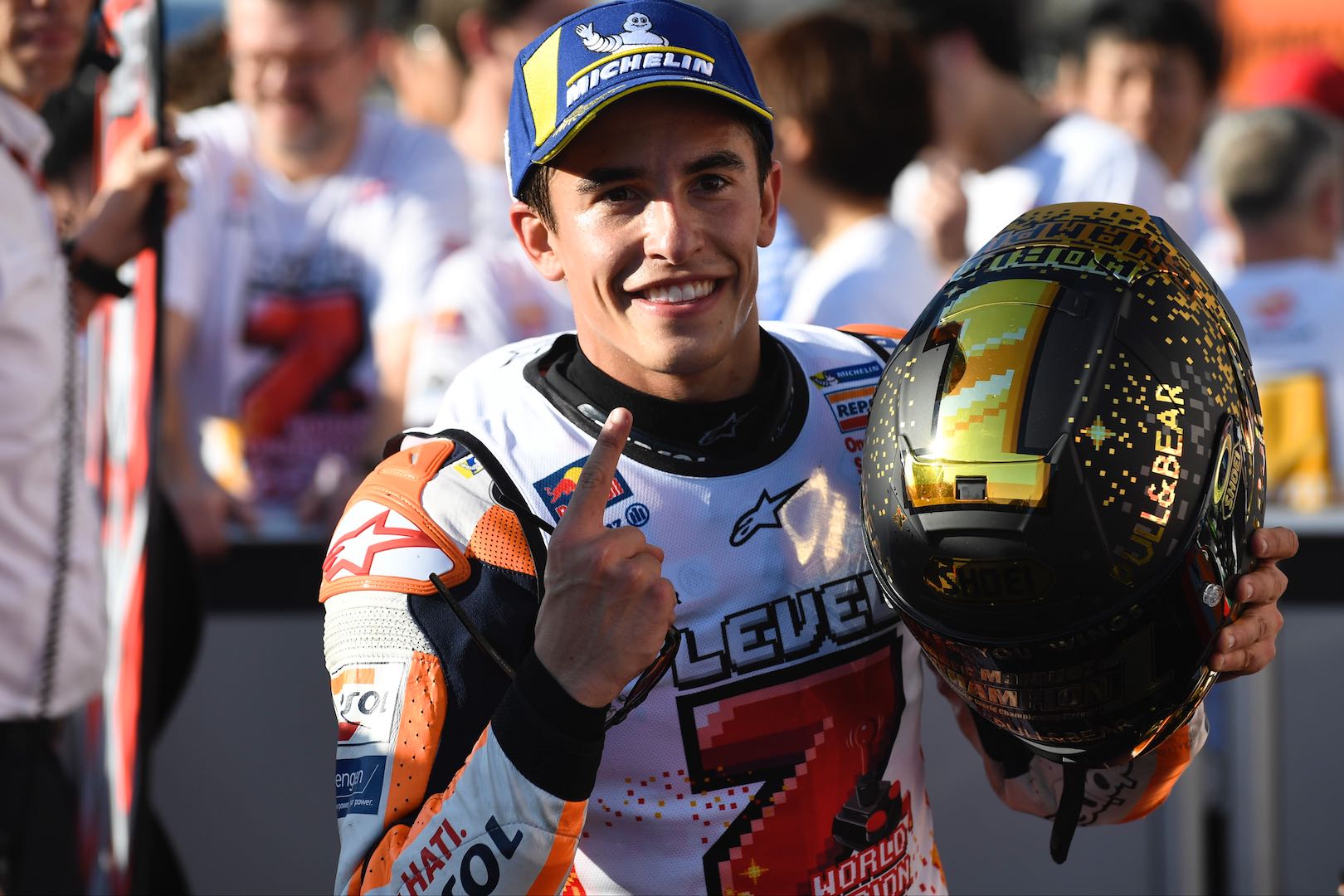