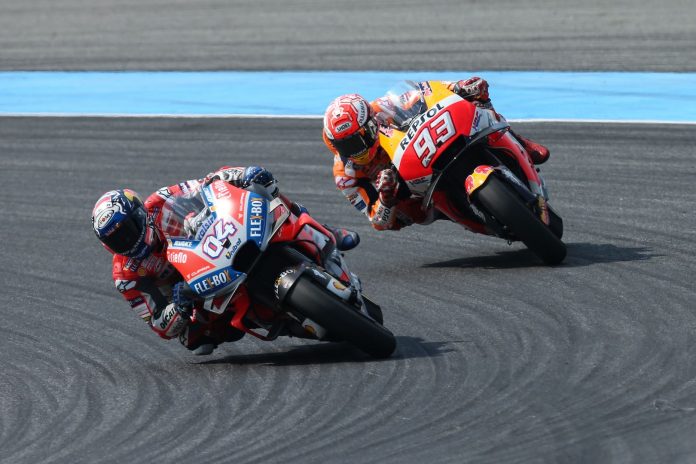 When qualifying wrapped up for the inaugural Thailand Grand Prix at Buriram International Circuit, Repsol Honda’s Marc Marquez claimed his fifth pole of the season.But it wasn’t a runaway pole. The current points leader qualified a mere 0.011 of a second ahead of Movistar Yamaha MotoGP’s Valentino Rossi, and 0.139 ahead Ducati Team’s Andrea Dovizioso.The results were expected to be tight in Sunday’s Grand Prix, these expectations proved true for the podium finishers.

Just as he dominated qualifying, Marquez also dominated Sunday’s 26-lap MotoGP. The 25-year-old Spaniard earned his seventh win of the season, and made history as the first MotoGP rider to win in Thailand.Joining Marquez on the podium was his main rival, Dovizioso, and Movistar Yamaha MotoGP’s Maverick Vinales. Dovizioso finished 0.115 of a second behind, and Vinales 0.270 behind.This was Marquez’s 69th premier-class win of his career, and he is now equal with Jorge Lorenzo for the fifth most-winning rider across all classes. Speaking of Ducati Team’s Lorenzo, he didn’t start due to a hectic crash in the second free practice session that upset some injuries he sustained two weeks ago in Aragon. 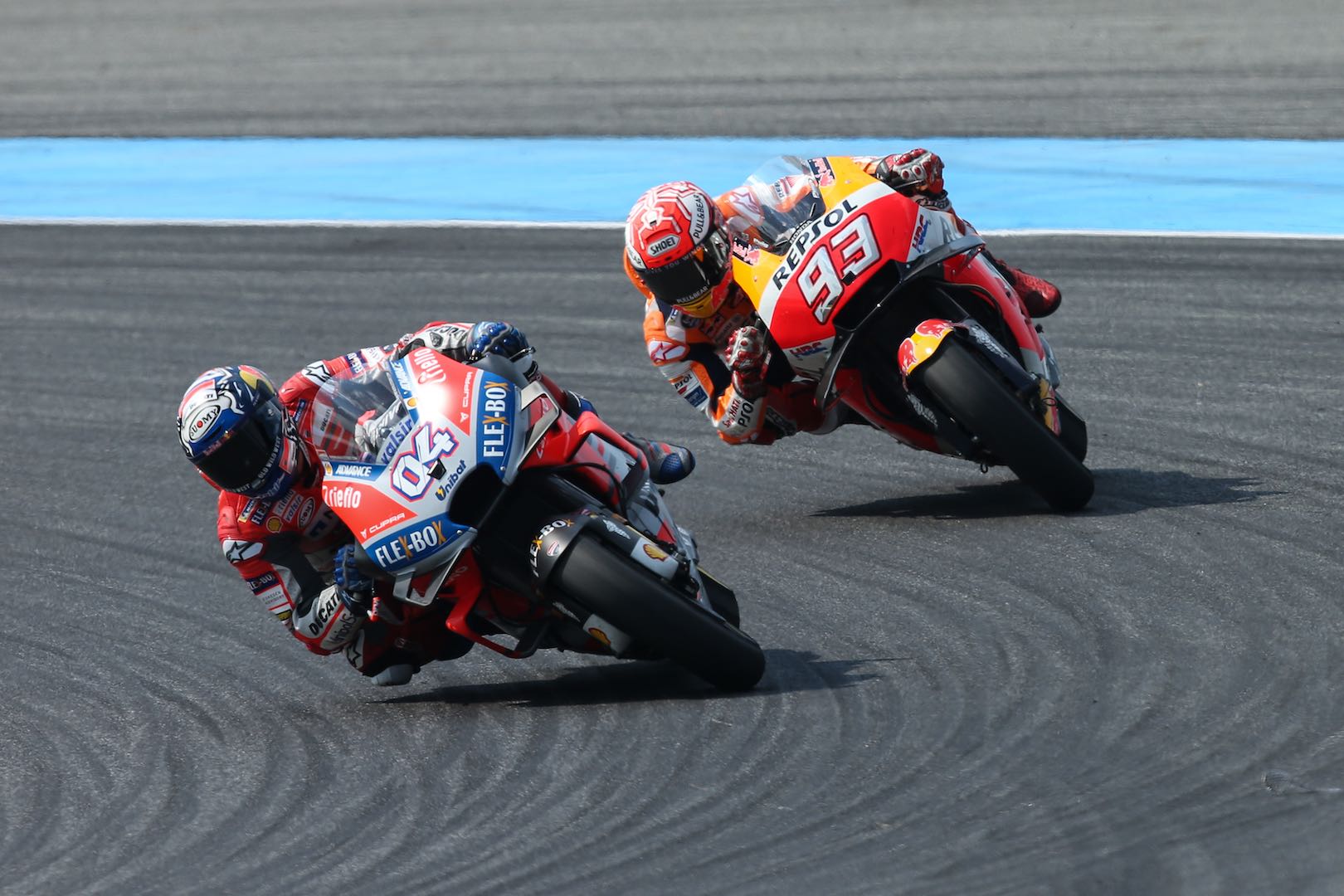 Following his win, Marc Marquez said: “Of course I’m very, very happy today because it’s the first time I’ve beaten Dovi in this way. We were very equal, and my strategy was to try and attack in order to open a gap and avoid having it come down to the last lap.“But Dovi had a very good pace and I was struggling with the front tyre, so I wasn’t able. Instead, I just tried to manage the tires and stick to him. Honestly, I wasn’t so confident going into the final lap because I’ve lost many head-to-head finishes with him in the past.“But this time, we swapped roles—I used Dovi’s style and Dovi used Marquez’s style!—and that worked to overtake him on the corner exit. It was a great feeling to race in front of all the Thai fans, who cheered and supported all of us riders equally, really enjoying the sport and making me feel good over the whole weekend. I’m really thankful to them. Now the first match ball will be in Japan, which is the most important race for Honda as it’s their only home Grand Prix. Of course we’ll try our best there, but if it’s not possible, the main target is still to achieve the title at some point.” 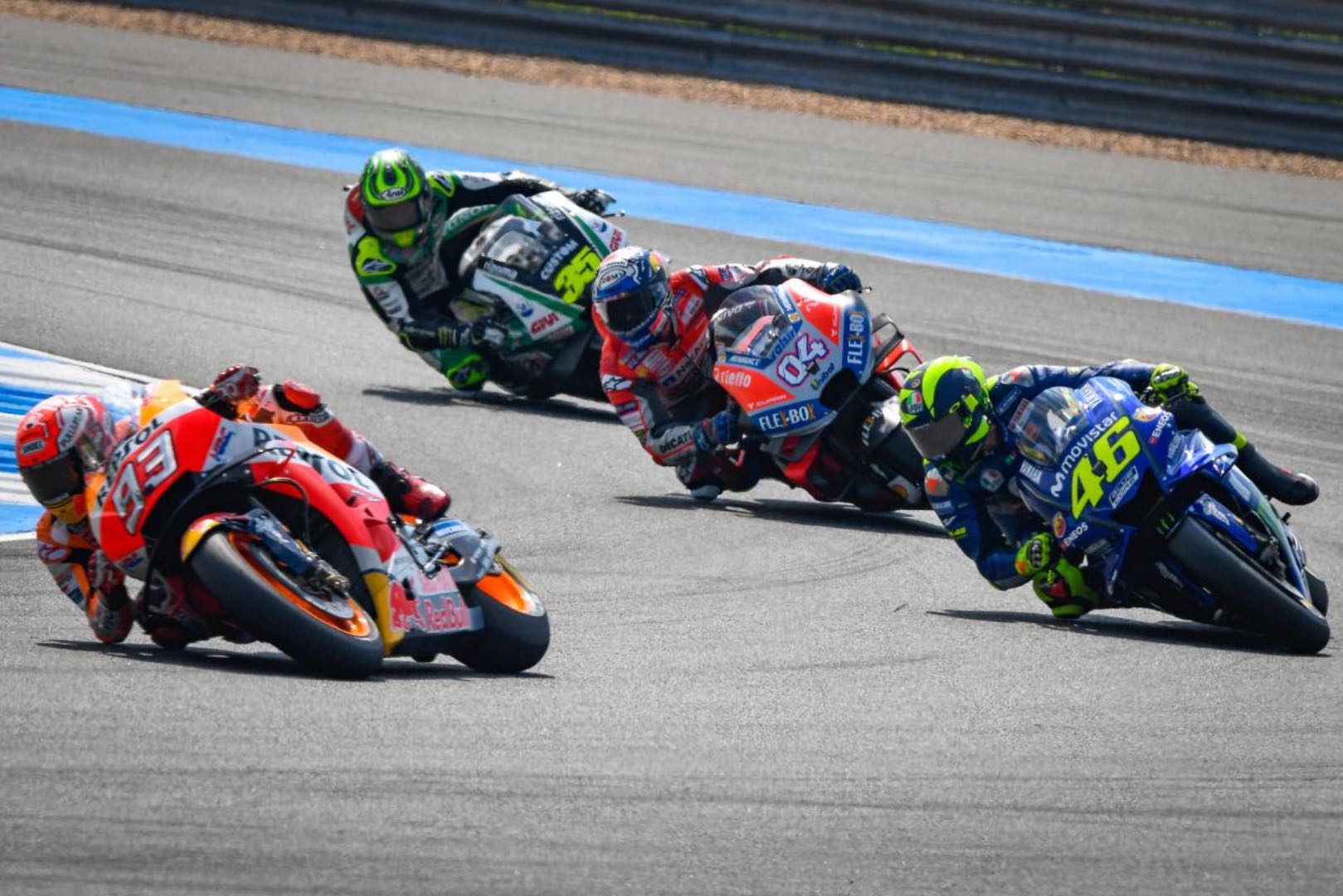 After 15 of 19 rounds, Marquez now has 271 points – 77 ahead of Dovizioso and 99 ahead of Rossi. Due to his points leads, Marquez can possibly clinch the 2018 MotoGP title two weeks from now at Motegi.Finishing fourth in Thailand was Rossi, who was followed by Monster Yamaha Tech3’s Johann Zarco and Team Suzuki Ecstar’s Alex Rins.Rounding out the top 10 were LCR Honda’s Cal Crutchlow, Angel Nieto Ducati’s Alvaro Bautista, and Alma Pramac Ducati’s Danilo Petrucci and Jack Miller.

MotoGP Point Standings (after 15 of 19 rounds)