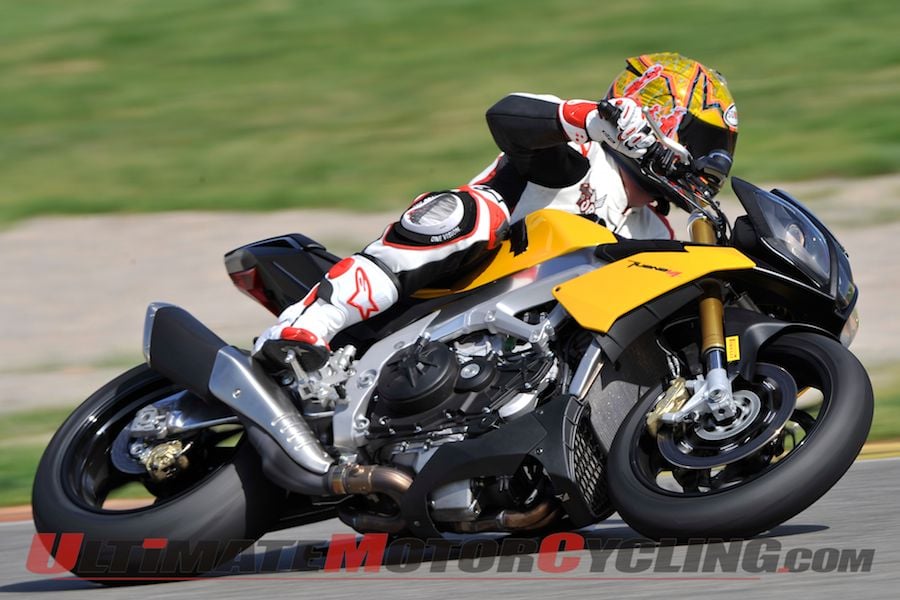 Let’s take a look back at one of our favorite nakeds – the Aprilia Tuono. Here’s a review from the 2011 archives. For a test of the latest Tuono, visit 2017 Aprilia Tuono RR & Factory Review.It’s a sunny morning in Valencia, and I’m at the Ricardo Tormo circuit sipping a coffee while listening to 20 roaring, V4-powered Aprilia Tuono’s being warmed up in the pit-lane.One of the 2011 Aprilia Tuono V4R APRC motorcycles is all mine for the day with a dedicated mechanic. I’m a motorcycle journalist but here I’m being treated as a MotoGP star. It’s about 8:45 in the morning and I head to the cloakroom to jump into my leather suit, ready for action at 9 a.m. 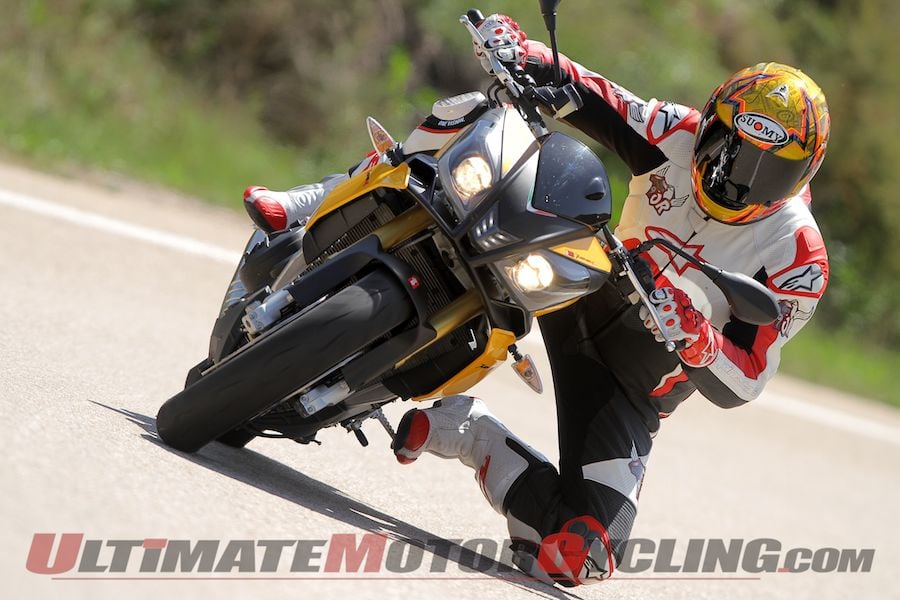 I start my first session with the traction control set at level six and then reduce by one for each lap until I’m down at level one. The 2011 Aprilia Tuono V4 R is a bit of a shock to the system as it just pulls like an angry bull everywhere and stops as if a freight train suddenly started pulling it in reverse.When I’ve finished my second 20-minute session, I’m experiencing arm pump and a threatening cramp in my left leg each time I brake hard. I tell my mechanic and he adjusts the rear suspension with more preload to stop the bike moving so much during hard braking and also turn in faster.This changed the bike a lot and made my hard riding much easier. The Aprilia V4 taken directly from the RSV4 R superbike suits the Tuono perfect with an absolute abundance in power and torque. Aprilia have only de-tuned it slightly and the Tuono is only 13 horsepower short of the RSV4 R.The Tuono is hard physical work when it hits the higher revs as I really have to push myself forward to avoid hanging after the bike by the handlebar. The Tuono munches up all the short straights at the Ricardo Tormo circuit like nothing else and quickly it seems the whole circuit is a succession of corners with one long start/finish straight.With the APRC (Aprilia Performance Ride Control) traction control I can accelerate early from great lean in safety and even on level one it feels safe despite some nice sliding action out of most corners.The only place on the Valencia circuit where there’s some room for relaxation is down the straight but even here the enormous power and the wind pushes you back until it’s time for hard braking whilst shifting down the box.Later in the day I preferred to short shift up the quick shifter more to save my arms from the strain, it hardly felt like I was going any slower. The three lower gears on the Tuono are lower than on the RSV4 R and it can be felt! Due to that great quick shifter I also made my way all the way up to sixth several times down the straight. The slipper clutch is equally good when shifting hard down to second ahead of the fast left hander at the end of the straight. Then it’s all full throttle and sliding and a little wheelie all over again. I liked the Tuono immediately but now I start to like the circuit more as well as I’ve figured out how to relax a little bit more between the corners.The Aprilia Tuono V4 R aprc we ride at the circuit has been fitted with the 200/55-ZR17 Pirelli Diablo Corsa rear tyre and aftermarket clutch and brake levers which makes it even better than the standard I’m later riding on the road.The 200 section rear tire just offers so much grip but still the brutal Tuono makes mincemeat of that too given half a chance. Lean angles are absolutely of superbike standard and there’s not much about this bike apart from the wide handlebars and the lack of a fairing that resembles a streetfighter.The one and only bike I can imagine being able to compete morally is the Ducati Streetfighter and that has 17 horsepower less. The MV Agusta Brutale is too soft compared to this. The Tuono V4 R is going to conquer the world and I can’t quite see what could stop it. A naked Desmosedici perhaps but Ducati haven’t got any such plans yet.

Despite going as fast as I could or dared the Aprilia Tuono V4 R aprc just stays composed and it’s incredibly safe on the circuit. I can’t imagine ever making bad mistakes on this bike as it forgives you the rider with pitty and just spits back “can’t you ride me any faster than that?”The Tuono is the choice of those of us that likes to ride fast on both the road and the track and nobody will ever find this bike boring. It’s testosterone on two wheels and you should pronounce testosterone like you say Toblerone in an Italian accent.I have never ridden any naked that feels as stable or as suited to a race track as the Tuono V4R aprc. As soon as the revs climb towards 10K rpm there’s a high tech roaring MotoGP style mighty V4 sound exiting the exhaust. The rev limiter has been set to 12,300 rpm which allows for 800 rpm of overrev if needed.If you like I have tried the RSV4 superbike you’ll be surprised by how mighty the Tuono mid-range from around 7,000 rpm is. The lower gearing in the three lower gears just amplifies the arm wrenching acceleration and fair enough that new tall and wide handlebar allows for a relaxing ride on the road perhaps but on the circuit that V4 engine makes sure you still get your arm exercise.Truth be told I was never bored enough to start pulling big wheelies on the circuit. The Tuono V4 R aprc has everything the RSV4 Factory aprc SE has got so that includes wheelie control allowing smooth landings. 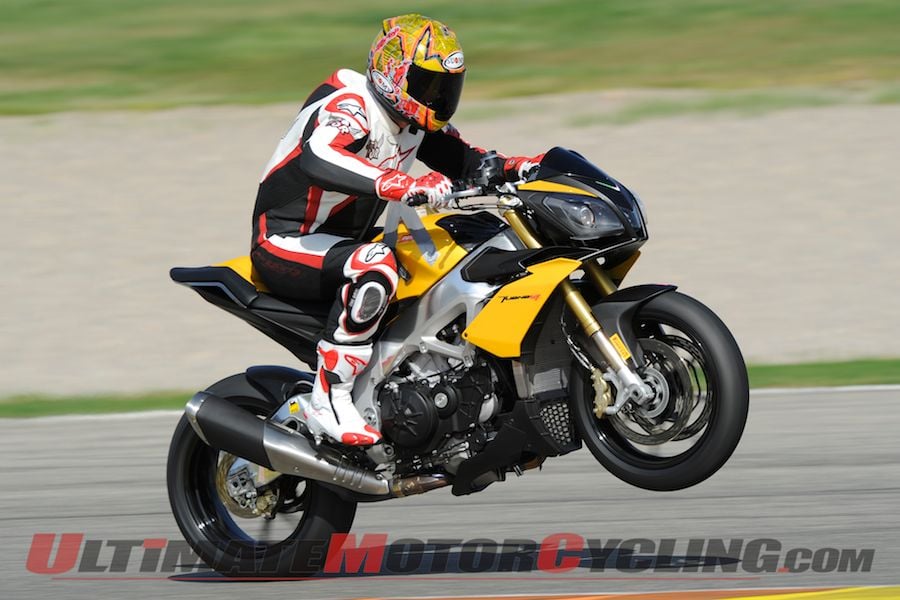 Out on the road however I fine-tuned the wheelies and it’s not the easiest bike in the world to do so on due to the ride-by-wire and sudden explosion of power but I got her rained down in the end. I had some fun on the motorway by pulling it up by pure power in second gear at anything between 100-130km/h and just continued as far as I wanted or the revs would allow. The Tuono is definitely a big wheelie bike. Traction control must be off or you’ll be disappointed as the system quickly brings you back to earth. The traction control works by pushing the + or – button on the left side of the handlebar whilst on the move.In the afternoon I got to sample all this on the roads surrounding the Ricardo Tormo Valencia racetrack and now it’s a different story.While I stayed in Track mode for all my laps around the circuit I now found myself on a standard Tuono V4 R APRC with the 190/55 rear tire, standard levers and the traction control set to a higher level and riding mode Sport which reduces the torque in lower gears.I played around with the traction control where I found level three to be really good for our riding in the mountains. It adds a safe level of traction control and we never as I hardly ever come close to using the very edges of the tires on the road ride. Later I changed to setting one for some wheelie fun and also off.Riding hard in the corners with traction control set to level one might not be sufficient to save a situation involving gravel and oil so I needed more traction control for a relatively safe ride. The one and only thing the APRC suite doesn’t cater for yet are ABS brakes. 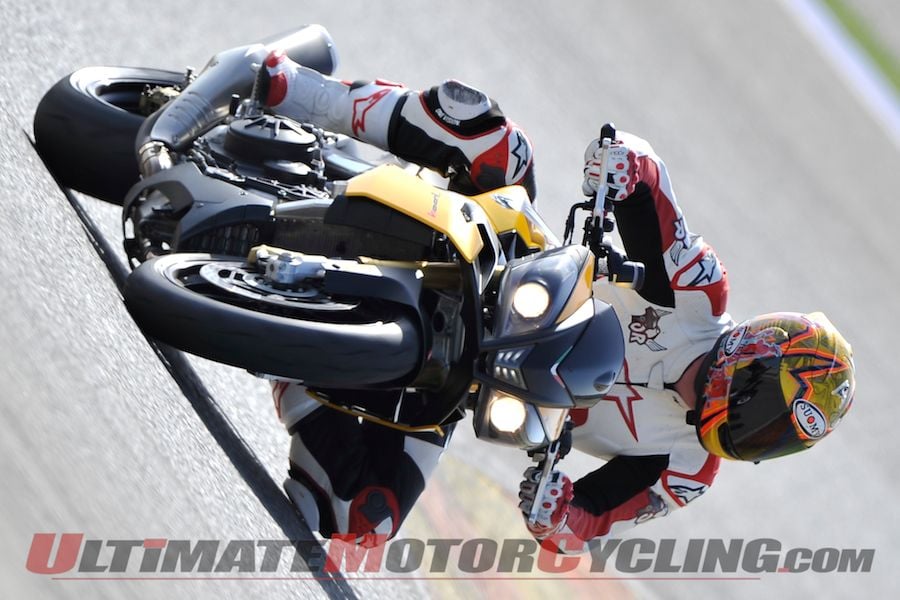 There’s no ABS brakes available yet for this bike from Aprilia but reliable sources keep telling us that Aprilia will launch something very good to the racing ABS segment soon. I had a couple of moments on the brakes because we never reached fast enough speeds to make brakes and tires work as well on the road as on the circuit. The Tuono V4R aprc is a bit of a handful on the road and it’s better to be safe than sorry so I recommend people to use the traction control wisely.The seat is hard and not very comfortable so it didn’t take too many miles before I felt a bit wooden in my seat muscles. The Tuono is that type of compromise though but it is miles more comfortable than the RSV4 R superbike must be said. The Tuono V4R is the roadbike for the rider that would otherwise ride a supersport but with a more upright riding position. Because I tell you the power and the handling is there.ConclusionThe 2011 Aprilia Tuono V4R APRC is possibly the most extreme streetfighter type streetbike ever made. Aprilia have upped the ante by a large measure. I don’t often feel so good about a new motorcycle I have ridden and this one never fails to impress.The V4 engine with its 167.3 horsepower and 111.5Nm is one of the best in the business. The handling is also of the best in the business and add to this a twist to the Carlsberg slogan; “probably the fastest” if they only built motorcycles. Oh yes the Tuono V4 R is that good, but be careful and show it some respect when riding on public roads.2011 Aprilia Tuono V4R APRC Positives:2011 Aprilia Tuono V4R APRC Negatives:What is APRCThe APRC suite equipping the Tuono V4 R includes: Tuono V4 R APRC is a bike with two personalities, with two distinct display modes – Road and Race – to cater for even the most exacting rider.