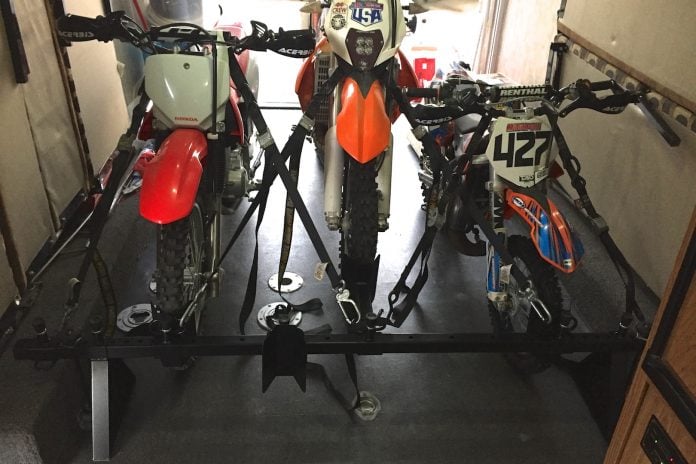 In the modern digital age, a “hack” is generally defined as a clever or elegant solution to a nagging problem. The phrase “There’s a hack for that” seems to be a common expression nearly synonymous with saying “Get with the times, man!”Well, I’m pleased to say that I’ve discovered a hack for transporting motorcycles that has increased my overall quality of life measurably—the Bolt It On Rack System for transporting motorcycles.

We’ve all experienced our fair share of trials and tribulations when it comes to loading and hauling motorcycles, especially when venturing beyond the truck bed to an enclosed trailer or toy-hauler.The aptly named toy hauler has become a popular way to transport dirt bikes, while simultaneously dragging along your mobile estate. By featuring fold-up furniture and a large rear door that doubles as a loading ramp, a toy hauler provides for motorcycle storage directly in the camper itself, freeing up the truck bed for firewood and other essentials, and eliminating the need to disconnect the truck from the trailer upon arrival.Sounds like the perfect transport solution, right? Well, almost. Put yourself in this scenario:It’s early Friday afternoon before a three-day holiday weekend and you’ve left the office a little early to beat city traffic with hopes of rushing home to hook up the toy hauler and embark on a long-awaited family motorcycle weekend.Timing is critical, so you’ve asked your wife to constantly monitor Waze to deliver blow-by-blow traffic and route updates to ensure an on-time arrival. Your kids are in the backseat surrounded by snacks and physically wrestling over the iPad, while the baby is crying because he’s been restrained in the car seat for too long amid all of the chaos. All you can think about is the shoddy menagerie of tie-downs, laid-over bike stands, and gear bags you used to haphazardly secure the motorcycles in the back of your toy hauler.Of course, without being able to see your precious two-wheeled cargo while you’re pulling the enclosed toy-hauler, it becomes a mental game of poker—bluffing yourself that your mess will hold together until you arrive, but knowing that you really have a losing hand and should mitigate the severity of the situation, pronto. Your better judgment temporarily intervenes and you decide to make an ill-timed pit stop on the side of the freeway to take a peek, for better or for worse.Praying that you and your rig do not get rear-ended, you make your way back to the toy hauler door. Before you can even reach for the handle, you already hear the audible beep from the CO2 alarm, meaning only one thing—a fuel spill. There is at least one bike down, maybe more.You open the door to discover your failed web of tie-downs in a heap on the floor. To your horror, all four motorcycles lying flat as pancakes. To make matters worse, the fuel vapor is so thick you can hardly breathe. As you turn to run out the door, you notice two holes punched through the interior wall from wayward handlebars and additional holes in the floor. 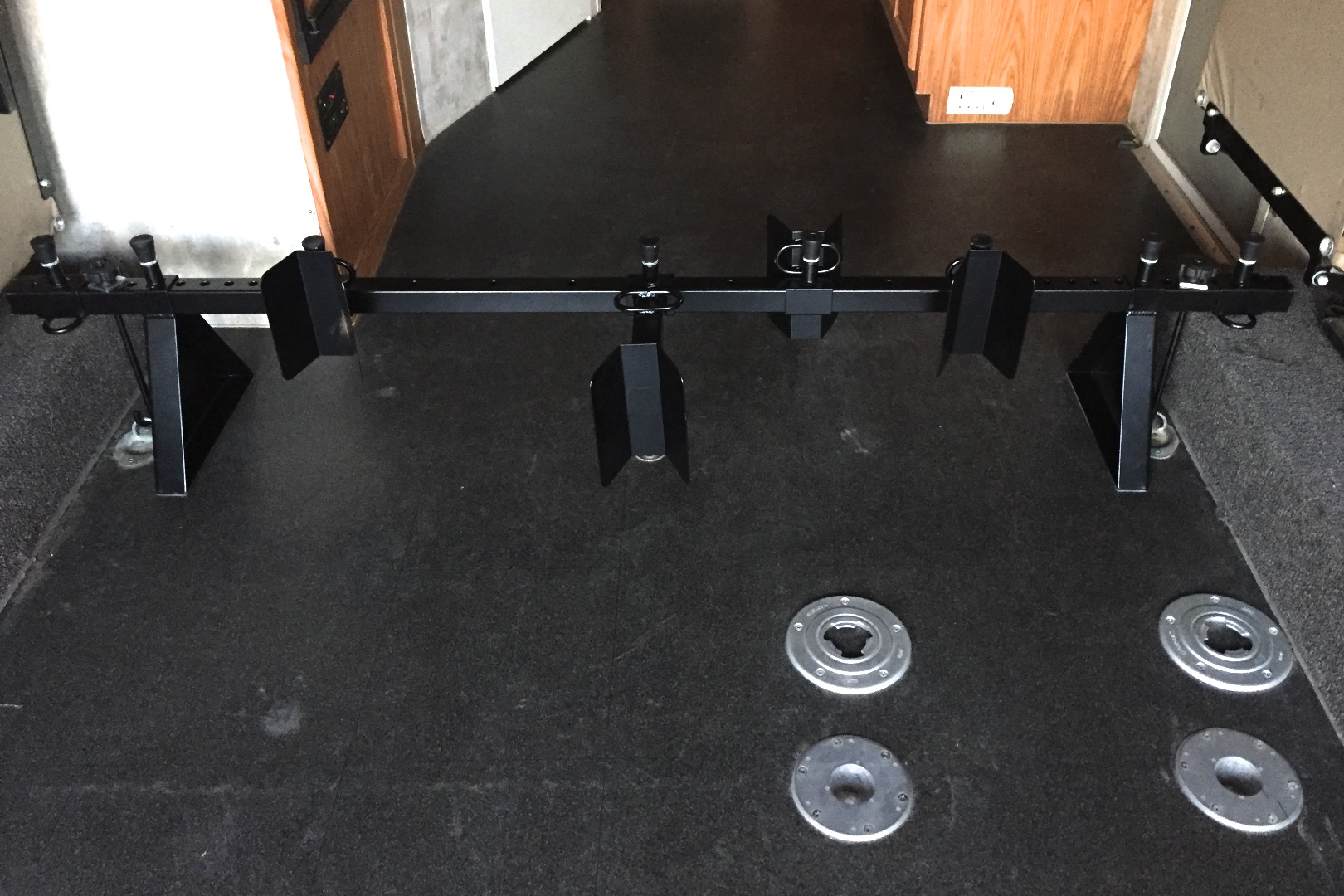 As you’ve probably surmised by now, this is a true story. It happened to me. I was completely at fault and, unfortunately, it’s a day that my family will never let me forget. There’s got to be a better way!The folks at Bolt It On have hacked this problem and created a completely practical and fail-safe way to transport your precious two-wheeled beauties. Bolt It On founder Scott Corgiat realized the obvious—RV manufacturers are not designing cargo areas specifically for motorcycles.Instead, they provide a series of D-rings in the floor and it’s up to the purchaser to formulate a way to securely Spider-man their bikes in an upright position without causing any collateral damage. This typically takes at least four tie-downs per bike, and is a crap shoot at best.The Bolt It On Rack System is essentially a powdercoated steel bar that utilizes two J-hooks looped through the D-rings in the RV floor to secure it down. Motorcycle wheel chocks can be configured on either side of the bar and tie down anchor points can be positioned to maximize effectiveness.Corgiat’s team delivered an 80-inch bar with two regular wheel chocks and one extended chock on one side of the bar, and a fourth wheel chock on the other. This configuration will accommodate three bikes on one side and a fourth bike on the other, facing the other three. Depending on the particular RV floor plan, one Bolt It On Rack System can accommodate as many as eight motorcycles.Assembly instructions were clear and concise and Bolt It On has plenty of pictures on Instagram for those of us who are visual learners. Either way, assembly and configuration are straightforward and intuitive.Securing the rack to the floor of the RV takes less than 90 seconds—just turn a knob to tighten the J-hooks on the D-rings. Unexpectedly, you don’t actually bolt on the Bolt It On Rack System, and that’s part of the beauty of it. 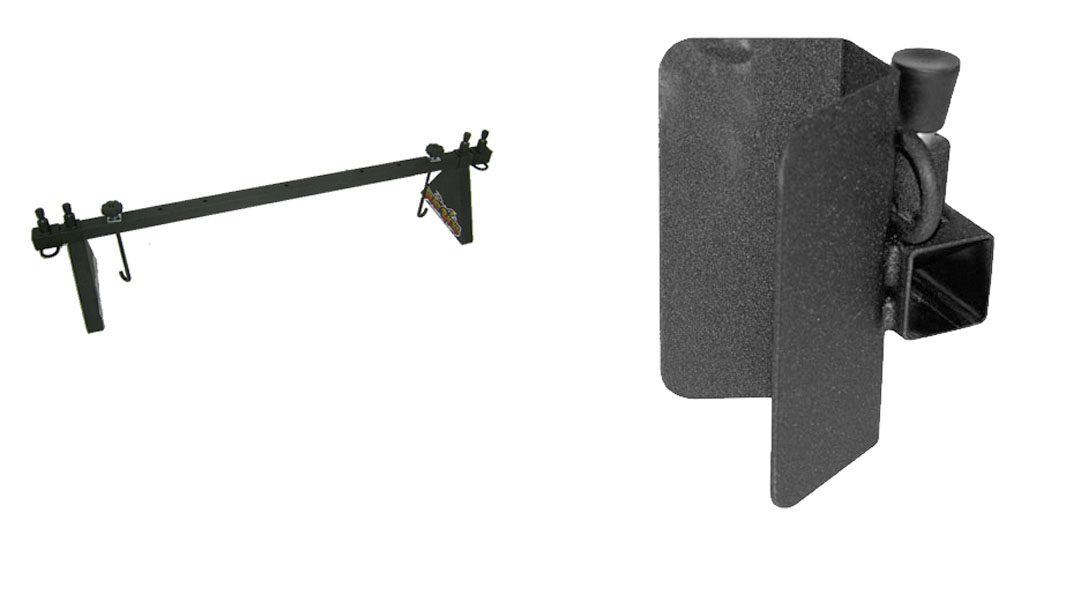 Every dirt bike has its own wheel chock and dedicated tie-down hooks. Loading and securing the motorcycles to the Bolt It On Rack System is much quicker and easier than loading up the truck bed for a day ride. Upon arrival, reverse the process to remove the rack for storage, either inside the toy hauler towards the rear or outside underneath the rig.According to Corgiat, there is a truck bed version in the works, and perhaps even color-options for those diehards that want to match their favorite team color. Currently, there is a sport bike version, as well as a Bolt It On Rack System for cruisers, up to and including full dressers. There’s also a version for vans.It’s not often that a product comes along that makes so much sense that you wonder how you ever got along without it. The Bolt It On Rack System for motorcycle transport system should be standard equipment directly from the RV dealer—it’s that essential.Bolt It On Rack System Prices