Ducati Team’s Andrea Dovizioso took the win at the 2018 MotoGP Grand Prix of Qatar. It wasn’t easy for Dovizioso, who withstood a last-corner pass by reigning MotoGP World Champion Marc Márquez on his Repsol Honda.Monster Yamaha Tech 3’s Johann Zarco, who shattered the pole record, led 16 of the 17 opening laps before suffering tire problems and dropping to eighth place in the final five laps. Valentino Rossi of Movistar Yamaha MotoGP filled out the podium.1. Andrea Dovizioso was the favorite, but he made it hard on himself. Starting fifth on the grid, Dovi promptly dropped back to ninth place. Moving up to seventh by the end of Lap 1 of 22, Dovizioso saved his tires early, passing just two riders—Dani Pedrosa and Cal Crutchlow—in the opening 10 laps. Dovi then engaged with Márquez for second place after passing Valentino Rossi.Márquez and Dovizioso were inseparable for the rest of the race, even as the jointly passed Zarco in the first corner of Lap 18. Márquez stayed close the rest of the way and passed Dovizioso in the final corner, but Dovi dove underneath Márquez and used the Ducati’s superior horsepower to beat Márquez to the finish line by less than three one-hundredths of a second. It was Dozi’s first win at Qatar and follows three consecutive second-place finishes. 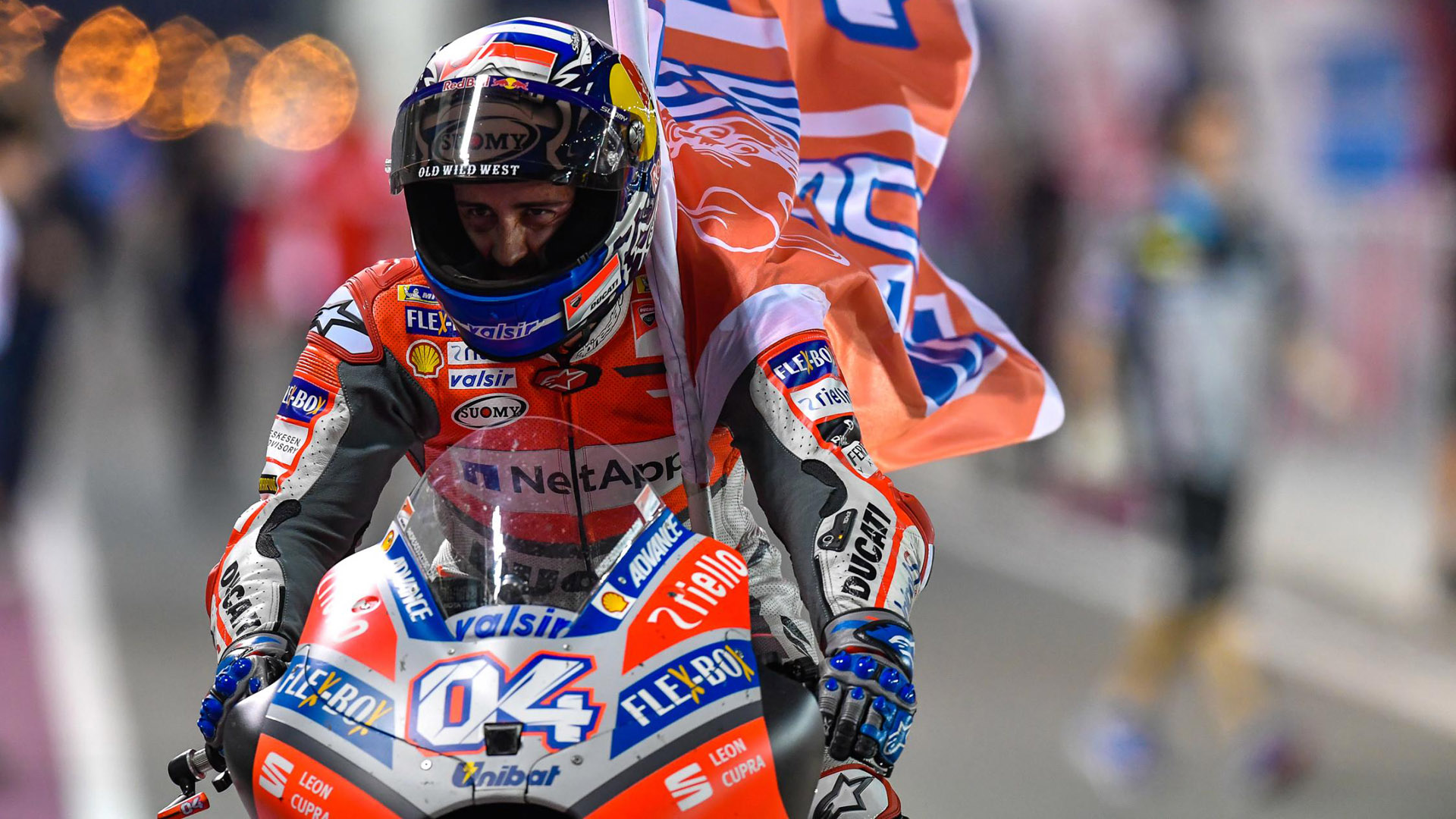 Winner Andrea Dovizioso2. Losail International Circuit is not a strong track for Marc Márquez, yet he just missed winning. Qualifying on the first row, four-time MotoGP World Champion Márquez ran near the front most of the race, including beating Zarco to the finish line on the Lap 1. Competitive for the win the entire race, Márquez never finished a lap farther back than third place. Leading briefly early in the race, and for a moment in the final corner, Márquez made the most of a race he was not expected to win, with his hard compound front tire helping him go the distance.

Dovi and Marquez — it was this close.
3. After extending his contract for two years, Valentino Rossi celebrated with a Qatar podium. Despite trailing six riders in the Fastest Lap category, Rossi rode consistently to third place. Starting on the third row of the grid, Rossi got a strong start and was in fourth place on Lap 1.Rossi had a bit of a mid-race fade, as he dropped to fourth place behind Zarco, Márquez, and Dovizioso. With Zarco’s tire problems, Rossi easily inherited third on Lap 18. Rossi kept Dovi and Márquez in sight, but never seriously challenged for the win. However, had Dovizioso and Márquez come together in the final corner, Rossi was close enough to steal the win. As it was, he was just less than eight-tenths of a second behind the two leaders at the end. It was a strong start to the season for the seven-time MotoGP World Champion.4. It was a what-if round for last year’s Qatar winner Maverick Viñales. Viñales qualified a dismal 12th and dropped back to 15th place on Lap 2 on his Movistar Yamaha. Despite his horrific start, Viñales began putting in lap times competitive with the leaders. Still, Viñales didn’t crack the Top 10 until Lap 13 when Jorge Lorenzo and Alex Rins crashed. Viñales then picked off Jack Miller (Lap 14) and Andrea Iannone on the next lap before making the long trek to the seven-rider leading pack. Once Viñales caught the lead group, he passed Pedrosa and Zarco on Lap 20, before finishing less than seven one-hundredths of a second behind fifth place Danilo Petrucci. 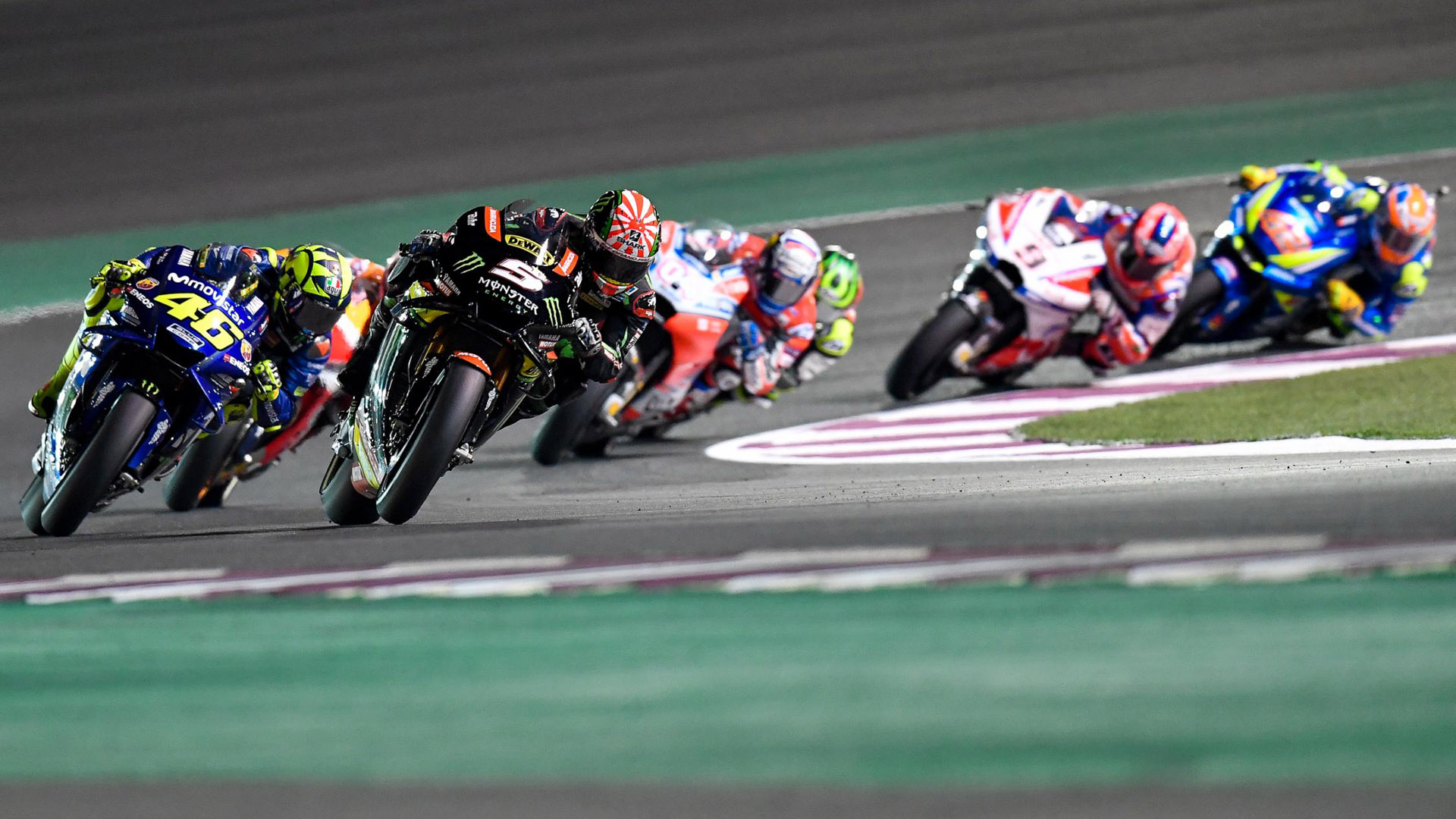 Zarco leads
5. Johann Zarco led 16 of 17 laps from the pole before his tires deserted him. Last year, Zarco led the opening laps at Qatar before crashing out in the lead. This year, Zarco remained upright, leading on Lap 17. However, his tires went off in spectacular fashion. He dropped three places on Lap 18, and lost three more spots on Lap 21 when he was passed by Petrucci, Viñales and Pedrosa.6. Cal Crutchlow led the satellite teams—just one spot off the podium—with Danilo Petrucci right behind him. Crutchlow and Petrucci were next to each other virtually the entire race. Alma Pramac Racing’s Petrucci led LCR Honda Castrol’s Crutchlow for the opening seven laps, as they battled for fifth early before passing Pedrosa in tandem on Lap 4 to begin their battle for fourth. The pair was pushed back a spot when Dovizioso stormed by both on Lap 8, and they regained their spots when Zarco dropped back. Petrucci lost touch with Crutchlow near the end of the race, finishing in fifth place, just less than a second behind Crutchlow.7. Two rookies—Franco Morbidelli and Hafizh Syahrin—scored points. Reigning Moto2 Champion Morbidelli turned his 14th spot on the grid into a 12th place at the end of the race on his EG 0,0 Marc VDS Honda. Morbidelli ran in either 12th or 13th place every lap, gaining a spot on the final lap when Alexis Espargaró dropped from 11th place to 19th place. Syahrin, a late addition to the MotoGP milieu on the Monster Yamaha Tech 3 racebike, became the first Malay to start a MotoGP race and score points. Running as far back as 17th place early, Syahrin took advantage of attrition to move up the leader board. 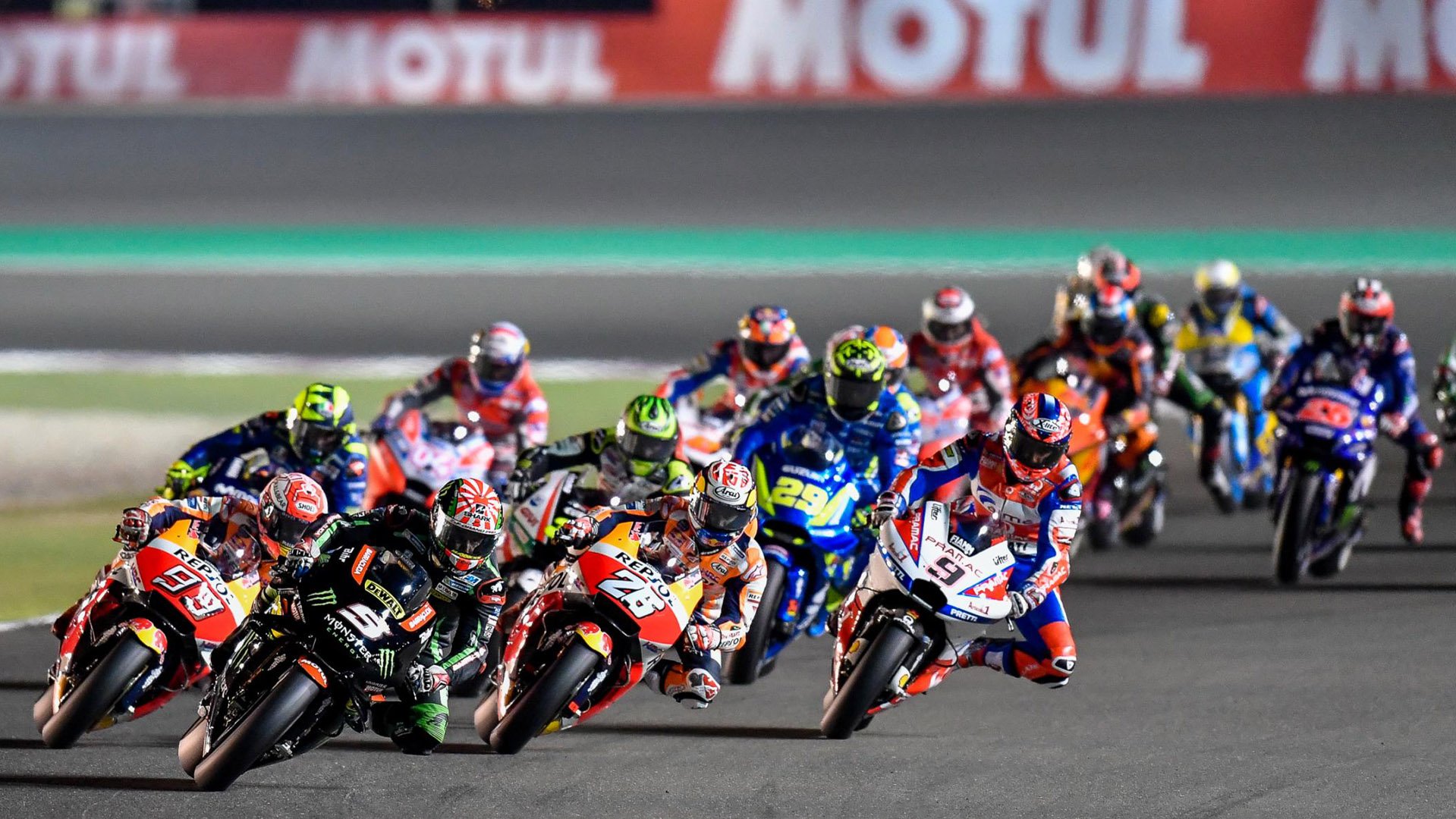 Opening lap
8. It was a tale of two races for crashers Jorge Lorenzo and Alex Rins. Team Suzuki Ecstar’s Rins started from the second row and ran in the lead group before his Lap 13 crash while running in seventh place. Lorenzo qualified ninth and promptly dropped back to 13th place on the opening lap. Three-time MotoGP World Champion Lorenzo had worked his factory Ducati up to 10th place when he had a brake failure on the same lap as Rins.9. KTM and Aprilia struggled at Qatar. Of the two factory teams, the top finisher was 18th place Bradley Smith on the Red Bull KTM. Alexis Espargaró was running in 11th place, until issues forced him back to 19th place on the final lap on his Aprilia Racing Team Gresini bike.Photography courtesy of MotoGP