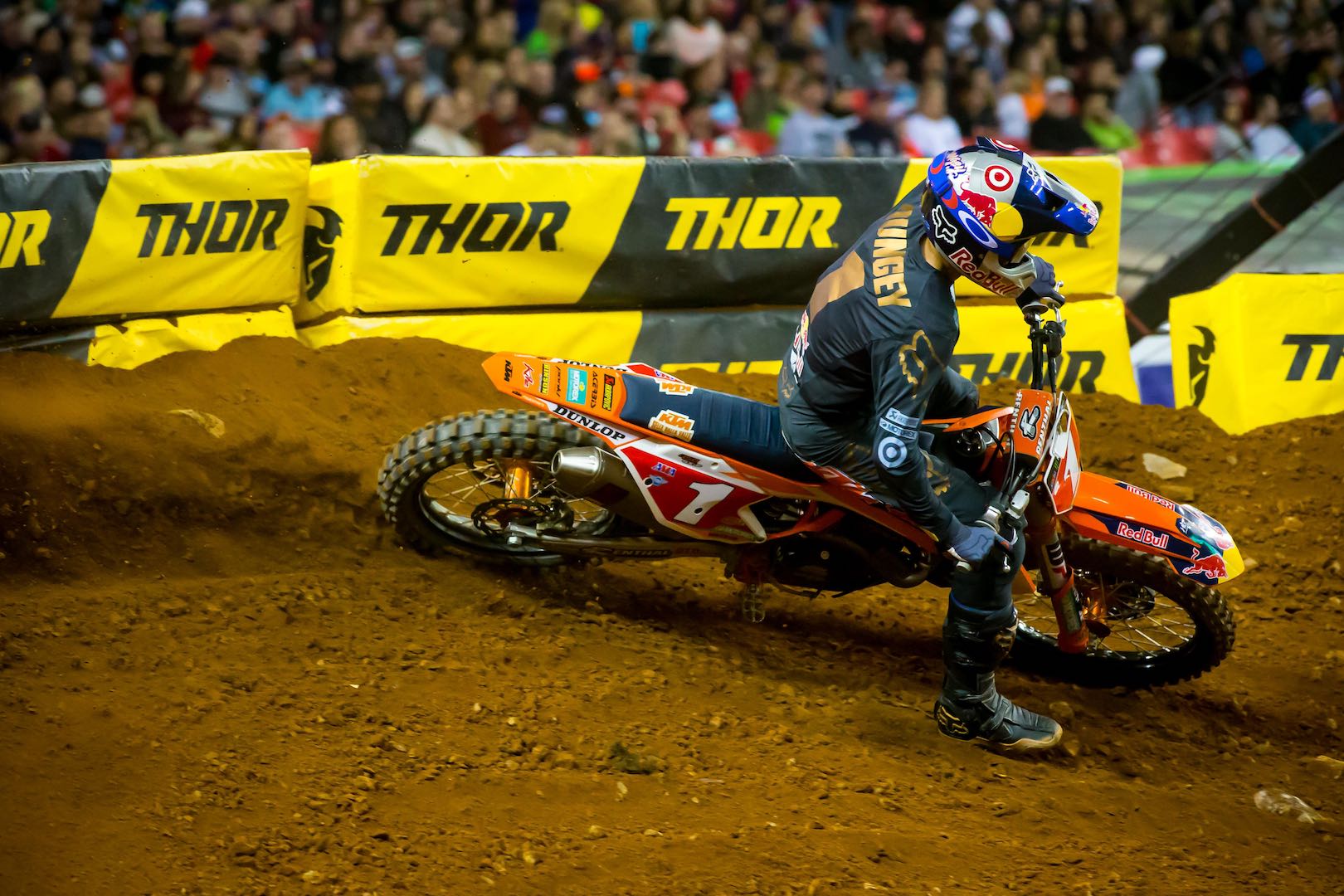 In 2006 at the age of 16, Ryan Dungey joined the pro ranks of motocross racing. The Minnesota native, who raced #5 throughout his career, quickly got up to speed, and began claiming titles in 2009.Nine AMA championships later, and just over a week after claiming his third-straight AMA 450SX Championship for four total, Dungey announced his retirement from professional motorcycle racing. The retiring announcement arrived during a press conference hosted Tuesday by KTM at Angel Stadium in Anaheim, Calif.The Red Bull KTM Factory Racing 450 SX-F pilot’s last race was round 17 of the 2017 Monster Energy Supercross championship at Las Vegas’ Sam Boyd Stadium held on May 6.Throughout his SX and MX career, Dungey raced Suzuki RM-Z and KTM SX-F machinery. He was with Suzuki until 2012, when he joined Roger de Coster on the Red Bull KTM team and claimed four 450SX titles.Dungey, now 27, has won nine AMA Supercross and Motocross Championships:Additionally, Dungey has helped Team USA claim three Motocross des National Championships (2009, 2010, 2011).Dungey also had some fame off the track; he became the first motocross rider to ever appear on a box of Wheaties, and claimed two ESPY Awards for Best Male Action Sports Athlete in 2015 and 2016. Dungey’s retirement is already creating headlines across the industry–a situation similar to when Monster Energy Kawasaki’s Ryan Villopoto retired at 26-years old in 2015.Here’s what Dungey had to say about his retirement at the press conference:“It’s hard to believe that this day has come but after a lot of thinking and praying over the last several months, today I announce my retirement from racing professional Supercross and Motocross. This decision has not been an easy one. I’ve achieved more than I ever could have imagined or dreamed of and for all of this I am incredibly humbled and honored,” Ryan Dungey says.“I’ve gone as hard as I can for as long as I can but the reality is that our sport is tough, the seasons are long and it takes a huge amount of sacrifice, hard work and discipline to stay on top. Physically I feel that I’m in the best shape of my life, race craft-wise I’m in the best shape of my life and I have the equipment to win, there’s no doubt about that. However, this year I have struggled mentally. I have always raced because I love it and want so badly to win, but this season was just different for me.“Getting my head into the game each week just wasn’t the same and lining up and being able to focus like I always had in the past was just different. I never thought I would get to a place where I had to talk myself into starting a race but that’s how it was for me – and the truth is that bothers me a lot. I could easily take the paycheck and just race to finish but that’s not who I am and not how I want to race, nor be remembered. I said on the podium in Las Vegas a week and a half ago that this championship win meant the most out of all my Supercross titles because the truth is, I had to fight the hardest for this one. Not necessarily because of the battles on the track, though those were good and tough, but because I had to mentally push myself like never before to get it done. And to come out on top and hold onto the championship title for the third year in a row is an unbelievable blessing that I’m incredibly proud of.“I love racing and I love our sport but I just feel it in my heart that I am ready to step away now – happy, healthy and feeling totally blessed. I’ve accomplished everything that I set out to do and so much more. Although I’m taking a step back from racing, I still plan to be involved in the sport and continue to try to make it better in any way that I can. This sport has blessed me beyond belief and I’ll forever be grateful for the memories I’ve made and friendships I’ve developed along the way. As this chapter of my life comes to a close, I’m excited to see what the next chapter has in store for me.” 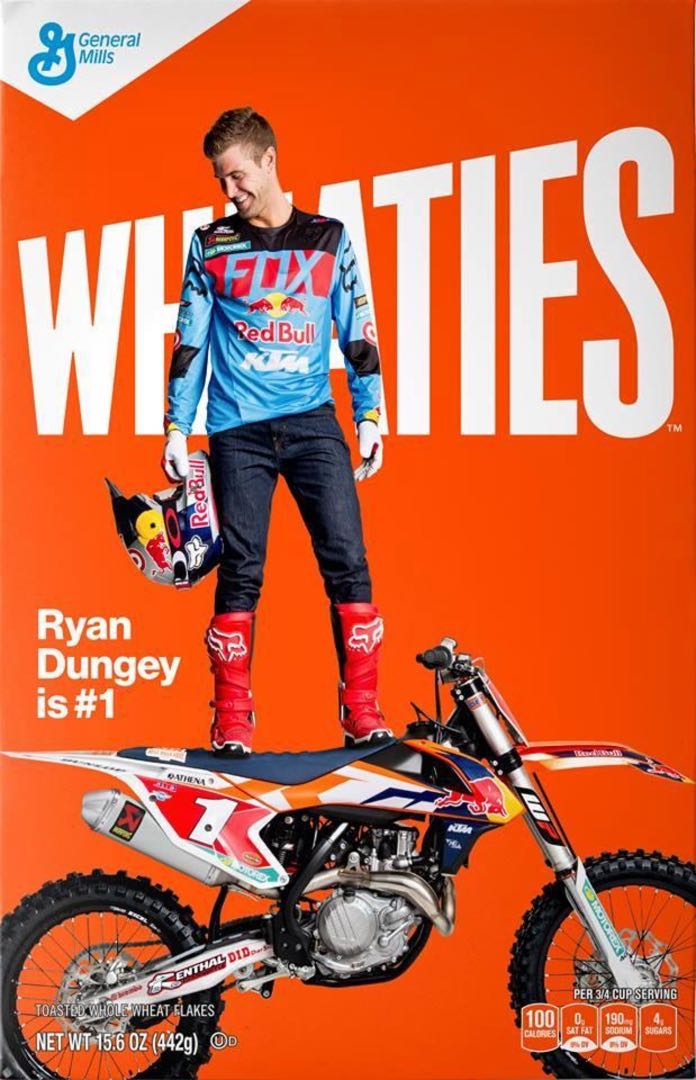 Stefan Pierer (CEO KTM GROUP), also responded: “For six years Ryan has been a part of the KTM family, beginning in 2012 when he came to KTM following Roger De Coster. Since then, Ryan has written a very important part of our history and together with Roger they brought KTM to the pinnacle of the sport worldwide. Ryan is outstanding. His performance and his personality brought KTM to the next level and we thank him for that. We are wishing him all the best for the next step and we are very happy to look for his next ambitious goals in the KTM family.”Pit Beirer (KTM Motorsports Director) said: “First of all I would like to congratulate Ryan for this amazing 2017 Supercross title. It was a tough fight but at the end he took the title home to our KTM family and it just makes us really, really proud. It’s nice for our Company to work with an athlete like Ryan, who brings always 100 percent for the brand. Ryan made history for KTM – he won the first Supercross race for us and the first Supercross title, and together with the U.S. team they’ve been the game changers. I’m looking forward to working with Ryan in the future to keep our first-class team on the same position and look for young riders, which I’m sure he will give us the right hand.”Roger De Coster (Red Bull KTM Factory Racing Team Manager) had the final word: “It has been an honor to work with Ryan for over ten years together. In that time he never failed to end a championship on the podium and I can say that I have never worked with a rider who took his job so seriously. This is the end of an era but we know Ryan will stay involved with our team although it is not completely defined yet. He has already begun helping Marvin prepare for the Nationals and we are excited to continue our relationship with him. We wish Ryan and Lindsey all the best for their future.”