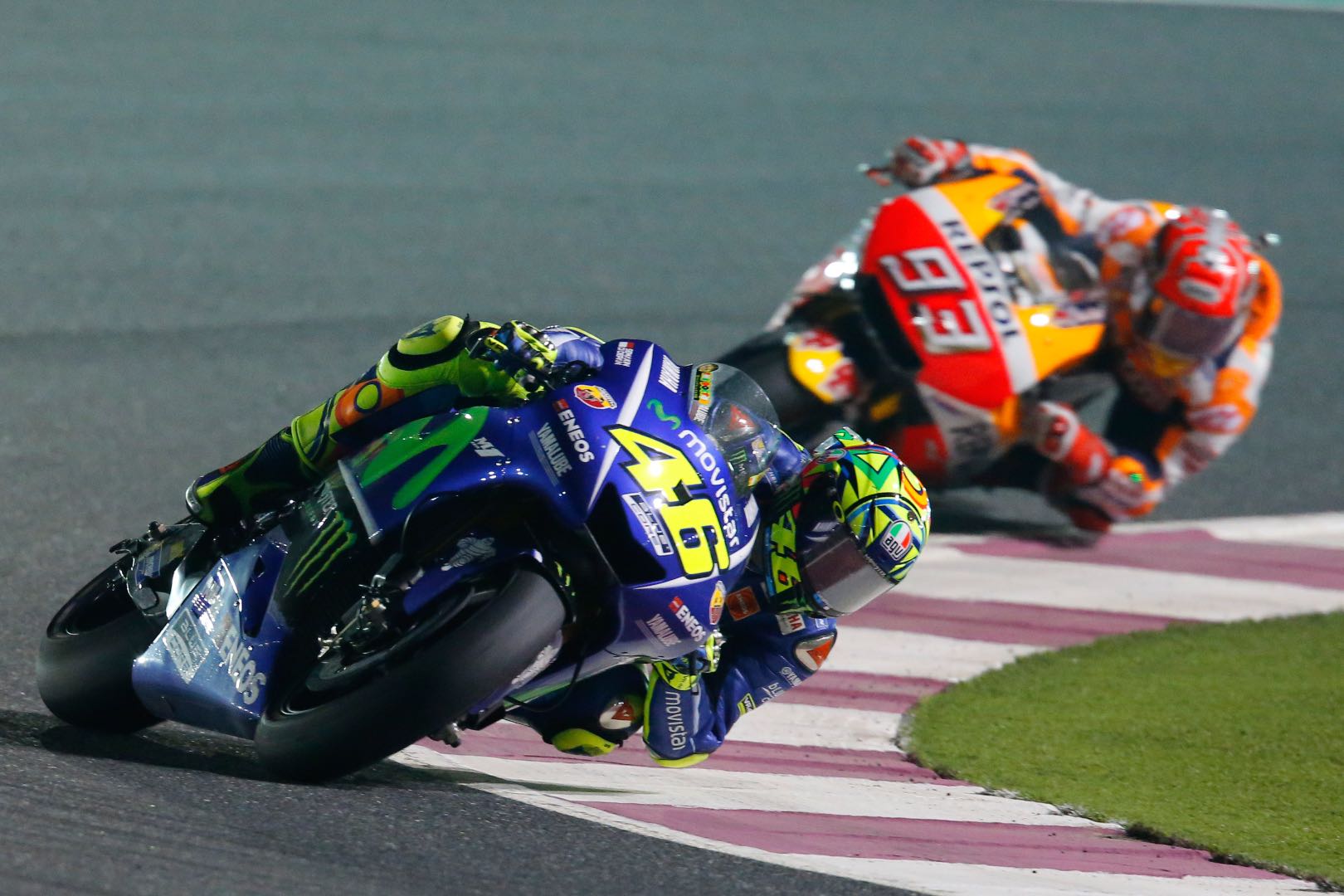 Spoiler Alert: results from the 2017 MotoGP season opener at Losail International Circuit in Qatar listed below.Exclusive photos will be uploaded soon…The season opener of 2017 MotoGP under the floodlights at Losail International Circuit in Qatar was plagued by rain.  Saturday qualifying was canceled due to standing rain puddles on the circuit, and reflections from the floodlights, and Sunday’s race was delayed before it was shortened from 22 to 20 laps.Due to the cancellation of Saturday Qatar MotoGP qualifying, the 23-rider grid lined up based on combined free practice results. This provided the man who led all preseason tests, Yamaha newbie Maverick Vinales, the pole ahead of Team Suzuki Ecstar’s Andrea Iannone and the reigning MotoGP Champion, Repsol Honda’s Marc Marquez.The 22-year-old Movistar Yamaha MotoGP YZR-M1 pilot Vinales again made the headlines Sunday after winning his first MotoGP victory for Yamaha, and the second of his premier-class career.The Spaniard didn’t have a runaway victory; he fought hard with teammate Valentino Rossi and Ducati Team’s Andrea Dovizioso. Vinales finished 0.461 of a second ahead of “Desmo” Dovi, and 1.928 seconds ahead of Rossi, who impressed after starting in 10th.“I feel incredible and it shows in the results,” Vinales says. “We did a great job during the whole weekend and we started good in the test, then in FP1 we were already feeling really good. The race was difficult, it started to rain and there was a bit of confusion because we didn’t know what to do.“The first laps were very challenging, the track was so slippery and I wanted to take it easy and stay calm. I knew I had a good pace, so I tried to push at the very end of the race. There were many crashes at the front, so I waited for the right moment and finally we took the victory.“The feeling when I crossed the line was incredible. As the first victory with Yamaha, it was even more important than the first MotoGP victory, because there was so much pressure. We were leading all the test, ‘You can do it,’ and finally we did, so I’m happy how I handled the pressure and also that the team worked really good. The electronics were ready and the grip of the tires was really good on the last laps.“The third sector was honestly so crucial, because Andrea [Dovizioso] used the soft tires, so he collected the benefits and could accelerate better all the time and he didn’t waste the tire, so it was hard to beat him, but in sector three I was really strong the whole weekend.“I set my best sector three on the last lap and it was the minimum to take the victory, it’s really great, I’m so happy. I hope for a perfect start in Argentina. The start here was good, but I just went outside of the line and when Zarco came he crashed into me, so I had to pick up the bike and then Marquez and Dovi passed me so it was a bit chaotic on the early laps, but then I was able to concentrate. We have to continue like that and maintain this concentration.”When 2017 Qatar MotoGP began, Team Suzuki Ecstar GSX-RR pilot Andrea Iannone got out front, but was soon passed by the reigning Moto2 Champion Johann Zarco (Monster Yamaha Tech 3). The Frenchman held the lead for six laps, followed closely by Marquez, Iannone and Dovizioso.But on lap six, Zarco crashed out, allowing Dovi to take the lead. The Italian Dovizioso was followed closely by Marquez and Iannone, but the Suzuki newbie Iannone crashed out on lap 10. Heading into lap 11, Marquez, Vinales and Rossi began chasing down Dovizioso out front.By lap 14, Vinales got out front, and was challenged heavily from Dovizioso and Rossi. Vinales and Dovi traded the lead a few times, but Vinales showed serious corner speed aboard the YZR-M1, beating Dovi’s GP17. Vinales was comfortably in the lead for the final two laps, finishing nearly a half of second ahead of Dovi, and nearly two seconds ahead of Rossi.Marquez finished fourth, followed by teammate Dani Pedrosa and Aprilia Racing Team Gresini’s Aleix Esparagaro, which was a historic top-six finish for Aprilia. Rounding out the top 10 were Octo Pramac Racing Ducati’s Scott Redding, Marc VDS Honda’s Jack Miller, Team Suzuki Ecstar’s Alex Rins, and Zarco’s teammate, Jonas Folger.As for three-time MotoGP Champion Jorge Lorenzo, the new Ducati Team rider finished 11th, over 20 seconds off the pace. He was followed by three Ducati prototype: Reale Avintia Racing’s Loris Baz and Hector Barbera, and Pull&Bear Aspar Team’s Karel Abraham.Besides Zarco and Iannone, three other riders crashed out: Octo Pramac Racing Ducati’s Danilo Petrucci (lap six), Pull&Bear Aspar Team Ducati’s Alvaro Bautista (13th lap) and LCR Honda’s Cal Crutchlow (16th lap).Though he crashed, Zarco set a new fastest lap time of 1:55.990 on lap four. The Circuit Record, a 1:54.927, set by Lorenzo last year on the Yamaha, remains.With his win, Vinales holds the lead with 25 points after one of 18 rounds, Dovizioso follows with 20 points, Rossi with 16, and Marquez with 13.The 2017 MotoGP Championship breaks for two weeks before heading to Termas de Rio Hondo in Argentina.Photo by Luciano Bianchetto