Roger Lee Hayden is an American road racer and his name shouldn’t be unfamiliar to anyone who loves racing – he’s the brother of 2006 MotoGP Champion Nicky Hayden and Tommy Hayden.Out of the Hayden trio, he’s the youngest and has competed in World Superbike, AMA SuperBike and even completed a few wild card races in MotoGP. We caught up with Roger Lee at round eight of the MotoAmerica series at Mazda Raceway Laguna Seca. It was a big weekend for the Hayden family; WSBK ran in conjunction with MotoAmerica, meaning both Hayden brothers were out on track.Currently, Roger Lee Hayden is a factory rider aboard the Yoshimura Suzuki GSX-R1000.

Ultimate MotorCycling: You guys have been having a really good run this year in contrast to previous seasons, especially against the new Yamaha YZF-R1. Both you and Toni Elias have been getting consistent podium. What are some of the changes that went into this year’s program to help you be more competitive?Roger Lee Hayden: Technically, if you look at the last six races of last season, I lost them by less than a half of second. So, we’ve been right there, you know? I mean, there was a red flag at Indianapolis and a couple other things that didn’t help us but when you talk about missing out by tenths of a second, it’s a totally different conversation.Last year we were able to find a few things at the end of the season, and I came in after the off-season as motivated as ever and really attacked every test, everything actually. I was getting the most out of the bike and that created problems. We’d fix one problem and then introduce another one. The Yoshimura Suzuki team is great though, they’re always on the dyno looking for power and things like that. This is a real team, we don’t hide information from each other, and we work together collectively to try to get that next level. We wanna beat Yamaha, we’re tired of it; the fans want us to beat them but nobody wanted to beat those guys more than us (laughs).UM: I wanted to touch on some of the new riders that have come into MotoAmerica this year, guys like Toni Elias, Claudio Corti, just to name a few; what are you picking up from those guys and what do you think you’re imparting onto them?RLH: I think it’s good for the series – it shows you were the series is at now. Three or four years ago, some of those guys probably wouldn’t have come here at all. It helps us because fans and organizers in Europe know how good a rider like Toni Elias and Claudio Corti are. It shows where we all stack up in terms of skill.For the top riders, it shows that a rider like Toni Elias was going to come over here and dominate. I think a lot of people thought that and not that he hasn’t done great but it helps show where our field is at. 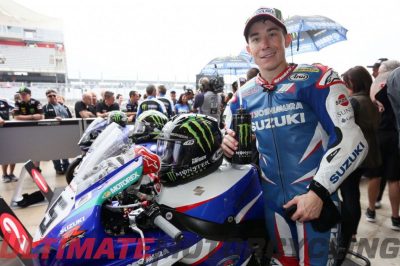