Seventy-two days ago, Swiss endurance rider Urs “Grizzly” Pedraita set out from Daytona International Speedway aboard his Victory Cross Country Tour. The goal was to circumnavigate the world in less than 120 days and as of July 10, 2016, Grizzly completed this – he smashed the standing record with a shocking 72-day finish.Those who followed him on the parade lap around Daytona International Speedway back on March 12 waved Grizzly on his way. But nobody expected how fast he’d be achieve his goals.In that time, Grizzly racked up more than 47,390 miles before he checked into Volusia Motorsports in New Smyrna Beach, Fla. Grizzly’s record is impressive – the previous record stood with 120 days lapse, which included time-stops for flights transfers. Grizzly was able to complete the entire trip, with time-stops for flights in 119 days and 21 hours.Visit the Ultimate MotorCycling Touring PageWe’re suckers for traveling, hence why we love this story. Even more impressive is the mileage he was collecting between stops. Let’s take a look at what he did while out on the road. From Daytona Beach, Fla., he traveled 3,971 miles in six days and 14 hours to complete his first leg into Panama City, Panama.Then Grizzly traveled south 6,269 miles for another nine days and 23 hours, turning the key off in Ushuaia, Argentina. Then he backtracked 2,088 miles to Santiago, Chile where he put his beloved Victory Cross Country Tour in the cargo bay and got some much needed rest on the flight to Australia. In the outback, he spent six days and five hours riding 4,604 miles across the continent, beginning in Sydney and coming to rest in Perth.Hopping a flight from Perth to Cape Town, South Africa, Grizzly then spent the next 13 days traveling north, 7,509 miles into Cairo, Egypt. He then took a ferry across the Mediterranean to Tarragona, Spain, riding 5,447 miles across northern Spain and into Gibraltar to North Cape, Norway. 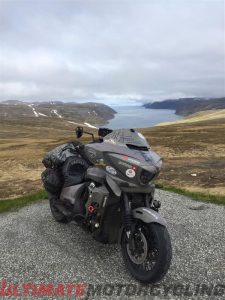 To the east he traveled once more, through St. Petersburg, Moscow, Irkutsk and Valdivostok during the second longest leg of his trip; he completed 7,280 miles when on Russian soil. A quick 249 mile ride through South Korea and then Grizzly moved into Thailand and Malaysia for a combined mileage total of 2,989.Around that time, I’m sure Grizzly was feeling good; he was well past the halfway point of his journey and the end was in sight. After coming to rest in Malaysia, Grizzly jumped on another flight to Anchorage, Alaska, where he then hammered on home for 6,984 miles through the United States, finally ending where it all began, in Daytona Beach.“With this journey the spirit of the pioneers of the past was re-established,” Grizzly said upon his arrival. “There is no place for time-stops in this kind of adventure. This victory belongs to the team, and is dedicated to my brother and my guardian angel, Emelie from Peru.”All serious ADV and Iron Butt riders have some customization done to their bike – if not by choice than done by necessity. While Grizzly’s Victory Cross Country Tour wasn’t all that different from what you’d find on the showroom floor, he did have some choice additions made to it in terms of comfort for extreme travel. All of the work was done by Motostyling in Zurich.“This record is a testament to the durability, capability and dependability of our Cross Country Touring platform,” says Nate Secor, Marketing Manager for Victory Motorcycles. “Victory Touring owners love to roll back the miles. If you asked them, they’d likely say there’s a little bit of Grizzly in each of them when they’re covering ground during their own journeys.”Time and position measurement for Grizzly’s record-setting ride were done via GPS and satellite tracking. Timing was not stopped on overland routes (i.e., when waiting to pass a country border or when the rider is sleeping). However, timing was stopped for air and sea transfers between continents and restarted once the bike arrived on the new continent.Grizzly’s record had a close eye on it, with time and positioning kept in check via GPS and satellite tracking. As mentioned before, timing was halted while in transit to new countries via air and while he was taking a much needed rest. However, once his bike hit ground in the new continent, that timer began ticking away – so it served him well to be so kind and courteous to airport security and staff.Visit www.GrizzlyRaceTeam.ch for additional information about Grizzly’s travels. Learn more about Victory Motorcycles at VictoryMotorcycles.com or follow on Twitter, Facebook, YouTube and Instagram.